Background: Liver metastasis is common in patients with colorectal cancer (CRC), and is correlated with poor outcome. MicroRNAs (miRNAs) are small non-coding RNAs involved in cancer development and progression, but their role in CRC liver metastasis has not been extensively investigated.

Conclusions: We discovered a pCRC liver metastasis-specific miRNA panel including miR-377, miR-99b-5p, miR-200c and miR-196b-5p through intensive validation. These miRNAs may function as prognostic factors in patients with metastatic CRC.

Colorectal cancer (CRC) ranks as the third most prevalent cancer and the third leading cause of cancer mortality worldwide [1]. Liver is the most common site of metastasis. Even after resection of liver metastases, more than half the patients will not be cured due to relapse of liver metastases and emergence of other distant metastases [2, 3]. Therefore, it is critical to develop metastasis-specific molecular biomarkers for patients’ outcome prediction and treatment options.

MicroRNAs (miRNAs) are a class of endogenous, small (17–25 nucleotides), noncoding, single-stranded, evolutionarily conserved RNA molecules that regulate target gene expression by interfering with their transcription or by inhibiting translation. MiRNAs are known to be involved in the process of tumor cell growth, invasion and metastasis of CRC by regulating the expression of down-stream target genes [4–7]. Several studies reported that certain miRNAs were associated with CRC liver metastasis [4, 8–10]. For example, miR-181a and miR-200c promote liver metastases by inducing epithelial-mesenchymal transition in CRC [9, 10]. MiR-192 inhibits liver metastases by down-regulating the expression B-cell lymphoma 2, vascular endothelial growth factor A, and zinc finger E-box-binding homeobox 2 [4].

Herein, we report our metastasis-specific miRNA biomarker discovery approach which outlines the extensive miRNA difference between the primary tumor and paired liver metastasis specimens and validates newfound miRNA biomarkers in other independent cohorts of specimens. We also evaluated the correlation of the differential miRNAs expression profile with clinicopathological features and patient prognosis.

We firstly performed miRNA microarray analysis in two pairs of matched pCRC and liver metastasis frozen specimens. The basic clinicopathological characteristics of these two patients were well matched. We identified 13 microRNAs whose expression levels differed between pCRC and liver metastasis tissues with a fold-change of > 1.5. Among these miRNAs, seven (miR-513a-5p, miR-181a-5p, miR-182-5p, miR-613, miR-152, miR-644a and miR-550a-5p) were up-regulated and six (miR-192-5p, miR-506-3p, miR-99b-5p, miR-29a-3p, miR-27b-3p and miR-934) were down-regulated in liver metastasis tissues compared with pCRC tissues.

To explore the clinical significance of these liver metastasis-specific miRNAs, we further validated the correlation between microRNAs and clinicopathological characteristics. Three up-regulated miRNAs (miR-99b-5p, miR-377 and miR-200c) and one down-regulated miRNA (miR-196b-5p) in pCRC compared to liver metastasis tissues were analyzed. As shown in Table 3, increased miR-377 expression level was associated with advanced lymph node stage (p = 0.043). Likewise, decreased miR-99b-5p expression was positively correlated with perineural invasion in pCRC (p = 0.043).

Table 3: Relationship between the expression level of miRNAs in the primary tumor and clinicopathologic parameters in 48 colorectal cancer patients with liver metastases 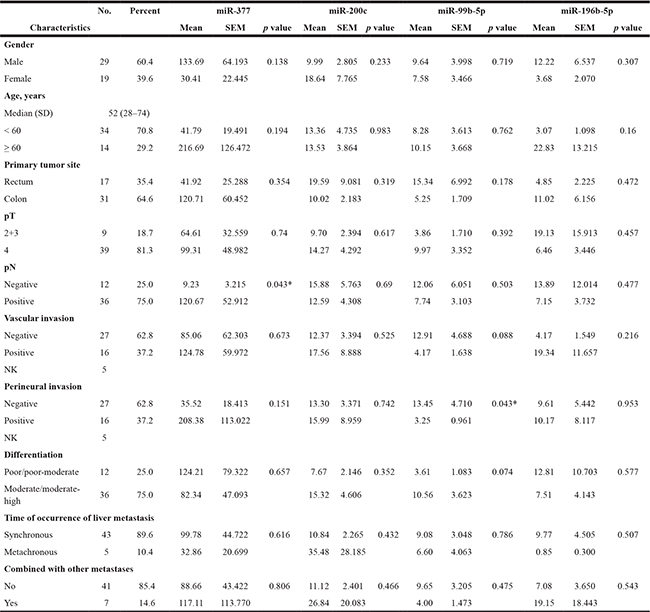 We tested the association between miRNA expression and overall survival by performing survival analysis. As shown in Figure 2 and Table 4, patients with elevated expression levels of miR-200c in pCRC and miR-196b-5p in liver metastases had significantly longer survival by Kaplan-Meier analysis (p = 0.048 and p = 0.02, respectively). Notably, higher expression of miR-99b-5p in pCRC also showed a better trend of survival, although statistical significance was not reached (p = 0.052). 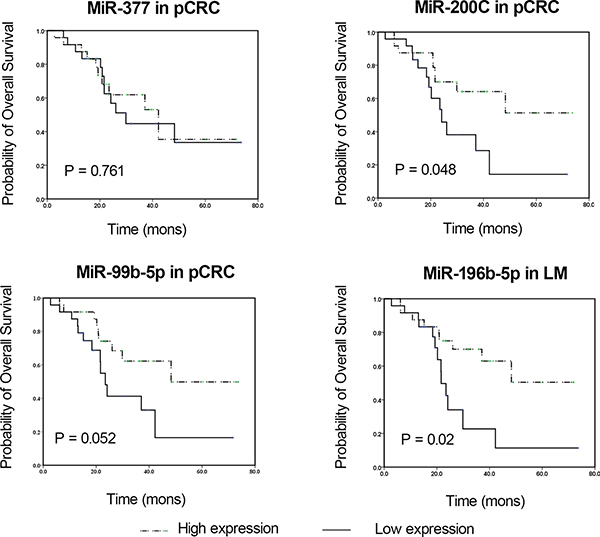 Table 4: Relationship between the expression level of miRNAs and overall survival in 48 colorectal cancer patients with liver metastases

Patients with liver metastasis in CRC were with a poor prognosis and early recurrence. Previous researches in the fields of molecular and genetic studies have contributed to our understanding of CRC liver metastasis in the cellular level [11, 12]. However, heterogeneity of research methods as well as tumor tissue acquisition limited the diagnostic and prognostic role of specific genes in metastases.

Recent findings have highlighted the role of miRNAs in the tumorigenesis of CRC cells acting as oncogenes or tumor suppressor genes [13, 14]. Similar studies have been performed to gain better insight into genomic changes involved in pCRC initiation and progression [15]. However, there are few studies of miRNA expression accounting for distant metastasis of pCRC. In this study, we aim to identify a differential microRNA expression profile in pCRC and their matched liver metastasis.

We previously demonstrated that miR-99b-5p is a tumor suppressing miRNA in metastatic CRC, and that its suppressive effects are mediated chiefly by suppressing mTOR expression [8]. MiR-196b was reported to be highly expressed in CRC tissues and was correlated with rapid progression and poor prognosis [16, 17]. MiR-196b was also a predictive factor in palliative chemotherapy and neoadjuvant radiochemotherapy [18, 19]. Similar to our findings, high expression of miR-200c was observed in liver metastasis [10] and its expression in serum was reported to be a prognostic factor in patients with CRC [20]. It has been found that miR-200c could mediate epithelial-mesenchymal transition in liver metastases by regulating the TGF-TGFegu signal pathway [21, 22]. MiR-377 was a novel biomarker for poor prognosis in gastrointestinal cancer, which induced tumorigenesis by targeting multiple tumor-suppressor genes [23].

Our study is distinct from previous studies in several aspects. First, we directly compared pCRC and matching liver metastasis tissues from the same patients, which avoid heterogeneity due to distinct miRNA from different patients. Second, to improve the predictive value of the miRNA markers, we developed a miRNA-based classifier panel rather than just suggesting each miRNA as a predictor.

In conclusion, four miRNAs (miR-99b-5p, miR-377, miR-200c and miR-196b-5p) were found to be differently expressed between primary tumors of patients with CRC and their matched liver metastases. Moreover, we nominate the candidate microRNAs, miR-200 and miR-196b-5p as potential prognostic markers. Our study suggested that these miRNAs could hopefully serve as metastasis-specific miRNA biomarkers for the management of patients with CRC.

The fresh-frozen/formalin-fixed, paraffin-embedded primary CRC and matched corresponding liver metastatic tissues were collected from 2004 to 2012 in the Department of Colorectal Cancer, Fudan University Shanghai Cancer Center. The tissue bank of the hospital stored the specimens. The study was approved by the Ethics Committee of Fudan University Shanghai Cancer Center and written informed consent was obtained from all patients.

The data were analyzed with SPSS version 18.0. The student t-test and one factor analysis of variance were used for analysis as appropriate. Kaplan-Meier method and log-rank test were used to estimate the survival. P < 0.05 was considered statistically significant.