Purpose: To assess the biological variability of clinical meaningful molecular markers and their clinical correlations in Chinese patients with colorectal cancer (CRC).

Materials and methods: In this prospective observational study, frequencies and clinico-pathological features of RAS and BRAFV600E mutations, deficiency of DNA mismatch repair (dMMR) were evaluated in patients with colorectal cancer staged I-IV. The molecular heterogeneity between right-sided and left-sided colorectal cancers was studied in our series by classifying patients with different mutations and dMMR status.

Conclusions: By assessing the mutations and clinical correlations of RAS and BRAF genes, and dMMR status, similar RAS mutation, dMMR frequency and lower BRAF mutation was observed in Chinese patients compared to western patients. A distinct molecular heterogeneity was found between patients with right-sided and left-sided CRCs.

Colorectal Cancer (CRC) is a significant cause of cancer-related morbidity and mortality globally. It is the third most common malignancy in China, and the incidence and mortality rates are continuing to rise in recent years. It has been recognized that colorectal cancer is a biologically heterogeneous disease. The carcinogenesis and development involve distinct pathways, which may result in inactivation of tumor suppressor genes and DNA mismatch repair (MMR) genes or activation of oncogenes [1, 2]. In recent years, with the improved understanding of molecular tumor characteristics, the management of patients with colorectal cancer is changing rapidly. Currently it is possible for clinicians with identified distinct molecular patterns, to make more accurate predictions of prognosis and also treatment response. This progress in understanding molecular changes in colorectal cancer has improved our understanding of the disease and led to more personalized management.

Among the heterogeneous genetic alterations in colorectal cancer, the rat sarcoma viral oncogene (RAS) mutation, V-raf murine sarcoma viral oncogene homolog B1 (BRAF) mutation and DNA mismatch repair deficiency (dMMR) are the main molecular phenotypes studied most extensively and widely applied in clinical circumstances. The molecular features and association of MMR, RAS and BRAF mutations in colon cancers with prognosis have been reported in previous studies. Although the majority of CRCs show chromosomal instability, approximately 15% of cancers develop via an alternative pathway characterized by defective function of the MMR system. These CRCs are known as dMMR tumors, whereas most CRCs have proficient MMR (pMMR). Colon cancers with dMMR have distinct clinical and pathological features, including tumor site, differentiation, treatment response and survival, etc. The Kirsten rat sarcoma viral oncogene (KRAS) mutation status in codon 12 or 13 of exon 2 has been reported in approximately in 40% of patients with metastatic CRC, and recognized as a predictive marker of resistance to EGFR-targeted antibodies in colorectal cancers. Recently, studies have shown that other KRAS (exon 3 or 4) and NRAS mutations are present in another ~11% of patients, and also associated with resistance to anti-EGFR therapy [3]. BRAF mutation occurs in 5-10% of patients with mCRC with V600E as a hot spot. However, most of reported studies are based on patients in western countries. The possibility that CRC biology differs across races has been suggested by data from population-based studies. To date, data are still lacking in Asian patients with colorectal cancer. Moreover, frequencies of RAS or BRAF mutations were mainly reported in patients with metastatic disease, while dMMR was mainly reported in patients with localized disease. It is important to study the molecular heterogeneity combining all stage patients and compare the difference between Asian and Western patients to establish a more comprehensive molecular profiling of CRC.

In this study, we evaluated the frequencies and clinic-pathological characteristics of RAS mutation, BRAF mutation and DNA mismatch repair expression in Chinese patients with sporadic stage I-IV colorectal cancers, and studied the molecular heterogeneity of patients with different tumor site.

Of the 400 enrolled patients, 29.5% of patients presented with synchronous metastases, and 31 patients (7.8%) with locally advanced rectal cancer underwent preoperative chemoradiotherapy. The clinicopathological characteristics were shown in Table 1.

We detected dMMR in 31 (7.75%) by IHC analysis for MMR proteins expression. Of the 31 dMMR cancers, 29 cases were found to have either loss of MLH1 or MSH2 protein expression; 3 cases had loss of MSH6 expression, all accompanied by loss of MSH2 expression; 5 cases had loss of PMS2 expression, which were accompanied in 3 cases by loss of MLH1 expression. The prevalence of dMMR status was 12.6% (28 patients) of 223 patients with colon cancer, while only 3 (1.7%) out of 177 patients with rectal cancers were detected dMMR status. 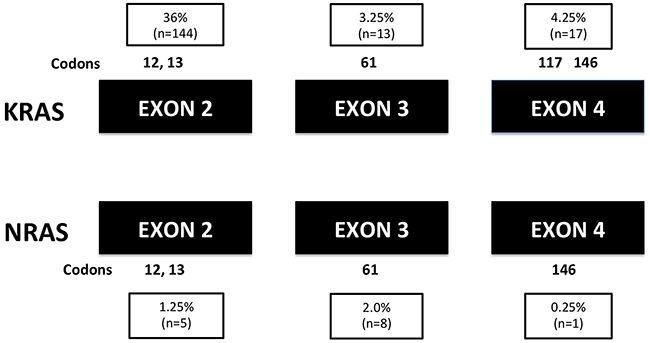 Figure 1: The mutant exons and codons of all RAS mutations (n=400).

Figure 2: The frequency (%) of RAS mutation by A. primary tumor site and B. distant metastases.

Figure 3: The molecular heterogeneity of patients with stage I-IV CRCs in right-sided (A, n=101) and left-sided (B, n=299) primary tumors.

In the current study, we assessed the mutation of RAS genes and BRAF gene, dMMR and their clinical correlations in 400 Chinese patients with stage I-IV colorectal cancers. A remarkable molecular heterogeneity was also found between patients with right-sided and left-sided CRC.

MMR deficiency is most commonly caused by epigenetic inactivation of the MLH1 gene in sporadic CRCs, and the remainder of dMMR tumors are associated with Lynch syndrome that is caused by germline mutations in MMR genes. Deficiency in DNA repair capacity due to silencing of MMR genes gives rise to the accumulation of abnormalities in short sequences that are repeated up to hundreds of times within the genome (microsatellites). The phenotype is characterized by right-sided location, mucinous cell type and presence of tumor infiltrating lymphocytes. In our study, we also confirmed similar clinicopathological characteristics of colon cancer with dMMR in Chinese patients with sporadic CRCs.

It has long been reported that there are differences in patients’ demographic, clinico-pathological features and tumor biology between right-sided and left-sided CRCs [18, 19]. Until recently, analysis of several prospective clinical trials and population-based study proved that these differences could translate into different clinical prognoses [20–22]. In the FIRE-3 study, Heinemann et al. reported significant survival superiority in KRAS wild-type metastatic CRCs with left-sided primary tumors, compared to right-sided primary tumors [22]. The CALGB/SWOG 80405 study reported no significant difference in overall survival and progression-free survival when patients with KRAS wild-type metastatic CRC were treated with bevacizumab or cetuximab, both in combination with leucovorin/fluorouracil/oxaliplatin (FOLFOX) or leucovorin/fluorouracil/irinotecan (FOLFIRI) [23]. However, retrospective analysis of the CALGB/SWOG 80405 study found that the median survival was significantly longer in patients with left-sided primary tumors than that of right-sided primary tumors. Moreover, the sidedness of the primary tumors seemed to have translated over into different treatment responses to targeted therapy [20]. Data from a population-based study also confirmed that right-sided stage III and IV CRCs had significantly inferior prognoses compared to left-sided CRCs [21]. Although these findings haven’t changed our current treatment strategies, it indicated that the side of primary tumor might be a surrogate for biological variability across the large bowel, which can also be explained by the different embryonic origins of right-sided colon and left-sided colon and rectum. In our series, by studying several crucial molecular markers in colorectal cancer, we found significant molecular heterogeneities between right-sided and left-sided CRCs. The frequencies of dMMR, RAS mutations and BRAF mutation were all more commonly detected in right-sided CRCs than left-sided CRCs. Furthermore, CRCs patients were divided into five groups with these clinical markers, and a great difference of molecular heterogeneity was clearly observed In the Pie Charts comparing right and left-sided CRCs.

There were limitations of our study. The survival outcomes haven yet to be obtained, and so any correlation between the molecular heterogeneity and patients’ survival remains unknown. The limited case numbers is another limitation to the detailed analysis of differences betwee different stages. However, our study further confirms the biological variations of CRCs between different races.

This study was reviewed and approved by local Institutional Review Boards. All patients gave informed consent for the use of their cancer tissue blocks for molecular analyses.

The IHC assay for the MMR proteins expression was performed using the fully automated BenchMark ULTRA platform (Ventana Medical Systems, Inc., Tucson, Arizona, USA) using a comprehensive panel of four primary antibodies, including MLH1 (M1), MSH2 (G219-1129), PMS2 (EPR3947) and CONFIRM MSH6 (44) antibodies (Ventana Medical Systems, Inc., Tucson, Arizona, USA). Nuclear staining of normal tissue next to the tumor or lymphocytes in the stroma served as internal positive controls. In tumors, dMMR was interpreted as follows - loss of an MMR protein (MLH1 or MSH2 or PMS2 or MSH6) expression was defined as the absence of nuclear staining of tumor cells. Each slide was examined by at least two experienced pathologists.

Our study assessed the mutation of RAS genes and BRAF gene, dMMR and their clinical correlations in Chinese patients with colorectal cancers. Similar RAS mutation and dMMR frequencies were found in Chinese patients as compared to what has been observed in Western patients, while the frequency of BRAF mutation was lower in Chinese patients. A distinct molecular heterogeneity was found between patients with right-sided and left-sided CRCs. Future studies are required to further understand the mechanism of this biological variability.

We greatly appreciate our research nurses, Zhuzhu Qian and Jin Gao, at Department of Colorectal Surgery of Fudan University Shanghai Cancer Center for their excellent assistance.

This work was supported by the grants from Science and Technology Commission of Shanghai Municipality No.16411966300.