Background/Aim: The gamma-glutamyl transpeptidase-to-platelet ratio (GPR) is a novel serum model, which was reported more accurate than aspartate transaminase-to-platelet ratio index (APRI) and fibrosis index based on four factors (FIB-4) for diagnosing significant fibrosis and cirrhosis in HBV mono-infection in West Africa. We aimed to evaluate the diagnostic performance of GPR for liver fibrosis in patients with chronic hepatitis B (CHB) and non-alcoholic fatty liver disease (NAFLD).

Materials and Methods: 131 patients with CHB-NAFLD were included, and the diagnostic performances of GPR, APRI and FIB-4 were compared by receiver operating characteristic (ROC) curves and the area under ROC curves (AUROCs).

Conclusions: The GPR could be used as a non-invasive marker to predict liver fibrosis and cirrhosis in CHB-NAFLD individuals.

Chronic hepatitis B (CHB), a disease caused by hepatitis B virus (HBV), is a leading cause for cirrhosis and hepatocellular carcinoma (HCC) [1]. Non-alcoholic fatty liver disease (NAFLD) covers a spectrum ranging from simple steatosis to steatohepatitis, and cirrhosis [2]. The prevalence of CHB is approximately 0.5% in the United States, 7% in China, and 10% in African countries [1]. The prevalence of NAFLD varies from 20% to 51%, depending on the study population [3]. The increasing prevalence of NAFLD has resulted in the increased coexistence of CHB and NAFLD. In developed countries, NAFLD was observed in 20% of CHB patients [4, 5].

The above-mentioned studies excluded conditions that might predispose to altered GGT or platelet counts, including excessive alcohol consumption, accompanied by NAFLD, co-infection with HCV, HDV or HIV, and so on [6]. Consequently, high diagnostic accuracy of the GPR may not be applicative in patients with such conditions. Some researchers have done studies to validate the diagnostic accuracy of the GPR in CHB patients with such conditions. For example, Boyd et al reported that in a French HBV/HIV co-infected cohort, the GPR showed reasonable performance for identifying significant liver fibrosis [9]. Stockdale and colleagues subsequently reported that the GPR shows poor correlation with FibroScan measurements of liver fibrosis in HBV/HIV co-infected patients in West Africa [10].

At present, few studies have evaluated the performance of GPR for the diagnosis of liver fibrosis and cirrhosis in patients with CHB and NAFLD (CHB-NAFLD). To fill this research gap, we evaluated the diagnostic performance of GPR for significant fibrosis, severe fibrosis, and cirrhosis in one hundred and thirty-one CHB-NAFLD patients, and compared with APRI and FIB-4 scores. 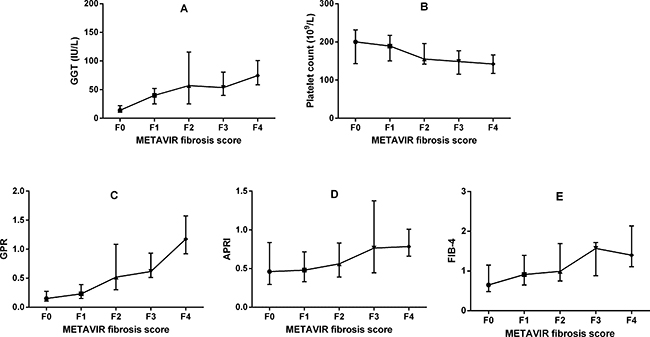 Diagnostic performances of noninvasive models for liver fibrosis and cirrhosis 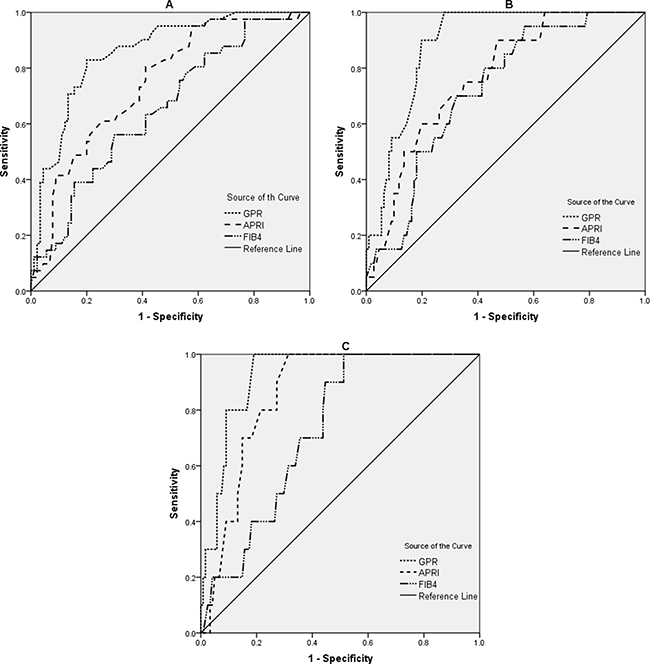 Diagnostic thresholds of noninvasive models for liver fibrosis and cirrhosis

In this study, we observed that the GPR had a higher performance compared to other commonly used models (APRI and FIB-4) for diagnosing significant fibrosis and severe fibrosis (all p < 0.05) in CHB-NAFLD patients. For the diagnosis of cirrhosis, no statistical difference was found between GPR and APRI (p = 0.104). This study indicated that the GPR, which shows application prospect in HBV mono-infection or HBV/HIV co-infection patients in West Africa, also could be used to identify significant fibrosis, severe fibrosis, and cirrhosis in CHB-NAFLD patients. In this study, the liver steatosis levels had no correlation with GGT, platelet count, and GPR, along with no correlation between steatosis and fibrosis, which might help explain why the GPR works in CHB-NAFLD patients.

It is important to note that the APRI threshold for the diagnosis of cirrhosis (> 2.0) recommended by the WHO HBV guideline was unsuitable in CHB-NAFLD population, such that none of the ten patients with cirrhosis were correctly identified. This implies that 100% of patients who had cirrhosis would be erroneously categorized as patients without cirrhosis by APRI > 2. In this study, the optimal cut-off of APRI is 0.55 to diagnose cirrhosis, and the corresponding sensitivity, specificity, PPV, and NPV were 100%, 69%, 21%, and 100%, respectively. Obviously, APRI > 0.55 is more appropriate for screening cirrhosis and selection of candidates for liver biopsy in CHB-NAFLD population. Compared with HBV monoinfection patients, the different magnitude of inflammation and related ALT levels observed in CHB-NAFLD patients, that might render the different APRI cut-offs. Two recent studies, showing different pathogenesis and different patterns of fibrosis according to different causes of chronic liver diseases, also justify the need for different cut-offs of systems for assessment of fibrosis from different causes [15, 16].

It is undeniable that this study has some limitations. First, there were few patients with F3 and F4 fibrosis (n = 20) and perhaps there was lack of power to determine a statistical difference between APRI and GPR AUROCs at the F4 level. Second, our study population, with higher prevalence of HBeAg-positivity and higher proportion of male, might not be fully representative of CHB-NAFLD patients. Third, we do not compare the performance of FibroScan to GPR because of the FibroScan measurements have not been promoted widely in China. Fourth, we do not compare the performance of FibroTest, Hepascore and FibroMeter to GPR because these models were protected by patents, and some laboratory tests which are necessary for the calculations of these models were not available in our hospital. Fifth, there is no external validation, and the predictive capacity of the GPR thresholds obtained in this study need to be further validated in other cohorts of similar study population.

Notwithstanding these limitations, we validate that the GPR could be used as a non-invasive marker to predict liver fibrosis and cirrhosis for CHB-NAFLD individuals, especially when compared with APRI and FIB-4. Certainly, we hope that further evaluations will be conducted in CHB-NAFLD patients more broadly.

Three hundred and fourteen consecutive patients with CHB and biopsy-proven fatty liver disease (defined as the presence of more than 5% steatosis of hepatocytes) who underwent liver biopsies and routine laboratory tests at Shanghai Public Health Clinical Center, Shanghai, China between May 2008 and January 2017 were retrospectively screened. CHB was defined as the persistent presence of hepatitis B surface antigen (HBsAg) for more than 6 months [17]. The fatty liver disease was considered to be non-alcoholic in origin if the clinical records indicated that the patient was felt to either be totally abstinent or to consume less than approximately 20 g of alcohol daily [18]. Patients with the following conditions were excluded: (1) alcohol consumption > 20 g/day (n = 121); (2) antiviral therapy history (n = 26); (3) co-infection with hepatitis C virus (HCV), hepatitis D virus (HDV), or human immunodeficiency virus (HIV) (n = 33); (4) accompanied by autoimmune liver disease (n = 3). Finally, 131 treatment-naïve patients with CHB-NAFLD were included. Figure 3 summarized the flow diagram of the study population. 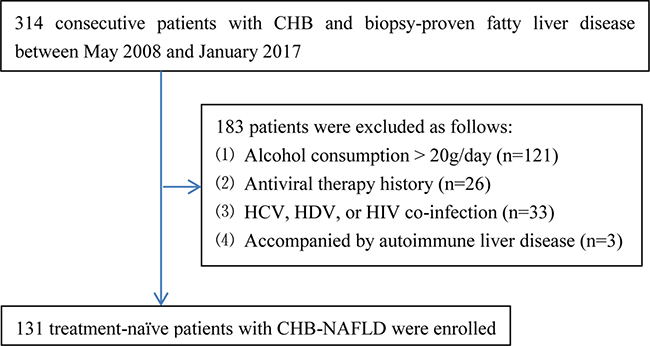 All patients signed the informed consent before liver biopsy, and all clinical procedures were in accordance with the Helsinki declaration of 1975, as revised in 1983. The study protocol was permitted by the ethics committee of Shanghai Public Health Clinical Center.

Liver biopsy was performed using ultrasound localization. Liver samples were formalin-fixed and paraffin-embedded. A minimum of 15mm of liver tissue with at least 6 portal tracts is considered sufficient for liver histological scoring. Liver histology was interpreted by two liver pathologists. In case of discrepancies, slides were reviewed by a third highly experienced hepatopathologist.

The authors declare no competing financial interests. The funding organizations are public institutions and had no role in the design and conduct of the study; collection, management, and analysis of the data; or preparation, review, and approval of the manuscript.

9. Boyd A, Bottero J, Lacombe K. The gamma-glutamyl transpeptidase-to-platelet ratio as a predictor of liver fibrosis in patients co-infected with HBV and HIV. Gut. 2016; 65:718–720.

14. World Health Organization. Guidelines for the Prevention, Care and Treatment of Persons with Chronic Hepatitis B Infection. 2015.