*These authors contribute equally to this work

Background: Suppressor of cytokine signaling (SOCS) 1 and 3 methylation have been associated with clinical features and outcomes of cancer patients. However, their roles in determining the treatment response to transarterial chemoembolization (TACE) in patients with hepatocellular carcinoma (HCC) remain unknown.

Materials and Methods: A total of 246 HCC patients receiving TACE were enrolled in this study. Tumor samples was obtained from echo-guided fine needle aspiration and genomic DNA from tumor samples was purified. SOCS1 and SOCS3 methylation status were detected using methylation-specific polymerase chain reaction. The treatment responses to TACE of patients were evaluated after procedure and all patients were followed for prognosis analysis.

Conclusions: This finding suggests that the presence of SOCS3 methylation is a marker to predict treatment response and prognosis in HCC patients receiving TACE therapy.

Hepatocellular carcinoma (HCC) is one of the most frequent cancers worldwide. Despite of the recent progress in diagnosis and treatment, the clinical outcome of HCC patients remains very poor [1–3]. Many patients lose timing for tumor resection due to late diagnosis. Transarterial chemoembolization (TACE) is a new technique of intra-arterial catheter-based chemotherapy that selectively delivers cytotoxic drug to the tumor bed combining with arterial embolization. For these patients not eligible for surgical treatment, TACE is currently considered as part of standard therapy [4, 5]. However, treatment response to TACE in individual patient varies widely. Although many efforts have been made, there are still no reliable markers to predict treatment response to TACE and prognosis in HCC patients.

Recent studies show that DNA methylation is one of major molecular mechanisms in carcinogenesis in liver. Increasing evidence reveals that HCC tumors exhibit specific DNA methylation signatures that are associated with major risk factors and tumor progression. Using methylation-specific PCR (MSP), some genes are identified significantly hypermethylated and some are downregulated in the HCC tumors compared to the non-tumor liver tissues [6]. Other studies show that the methylation status of some candidate genes is closely associated with HCC progression and prognosis [7–10].

Suppressor of cytokine signaling (SOCS) family is an important negative regulator of cytokine signaling and deregulation of SOCS has been involved in many types of cancer. Among SOCS family members (SOCS1-7), the role of SOCS1 and SOCS3 in are mostly studied. The roles of SOCS1 and SOCS3 in various types of cancer are still controversial. Some researchers found there increased expression of these two in tumor samples while the others reported reduced expressions, which make it hard to use the protein expression of these two for tumor maker [11–13].

SOCS3 gene has been reported to be hypermethylated in various types of cancers, including endometrial carcinoma, prostate cancer, Barrett esophagus carcinoma, and ulcerative colitis-related colorectal cancer [14–16]. The in vitro study reveals that SOCS3 methylation promotes cell growth in pancreatic cancer cell line [17]. Aberrant promoter methylation and loss of suppressor of SOCS1 gene expression was reported in uterine cervical carcinogenesis [18]. SOCS-1 hypermethylation is significantly correlated with lymph node metastasis and TNM stage in colorectal cancer [19]. The frequency of SOCS-1 methylation in HCC cancer tissues is significantly higher than in adjacent non-tumorous tissues and benign liver tissues, but no prognostic effect of SOCS-1 methylation was observed in HCC patients [20].

Table 1: SOCS1 and 3 methylation status and the clinical features and treatment response of HCC patients

Table 2: Identification of prognostic factors for overall survival in patients with TACE treatment

To determine whether SOCS1 and SOCS3 have a prognostic role in these patients after TACE treatment, we analyzed the overall survival (OS) status using Kaplan-Meier model and the 1-, 3-, and 5-year survival rates were calculated. Our results show that, the 1-year survival rates are similar between patients with/without SOCS3 methylaiton presence. However, the 3-year and 5-year survival rates are significantly different between these two groups (54.6% vs 38.5%, P < 0.001 and 36.5% vs.11.6%, P < 0.001, respectively). The median survival times of two groups are also dramatically different. HCC patients with SOCS3 methylation have a poorer prognosis than those without (median OS period: 22.5 vs. 29.7, months, P < 0.001, log-rank test, Figure 1A). However, no significant correlation was observed between SOCS1 methylation status and OS in HCC patients (Figure 1B). 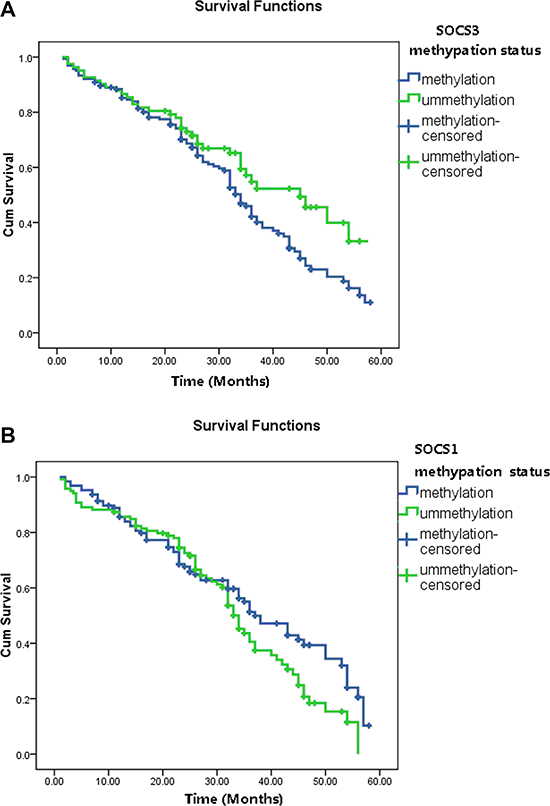 Furthermore, univariate and multivariate Cox analysis were performed to identify the prognostic factors for overall survival in patients with TACE treatment. As shown in Table 2, TNM stage, lymph node invasion, vascular invasion, serum AFP level, SOCS3 methylation as well as TACE response were screened as possible factors associated with the survival of HCC patients. Notably, multivariate analysis reveals that SOCS3 methylation status and TACE response, along with TNM stage and Vascular invasion, are identified as independent risk predictors for the poor outcome of HCC.

DNA methylation is the addition of a methyl group to the cytosine in CpG dinucleotides by DNA methyltransferase. This epigenetic mechanism is used by cells to regulate gene expression. Hypermethylation associated with silencing of SOCS proteins has been found in various cancers, including myeloma, melanomas, bladder, HCC, gastric and colorectal cancers [25–29]. Pierconti et al. found that the promoter of SOCS3 was methylated in 20 out of 51 (39.2%) prostate cancer patients, whereas all healthy controls and benign prostate hyperplasias were not methylated. SOCS3 methylation decreased mRNA level and significantly associated with a more aggressive behavior and worse prognosis in prostate cancer [30]. Similarly, in multiple myeloma patients, methylation of SOCS3 was found in 5 of the 70 cases but none in the control group [25]. Moreover, association of SOCS3 methylation with plasma cell leukemia, elevated LDH, and shortened survival (6.9 versus 56.1 months) was observed.

SOCS3 is known to inhibit cytokine signaling via Janus kinase (JAK)/signal transducers, activators of transcription [31], NFkB, and focal adhesion kinase (FAK) signaling pathways. Substantial data demonstrate the link between SOCS3 regulation of inflammation and its suppressor activity on tumor initiation and development [11, 32, 33]. In SOCS3 conditional knockout mice, deletion of the SOCS3 gene promoted carcinogen-induced hepatic tumor development through the activation of STAT3 and resistance to apoptosis [34]. In HCC patient samples, the expression of SOCS3 was reduced compared with surrounded non-HCC regions [34], and methylation silencing of SOCS3 accelerates cell growth and cell motility by promoting JAK/STAT and FAK signaling [35]. In line with these findings, our results showed that SOCS3 mRNA level in HCC tissues were significantly lower than adjacent non-tumor tissue. 65.8% of the tumor tissues showed hypermethylation, which was associated with tumor grade, TNM stage and distance metastasis, higher level of AFP, and poorer treatment response. Methylation silencing of the SOCS3 in HCC may result in survival cancer cells via upregulation of cytokine signaling pathways and resistance to apoptosis, which in turn lead to unfavorable response to TACE treatment.

More recently, hypermethylation of SOCS3 was shown to associate with a poor clinical outcome in HCC patients with HBV infection backgrounds but not that with HCV or no virus infection [36]. Interestingly, methylation was also observed in non-tumor tissues in HBV-related HCC patients even though with much lower intensity and frequency. However, no methylation was seen in non-tumor tissues of HCV infection-related HCC, indicating that methylation status of SOCS3 varies under different hepatitis viruses-induced HCC. While our study provided important information on the potential role of SOCS3 methylation on prognosis of TACE, subgrouping based on gender and/or virus infection background of HCC in the future study would be helpful to further our understanding on the mechanism underlying effects SOCS3 methylation in HCC and TACE treatment. Additionally, future study using larger sample size should be performed to further confirm our results.

Another member of the SOCS family, SOCS-1, displays hypermethylation and growth suppression activity through JAK/STAT pathway in HCC as well [37]. According to a meta-analysis, hypermethylation of SOCS1 was correlated to the risk of HCC [38]. In this study, we found SOCS1 methylation are correlated with tumor grade and TNM stage. However, no significant association was observed between SOCS1 methylation status and OS of HCC patients who received TACE treatment, suggesting a unique role of SOCS3 in SOCS protein family in the response to TACE.

Two major limitations should be addressed in this study. Firstly, we did not investigate the biological effect of SOCS3 methylation on HCC cell lines, thus the molecular mechanism underlying SOCS3 methylation affect HCC cell behavior, such as proliferation, migration, invasion, apoptosis et al, remains unknown. Secondly, the sample is relative small and only Chinese patients were enrolled in this study. In order to verify the conclusion of this study, future study with larger sample size and different ethical background is warranted.

We consecutively enrolled 246 patients receiving TACE procedure due to unresectable HCC at our hospital from May 2010 to May 2014. All patients were diagnosed with HCC by clinical examination, imageology and alpha-fetoprotein (AFP) examination, and further histologically confirmed by echo-guided fine needle aspiration biopsy. Patient’s information is collected from their medical records. The characteristics of the HCC patients are presented in Table 1. A written consent was obtained from all patients before enrollment in the study, and the Ethical Committee of our hospital approved the protocol, which was in accordance with the ethical guidelines of the 1975 Declaration of Helsinki.

All patients received TACE therapy by the Seldinger technique as described previously. Chemotherapy including Fluorouracil,, Mitomycin, Carboplatin et al, was implemented via super-selective cannulation to the target artery, injection of iodized oil mixture, and gelatin sponge embolism if necessary. All patients received a median of two treatments (range, 1–6 treatments) throughout the follow-up period [21].

We isolated genomic DNA from HCC tumor samples using DNeasy Blood & Tissue Kit (Qiagen, Germantown, MD, USA), followed by treatment with sodium bisulphite, which converts all unmethylated cytosines (C) to uracil (U). To analyze the methylation status, methylation-specific PCR (MSP) was performed using primer pairs specific for methylated and unmethylated DNA, respectively [23]. MSP distinguishes methylated from unmethylated alleles in SOCS1 or SOCS3 based on sequence changes (C to U) induced by sodium bisulfite. MSP-specific primers for SOCS1 [24] and SOCS3 [25] are listed in Table 3.

The χ2 test or Fisher’s exact test were adopted to determine the association between the SOCS1 and 3 methylation status and the clinicopathological features and TACE treatment response in HCC patients. The Kaplan–Meier analysis with log-rank test was used to analyze HCC prognosis and survival time. COX analysis using univariate and multivariate modes was used to determine the independent prognostic factor for GC patients. All of the statistical analyses were performed by GRAPHPAD PRISM software (GraphPad Software, Inc., San Diego, CA, USA) and SPSS (16.0). In all cases, a p-value of less than 0.05 was considered significant.

This study was supported by