Osteosarcoma (OS) is a prevalent cancer worldwide. MicroRNAs (miRNAs) play critical roles in the growth, invasion and carcinogenesis of OS, whereas the underlying mechanisms remain ill-defined. Here, we addressed these questions. We detected significantly higher levels of ZNRF2, a ubiquitin ligase of the RING superfamily, and significantly lower levels of miR-100 in the OS specimens, compared to the paired normal bone tissues. The levels of ZNRF2 and miR-100 inversely correlated in the OS specimens. In addition, low miR-100 levels are associated with poor prognosis of the OS patients. Either ZNRF2 overexpression or miR-100 depletion increased in vitro OS cell growth and improved cell survival at the presence of Doxorubicin. Mechanistically, with the help of bioinformatics analysis and luciferase-reporter assay, we found that miR-100 might bind to the 3’-UTR of ZNRF2 mRNA to prevent its protein translation. Thus, our data suggest that re-expression of miR-100 may inhibit OS cell growth and decrease OS cell chemo-resistance.

Osteosarcoma (OS) is the most prevalent malignant bone tumor, and is characterized by malignant mesenchymal cells that produce either osteoid or immature bone. Untreated OS may undergo a relentless course with disease progression and leads to death within months [1]. Surgical removal of the primary OS is still the basic treatment, while chemotherapy can either be administered before or after surgery [2]. Although the advances in chemotherapy have substantially improved the long-term survival of patients with OS, some OS are not sensitive to chemotherapy, which highlights the importance of understanding the mechanisms underlying the chemo-resistance of OS cells [3].

Doxorubicin (DOX), also called Adriamycin, is the first-line drug for OS chemotherapy. Besides well-known for its cardiotoxicity, DOX also suffers from the fact of being resistant by some OS cells [2]. Thus, it is important to figure out the mechanisms underlying the chemo-resistance of OS cells.

Protein synthesis requires participation of digested amino acids regulated by a molecule called mammalian target of rapamycin (mTor), a conserved serine/threonine protein kinase from the phosphatidylinositol 3-kinase -related kinase family [4–7]. The aberrant expression of mTor has been shown to be essential for the tumorigenesis of the majority of all cancers [8–11], including OS [12]. Recently, the membrane-associated E3 ubiquitin ligase ZNRF2 has been shown to be involved in the activation and regulation of mTor through protein interaction [13]. Moreover, ZNRF2 depletion has been shown to decrease cell size and cell proliferation [14]. However, the expression and regulation of ZNRF2 in OS is unknown.

MicroRNAs (miRNAs) are a group of small, non-coding RNAs [15–17]. Previous studies have demonstrated that aberrant miRNA expression affects normal bone homeostasis and metabolism, resulting in OS initiation and progression [18, 19]. Although a diverse role of miR-100 has been reported in different cancers [20–24], its effects on ZNRF2 expression specifically in OS has not been reported.

Here we reported significantly higher levels of ZNRF2 and significantly lower levels of miR-100 in the OS specimens, compared to the paired normal bone tissues. The levels of ZNRF2 and miR-100 inversely correlated in the OS specimens. Low miR-100 appeared to be associated with poor prognosis of the OS patients. Either ZNRF2 overexpression or miR-100 depletion increased in vitro OS cell growth and improved cell survival at the presence of Doxorubicin. Mechanistically, with the help of bioinformatics analysis and luciferase-reporter assay, we found that miR-100 might bind to the 3’-UTR of ZNRF2 mRNA to prevent its protein translation.

From the candidate ZNRF2-targeting miRNAs, we specifically found miR-100 as an interesting one, since in the resected 28 OS specimens along with the paired normal bone tissue (NT) (Table 1), we detected significant changes in miR-100 levels (Supplementary Table 1). Indeed, we not only detected significantly higher levels of ZNRF2 by Western blot (Figure 1A), but also detected significantly lower levels of miR-100 by RT-qPCR (Figure 1B) in the OS samples, compared to those in NT. Moreover, a significant inverse correlation was found between ZNRF2 and miR-100 levels in OS specimens (Figure 1C, r= -0.72; p < 0.0001). Next, we investigated whether the levels of miR-100 may correlate with 5-year survival of OS patients. The median value of miRNA the 28 cases was chosen as the cutoff point, after which Kaplan-Meier curves were performed, showing that miR-100-high OS patients had a significantly better survival (Figure 1D). Thus, decreased miR-100 in OS is associated with poor prognosis. 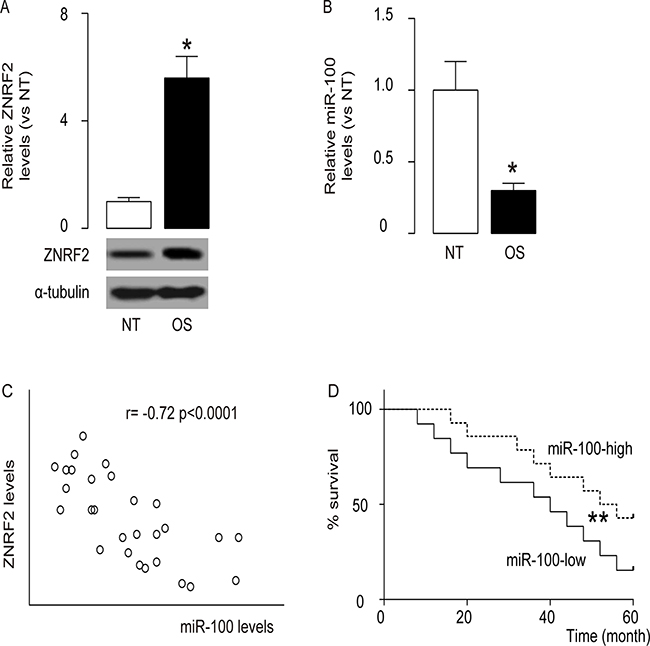 In order to understand the molecular basis of these clinical findings, a human OS cell line U2OS was used in the current study. We transfected the U2OS cells with either a ZNRF2 overexpressing plasmid (ZNRF2), or a small short hairpin interfering RNA for ZNRF2 (shZNRF2). The U2OS cells were transfected with a scrambled sequence as a control (scr). These plasmids all carried a GFP reporter for determination of the transfection efficiency and for transfected cell purification. Next, alteration of ZNRF2 levels in these cells was confirmed by RT-qPCR (Figure 2A), and by Western blot (Figure 2B). 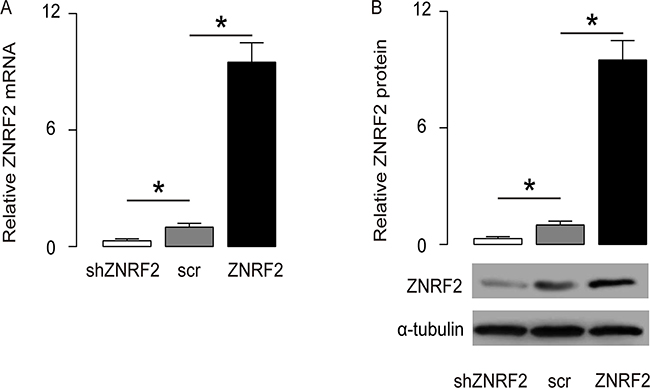 Figure 2: Modulation of ZNRF2 levels in OS cells. U2OS cells were transfected with either a ZNRF2 overexpressing plasmid (ZNRF2), or a small short hairpin interfering RNA for ZNRF2 (shZNRF2). The U2OS cells were transfected with a scrambled sequence as a control (scr). These plasmids all carried a GFP reporter to allow determination of the transfection efficiency and purification of the transfected cells. (A-B) The modulation of ZNRF2 levels in these cells were confirmed by RT-qPCR (A), and by Western blot (B). *p<0.05. N=5. 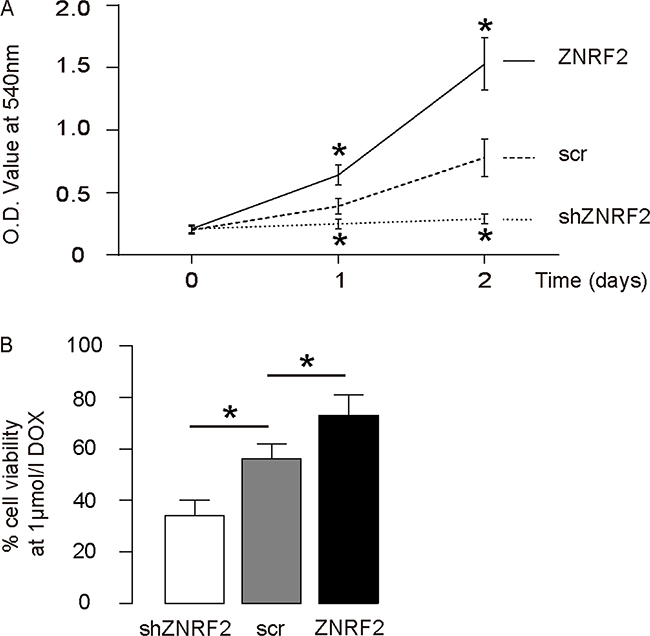 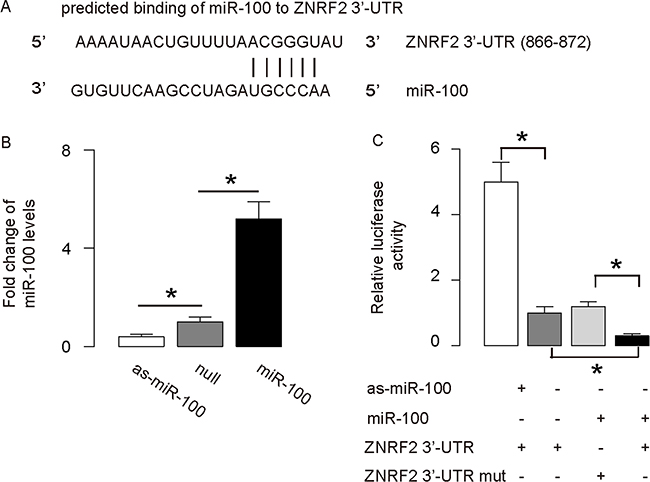 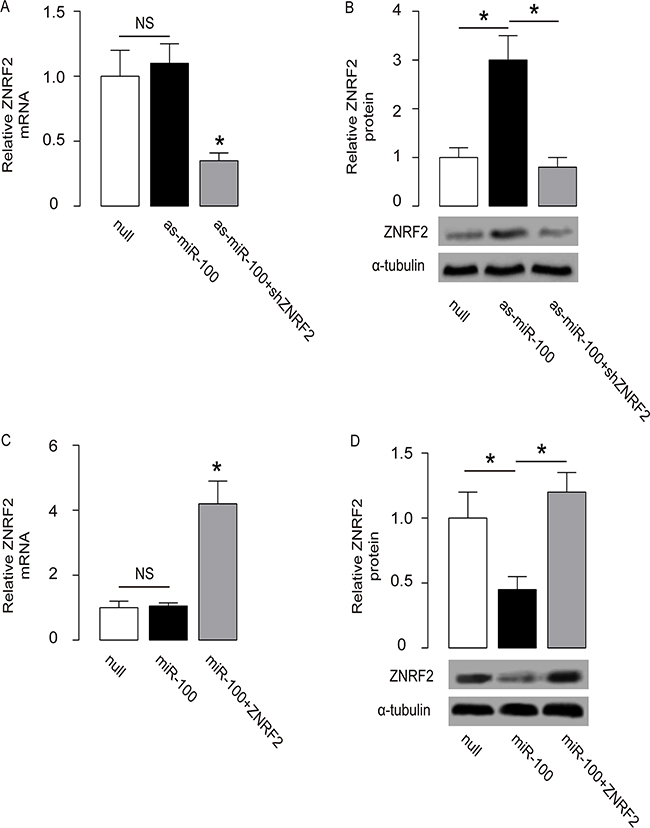 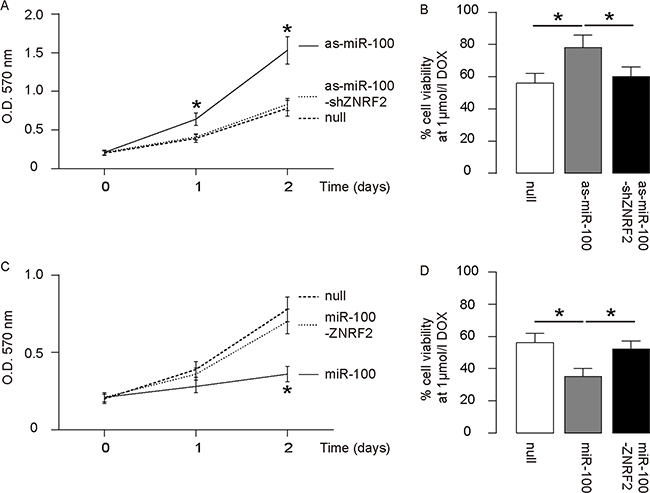 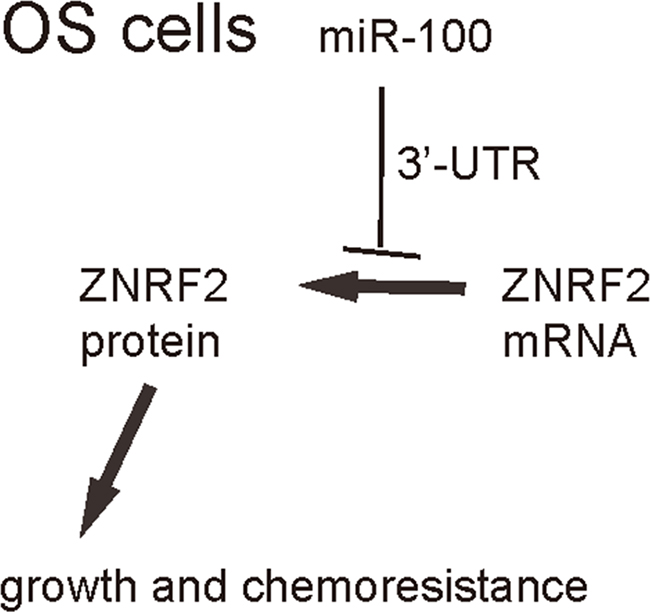 Figure 7: Schematic of the model. MiR-100 inhibits OS cell growth and suppresses its chemo-sensitivity through ZNRF2.

ZNRF2 is a membrane-associated E3 ubiquitin ligase involved in the activation and regulation of mTor through protein interaction [13]. Hoxhaj et al. showed that release of ZNRF2 into the cytosol is mediated through Akt phosphorylation by Akt [14]. Membrane interaction between ZNRF2 and mTOR initiates the amino acid-stimulated translocation of mTORC1 to lysosomes, resulting in activation of mTOR signaling to augment cell growth [14]. Upon growth factor and amino acid stimulation, ZNRF2 is phosphorylated on Ser145 by mTORC1, which enhances vesicle-to-cytosol translocation of ZNRF2 as a negative feedback. Hence, ZNRF2 appeared to be a novel factor that may be involved in malignant cell growth [14]. Since the biological function of ZNRF2 was very recently discovered, its participation in the cancer growth, progress and metastasis remain largely unexplored.

Previous studies have confirmed the importance of miRNAs in the tumorigenesis, but a role of miR-100 in the tumorigenesis is just acknowledged very recently [20–24]. In this study, we aimed to study the molecular mechanisms that underlie the regulation of the tumor growth of OS by miR-100 and ZNRF2. We actually screened all miRNAs that target ZNRF2 using bioinformatics analyses, and picked up 5 candidates with the highest binding affinity. Then, we examined whether the expression levels of these 5 candidates may alter in OS specimens compared to NT. We specifically found that miR-100 was such a microRNA. To the best of our knowledge, the current study is the first study that showed a direct regulation of ZNRF2 by a miRNA, and specifically in OS. Our findings thus highlight miR-100/ZNRF2 axis as a novel therapeutic target for inhibiting the growth of OS and for suppression of their potential of chemo-resistance.

In future, the mechanisms underlying which the OS cells become re-sensitive to chemotherapeutic drugs may be analyzed, for example, changes in gene network that regulates cell apoptosis and autophagy.

The current study has several limitations. First, a larger number of clinical samples may further increase the strength of the study. Second, although we have checked cisplatin in our experimental settings and got similar results as DOX, additional chemotherapeutic drugs might be examined in miR-100-modified cells in future. Third, in vivo application of gene therapy in animal models of OS may provide in vivo data to better comprehend the effects of miR-100 re-expression in OS treatment. Finally, the influence of ZNRF2 expression on overall survival of examined patients may be examined to provide additional information.

To summarize, here we provide evidence to suggest miR-100/ZNRF2 axis as a novel therapeutic target for inhibiting the growth of OS and for suppression of their potential of chemo-resistance.

A total of 28 resected OS specimens were compared with the paired normal bone tissue (NT) from the same patient (Table 1). All clinical samples were histologically examined and clinically diagnosed at the Liaoning Medical University from 2009 to 2010. Prior approval as well as the patient’s consents were obtained from the Institutional Research Ethics Committee.

ZNRF2, scrambled control (scr) and short hairpin small interfering RNA for ZNRF2 (shZNRF2, sequence: 5’- TACGTCCAAGGTCGGGCAGGAAGA-3’) were cloned into pCMV-luciferase-2A-GFP vector (Clontech, Mountain View, CA, USA) to replace the GFP to generate pCMV-luciferase-2A-transgene. MiR-100, an antisense (as) of miR-100, and a null sequence (null) were similarly prepared. MiR-100 sequence is 5’- AACCCGUAGAUCCGAACUUGUG-3’, and as-miR-100 sequence is 5’-CACAAGUUCGGAUCUACGGGUU-3’. Sequencing was performed to confirm the correct orientation of the plasmids, which were then used to transfect the cells at a concentration of 100 nmol/l using Lipofectamine 2000 (Invitrogen, Carlsbad, CA, USA). The transfection efficiency was more than 95%, based on GFP expression.

MiRNAs targets were predicted with the algorithm TargetScan, and the data were analyzed as previously described, using context+ scoring method [26]. The ZNRF2 3’-UTR reporter plasmid and the ZNRF2 3’-UTR reporter plasmid with a mutant at miR-100 binding site were both purchased from Creative Biogene (Shirley, NY, USA). The dual-luciferase reporter assay (Promega, Fitchburg, WI, USA) was performed 36 hours after transfection.

Total RNA was extracted from cultured cells with miRNeasy mini kit (Qiagen, Hilden, Germany). Quantitative PCR was performed in duplicates, and the results were analyzed using 2-△△Ct method. Values of mRNA were first normalized against α-tubulin, and then compared to the experimental controls, as described before [25].

The CCK-8 detection kit (Sigma-Aldrich) was described before [27].

A diphenyltetrazolium bromide (MTT) assay was described before [27].

All statistical analyses were carried out using the SPSS 19 statistical software. The values are presented as mean ± SD and are considered significant if p < 0.05, analyzed with the method of one-way ANOVA with a Bonferroni correction. Fisher’s Exact Test was applied to compare two groups. Kaplan-Meier analysis was used to analyze Patients’ survival.