Mitogen-activated protein kinase kinase 4 (MKK4) is a key mediator of Jun N-terminal kinase signaling and influences malignant metastasis. Here, we used immunohistochemistry to assess phosphorylated MMK4 (pMKK4) levels and examine their association with the clinicopathological features of a pilot set of patient samples consisting of normal colonic mucosa (NCM), colorectal adenoma (CA), and colorectal cancer (CRC) tissues. pMKK4 levels were also assessed in a validation set of CRC cases with accompanying follow-up data to confirm their clinicopathological and prognostic significance. pMKK4 levels, which were high in 79.17% of NCM samples, were downregulated in 33.33% of CA and 63.54% of CRC samples. pMKK4 downregulation was associated with metastasis, especially to the liver. In the validation set, pMKK4 downregulation was associated with increases in invasive depth, lymph node metastasis, distant metastasis, and TNM stage. Univariate analysis indicated that pMKK4 score, tumor differentiation, and TNM stage were correlated with disease-free survival and overall survival. Multivariate analysis indicated that decreased pMKK4 expression was an independent risk factor for disease-free survival in CRC patients. These results suggest that CRC patients with low pMKK4 immunochemistry scores should be monitored carefully for early detection of possible recurrences, especially liver metastasis.

Although positional cloning coupled with in vivo m1etastasis assays suggested that MKK4 is a metastasis suppressor gene [4], the role of MKK4 in tumor progression and metastasis requires further investigation. MKK4 has also been implicated in apoptosis and neoplastic transformation. Genetic inactivation of the MKK4 gene on chromosome 17p has been reported in pancreatic, biliary, and breast carcinomas, suggesting that MKK4 acts as a tumor suppressor gene in these tumors. Furthermore, progressive loss of MKK4 expression has been reported in prostate and ovarian cancers [3, 5, 6]. Downregulation of MKK4 induced the development of a more aggressive cancer phenotype that is more prone to invasion, metastasis, and chemo-resistance [7]. However, in another report, MKK4 protein expression increased in invasive gastric cancer [8]. A recent study also identified MKK4 as a putative tumor marker with possible prognostic value in gastric cancer [9].

The effects of MKK4 in colorectal tumorigenesis have not been well studied. Here, we investigated the role of phosphorylated MKK4 (pMKK4), the activated form of MKK4, in colorectal cancer (CRC). To investigate whether dual phosphorylation of pMKK4 at S257/ T261 is involved in CRC progression and metastasis, we used tissue microarrays to examine pMKK4 expression in a pilot set of normal colonic mucosa (NCM), colorectal adenomas (CA), and CRC samples with different TNM stages. We then examined pMKK4 expression in a validation set containing additional CRC specimens and accompanying long-term follow-up data to explore the clinicopathological and prognostic significance of pMKK4’s effects on CRC progression.

Table 2: Clinicopathological characteristics of the further validation-set of colorectal

Table 4: Correlation between pMKK4 score and clinicopathological characteristics of 96 CRC cases in the pilot-set

IHC staining of pMKK4 in NCM, CA, and CRC

Cytoplasmic staining of pMKK4 was seen in 100.0% (24/24) of NCM, 87.5% (21/24) of CA, and 75.0% (72/96) of CRC (Table 3) pilot set specimens. All malignant cases displayed one of two distinct staining patterns; the first was similar to the pattern seen in benign tissue and was characterized by predominantly cytoplasmic staining, while the second was characterized by focal, weakly positive staining. All NCM samples showed moderate-to-strong pMKK4 expression mainly in the cytoplasm of glandular epithelial cells (Figure 1A). The majority of CA samples showed moderate pMKK4 staining (Figure 1B), while the majority of CRC specimens were negative for or showed weak pMKK4 staining (Figure 1C and 1D). In the pilot set, loss of pMKK4 expression was detected in 3 of 24 CA and 24 of 96 CRC samples. pMKK4 staining scores progressively increased in NCM more than in CA and CRC (P = 0.0035, 0.0002, respectively) (Table 3). In the validation set, 192 (43.8%), 128 (29.2%), 86 (19.6%), and 32 (7.3%) samples were labeled as negative, weak, moderate, and strong, respectively, for pMKK4 staining. Because none of the pilot set NCM samples were negative for or had weak pMKK4 staining, and because tumors with weak pMKK4 expression shared more biological similarities with pMKK4-negative tumors, validation set patients were then divided into “low pMKK4 score” (negative/weak) and “high pMKK4 score” (moderate/strong) groups for subsequent survival analysis (Table 2). 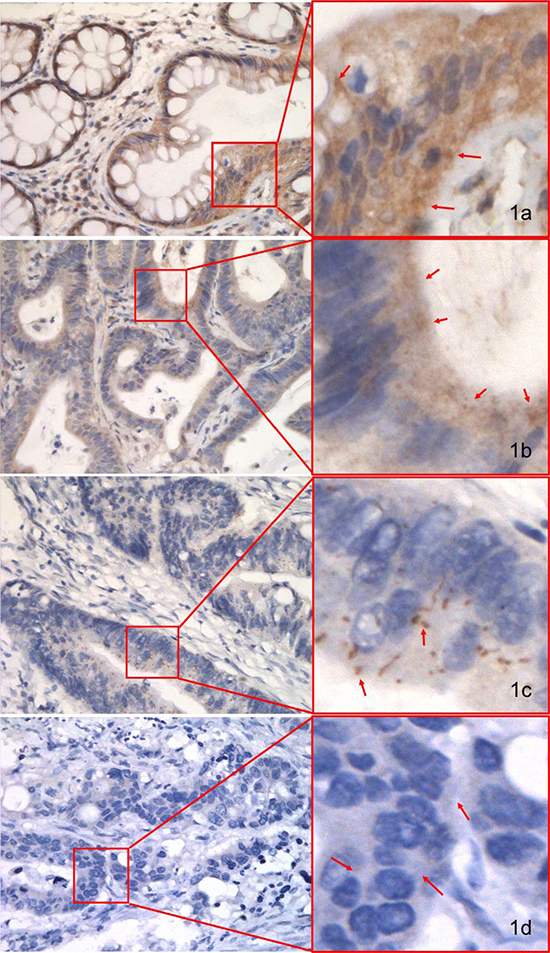 Associations between pMKK4 and clinicopathological characteristics in CRC 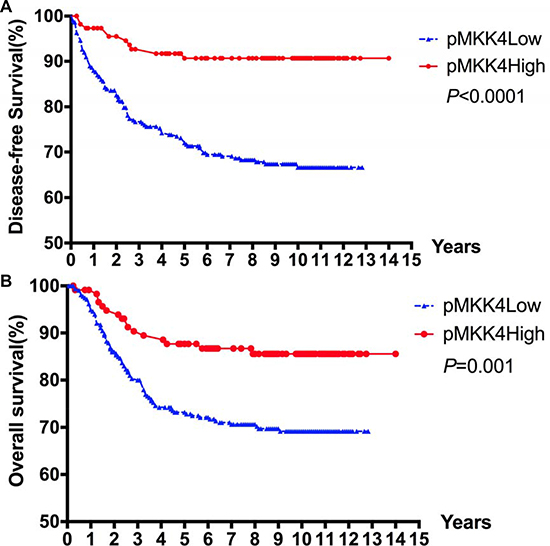 Table 5: Univariate analysis of pMKK4 score and clinicopathological characteristics in the validation-set

Table 7: Multivariate Cox Analysis of pMKK4 score for DFS and OS after adjusting for tumor differentiation, pMKK4 score and TNM Stage in CRC

MKK4 acts as a bottleneck in the SAPK signaling pathway. Most studies classify the MKK4 gene as a candidate tumor-suppressor gene and report that its expression is decreased in various tumors [5, 6, 11]. In contrast, Wang et al. [12] suggested that MKK4 has pro-oncogenic activity, but their interpretation of the findings is debatable. Cuenda pointed out that inhibition of MKK4 might have a paradoxical effect; instead of inhibiting proliferation, MKK4 inactivation might promote cancer cell survival by inhibiting JNK-mediated apoptosis pathways [8]. Furthermore, metastasis suppressors, such as NM23, MKK4, and KAI1, are not generally mutated, but rather “turned off” [13]. The regulation of MKK4 may also be tissue and site-specific [14]. Thus, the conflicting biological effects of MKK4 in human cancer might reflect the complexity of MAPK signal transduction.

Our findings suggest that downregulation of pMKK4 expression is strongly associated with unfavorable tumor phenotypes and worse DFS in CRC. Local tumor invasion and distant metastasis, especially liver metastasis, were increased in patients with low pMKK4 expression (Tables 3 and 5). In the validation set, long-term follow-up data confirmed that DFS and OS were worse in patients with low pMKK4 scores than in those with high scores (Figure 2). More than half of the patients included in this study were in the early stages of CRC and underwent surgery without any preoperational new adjuvant therapies, which minimized the influence of those therapies on pMKK4 downregulation-induced effects on DFS. Multivariate analysis confirmed that pMKK4 was an independent risk factor for DFS, even after adjusting for tumor differentiation and TNM stage. Although pMKK4 expression was not an independent risk factor for OS, some postoperative treatment strategies (e.g., reoperation, regional ablation, hepatectomy, and adjuvant chemotherapy) might help to increase disease-free rates among patients with resectable recurrences. Although our findings suggest that pMKK4 expression may influence OS, TNM stage remained the strongest independent predictor of prognosis.

Some limitations of our study should be considered when interpreting the results. First, pMKK4 expression was evaluated using only tissue arrays; currently, there is no reliable model for testing pMKK4 expression in NCM, CA, or early-stage CRC samples either in vitro or ex vivo. Furthermore, NCM tissue is difficult to maintain in a culture system, and therefore is not readily available [13]. Second, different tumor cell line types and experimental models have previously produced paradoxical findings regarding pMKK4’s effects. Moreover, most available colorectal epithelial cell lines have been derived from malignant tumors, and normal colorectal cell lines are rarely available. For these reasons, the specific biological mechanism of pMKK4 in NCM, CA, and CRC should be explored in the future works.

In summary, pMKK4 might function as a tumor suppressor in CRC. Downregulation of pMKK4 was associated with a more aggressive phenotype and with increases in local invasion and metastasis. pMKK4 was also strongly associated with DFS, implying that CRC patients with low pMKK4 expression should be monitored carefully for the early detection of possible recurrences, especially liver metastasis.

The pilot set consisted of formalin-fixed and paraffin-embedded specimens from 24 CA and 96 CRC cases collected during initial surgical resections between March 2008 and August 2009 that were randomly selected from the specimen bank of the Sixth Affiliated Hospital, Sun Yat-sen University. Twenty-four NCM specimens were obtained for comparison during procedures for prolapse and hemorrhoids. Clinicopathological characteristics are summarized in Table 1.

The validation set consisted of 438 cases randomly selected from a group of 2000 CRC patients who had not received any preoperative treatments and who underwent initial surgical resections between January 2000 and December 2006 at the First Affiliated Hospital, Sun Yat-sen University. Microarray data were available for all patients, and clinicopathological characteristics are summarized in Table 2. The median duration of follow-up was 102.0 months (± 45.2 months). The use of patient specimens was approved by the local ethics committees of both the First Affiliated Hospital and the Sixth Affiliated Hospital of Sun Yat-sen University.

A MiniCore® tissue arrayer (Alphelys, France) was used to construct the tissue microarray [18]. Hematoxylin and eosin-stained slides of all formalin-fixed paraffin-embedded specimens were examined by the experienced pathologists Huang Y and Fan XJ, who selected areas containing CRC, CA, or NCM while avoiding areas of necrosis, inflammation, and keratinization. To assess reproducibility, we selected two cores from different areas of a single specimen. The tissue microarray construction procedure used here has been described elsewhere [18]. Briefly, tissue cylinders 1.0 mm in diameter were punched from representative tissue areas and embedded in single paraffin blocks (2.6 cm × 2.2 cm). Serial sections (4.0 μm) were cut from these blocks with a microtome and mounted on APES-coated slides for IHC analysis.

An affinity-purified rabbit anti-phospho-MKK4 polyclonal antibody (Catalog Number, AF2990) showing selective immunoreactivity with a phosphopeptide containing the S257/T261 site of MKK4 was obtained from R&D, Inc. (USA). The antibody was employed for subsequent IHC assays at a dilution of 1:100. Standard indirect immuno-peroxidase procedures were used for IHC analysis. Slides were de-waxed and rehydrated in dH2O. Following microwave-mediated antigen retrieval in 0.01 M sodium citrate (pH = 6.0), endogenous peroxidase activity was blocked using 3% H2O2 for 10 min, and the sections were incubated with 10% normal goat serum for 30 min at room temperature. Primary antibody was then added to the slides, which were then incubated overnight at 4°C and washed. Subsequently, the sections were incubated with HRP-conjugated secondary antibody (Rabbit/Mouse, Peroxidase/DAB+, Code K5007, DAKO REAL™ EnVision™ Detection System) for 30 min at room temperature. For visualization of the antigen, sections were stained with DAB+ chromogen for 30 s according to the manufacturer’s instructions and counterstained with Gill’s hematoxylin. The primary antibody was omitted as a negative control.

Two investigators (pathologists Dr. Huang Y and Dr. Fan XJ) independently evaluated the IHC staining. The results were evaluated by assigning IHC scores as previously described. The mean percentage of positive tumor cells in at least five areas under 400× magnification was determined and assigned to one of five categories: < 5%, 0; 5–25%, 1; 25–50%, 2; 50–75%, 3; and > 75%, 4. The intensity of pMKK4 immunostaining was scored as follows: negative, 0; weak, 1; moderate, 2; and intense, 3. The IHC score was calculated by adding the mean percentage and intensity values and was assigned to one of four categories: 0–1, negative (–); 2–3, weak (+); 4–5, moderate (++); and 6–7, strong (+++) [19]. Specimens with IHC scores 0–3 (–/+) were assigned to the low pMKK4 score group, while specimens with IHC scores 4–7 (++/+++) were assigned to the high score group. In cases for which the observers provided similar scores, the two scores were averaged. In the small subset of cases in which there were significant differences in initial interpretations, scores were assigned by consensus.