Numerous epidemiological studies have evaluated the association between polymorphism in the gene encoding x-ray repair cross complementing 1 (XRCC1) protein and the risk of female reproductive system cancer, but results are inconclusive. To gain a comprehensive picture of available evidence, we searched for relevant studies in the PubMed, EMBASE, Scopus, and Chinese National Knowledge Infrastructure databases up to December 17, 2016. A total of 26 case-control studies were picked out. The pooled odds ratio (OR) with its 95% confidence interval (CI) was calculated to estimate the association. Based on data of all study participants, we did not find a positive association of rs25487 or rs1799782 polymorphism with risk of female reproductive cancer risk. Subgroup analysis, however, identified two alleles as being associated with an increased risk of female reproductive system cancer in Asians: the A allele of rs25487 (heterozygous genetic model, OR 1.16, 95%CI 1.00–1.36), and the T allele of rs1799782 (homozygous model, OR 2.30, 95%CI 1.39–3.82; dominant model, OR 1.28, 95%CI 1.10–1.50; recessive model, OR 2.11, 95%CI 1.33–3.34). Moreover, the AA genotype at rs25489 was determined to be a risk factor for cervical cancer etiology (homozygous model, OR 2.91, 95%CI, 1.17–7.26; recessive model, OR 3.16, 95%CI 1.91–5.24). This meta-analysis suggests that no association between rs25487 or rs1799782 gene polymorphism and risk of female reproductive cancer risk was found. These results should be validated in larger studies.

Female reproductive system cancer, which includes cervical cancer, endometrial cancer, and ovarian cancer, is a major threat to women’s health. In fact, cervical cancer ranks third among all gynecologic cancers in the world [1], 65 new endometrial cancer cases occur annually per 100,000 women between the ages of 65 to 75 [2], and approximately 140,200 new ovarian cancer cases worldwide per year are recorded [3]. Elucidating the etiology of female reproductive system cancer and identifying at-risk populations may allow more effective early detection and perhaps even prevention.

The causes of these cancers remain poorly understood. Infection with oncogenic human papilloma virus (HPV) is a risk factor in tumorigenesis [4], but many HPV carriers do not develop cervical cancer, indicating that there must be other cancer risk factors, such as genetic and environmental factors. One possible genetic factor may be polymorphism in the gene encoding x-ray repair cross complementing 1 (XRCC1) protein. The gene is located on chromosome 19 (19q13.2), and the expressed protein is involved in the base excision repair (BER) pathway [5, 6], which helps correct errors during DNA replication and recombination as well as preserve genome integrity [7]. Functional single-nucleotide polymorphisms (SNPs) in XRCC1 have been linked to development of esophageal squamous cell carcinoma [8], lung cancer [9], pancreatic cancer [10], breast cancer [11], colorectal cancer [12], and gastric cancer [13]. While more than 300 XRCC1 SNPs have been described in the dbSNP database, three functional SNPs have been extensively studied, all of which cause amino acid substitutions in the encoded protein: rs25487 [Arg399Gln], rs1799782 [Arg194Trp] and rs25489 [Arg280His].

Associations between XRCC1 SNPs and risk of female reproducitve system cancer are unclear, because the several molecular epidemiologic studies conducted so far have been inconclusive. This lack of clarity may reflect the relatively small statistical power in individual studies, as well as heterogeneity in genetic backgrounds of study participants. Therefore we performed this meta-analysis to comprehensively assess available evidence on the association between XRCC1 polymorphism and risk of female reproductive system cancer. 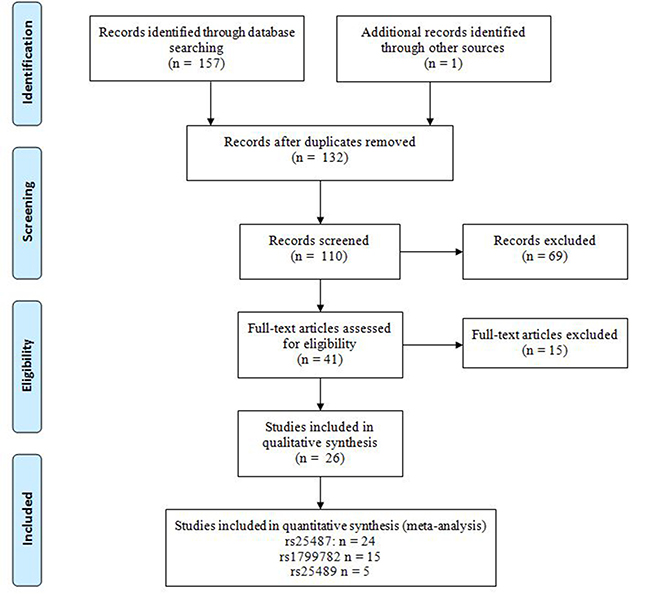 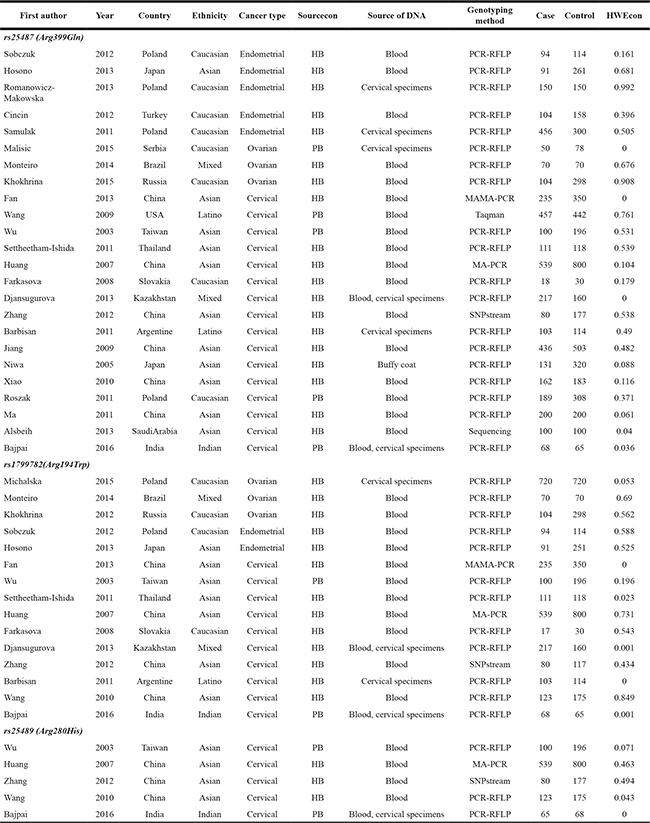 Across the entire pooled study population, a significant association was not found between rs25487 and risk of female reproductive system cancer (Table 2). In the subgroup of Asian participants, however, we detected a significant association of the A variant at rs25487 with increased risk of female reproductive system cancer (GA vs. GG, OR 1.16, 95%CI 1.00–1.36). This association disappeared when we excluded 5 studies that deviated from HWE, instead appearing in the subgroup of Non-Asian participants (AA vs. GA/GG, OR 1.61, 95%CI 1.41–1.85). Subgroup analysis by cancer type indicated an association between the A allele at rs25487 and increased risk of cervical cancer (AA vs. GA/GG, OR 1.22, 95%CI 1.05–1.41), endometrial cancer (AA vs. GG, OR 2.16, 95%CI 1.00–4.67) and ovarian cancer (AA vs. GA/GG, OR 2.01, 95%CI 1.70–2.38). The significant associations with cervical cancer and ovarian cancer disappeared after removing studies that deviated from HWE.

Table 2: Meta-analysis of the associations between XRCC1 polymorphisms and risk of female reproductive system cancer 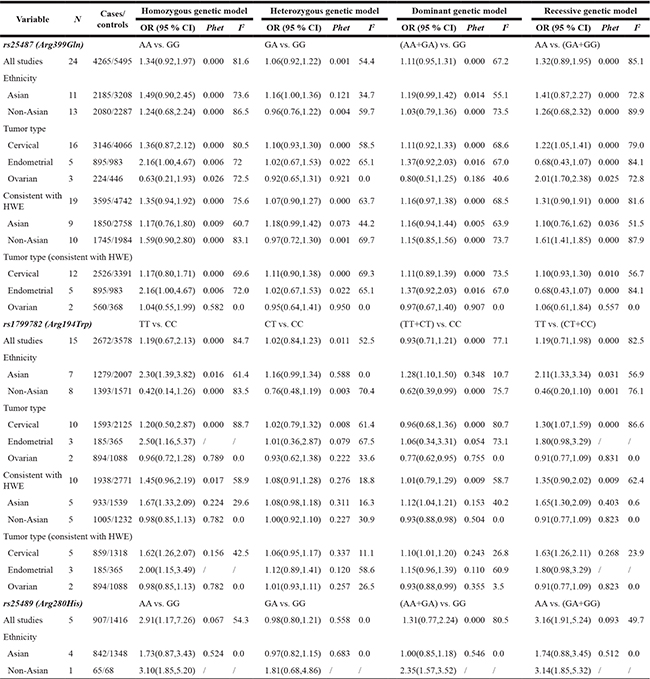 Then we performed sensitivity analysis, in which we recalculated the meta-analysis after deleting each study systematically. The results were not substantially different after excluding any single study, indicating the robustness of our original meta-analyses.

XRCC1 is the first protein to participate in the BER pathway, acting as a scaffold for other DNA repair proteins, such as DNA ligase IIIa, DNA polymerase β and poly (ADP-ribose) polymerase [40]. The XRCC1 SNPs rs25487, rs1799782, and rs25489 have been linked to susceptibility for several types of cancer, but it is unclear whether this is also true for female reproductive system cancer. The present meta-analysis suggests that as in other cancers, XRCC1 polymorphism may also influence tumorigenesis in the female reproductive system.

The present study may be the first quantitative meta-analysis of XRCC1 polymorphism and risk of female reproductive system cancer. Previous meta-analyses focused only on cervical cancer risk [41–45], and they reported that rs25487 and rs1799782 were associated with increased risk in Asian populations. The present meta-analysis extended this finding by showing that in Asians, the A allele of rs25487 and T allele of rs1799782 are associated with increased risk of female reproductive system cancer. These findings should be verified in larger studies, especially since the association with rs25487 disappeared in Asians and appeared in Non-Asians after we excluded studies deviating from HWE.

We did not observe a significant association between XRCC1 rs25489 and risk of ovarian cancer, even though estrogens and their metabolites damage DNA by forming bulky DNA adducts [46], which are normally repaired by the BER pathway. It is possible that our negative results reflect limited sample size. Further studies are needed to verify our findings.

To ensure results as reliable as possible, we analogized the studies in our meta-analysis to approximate randomized controlled trials. At the same time, our study does have several limitations. Our results were based on OR analyses that did not adjust for age, family history, gender, reproductive history, or other biological factors that might influence risk of female reproductive system cancer. Similarly, we did not take into account potential effects of gene-environment interaction. Therefore further work is needed before definitive conclusions can be drawn about these three XRCC1 SNPs and risk of female reproductive system cancer.

Despite these limitations, our data provide up-to-date evidence from a comprehensive review of the literature that the A allele of rs25487 and T allele of rs1799782 are low-penetration risk factors for female reproductive system cancer in Asians. It may be that these alleles translate to weaker interaction between XRCC1 and other repair proteins, thereby reducing DNA repair capacity [47]. Our findings add to the growing evidence that polymorphism in DNA repair genes can destabilize the genome and increase tumor susceptibility [32].

We performed a comprehensive literature search in the PubMed, EMBASE, Scopus, and CNKI databases up to December 17, 2016. The following search strings were used: “X-ray repair cross complementing protein1” or “XRCC1”; “polymorphisms” or “variants”; “carcinoma” or “cancer” or “malignancy” or “neoplasm” or “tumour” or “tumor”; “cervical” or “endometrial” or “ovarian” or “vaginal” or “vulvar” or “fallopian tube” or “female reproductive system”. The reference lists of relevant articles were also searched manually to identify additional eligible studies. When different studies presented overlapping data, we included only the larger study.

Studies included in this meta-analysis had to be case-control or genome-wide association studies for which full text was available and that reported adequate data on genotype frequencies for cases and controls. Studies were excluded if they reported data overlapping with those of a larger study.

Agreement between study results and HWE predictions was tested using the goodness-of-fit χ2 test, with the threshold for HWE defined as P > 0.05. Strength of association between XRCC1 SNPs and cancer risk was assessed using odds ratios (ORs) and associated 95% confidence intervals (95%CI). Four different genetic models were conducted to detect the association: homozygous model (VV vs. WW), heterozygous model (WV vs. WW), dominant genetic model (VV+WV vs. WW) and recessive model (VV vs. WW+WV), with W and V representing the wild and variant alleles of each SNP. Heterogeneity across studies was assessed using a χ2-test-based Q statistic test, and the level of heterogeneity was quantified using the I2 test. When heterogeneity across studies was obvious (P ≥ 0.05 or I2 < 50%) [48], the random effects model was used to meta-analyze data from different studies. Otherwise, the fixed effects model was adopted [49]. All studies were analogized into interim randomized controlled clinical trials in order to control for type I and type II error.

Subgroup analyses were carried out based on ethnicity, tumor type and HWE [50]. Sensitivity analysis was performed in which we recalculated the meta-analysis after deleting each study systematically. Publication bias was investigated using Begg’s and Egger’s test [51], with significant risk of bias defined as P < 0.05. All statistical analyses were performed using STATA 11.0 (Stata Corp, College Station, Texas USA). All P values were two-sided.

This research was funded by the Guangxi University of Science and Technology Research Project (KY2015YB073) and the Guangxi Medical Care Appropriate Technology Research and Development (S201627). The funding source had no role in the design or conduct of the study; in the collection, analysis or interpretation of the data; or in the preparation, review, or approval of the manuscript.

29. Xiao HY, Wu WQ, Xie H. Relationship between the polymorphism of XRCC-Arg399Gln and incidence risk of cervical cancer in the population of Guangdong. Hainan Med J. 2010; 21:35–37.

32. Romanowicz-Makowska H, Smolarz B, Houli A, Szyllo K. Single nucleotide polymorphism in DNA base excision repair genes XRCC1 and hOGG1 and the risk of endometrial carcinoma in the Polish population. Pol J Pathol. 2011; 62:89–94.