We aim to evaluate the prognostic effect of the histological sub-type in patients with metastatic bladder cancer based on the Surveillance Epidemiology and End Results database. A total of 2634 eligible patients were included. The histological subtypes were: transitional cell carcinoma (TCC; 75.2%); adenocarcinoma (3.3%); squamous cell carcinoma (SQCC; 4.1%); and small cell carcinoma (4.3%). A significant association of adenocarcinoma with better survival outcomes (P < 0.015), and that of SQCC with worse outcomes (P < 0.001) was observed. On multivariate analysis, adenocarcinoma was significantly associated with longer and SQCC with shorter survival time as compared to TCC. Overall, 1331 (50.5%) patients had a single metastatic site and 523 (19.9%) had multiple sites involved. Single-site metastasis had a better survival outcome than multiple metastases (P < 0.001). Histological sub-type and presence of multiple metastatic sites are independent predictors of survival time. Prospective, in-depth research is needed to determine optimal therapeutic strategies for different histological subtypes of bladder cancer with different metastatic patterns.

Bladder cancer (BC) has the fifth highest incidence among all cancers in the United States; an estimated 76960 new cases of BC and 16390 deaths from BC occurred in 2016 [1]. It is also the 9th most common cancer and the 13th most common cause of death worldwide [2]. Urothelial carcinoma (transitional cell carcinoma, TCC) is the most common histological sub-type of primary BC, which accounts for > 90% of all bladder tumors. Other histological subtypes include squamous cell carcinoma (SQCC), adenocarcinoma (AD), small cell carcinoma (SCC) and some other rare non-epithelial subtypes. Among these, SQCC, AD and SCC account for less than 5%, 2% [3] and 1% [4, 5] of all primary bladder tumors, respectively.

The rare occurrence of non-TCC subtypes precludes large, prospective studies to compare outcomes. Retrospective and cohort analyses remain the primary tools for clinical research. Previous studies of the impact of non-TCC histology on survival have yielded inconsistent results [6–9]. Some have reported no difference in survival between SQCC and TCC [7–9]. However, a multi-institutional retrospective study to assess the impact of non-TCC histology on bladder cancer-specific outcomes in patients treated with radical cystectomy [6] suggested that non-TCC histology portends worse clinical outcomes. This may reflect a greater propensity for locally aggressive disease and distant metastasis, as well as differential response to chemotherapy or radiotherapy.

Approximately 25% of all TCC patients will have muscle-invasive and metastatic disease. The prevalence of bone metastasis was reported to be 30–40% in patients with metastatic TCC [10] and the presence of distant (lung, liver, bone) metastases were reported to correlate with shortened survival [11–17]. However, the effect of other histological subtypes on clinical outcomes in patients with metastatic BC remains unclear. Thus, we evaluated TCC and three other rare BC histological sub-types in a contemporary, population-based cohort with an emphasis on the metastatic frequency of BC histology and their effect on overall- and cancer-specific survival. 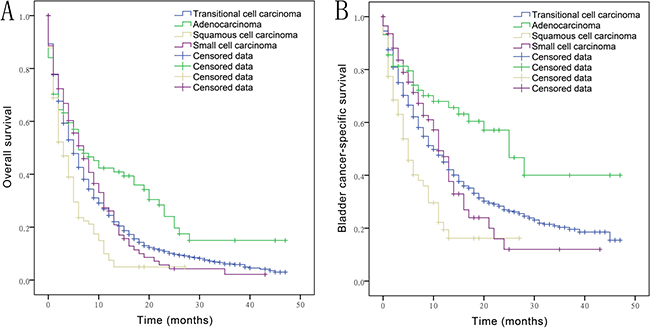 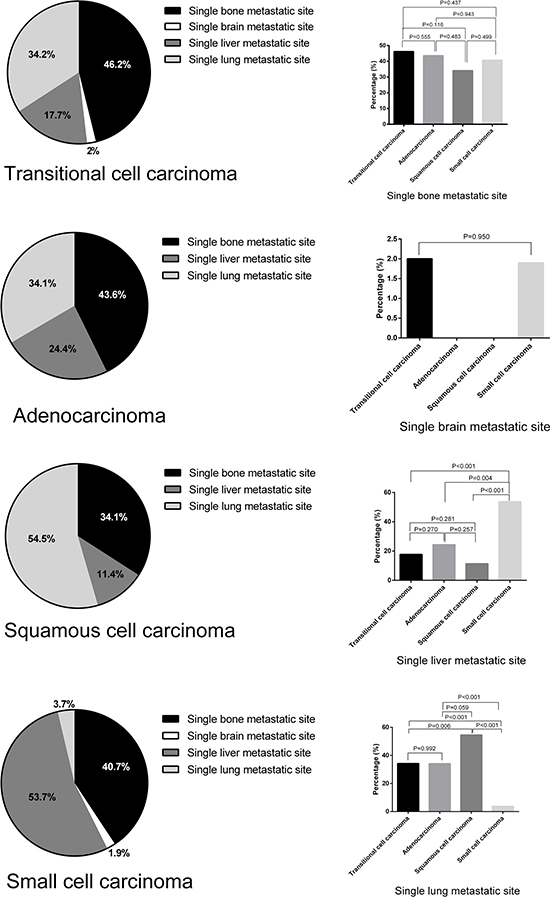 Variables significantly associated with survival in univariate analysis were included in the multivariate analysis (Table 3). The effect of presence of multiple metastatic sites was further increased after accounting for other covariates (HRs for OS and CSS: 1.428 and 1.605, respectively, versus presence of single metastatic site). Compared with TCC, a lower hazard for OS and CSS was identified in patients with AD (HR: 0.593, 0.599, respectively), while a higher hazard of mortality was found in those with SQCC (HR: 1.496, 1.733 respectively). Other variables significantly associated with OS on multivariate analysis included age (> 65 years old) and history of surgery. Age > 65 years was associated with shorter OS (HR: 1.273 vs. age < 65 years). Patients who had a history of surgery tended to have longer OS (HR: 0.729 vs. those with no history of surgery).

We conducted a retrospective cohort study using data from the SEER database to investigate the effect of histological sub-type on survival in patients with metastatic BC. Our study revealed several important findings. First, although the association between histological subtype and prognosis of BC has been investigated before, previous population-based studies were limited only to one rare histological subtype of BC such as SQCC [7–9], AD [18, 19] or SCC [4, 5, 20–24], or had relatively small sample sizes [6]. SQCC histology was reported to be an independent predictor of higher all-cause and bladder cancer-specific mortality as compared to TCC among patients with advanced stages (AJCC stage III/IV) [7]. However, some studies found no difference in CSS associated with SQCC and TCC [6, 8, 9, 25]. A large cohort study showed that patients with primary AD were not associated with worse prognosis than patients with TCC [26]. We found that AD patients had better survival outcomes than those with conventional TCC, while SQCC had worse outcomes than TCC. Further, there were no significant differences in OS and CSS between TCC and SCC patients in stage M1 group, which is in accordance with results of a previous study [27].

Secondly; we discovered a difference in metastatic tendency between the SQCC and SCC subtypes of BC. We found that SQCC metastasizes predominantly to lung (54.5%), while SCC metastasizes predominantly to liver (53.7%) and is least likely to metastasize to lung (3.7%) when compared with other histological subtypes of BC. These results are in line with studies conducted at the M. D. Anderson Cancer Center [28] and Mayo Clinic [29]. Although brain metastases are a frequent complication in patients with SCC of the lung, they do not appear to be a common metastatic site in patients with SCC of the bladder [20, 22, 30]. We also found only one patient (1.9%) who developed brain metastases. Due to the low incidence of brain metastases in SCC of the bladder, prophylactic cranial irradiation is not routinely recommended. In cases of metastatic BC, transurethral resection, cystectomy combined with systemic chemotherapy has been proposed apart from partial cystectomy, and radiotherapy [22]. However, there is a paucity of robust data to inform appropriate tailored therapies for different histological subtypes of metastatic BC.

Limitations of our study include the retrospective design and its associated bias, such as selection bias for different treatment schedules. Moreover, due to the inherent limitations of the SEER database, data on specific metastatic sites prior to year 2010 were not available; therefore, the reference period for this study was 2010–2013. We also have no access to data on performance status and chemotherapy which are also important prognostic factors for patients with metastatic BC. So the use of claims based data for this approach will lead to somewhat insufficient estimations. Despite the above limitations, our study fills a gap with respect to histological subtypes and metastatic sites of BC.

Categorical variables of Table 1 and metastatic rates of Figure 3 are presented as percentages and analyzed by Chi-squared test and Fisher’s exact test. In Figure 1 and Figure 2, the Kaplan-Meier method was used to calculate survivor functions and differences in OS, CSS probabilities were estimated using the log rank statistic. The Cox proportional hazards model was used to assess association of variables with survival. Variables showing a significant association with survival on univariate analysis were included in the multivariate model. Statistical analyses were performed using SPSS version 21 (IBM, Chicago, IL, USA); two-sided value of P<0.05 was considered statistically significant. The bar and pie charts were drawn using GraphPad Prism version 6.01 (San Diego, CA).