The prognosis and five-year survival of hepatocellular carcinoma (HCC) patients are often poor, yet the incidence is rising [1, 2]. Groups including ours [3–5] are dedicated to indentifying novel therapeutic targets of HCC, and to developing molecularly-targeted agents [6–8].

The other important aim of this study is identify TIC10 resistance factors. We focused on the possible function of DNA activated protein kinase (DNA-PK) catalytic subunit (DNA-PKcs). DNA-PKcs and two Ku hetero-dimer (Ku-70 and Ku-80) form DNA-PK complex [20, 21]. It has been shown that DNA-PKcs expression is significantly upregulated in HCC and other cancers, which is often associated with a poor clinical outcome [22]. For example, Evert et al., has shown that DNA-PKcs upregulation might be important for human hepatocarcinogenesis and a putative prognostic marker [23]. Meanwhile, DNA-PKcs could also serve as a HCC tissue biomarker that predicts response to treatment and survival [22]. Intriguingly, DNA-PKcs not only can protect cancer cells from harmful DNA insults, but could also possess other functions to promote cancer cell survival and proliferation [24]. Inhibition, silence and loss-of-function mutation of DNA-PKcs were shown to inhibit a number of cancer cells [25–31]. In this study, we propose that DNA-PKcs could be a primary resistant factor of TIC10 in HCC cells. 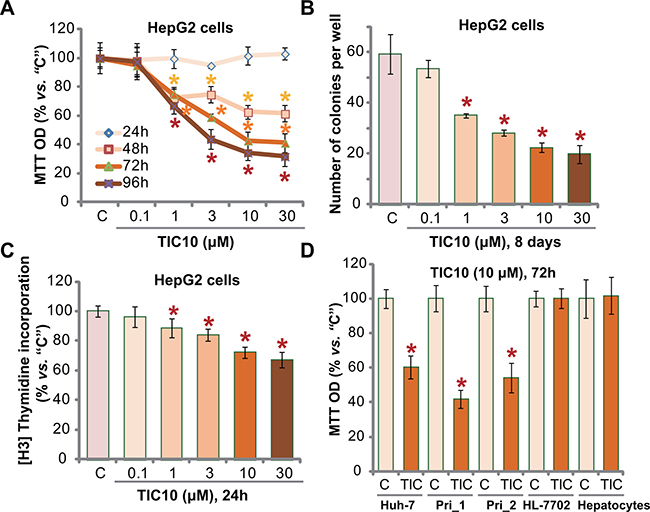 Next, we tested the potential resistance factor of TIC10 by focusing on DNA-PKcs. We utilized previous strategies [5]. The dominant negative mutant DNA-PKcs (T2609A) or DNA-PKcs shRNA was introduced into the HepG2 cells, and via selection, stable cell lines were established [5]. Western blotting assay results confirmed DNA-PKcs mutation or knockdown in above stable cells (Figure 3A, upper panel). Significantly, TIC10-induced proliferation inhibition, or MTT OD reduction, was potentiated in DNA-PKcs-mutated or -silenced HepG2 cells (Figure 3A). Likewise, Nu7026, a known DNA-PKcs inhibitor [36], also intensified TIC10’s cytotoxicity against HepG2 cells (Figure 3A). The IC-50 of TIC10, or the concentration that inhibited 50% of cell proliferation, decreased from 8.32 ± 0.73 μM to less than 1.0 μM when combined with Nu7026 or DNA-PKcs silence (Figure 3A). TIC10 (10 μM)-induced HepG2 cell apoptosis was also significantly augmented with DNA-PKcs silence, mutation or inhibition (Figure 3B and 3C). These results imply that DNA-PKcs could be a primary resistance factor of TIC10 in HCC cells. Notably, DNA-PKcs silence, mutation or inhibition only moderately induced proliferation inhibition and apoptosis in HepG2 cells (Figure 3A–3C), which were consistent with our previous findings [33]. 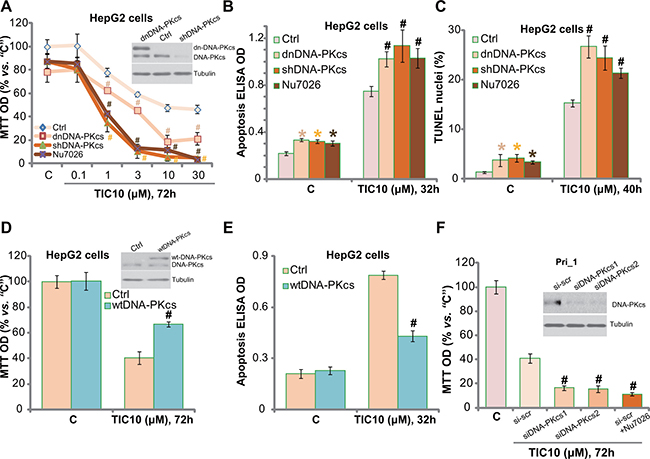 Figure 3: DNA-PKcs could be a primary resistance factor of TIC10 in HCC cells. HepG2 cells, expressing dominant negative DNA-PKcs (“dnDNA-PKcs”, Flag-tagged), DNA-PKcs shRNA (“shDNA-PKcs”), wild-type DNA-PKcs (“wtDNA-PKcs”, Flag-tagged), or the parental control HepG2 cells (“Ctrl”), were treated with applied concentration of TIC10, or together with the DNA-PKcs inhibitor Nu7026 (10 μM), cells were further cultured in the conditional medium for applied time; Cell proliferation was tested by MTT assay (A and D); Cell apoptosis was tested by the Histone DNA ELISA assay (B and E) or TUNEL staining assay (C); Expression of DNA-PKcs (both wild-type and mutant) and Tubulin (loading control) were shown (A and D, upper panels). The primary human HCC cells (“Pri_1”), transfected with DNA-PKcs siRNAs (“-1/-2”) or scramble siRNA (“si-scr”), were treated with TIC10 (10 μM) or plus Nu7026 (10 μM) for indicated time; Cell proliferation was tested by MTT assay (F); Expressions of DNA-PKcs and Tubulin (loading control) were shown (F, upper panel). Experiments in this figure were repeated for three times, with similar results obtained. n = 5 for each repeat. Bars stand for mean ± SD *p < 0.05 vs. group “C”. #p < 0.05 vs. “Ctrl” (A–E) or “si-scr” (F).

Based on the above results, we would propose that DNA-PKcs over-expression may decrease TIC10’s cytotoxicity in HCC cells. Therefore, the wild-type DNA-PKcs (“wtDNA-PKcs”) construct (from our previous study [5]) was introduced to the HepG2 cells, and stable cell line was again established. Western blotting assay results in Figure 3D (upper panel) confirmed the expression of the wtDNA-PKcs (Flag-tagged) in the stable cells. Remarkably, DNA-PKcs over-expression in HepG2 cells indeed largely attenuated TIC10-induced proliferation inhibition (Figure 3D) and apoptosis (Figure 3E). These results further confirm the function of DNA-PKcs against TIC10 in HepG2 cells. 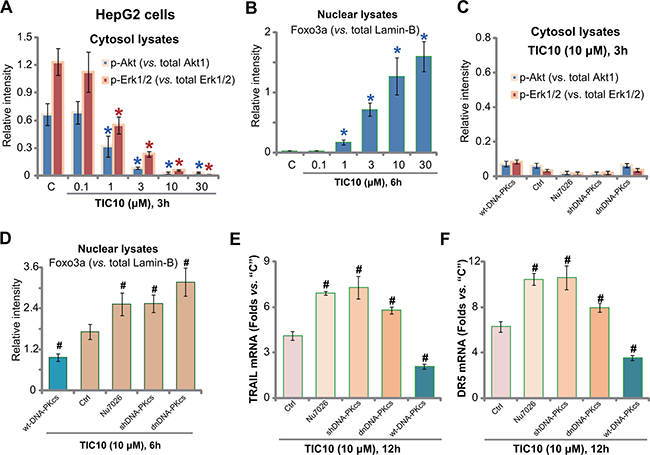 At last, we tested the potential anti-HCC activity of TIC10 in vivo. As described previously [5], a significant number of HepG2 cells were injected s.c. to the nude mice, and HepG2 tumor xenograft model was established. Tumor growth curve results in Figure 5A demonstrated that oral administration of TIC10 (30 mg/kg, daily) [13, 16, 37] efficiently inhibited HepG2 tumor growth in the nude mice. Remarkably, co-administration of Nu7026 (50 mg/kg, intraperitoneal injection, i.p.) [36, 38] potentiated TIC10-induced anti-HepG2 tumor activity (Figure 5A). TIC10 plus Nu7026 co-administration resulted in profound HepG2 tumor growth suppression, and the combined anti-tumor activity was more potent than each single treatment (Figure 5A). Treatment with Nu7026 alone only induced minor inhibition of HepG2 tumors (Figure 5A). Estimated daily tumor growth (in mm3 per day) was also dramatically suppressed by the co-administration, which was again more potent than each single administration (Figure 5B). Further, the weight of tumors in the co-administration mice was much lower than the vehicle control mice (Figure 5C), although each single treatment also decreased the tumor weights (Figure 5C). It should be noted that the above single or combined treatment didn’t significantly change the mice body weight (Figure 5D). We also failed to observe apparent toxicities in the mice. Thus, these mice were well-tolerated to the above single or combination treatment regimen.

Interestingly, we showed that TIC10 was non-cytotoxic to HL-7702 hepatocytes and primary adult human hepatocytes. These results are consistent with recent findings showing no or minor cytotoxicity of this compound to non-cancerous normal cells [10, 12, 16]. This could be due to several reasons. For example, we have shown that the basal Akt and Erk activation was relatively high in HCC cells [33]. Yet, Akt and Erk activation level was extremely low in the above hepatocytes. Therefore, these hepatocytes may not be targeted by TIC10 due to low basal Akt/Erk activation. As a matter of fact, we failed to detect significant TRAIL expression in TIC10-treated above hepatocytes. Second, TIC10-induced TRAIL expression was shown to only kill cancerous cells, but not normal cells [9]. Nevertheless, the selective cytotoxicity of this compound to cancerous cells is promising for the clinical aspec.

Recent studies have demonstrated that molecularly-targeted therapies could benefit a number of HCC patients [6, 8]. The results of this preclinical study suggest that TIC10 could be further tested as a promising anti-HCC agent, alone or together with DNA-PKcs inhibitors.

Culture of primary cells. As described [5, 47], surgery-isolated fresh HCC tissue specimens of two written-inform consent patients, both administered at Wuxi People’s Hospital (Wuxi, China), were subjected to collagenase I (Sigma) digestion. Primary cancer cells were then pelleted, washed, and re-suspended in the medium described [5, 47]. The two cell lines were named as “Pri_1” and “Pri_2”. Human primary adult hepatocytes were purchased from the Cell Bank of Fudan University (Shanghai, China). The hepatocytes were derived from the liver of a partial hepatectomy patient. The primary hepatocytes were maintained in the same primary cell culture medium [5]. Experiments and protocols requiring human tissues were approved by the Internal Review Board (IRB) and Ethics Committee of all authors’ institutions, and were according to the principles expressed in the Declaration of Helsinki.

In vivo anti-tumor efficiency assay. As reported early, HepG2 cells in logarithmic growth phase were injected subcutaneously (s.c.) into the right flanks of female nude mice (6–7 weeks old, 18-19 grams). When tumors reached around 100 mm3 (probably 2-3 weeks), mice were randomized into four groups (10 mice per group). Treatment was described in the text. Tumor volume was calculated through the established formula as reported [5, 53, 54].

Statistical analysis. Data were presented as mean ± standard deviation (SD). Statistics were analyzed by one-way ANOVA followed by a Scheffe’ and Tukey Test (SPSS 15.0). Significance was chosen as p < 0.05. IC-50 was calculated by the SPSS software.

All authors conceived the idea and designed the work, contributed to acquisition of data.