Infiltrating ductal carcinoma (IDC) is a rare histologic subtype of prostate cancer. We investigated the clinicopathological features and prognosis of IDC compared with acinar cell carcinoma (ACC). We identified 3814 men diagnosed with prostate cancer between 2004 to and 2013 in the Surveillance, Epidemiology, and End Results database, including 511 IDC and 3303 ACC cases. Prostate cancer-specific survival (PCSS) was compared using univariate and multivariate Cox proportional hazards models. Generally, IDC occurred in older men (≥ 65 years old) and presented with larger sizes, and higher grades, American Joint Committee on Cancer (AJCC) stages, AJCC T stages, lymph node positive rates and metastasis rates. Men with IDC were less likely to undergo radical prostatectomy, but more likely to be treated with adjuvant radiation than men with ACC. Five-year PCSS rates were significantly worse in IDC. In the multivariate analysis, patients with ACC had a better PCSS than patients with IDC. In conclusion, IDC has unique clinicopathological characteristics and has worse prognosis than ACC. Multivariable Cox regression analysis showed that age over 85 years, higher grade and T stage, and metastasis at diagnosis were independent prognostic factors of worse survival outcomes, whereas radical prostatectomy was an independent prognostic factor of better survival outcomes.

Infiltrating ductal carcinoma (IDC) is a rare subtype of prostate cancer (PCa) and is commonly mixed with acinar elements [1]. The overall incidence of IDC is low, with an incidence ranging from 0.5% to 6% of all diagnosed PCa cases [2, 3]. Previous studies have revealed some of the characteristic properties of IDC. Although its rarity has prevented researchers from firmly defining the prognostic features of IDC, the data have suggested a less favorable clinical outcome for these cases compared with acinar cell carcinoma (ACC) cases [4, 5].

Because of its low incidence, most of the available studies are case reports or retrospective studies. Given the limited available data, a comprehensive summarization of the clinicopathological characteristics and prognostic factors associated with IDC is lacking. Therefore, theprognostic values of demographic and clinicopathological characteristics in IDC remain unclear. Previous studies [4, 5] have often lacked a detailed description of the clinical characteristics of IDC. Further, most studies lacked adjustments for confounding factors. A better understanding of the prognostic factors of IDC is needed as this information will be useful for physicians to make better therapeutic decisions. Thus, it is significant to explore the clinicopathological demographics and prognostic factors of IDC in a large population. This study used data extracted from the Surveillance, Epidemiology, and End Results (SEER) database to determine and compare survival outcomes in patients with IDC and ACC. We sought to determine the prognostic factors that may contribute to survival differences between these two histologic subtypes of PCa.

Table 1: Characteristics of patients with IDC compared to ACC

a. P-value (Chi-square test) to compare the IPC and IDC groups.

Comparison of survival between IDCs and ACCs

As shown in Kaplan–Meier plots, PCa-specific survival (PCSS) was worse in patients with IDC than in patients with ACC (P < 0.001, Figure 1). The five-year PCSS rates in IDC and ACC were 72.32% and 92.98%, respectively (P < 0.001). A Cox regression analysis was used to explore the effects of baseline characteristics on PCSS (Table 2). In the univariate analysis, some prognostic indicators were found to be significantly associated with PCSS. These included the year of diagnosis, age, marital status, tumor size, AJCC stage, AJCC T stage, tumor grade, surgery type, radiation, Gleason score, LN status, and tumor metastases (Table 2). Thus, all of these variables were included in the multivariate analysis to confirm the prognostic value of the significant factor identified in the univariate analysis (Table 2). However, after adjusting for other prognostic factors and performing the multivariate analysis, year of diagnosis, marital status, tumor size, AJCC stage, radiation, Gleason score, and LN status were no longer significant independent prognostic factors (Table 2).

b. Not married including divorced, separated, single (never married) and widowed. 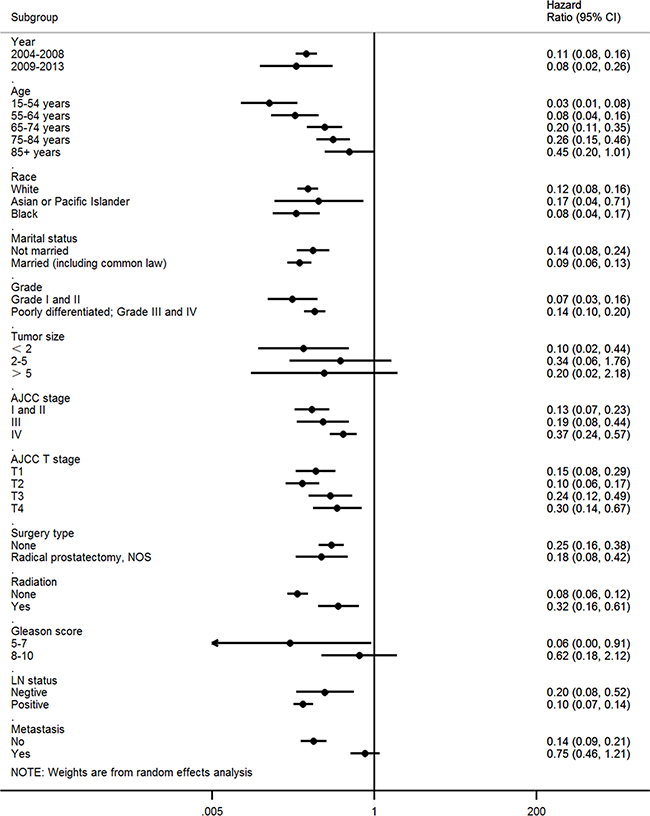 To the best of our knowledge, only Meeks et al. [4] has comprehensively described the features of IDC. However, the study Meeks et al. did not analyze some important demographic and clinicopathological characteristics of patients, including marital status, grade, tumor size, AJCC stages, and Gleason score. It is particularly noteworthy that this is the first study to evaluate the characteristics of Asian and Pacific Islander men with PCa. In multivariate Cox regression analysis, Asian and Pacific Islander ethnicities were not independent prognostic factors of IDC. To illustrate the subgroup analyses, we generated a forest plot. This graph showed a superior prognostic value for IDC among individuals of Asian or Pacific Islander ethnicity. Additionally, this study is the first to report the clinicopathological features and survival outcomes of patients over 85 years of age. In multivariate Cox regression analysis, age over 85 years was an independent prognostic factor. However, in the subgroup analyses, age over 85 years did not have a superior prognostic value for IDC.

To date, our research represents the most comprehensive study of IDC, including the most complete description of tumor and clinicopathological characteristics. Our results showed that IDC has unique clinicopathological characteristics. After summarizing the tumor and clinicopathological characteristics of IDC, we found that IDC was associated with a higher grade, a larger tumor size, increased LN involvement, latter AJCC stages, higher AJCC T stages, less radical prostatectomy rate, higher radiation rate and higher tumor metastasis rate. Some of these results are in agreement with those of previous reports [4–7]. In univariate analysis, survival was reported to be significantly worse in patients with IDC than those with ACC, which is consistent with previous studies [4, 5, 8]. Collectively, the results of a multivariate Cox regression analysis showed that the survival was also worse in the IDC group. Further, these results showed that the IDC histological type itself is an independent prognostic factor. A subgroup analysis was performed to identify the underlying factors that contributed to this phenomenon. Interestingly, the outcomes of the subgroup analyses indicated that the Gleason score had no superior prognostic value for IDC.

The outcomes of this research have several therapeutic implications. We found that the histological type was an independent prognostic factor in multivariate analysis. This finding indicates thatfor IDC management should be individualized and tailored. IDC is a rare subtype of PCa with poor prognosis. [9] In terms of worse survival outcomes of IDC, timely measures are needed to successfully manage patients with this rare subtype. Moreover, both the multivariate and subgroup analyses indicated that the Gleason score is not a prognostic factor for IDC. Although the Gleason score is commonly used to evaluate the biological behavior of PCa, cliniciansmay need to take into account other prognostic factors rather than the Gleason score in order to accurately evaluate patients with the IDC subtype.

There are several limitations to this study. First, the SEER database did not include prostate-specific antigen records until 2010, which precluded us from obtaining potentially relevant prognostic factor data on PSA. Second, we enrolled patients who were diagnosed with PCa between 2004 and 2013 as large amounts of useful data including tumor size, Gleason score, LN status and metastasis at diagnosis on PCa were not available before 2004. This may have resulted in bias, and thus, could decrease the external validity of our results [10].

The IDC subtype of PCa has unique clinic-opathological characteristics and is associated with a worse prognosis compared with ACC. Multivariable Cox regression analysis showed that age over 85 years, grades III and IV, T3 and T4, and metastasis at diagnosis were identified as independent prognostic factors of worse survival outcomes, whereas radical prostatectomywas found to be an independent prognostic factor of better survival outcomes. However, in subgroup analyses, age over 85 years and metastasis at diagnosis were no longer significant predictors of worse survival outcomes. Further validation of these results in a large population may help to clarify this issue. Improving our understanding of the clinical and biological features of IDC may offer more individualized and tailored therapies for PCa patients.

Permission was obtained to access the SEER research data files using the reference number 12256-Nov2015. The data released by the SEER database do not require informed patient consent, and our study was approved by the Ethical Committee and Institutional Review Board of The First Affiliated Hospital of Fujian Medical University. The methods were performed in accordance with the approved guidelines.

We used the SEER dataset that was released in April 2015. This dataset included data from 18 population-based registries (1973–2013). Data for tumor characteristics were recorded based on the International Classification of Diseases for Oncology Version 3 (ICD-O-3). The patient inclusion criteria were as follows: male sex, over 15 years of age, first and only cancer diagnosis of PCa, prostate gland was the only primary site, pathological confirmation of IDC (ICD-O-3 8500/3) and ACC (ICD-O-3 8550/3), surgical type,American Joint Committee on Cancer (AJCC) stages I–IV, and diagnosis between 2004 and 2013. Patients diagnosed with PCa before 2004 were excluded because the SEER database was not available for some important tumor characteristics, including tumor size, derived AJCC stage group (6th), derived AJCC T (6th), Gleason score and metastasis at diagnosis until 2004. Additionally, patients diagnosed with PCa after 2013 were excluded as the SEER database was available before 2013 and adequate follow-up time could not be ensured. Patients diagnosed with PCa based on a death certificate or autopsy was also excluded. A total 3814 patients were enrolled in this study. Among these patients, 511 were diagnosed with IDC and 3033 were diagnosed with ACC.

In this study, PCSS was treated as the primary study outcome. It was calculated from the date of diagnosis to the date of death secondary to PCa. Patients who died from other causes unrelated to a PCa diagnosis or who were alive were censored on the date of death or the date of last contact. The cut-off date was predetermined by SEER 2015 submission databases, which contained data of deaths until 2013. Thus, December 31, 2013 was the study cut-off date.

Clinicopathological features were compared across groups using Pearson’s Chi-square tests, Fisher’s exact tests, Cochran-Mantel Haenszel, or Chi-square tests. The Kaplan-Meier method was used to generate survival curves. Log-rank tests were used to analyze the differences between curves. Univariate and multivariate Cox hazard analyses were used to determine factors that are correlated with PCSS, and HRs and 95% CIs were reported. Subgroup analyses were performed to evaluated the HRs of IDC versus ACC. In order to compare the predictive value of each prognostic factor on PCSS, we generated a forest plot. SPSS version 22.0 (IBM Corp, Armonk, NY) was used to perform statistical analyses. Kaplan-Meier curve was plotted with GraphPad Prism version 5 (GraphPad Software, Inc., La Jolla, CA, USA). A two-sided P < 0.05 was considered to indicate statistical significance [11].

The authors wish to thank Steve from SEER*Stat technical support for his assistance with the data extraction.