A heterogeneous group of cancers for which the site of origin remains occult after detailed investigations is defined as carcinomas of unknown primary origin (CUPs). Because patients with CUP have a dismal prognosis, we have analyzed CUPs to highlight the implication of clinicopathologic factors related with patient survival. A total of 106 consecutive cases of CUP were collected. A two-step strategy of immunohistochemistry to assess CUPs according NCCN Guidelines is used to separate carcinomatous tumors and subtype carcinomas. Median follow up of censored patients was 26 months. Median survival time of whole patients was 13 months (95% confidence interval [CI], 8.43 - 19.1 months), with one, two and five-year survival rate of 53.7%, 35.1%, and 30.5%, respectively. Factors related with shorter overall survival was adenocarcinoma histology (P=0.001), increased CA19-9 (P=0.003), increased CEA (P=0.047), increased LDH (P<0.001), CK20 positivity (P=0.002), presence of bone metastasis (P=0.017), metastasis not confined to the lymph nodes (P=0.015), unfavorable clinical group based predefined category (P=0.017), and patients with no treatment (P<0.001). Multivariable analysis with cox regression model revealed factors related with overall survival; cases belonged to Culine’s poor risk group (HR, 3.88; 95% CI, 1.75-8.64; P=0.001) and CK20 positivity (HR, 3.31; 95% CI, 1.42-7.70; P=0.005). In conclusion, the CK20 expression profile is a prognostic factor in patients with CUP and initial stratification of patient with Culine’s model may provide a prognostic information in these patients. Assessment of clinical implication of these factors in the context of site specific therapy needs to be evaluated.

Carcinoma of unknown primary origin (CUP), also known as occult primary tumor is defined as histologically proven metastatic malignant tumors whose primary site cannot be identified by clinical manifestation, radiographic and pathologic examinations [1, 2]. It comprises heterogeneous groups of tumor, clinically and histologically and about 3% to 5% of all newly diagnosed malignant tumors are classified as CUP [2].

Among CUPs, adenocarcinoma comprises the most common histologic type in reported studies [3, 4]. Generally, patients of CUP have poor clinical prognosis with limited life expectancy. Median survival of 3 months in extranodal adenocarcinoma and 8 months in metastatic adenocarcinoma limited to lymph node are expected in population based analysis [4]. In addition, it is rapidly invasive with early dissemination, and shows unpredictable pattern of metastatic spread.

Although the primary site of a CUP remains unknown in 20-50% of patient even after a full diagnostic workup [5], it is known that a subset of patients with CUP shows favorable clinical behavior. Identification of this group seems pivotal in the management of patients. Favorable subsets of patients accounts for about 20% of those with CUPs, and include women with papillary adenocarcinoma of the peritoneal cavity, women with adenocarcinoma involving the axillary lymph nodes, poorly differentiated carcinoma with midline distribution, poorly differentiated neuroendocrine carcinoma, squamous cell carcinoma involving cervical lymph nodes, adenocarcinoma with a colon-cancer profile, men with osteoblastic bone metastases and elevated prostate-specific antigen, isolated inguinal lymphadenopathy with squamous histology, and patients with one, small, or potentially resectable tumor [6].

The best approach of stepwise algorithm with immunohistochemistry (IHC) of biopsied tissue was suggested to provide a specific therapy against the most likely primary site. Although a number of recent studies discussed the use of gene expression-based tests and methylation profile in the setting of CUP, practical value of this approach in the daily clinical practice is still limited [7-10]. Thus, a cost-effective and systemized IHC with identification of clinicopathologic factors related with the patient prognosis are clinically relevant [11, 12]. Most of previous reported publication focused on the usage of appropriate IHC panel for the differential diagnosis. Limited number of publication described general clinical behavior and clinicopathologic factors related with them [13, 14]. In the present study, consecutive cases of CUPs from one institute were analyzed to highlight the implication of clinicopatholoic factors related with patient survival. 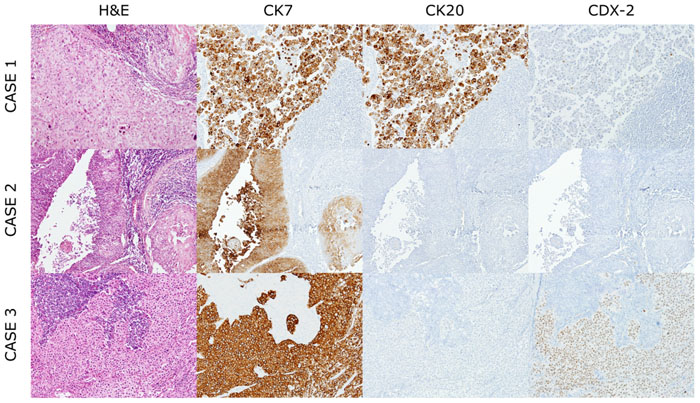 About 72.6% (77 out of 106) of patients were treated by chemotherapy and radiation concurrently or sequentially. Metastasis to liver, lung, bone and brain was noted in 10 (9.4%), 17 (16.0%), 28 (26.4%) and 10 (9.4%) patients, respectively. Tumor markers at the time of diagnosis were assessed and elevated carcinoembryonic antigen (CEA), cancer antigen (CA) 19-9, CA125, CA15-3, and alpha fetoprotein (AFP) were recorded in 32 (30.2%), 26 (24.5%), 24 (22.6%), 6 (5.6%) and 3 (2.8%) patients, respectively. When CUP patients were categorized into the ‘favorable’ and ‘non-favorable’ groups based on predefined criteria, the number of cases belonging to the favorable group was 31 (29.2%), compatible with the previously known range of about 80%. Among these 19 patients (17.9%) presented as squamous cell carcinoma of the cervical lymph nodes, 4 patients presented as poorly differentiated carcinoma with neuroendocrine characteristics proven by immunohistochemistry, 6 patients with adenocarcinoma with colon-cancer profile and 2 male patients with blastic bone metastases and elevated prostate-specific antigen.

Univariate analysis of clinicopathologic factors related to the patient’s survival 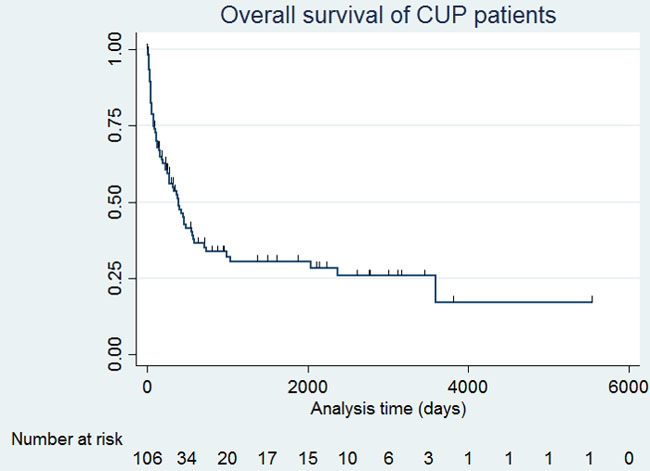 Figure 2: A Kaplan-Meier graph of overall survival of all patients. 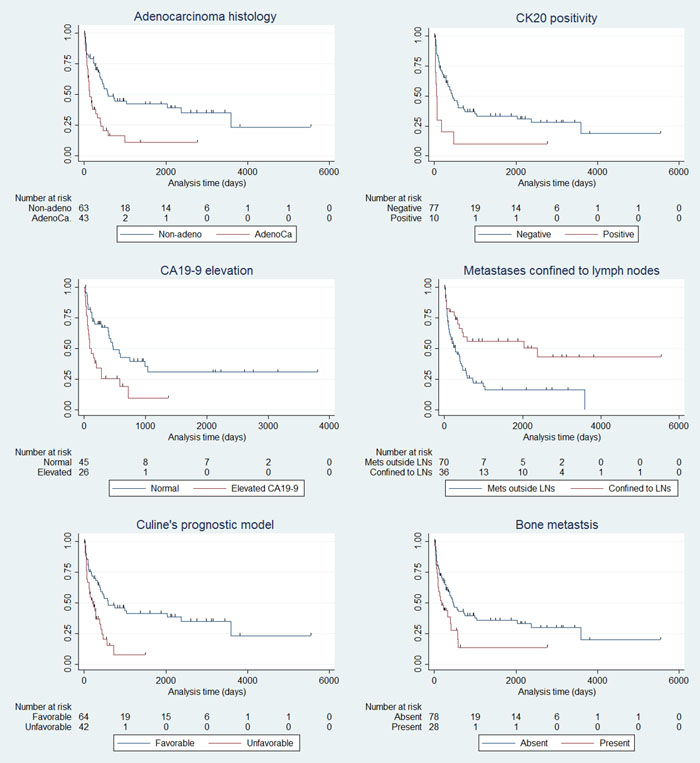 Multivariable analysis of clinicopathologic factors related to the patient’s survival

The clinical presentation of CUP that showed early and usually aggressive metastatic dissemination with limited life expectancy require the identification of favorable patient groups. In the present study, a consecutive series of cases of CUPs in one institute was analyzed to identify the clinicopathologic factors related to patient survival. Limited information was provided by previous literature regarding the natural course of the disease and the biologic mechanism that explain the clinical manifestation of CUP. In the early nineties, a large series with 657 consecutive patients, reported decreased survival in cases with men, more organ site, adenocarcinoma histology, metastasis to lung, bone and pleura [14]. Since then, the importance of biomarkers and their identification by IHC has been extensively researched. We validated previously reported clinicopathologic factors associated with worse prognosis such as adenocarcinoma histology, multiple metastases beyond lymph nodes, bone metastases and good risk group based on Culine’s prognostic model in this cohort. Several clinicopathologic factors related with adverse clinical outcome of CUPs were suggested including adenocarcinoma histology, poor performance status, multiple disseminated metastases, and elevated LDH, compatible with the results of this study, and they are summarized in Table 4.

Table 4: Previous studies of prognostic factors in patients with CUP

Unique findings in this cohort were the relation between expressions of biomarkers with the unfavorable clinical behaviors. CA19-9, CEA, and LDH elevation in the serum test and CK20 positivity in the tumor tissue were proven to be related with the shorter overall survival in univariate analysis. Especially, CK20 positivity was related to unfavorable overall survival in the multivariable analysis. Prognostic value of CK20 expression was validated in a subset of urothelial carcinomas and colorectal carcinomas [15-17]. This type of keratin, CK20, is a major cellular protein of mature enterocytes and goblet cells and specially expressed in the gastric and intestinal mucosa, suggesting that CUP with immunophenotype of enterocytes may have intrinsic aggressive biological behavior.

The potential limitation of this study is that the patient survival was not separately analyzed in the context of therapy given to each patient. Ever since new, broad spectrum antineoplastic chemotherapeutic drugs were introduced around late 1990s, combination of taxane and a platinum agent or gemcitabine and a platinum agent have been most commonly used for the treatment of the CUPs, but growing evidence showed a site-specific therapy based on the identified primary tumor type result in improved patient survival [3, 18]. In this regard, recent research showing epigenetic profile guided tumor type specific therapy showing improved overall survival compared with that in patients who received empiric therapy is astonishing [10]. Tests based on mRNA or miRNA profile are commercially available and they appear to show reproducible results. Although the practical use of these approaches need to be studied in the light of cost and feasibility in the clinical practice, identification of subgroups that may be eligible for site specific therapy seems to be the most important question for the improvement of survival of patient with CUP.

Prognostic model suggested by Culine was also validated in this cohort, suggesting that it would be appropriate to include this model in early clinical evaluation, considering its conciseness. Recently, Culine’s model was validated in 47 cancer of unknown primary origin in adolescents (CUP-AYA) [19]. Nevertheless, the clinical utility of this model need to be regarded in the context of the treatment as the current NCCN guideline suggests the site-specific treatment of CUP based on the information from the work-up as best as can be done.

In conclusion, clinicopathologic factors related to the patient survival was analyzed, revealing CK20 expression, adenocarcinoma histology, multiple metastases beyond lymph nodes, bone metastases, poor risk groups based on Culine’s models are factors related unfavorable outcome. Significance of these factors need to be considered in the context of eligibility of patients for the site-specific therapies.

This retrospective study was approved by the Institutional Review Board of Yonsei University Medical Center (approval number: 4-2015-0830). A total of 106 consecutive cases from 106 patients of carcinoma of unknown primary origin were collected from the archives of pathology in Severance hospital during the period of 2000 to 2015. Patient records/information were anonymized and de-identified prior to clinicopathologic analyses. Vital status of the patient was confirmed by the national tumor registry and electronic medical record of the patients.

The diagnostic inclusion criteria were adopted from the research of previously reported literatures [1, 20].

No definite increased specific serum tumor marker that can explain the lesion.

Limited to epithelial and undifferentiated cancers

Stratification of the patients

To categorize the cases into ‘favorable’ and ‘non-favorable’ groups, the following criteria were adopted from literatures [6].

Women with papillary adenocarcinoma of the peritoneal cavity

A representative area of H&E stained slides of each tumor and the corresponding spot was marked on the paraffin block. The area was punched out by the biopsy needle and a 3-mm tissue core was placed into a recipient block. More than 2 tissue cores were extracted to minimize extraction bias. Each tissue core was assigned.

We used a two-step strategy of IHC to assess CUPs according NCCN Guidelines [1]. First, we identified that tumors with occult primary tissue of origin were carcinomatous tumors using the following antibodies: broad spectrum cytokeratin (CK), S-100 protein, HMB45, and CD45. Next, staining for CK7 and CK20 is used to subtype carcinomas. We also used CDX-2 antibody because a recent report presented that patients with CUPs with lower gastrointestinal profile (CDX-2+, CK20+, CK7-) may have benefit from site-specific therapy [18]. Neuroendocrine differentiation was identified using IHCs for synaptophysin, chromogranin and CD56 in cases with histology with organoid arrangement such as solid/nesting, trabecular or gyriform pattern. Information of primary antibodies is presented as Supplementary Table 1.

Formalin-fixed, paraffin-embedded tissue sections from the tissue microarray were prepared for IHC. Briefly, 5-μm-thick sections were obtained with a microtome, transferred into adhesive slides, and dried at 62°C for 30 minutes. IHC was performed using an automated staining instrument (Ventana Discovery® XT, Ventana Medical System, AZ, USA) according to instruction.

This study was supported by a faculty research grant of Yonsei University College of Medicine [6-2015-0087 and 6-2016-0034 to SKK.]; the Basic Science Research Program through the National Research Foundation of Korea (NRF) funded by the Ministry of Education, Science and Technology [NRF 2014R1A1A1002443 to JC.].

The authors declare that they have no conflicts of interest in the article.