﹡ These authors have equal contribution to this work

Nitrobenzylthioinosine (NBTI), a specific inhibitor of type 1 equilibrative nucleoside transporter, could regulate the extracellular adenosine concentration and have protective roles in seizures. However, the protection mechanism of NBTI in seizures remains poorly understood. Here, the expression pattern and subcellular distribution of adenosine A1 receptor were detected by Western blot analysis and double-labeling immunofluorescence staining in Lithium Chloride-Pilocarpine induced epileptic rat model. At 24 h after pilocarpine induced rat seizures, hippocampal slices were prepared and the evoked excitatory postsynaptic currents (eEPSCs) amplitude of pyramidal neurons in hippocampus CA1 region was recorded using whole-cell patch clamp. In vivo, compared to control group, Western blotting analysis showed that the expression of adenosine A1 receptor protein was increased at 24 h and 72 h after seizure, didn’t change at 0 min and 1 w, and decreased at 2 w. Double-label immunofluorescence revealed that adenosine A1 receptor was mainly expressed in the membrane and cytoplasm of neurons. In Vitro, adenosine decreased the eEPSCs amplitude of pyramidal neurons in hippocampus CA1 region, NBTI also had the same effect. Meantime, NBTI could further inhibit eEPSCs amplitude on the basis of lower concentration adenosine (50µM), and adenosine A1 receptor inhibitor DPCPX partially reversed this effect. Taken together, we confirmed that the expression of adenosine A1 receptor protein was increased in the early seizures and decreased in the late seizures. At the same time, NBTI mimics adenosine to attenuate the epileptiform discharge through adenosine A1 receptor, which might provide a novel therapeutic approach toward the control of epilepsy.

Epilepsy is a chronic brain disorder which characterized by recurrent unprovoked seizures and affects tens of millions of people in the world [1, 2]. High seizure frequency and various kinds of burdens are the main factors influencing the quality of life in epileptic patients [3, 4]. Increased seizure frequency is exactly associated with worse outcomes and the burdens of epilepsy. Of course, new antiepileptic drugs (AEDs) may reduce these adverse events and can improve the prognosis of patients with epilepsy [5]. However, the existing AEDs fail to prevent or cure the 20-30% of epileptic patients [6, 7].

Adenosine, an endogenous inhibitor of neuronal discharges [8], is released extensively during seizures, which could inhibit hippocampal glutamatergic synaptic transmission through interacting with pre- or postsynaptic adenosine A1 receptors [9-11]. At the same time, adenosine, as an endogenous anticonvulsant, could influence the stability of γ-aminobutyric acid type A receptor through the interaction with adenosine receptors [12]. Previous studies have shown that modulation and activation of adenosine A1 receptor could influence the frequency of spontaneous recurrent seizures and hippocampal excitability of chronic pilocarpine epileptic rats, and also have an anticonvulsant effect on seizures elicited from piriform cortex kindling by electrical stimulation [13, 14].

Type 1 equilibrative nucleoside transporter (ENT1) is one kind of most abundant and widely distributed in plasma membrane nucleoside transporter in mammalian cells and tissues [15, 16], and ENT1 is regarded as a critical transporter for the regulation of adenosine, and for the cellular uptake of chemotherapeutic nucleoside analogs [17, 18]. Previous study has illustrated that ectogenic adenosine A1 agonists that are transported by ENT1 could be applied to target central nervous system (CNS) disorders because of its widely distributed in the brain [19]. In addition, nitrobenzylthioinosine (NBTI) [20], a specific inhibitor of ENT1, could retard the adenosine disappearance from extracellular cleft through blocking adenosine uptake into cells, and has protective effects during seizures [21-23]. What is more, pretreated with NBTI could prolong the latency to reach the seizure status of animals [22, 23].

Based on the physiological roles of adenosine A1 receptor and NBTI in the CNS, we hypothesized that inhibition of glutamergic neurotransmission by adenosine via its A1 receptor may be mimicked by NBTI to attenuate the epileptiform discharge of hippocampal neurons from epileptic rats. This study was designed to determine the expression pattern and cellular distribution of adenosine A1 receptor in lithium chloride-pilocarpine induced epileptic rats using Western blot analysis and double-labeling immunofluorescence staining, and to evaluate the role of NBTI on the epileptiform discharge of hippocampus neurons from epileptic rats using the whole-cell patch clamp technique. 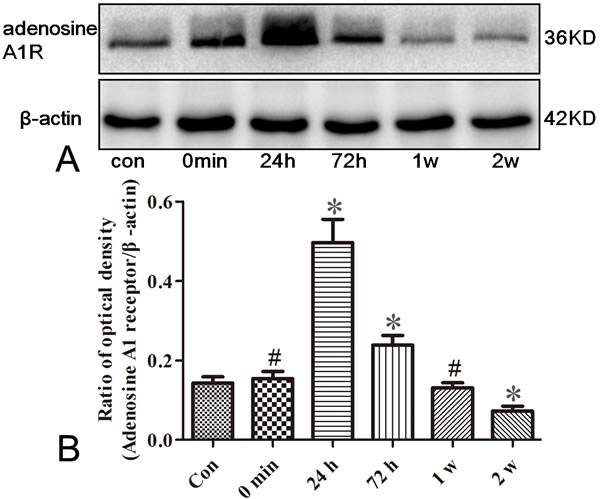 Localization of adenosine A1 receptor in epileptic rats 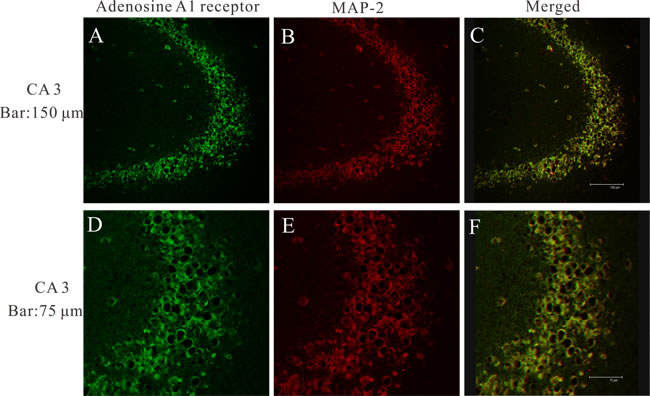 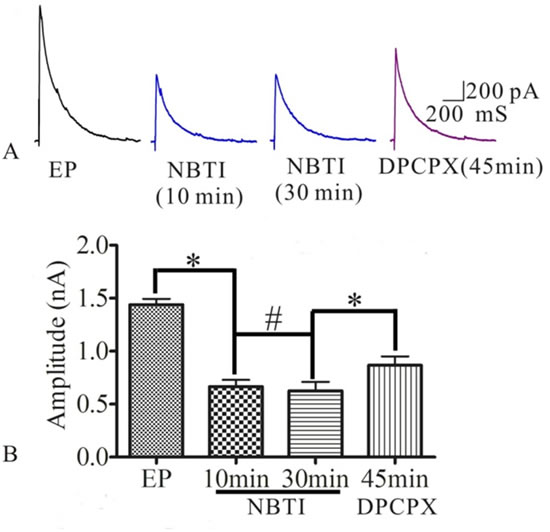 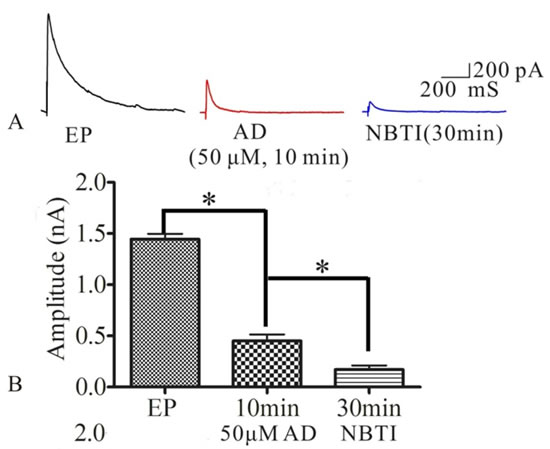 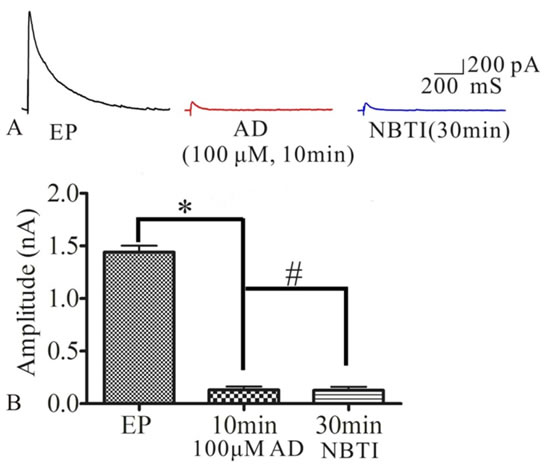 It is well-known that adenosine could inhibit the excitability of neurons through regulating synaptic transmission, synaptic activity and suppressing synchronous discharges [8, 25, 26, 40]. ENT1, one subtype of equilibrative nucleoside transporter, is regarded as a critical transporter for the regulation of adenosine and glutamatergic neurotransmission [18]. Under the condition of ischemia and hypoxia, ENT1 was over expressed and could reduce extracellular adenosine levels in mouse neurons [41], while ENT1 inhibitor (NBTI) could prolong onset latency for the development of seizures and status epilepticus in the epileptic animal models through increasing extracellular adenosine levels [21-23], and reduce evoked EPSC in lamina II neurons of rat spinal dorsal horn [24], suggesting that NBTI could reduce the excitability of neurons though adenosine signaling. Building on the earlier research, we have found that ENT1 played an important role in the epileptogenesis, and its specific inhibitor NBTI could attenuate seizure severity and prolong onset latency in pilocarpine-induced seizure rats [42]. In this study, we observed that adenosine decreased the eEPSCs amplitude of pyramidal neurons in hippocampus CA1 region at 24 h after pilocarpine-induced rat seizures, NBTI also had the same effect. Meantime, NBTI could further inhibit eEPSCs amplitude on the basis of lower concentration adenosine (50µM), and adenosine A1 receptor inhibitor DPCPX partially reversed this effect. So we thought that NBTI could mimic adenosine reducing eEPSCs amplitude through adenosine A1 receptor.

All experimental procedures were approved by the Commission of Zunyi Medical College for the Ethics of Experiments on Animals in accordance with China Animal Welfare Legislation standards. The adult male Sprague-Dawley (SD) rats weighing about 200 g were obtained from the Experimental Animal Center of Zunyi Medical College, China. The rats were maintained in a temperature controlled room (22-24 oC) with a 12 h light and 12 h dark cycle as well as free access to food and water. The rat model of epilepsy was produced as before [42]. Briefly, male rats were intraperitoneal (i.p.) injected lithium chloride (127 mg/kg, Sigma-Aldrich Co., St. Louis, MO, USA) 20 h prior to the administration of pilocarpine (i.p. 50 mg/kg, Sigma-Aldrich). Furthermore, the rats were pretreated with atropine methyl nitrate (1 mg/kg) 30 min prior to pilocarpine administration. The rats received repeated i.p. injections of 10 mg/kg pilocarpine every 30 min until they developed epileptic seizures. The epileptic seizures were evaluated by Racine score [43]. Only convulsive seizures reached to the stage 4 or 5 were considered as being successfully kindled [44]. All rats were continuously monitored by a video recording system after injection of pilocarpine until they were sacrificed. The normal rats in control group were administration of an equal volume of saline instead of pilocarpine. The seizure rats were sacrifced at 0 min, 1, 3, 7 and 14 days after seizures, while the control group of rats were sacrifced at day 1, and the brain tissues were removed immediately for analysis (each group n = 5).

Western blotting was performed as previous report to detect the expression of adenosine A1 receptor in normal and epileptic rats [45]. The rats’ hippocampal tissues were stored in liquid nitrogen for western blotting analysis. According to the manufacturers’ instructions, protein was extracted, and the protein concentration was measured by the Enhanced BCA Protein Assay Kit (Beyotime Institute of Biotechnology, Shanghai, China). A total of 50 μg protein was separated by 10% SDS-PAGE and then transferred to polyvinylidene fluoride membranes (Millipore Corp, Massachusetts, USA, 250 mA, 60 min). The primary antibodies were used as follows: rabbit anti-adenosine A1 receptor (1:500, Santa Cruz Biotechnology, CA) and rabbit anti-β-actin (1:1000, Beijing 4A Biotech Co., Ltd, Beijing, China). The membranes were washed 4 ×10 min with Tween-20/Tris-buffered saline and incubated with the appropriate diluted horseradish peroxidase-tagged secondary antibody (1:3,000, Santa Cruz Biotechnology, CA). The immunoreactive protein bands were visualized using an enhanced chemiluminescence substrate kit (Beyotime) before digital scanning (Bio-Rad Laboratories, California, USA). Blots intensities were calculated with the Quantity One software (Bio-Rad Laboratories, Hercules, CA, USA).

To detect the location of adenosine A1 receptor in hippocampus of epileptic rats, immunoreactivity of adenosine A1 receptor was observed by immunofluorescence. Brain hippocampus tissues was fixed in 4 % paraformaldehyde overnight at 4 oC, then were respectively put in 20% and 30% graded sucrose solution for 48 h. Followed, 10-μm-thick frozen sections were cut on a freezing microtome and mounted on the polylysine-coated slides for immunofluorescence. The sections were dried at room temperature for 8 min and immersed in acetone for 15 min. After washed with PBS three times (5 min per time), the slices were heated in 0.01 M citric acid (pH 6.0) for 20 min at 92-98 oC for antigen recovery. Then, the slices were permeabilized with 0.5 % Triton X-100 and incubated in normal goat serum (Zhongshan Golden Bridge, Inc., Beijing, China) for 30 min. Slices were incubated in rabbit anti adenosine A1 receptor (1:100; Santa) and mouse anti-MAP2 antibody (1:100; Boster, Wuhan, China) overnight at 4 oC. After washed with PBS three times (5 min per time), the slices were incubated with anti-rabbit-FITC (green) and anti-mouse-TRITC (red) (1:100, Zhongshan Golden Bridge) for 60 min and mounted with 50 % glycerol and 50 % PBS in the dark. The fluorescence was detected by a laser scanning confocal microscopy (Leica, Heidelberg) on an Olympus IX70 inverted microscope (Olympus, Tokyo, Japan).

The following experiments were performed at 23 oC. For recording the excitatory postsynaptic currents (EPSCs), a patch pipette (2-4 ΩM) was filled with intracellular solution (mM): 130 Cs-methanesulfonate, 10 HEPES, 10 CsCl, 4 NaCl, 1 MgCl2, 1 EGTA, 5 NMG, 5 MgATP, and 0.5 Na2GTP and 12 phosphocreatine, pH 7.2 (275-290 mOsm). Bicuculline (10μM) was added to block GABA mediated components in ACSF and record eEPSCs. In the eEPSCs recordings, a bipolar stainless steel electrode was placed in about 150 μm dorsolateral region of the recorded neurons, with a 40 μS, 60 μA and 0.1 Hz stimulus. Membrane potential was held at +40 mV. The signal was amplified using a Multiclamp 700B amplifier (Axon, USA) and digitized with a Digidata 1322A. Data were filtered at 10kHz and then recorded with pClamp 9.2 software (Molecular Devices, Sunnyvale, CA, USA).

All data were expressed as mean ± standard error of mean (SEM), and the statistical analyses were performed with the SPSS 18.0, statistical comparisons were made by one-way ANOVA or Student’s t test, P < 0.05 was considered significant.