Pulmonary disease in SS has a extensive rate of 9% to 90% in different case series [18-21]. Pulmonary cysts have been reported in several studies to occur in 7.4% to 46.2% of patients with SS [18-20, 22-24]. Few studies have evaluated the nature of cystic abnormalities on chest imaging in patients with SS [18,19, 22, 25, 26]. Typical characteristics of the cystic pattern associated with SS on high resolution computed tomography (HRCT) imaging include a broad differentiation in cyst size and inner construction within cysts, positional simplification of parenchymal structure, perivascular and generally basilar dominating allocation and frequent association with ground glass opacities and nodules [26].

We show here a female patient who was diagnosed pSS with diffuse cystic lung changes developed SLE two years later. This report could be useful for coming research of diagnosis and treatment for this type of disease.

Then she was admitted to our hospital again in March 2016 because of the aggravation of cough, dyspnea, xerostomia and xerophthalmia after drug withdrawal. She also reported accompanying clinical symptoms of painful shoulder-joints and knee-joints in the past month. She denied fevers, chills or shivers. She did not have any surgical history. Negative family history for coronary artery disease and ovarian cancer was confirmed. She had never smoked, used alcohol or illicit drugs and had no environmental exposures. Vital signs on admission showed heart rate of 84/minute, respiration rate of 21/minute, blood pressure of 128/78mmHg, axillary temperature 36.6 oC. Physical examination revealed coarse breath sounds bilaterally. Her eyes and mouth were extremely dry. Sheet red rash was seen on bilateral lower limb skin. Swollen knee-joints were seen.

(Normal range in our unit: normal range of clinical laboratory in Qilu Hospital of Shandong University) 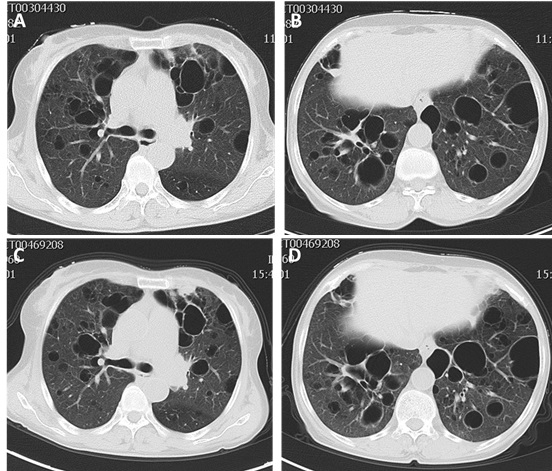 Eventually, this patient was diagnosed pSS presenting diffuse cystic lung changes developed SLE. During this hospitalization, she was started on oral hydroxychloroquine (200mg bid), intravenous methylprednisolone (80mg qd) and antibiotics of sulbactam and cefoperazone (2g q12h) therapy. On the seventh day of hospitalization, pulse therapy was discontinued and she was started on oral prednisone 60 mg daily with hydroxychloroquine (200 mg bid). She felt clinical symptoms improved again and laboratory examination showed ESR decreased from 69mm/h to 18mm/h. On the tenth day of hospitalization, the dosage of prednisone was reduced to 40 mg and she was discharged home.

In this case reported here, differential diagnoses like lymphangioleiomyomatosis (LAM) were unlikely. SACE was in normal range. Besides, she did not have medical history of pneumothorax.

The patient has been followed up for 9 months. She denied any aggravation of clinical symptoms. Hence no further imaging examinations or laboratory tests were pursued and she continued to be managed clinically.

SS is a chronic systemic inflammatory disease with lymphocytic infiltration of exocrine glands. SS can exist as a unique presence (pSS) or in combination with other systemic diseases (sSS). While salivary and lacrimal glands are most ordinarily involved, impaired mucosal defense and glandular dysfunction inside of the lung may make it more vulnerable to pulmonary inﬂammation [20]. The case reported here was diagnosed Sjögren’s syndrome in 2014 according to the American and European Consensus Group classification criteria (AECG-criteria) [27], and then developed SLE in 2016 based on the 2012 revision classification criteria for SLE [28]. HRCT images in 2014 and 2016 showed asymmetric multiple cysts of varying size and distribution in both lungs, and did not present an obvious progression in the size, number and distribution of cysts.

That SS can be coexistence with SLE was first reported in 1959 [29] and has since then been documented by several studies [1, 3-17, 30-41]. Reports indicated that 3.7%-19.6% SLE patients were accompanying SS [2, 4, 34-36]. However, rare published reports identified time sequence that pSS preceded SLE [5, 8-17] or SLE preceded SS [4-7] (Table 2). We generally comprehend specific clinical, laboratory, treatment and prognosis features that distinguish SLE-onset SS and SS-onset SLE from SS or SLE only patients. SLE-onset SS were older at SLE diagnosis, showed lower mortality and improved survival estimates when compared with SLE-only patients [4, 34]. SS-onset SLE were significantly older, showed a higher frequency of Raynaud’s phenomenon, anti-SSA and anti-SSB, a lower frequency of severe renal involvement and lower mortality, and presented comparatively stable disease course and benign prognosis that required less vigorous treatment with glucocorticoids and/or immunosuppressant when compared with SLE-only patients [5, 11, 12]. SS-onset SLE were younger and had an increased frequency of arthritis, xerostomia, anticardiolipin antibodies and low levels of C3 and C4 in the serum, perivascular infiltrates in the salivary glands but a lower frequency of interstitial lung disease when compared with SS-only [11, 13].

Table 2: Summary of SS-SLE articles that identified time sequence of SS and SLE

Cystic lung disease (CLD) have been reported in several studies to occur in 7.4% to 46.2% of patients with SS [18-20, 22-24], and the finding of cyst-only disease appears rare [19, 20, 24, 41]. Only one study evaluated radiologic progression of CLD in SS, finding no progression in the size and number of cysts or pulmonary function decline in most individuals after a median 4-year follow-up [24]. The proof supporting a particular pathologic relevance of CLD in SS is insufficient. Two retrospective studies found that all individuals had cysts and nodules on imaging, one of those targeting 8 individuals with known lung amyloidosis and another showing 5 individuals suffering a known lymphoproliferative disorder [43, 44]. Besides, one retrospective study of 187 patients with biopsy-proven pulmonary amyloidosis showed that 11.2% presented CLD and a strong relevance with SS [45]. Another retrospective study evaluated 22 patients, 11 of which had SS, with LIP proven by biopsy: all patients had centrilobular nodules and ground-glass attenuation, seven had cysts [46]. And one study showed association of lymphoproliferative disorders, which defined as light-chain amyloidosis, monoclonal gammopathy, or malignant lymphoma with CLD [19], but this is not inconsistent with another study which found that CT patterns unlike nonspecific interstitial pneumonia (NSIP) rarely played a role in the prediction of a pathologic diagnosis [47].

Diffuse cystic lung disease (DCLD) is an uncommon clinical and radiographic presentation with a broad differential diagnosis [48]. Although diseases like LAM, pulmonary Langerhans cell histiocytosis and Birt-Hogg-Dubé syndrome continue to be the prototypical diffuse cystic pulmonary disorders most generally encountered in treatment centers or by pathologists [49, 50], cystic lung changes as the forme fruste of SS should also be concerned. Few studies have evaluated the characteristics of cystic abnormalities on chest radiographic testing in patients with SS [18, 19, 22, 25, 26]. It has been covered that the cystic pattern relating to SS has a typical manifestation on HRCT imaging. Characteristic features include a broad differentiation in cyst size and number, inner construction within cysts, perivascular and basilar predominant allocation, positional simplification of parenchymal structure generating a ‘dissolving lung appearance’ and frequent association with ground glass opacities and nodules [26]. Those discoveries can be characteristic enough to reduce the necessity for pulmonary biopsy even in defect of proved serologic results or salivary glands biopsy, especially in patients who cannot be tolerant of invasive diagnostic test.

We reported here a patient of pSS with diffuse cystic lung alterations developed SLE, no other reports have described both the SS-onset SLE and diffused cystic lung changes in one patient in details so far. The accurate cause of emerging SLE in patients with SS has not been well known yet. It is a pity that this patient did not perform laboratory and imaging test during 2014-2016 due to some private reasons so that we could not retrieve the dynamic profiles of laboratory parameters levels and imaging changes. While confirmatory invasive tests (bronchoalveolar lavage, transbronchial biopsy, surgical lung biopsy and so on) could not be carried out on this patient because of her difficulty in tolerating invasive procedure, we conjecture that lymphocytic interstitial pneumonia or NSIP is the most likely histopathology pattern upon imaging manifestations and beneficial response to prednisone therapy.

In summary, pSS with diffuse asymmetrical cystic lung changes can precede SLE by several years. When encounter patients of pSS with diffuse cystic lung manifestation emerging clinical and laboratory features of SLE, we should consider the possibility of emergence of SLE several years later. However, more clinical research is needed to establish definitive diagnosis criterion and effective treatment for those cases.