The traditional, retrocolic/antegastric Roux-en-Y choledochojejunostomy is technically complicated, and the incidence of postoperative complications remains high. Here we report the outcome of 59 consecutively treated patients (study group, SG) that underwent a new choledochojejunostomy method in which the jejunal loop is passed behind the antrum pyloricum (retrogastric route). A retrospective comparison was made between this group of patients and 187 patients (control group, CG) that underwent conventional Roux-en-Y choledochojejunostomy (antegastric route). Baseline clinicopathological characteristics were similar in both groups, except for the BMI, which was significantly higher in the SG. The time spent on constructing the anastomosis, as well as overall postoperative complications, did not differ between groups. Compared with the CG, the incidence of postoperative delayed gastric emptying was decreased in the SG, and the time elapsed before the patients’ first postoperative liquid food consumption was shorter. We ascribe these beneficial effects to the superiority of the modified, retropyloric choledochojejunostomy approach, and propose that this surgical technique is particularly suitable for obese patients, especially those with a short ascending bowel loop.

Biliary obstruction is associated with renal failure, body fluid disturbances, and myocardial dysfunction. Roux-en-Y choledochojejunostomy is a common surgical procedure for resolving extrahepatic biliary obstruction and reconstructing biliary-enteric continuity after resection for benign or malignant biliary diseases [1]. The conventional Roux-en-Y choledochojejunostomy is commonly performed using the retrocolic, antegastric route, and is associated with many complications, including bile leakage, reflux cholangitis, anastomotic strictures, delayed gastric emptying (DGE), and other postoperative complications [2-8]. Since these complications may be determined by this conventional route of biliary-enteric anastomosis, it is necessary to pay more attention to the phenomenon.

With ongoing experience surgeons are trying to find improved choledochojejunostomy procedures to avoid them. Although various surgical modifications have been proposed, the results remain controversial and postoperative and long-term complications are still common [5-8] [9-15].

DGE without mechanical obstruction can occur in the postoperative period after upper gastrointestinal tract surgery, such as after gastric surgery and choledochojejunostomy [16-18]. With advances in operative techniques, intensive care medicine, interventional radiology, and better patient selection and preparation, the perioperative mortality of pancreatic and biliary surgery in high-volume centers has decreased markedly over the past two decades [16, 19]. Despite this improvement in mortality, postoperative morbidity remains high, and DGE continues to be one of the most common postoperative complications after biliary surgery [16, 19, 20].

Considering all this, an objective reevaluation of choledochojejunostomy is meaningful. During our surgical experience, we developed a modification of the biliary-enteric anastomosis procedure using a route in which the jejunal loop passes behind the antrum pyloricum. In this report, we compared the outcomes of the new retropyloric biliary-enteric reconstruction procedure with that of the traditional antegastric Roux-en-Y choledochojejunostomy.

A prospectively maintained hepatobiliary surgery database was reviewed for all patients who underwent choledochojejunostomy in our department between January 2007 and December 2012. A total of 246 patients that received Roux-Y choledochojejunostomy were assigned to one of two groups: (1) Control group, CG (n = 187), where patients underwent retrocolic, antegastric reconstruction, and (2) Study group, SG (n = 59) where choledochojejunostomy was performed via the retropyloric (s.s. behind the antrum pyloricum) route. We compared retrospectively the clinical outcomes of the two groups, focusing on the manifestation of postoperative gastrointestinal disorders and the time elapsed before resuming liquid food consumption after surgery.

All studies were approved by the Committee on Ethics of the Second Military Medical University. Written consent was given by the patients for their information to be stored in the hospital database and used for research upon admission.

The occurrence of right upper abdominal pain, chills, fever, or jaundice within six months after discharge was defined as acute cholangitis attack. Chronic cholangitis was defined by the presence of these symptoms 6 or more months after surgery. Chronic cholangitis was caused either by bacterial invasion or by obstruction of the ducts by calculi or a tumor. The condition is characterized by severe right upper quadrant pain, jaundice (if an obstruction is present), and intermittent fever. Blood tests reveal an elevated level of serum bilirubin. Treatment consists of antibiotics for infection and surgery for acute obstruction. In patients with cholangitis, magnetic resonance cholangiopancreatography was used to assess whether the complication was caused by an anastomotic stricture or by reflux due to roux loop stasis. In our study, DGE was defined as any combination of the use of a nasogastric (NG) tube for 10 days or more, regular diet not tolerated by postoperative day 14, or the reinsertion of an NG tube, as suggested by Tani and coworkers [21]. 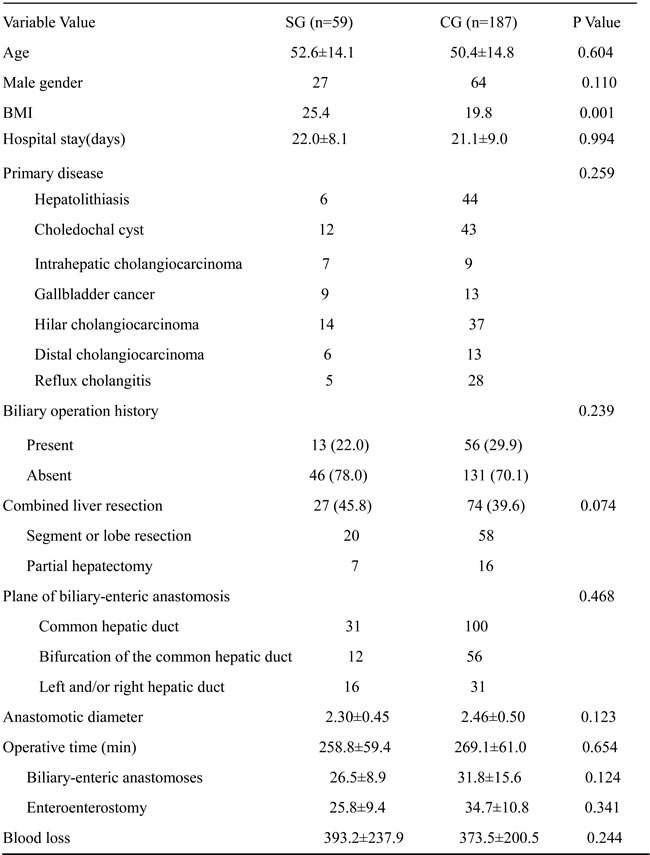 Modified, retropyloric choledochojejunostomy (study group; SG): After resection of the primary lesion, all 59 consecutive patients underwent biliary-enteric Roux-en-Y choledochojejunostomy using a retrogastric (s.s. retropyloric, i.e. passing behind the antrum pyloricum) route under general anesthesia (Figure 1). A T-tube was inserted within the biliary-enteric anastomosis whenever necessary, and left in place for 5 to 14 weeks. The distal jejunal stump was raised to the hepatic hilum behind both the transverse colon and the gastric antrum, then through the fascia between the stomach and pancreas, finally piercing through the superior mesenteric root. A 5-0 absorbable suture was used for interrupted suturing of the biliary-jejunal anastomosis. 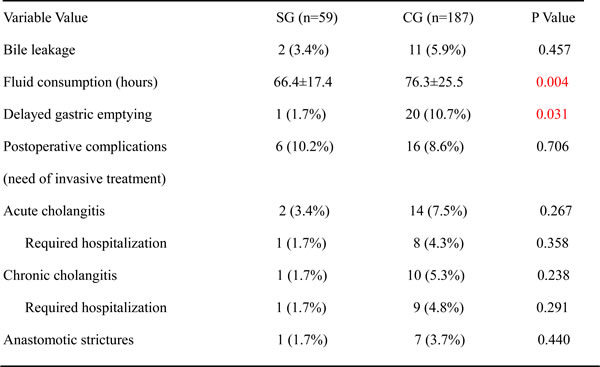 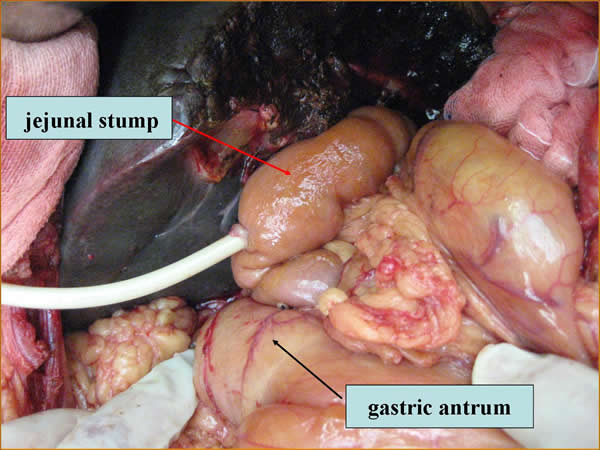 Conventional, antegastric choledochojejunostomy (control group, CG): The surgical procedure was the same as in the modified anastomosis approach (SG) except that the biliary-enteric anastomosis was reconstructed using an antegastric (i.e. passing in front of the pyloric antrum) route (Figure 2). 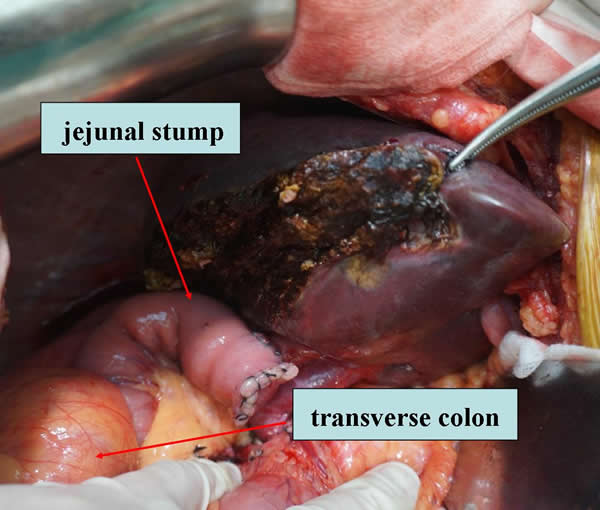 Since the Roux-en-Y reconstruction technique was first reported in 1893, biliary-enteric anastomosis routes have been greatly improved [9]. However, the jejunal stump or “bridge loop” placement has typically remained antegastric. Since 2007, we began to suspect the rationality of this approach. Thus, we tested a new retrogastric route, i.e. traversing behind the antrum pyloricum, to raise the jejunal stump during biliary-enteric anastomoses and compared the clinical outcomes with those of patients receiving conventional, antegastric Roux-en-Y choledochojejunostomies.

Reflux cholangitis has been reported as the most common complication of Roux-en-Y hepatojejunostomy [10]. Reflux cholangitis may result in anastomotic strictures, stone recurrence, and liver abscesses [11]. Long-term reflux cholangitis could also increase the risk of tumorigenesis [12]. A variety of anti-reflux procedures and devices have emerged to solve this complication. Among these, the anti-reflux effects of artificial nipples have been inconsistent because of chronic fibrosis and gradual impairment of the countercurrent flow [22]. For example, when a silicone anti-reflux valve was placed between the bile duct and intestine to prevent reflux of the intestinal contents, the clinical effect was not sustained. In addition, anti-reflux devices can potentially increase the difficulty of surgery and impose a financial burden on patients [22, 23, 24]. In conventional Roux-en-Y choledochojejunostomies the proximal jejunal loop is usually long and has an inverted C shape. Contents in the proximal jejunum easily enter the distal jejunum upon anastomosis and then retrogradely reach the bile duct, a risk factor associated with postoperative reflux cholangitis. Based on these anatomical features, we changed the C-shaped curve present in the conventional, antegastric route into a straight line in our retrogastric (retropyloric) approach, preserving a more natural state of the bridge loop and its mesentery. The aim of this modification was to effectively avoid the risk of reflux cholangitis while meeting the requirement of a tension-free anastomosis.

With the advent of innovative techniques, including operative techniques, intensive care medicine, interventional radiology, and novel pharmacological agents, the mortality rate after choledochojejunostomy has greatly decreased. Despite this improvement in mortality, postoperative morbidity remains high, and much of this is due to DGE, which remains one of the most common complications after upper gastrointestinal tract surgery. Although for most patients DGE is not life-threatening, it can cause discomfort, increase the duration of postoperative hospitalization, increase hospital costs, and decrease quality of life. The mechanisms of postoperative gastroparesis, gastric stasis, and DGE are still poorly understood [16, 25]. Operative factors such as the method of gastric drainage reconstruction (antecolic versus retrocolic) may impact the incidence of DGE [26, 27]. Several reports suggested that other postoperative complications increase the incidence of DGE [16, 25, 27], which is often, but not always, associated with pancreatic fistula, peripancreatic collections, or intraabdominal abscesses.

Currently, with fast-track surgery and reduced length of hospitalization becoming increasingly common for patients undergoing hepatobiliary surgery, the direct association between DGE and prolongation of hospital stay has substantive economic impact. International differences regarding the duration of the postoperative hospital stay must be acknowledged when considering this topic, which has been addressed in a previous study carried out in our hospital [28].

Many risk factors associated with DGE have been reported after choledochojejunostomy. In Roux-en-Y biliary-enteric anastomosis the jejunum is usually transected, and its motility and electrical activity are greatly impacted. This can cause reverse peristalsis [29], and as a result, the intestinal contents can become stagnant, thus favoring bacterial colonization and leading to postoperative cholangitis and abnormal liver function [30]. Due to the weight of the transverse colon and the gastric antrum, the pylorus and duodenum can be compressed in choledochojejunostomies performed using the antegastric route. This is not conducive to the transmission of the gastrointestinal peristaltic rush and is associated with a greater risk of gastrointestinal disorders, especially when the patient is in a supine position. Intestinal obstruction caused by compression of the gastric pylorus or duodenum can be prevented by re-routing the procedure using the retrogastric (s.s. behind the pyloric antrum) approach. This is instead conducive to a better postoperative recovery of gastrointestinal function. As our results show, the incidence of postoperative DGE was significantly decreased in our study group.

We propose that this new technique is particularly suitable for patients with obesity. Because a pachyntic pylorus is common in obese patients, creating a C-shaped jejunal curve located anteriorly to the pyloric antrum during biliary-enteric anastomosis is more difficult and more prone to reflux cholangitis. Obese patients are more likely to have relatively short mesenteries, especially patients with abnormal vascular arches, and the length of the ascending bowel loop is often shortened. Because the portal hilum is usually buried deep after hemihepatectomy, longer lengths of bowel and mesentery are required for biliary-enteric anastomosis using this conventional route. In this situation, the risk of bile leakage greatly increases because of increased tension. Re-routing the anastomosis behind the pyloric antrum can mitigate these risks, as evidenced in our previous report [31].

Our study presents some limitations, mainly regarding its retrospective design and the small number of patients studied. Further evaluation of larger numbers of patients, including prospective studies, are thus required to confirm our results.

In conclusion, a retrogastric approach during Roux-Y choledochojejunostomy decreases the incidence of DGE and reduces the time elapsed until consumption of the first postoperative liquid meal. Our data suggests that this modified anastomosis route is safe and efficacious, especially for obese people.

Yang XW, Yan WL, and Du J performed the majority of studies and provided the collection of all the clinicopathologic data; Yang XW and Chen JY wrote the manuscript. Yan XZ, Wen ZJ, and Yang PH provided analytical tools and were also involved in editing the manuscript; Zhang BH and Yang J designed the study.

We are grateful to Li Yu-long, Tan Wei-Feng, and Zhang Bai-He for their assistance in the preparation of this manuscript.