Association of IL-1A and IL-1B polymorphisms with ankylosing spondylitis among the Chinese Han population: a case–control study

Ankylosing spondylitis (AS) is a complex and chronic inflammatory disease with a high heritage. The overall prevalence of AS in Chinese is 0.2–0.54% [1]. The condition affects predominantly the axial skeleton, including the spine and sacroiliac joints, and causes pain, stiffness, and, eventually, bony ankylosis. Joints and tendon insertions (entheses) elsewhere are also commonly involved, and approximately one-third of patients develop acute anterior uveitis.

Although AS is also a complex multifactorial disease resulting from gene and environment interaction, the exact mechanism of AS is still unclear. As we all know, Genetic factors have an importance role in AS susceptibility and expression [2]. HLA–B27 is the major gene associated with the susceptibility of AS, which is present in > 95% of Caucasians of northern European ancestry, yet only 1%–5% of HLA-B27 carriers develop AS, so that HLA-B27 carriage alone does not explain the pattern of disease recurrence in families [3]. Therefore, we provide a hypothesis that HLA-B27 is almost essential but not adequate to cause AS and that other genes interact with HLA-B27 to cause the condition. Recent genome-wide screening identified non-MHC regions with linkage with AS [4, 5]. The interleukin-1 (IL-1) cluster on chromosome 2q has emerged as a robust non-MHC susceptibility locus for AS in several groups study [5–7]. Those studies, however, always have conflicting results in different populations, making it difficult to put forward a conclusion about the relationship between IL-1 gene cluster and AS. Due to the IL-1 gene cluster also play a prominent role in inflammation and host defense against infection. The prototypic members of the IL-1 family gene cluster are the genes IL-1A, IL-1B, and IL-1RN [5], which were related to AS, but IL-1A and IL-1B were less reported [4, 5, 8, 9]. IL-1A and -B encode proinflammatory cytokines involved in host defense against infection [5]. The genes polymorphisms have been related to a number of chronic inflammatory diseases such as Crohn’s disease and inflammatory bowel disease (IBD) [10, 11]. Rs16944 in IL-1B was identified associated with AS in European ancestry [5], but was not replicated in another study in a Han Chinese population, and few information is found about other SNPs on IL-1A and L-1B associated with AS risk. Besides, recent report has showed that association particularly with haplotypes of single nucleotide polymorphisms (SNPs) in the IL1RN gene [4], suggesting that the true associated polymorphism lay on the associated haplotype but was not one of the individual markers genotype.

A total of 276 cases and 296 controls were enrolled in our study. The demographic characteristics of the study population are showed in Table 1, which showed the significant difference in age and gender distribution between the case and control groups (p < 0.001).

Table 1: Number of individuals for ankylosing spondylitis case and controls

Table 2 summarized the minor allelic frequency (MAF) of tested SNPs among the individuals in the case and control groups. After Hardy–Weinberg equilibrium (HWE) p value screening, we excluded one SNP (rs2853550). The allelic frequency of SNPs in the controls group was similar to those of the HapMap Asian population. Through the χ2 test, we found that no SNP was significantly associated with AS risk.

Table 3: Logistic regression analysis of the association between the SNPs and ankylosing spondylitis disease (adjusted sex and age) 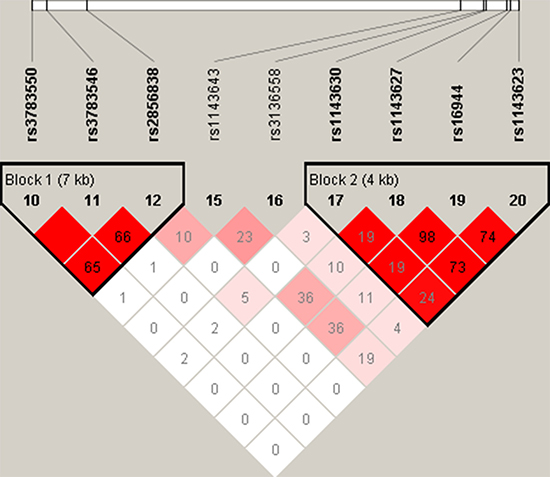 Figure 1: LD analysis of the association between all the SNPs of the IL-1A and IL-1B gene and ankylosing spondylitis.

Table 4: IL-1A and IL-1B haplotype frequencies and the association with the risk of ankylosing spondylitis in case and control patients (adjusted sex and age)

The haplotype “TCG” of IL-1A were significance associated with a decreased risk of AS, which can act as a protect factor for AS. Although the individual polymorphism investigated showed no association with AS adjusted by age and sex, it is contribute to our hypothesis that substantially stronger haplotype associations with SNPs of IL-1A than with individual SNPs.

IL-1A and IL-1B are one of the family of IL-1 and are proinflammatory cytokine that are mainly produced by activated macrophages, whose actions include augmentation of activation of T and B lymphocytes and monocyte/macrophages, and induce fibroblast proliferation leading to synovial pannus formation [12], which also produce IL-1α and IL-1β, respectively [13, 14]. The genes for the proinflammatory cytokines IL-1α and IL-1β are located on the long arm of human chromosome 2, in close linkage with another gene of the IL-1 gene family, the gene encoding their endogenous antagonist IL-lRa [15]. Randomized clinical trials in rheumatoid arthritis with recombinant human IL-1ra demonstrated modest anti-inflammatory effects and significant slowing in the rate of joint damage [16]. This may suggest that in certain patients the lack of production of IL-1ra, the natural antagonist of IL-1β, contributes to the chronicity of the inflammation. Furthermore, IL1A and IL-1B may induce inflammation in AS through intracellular effects [17], it is also possible that IL1A and IL-1B are involved in the initiation of disease, but has a less significant role in established disease.

Despite this study showed three SNPs (rs3783550, rs3783546 andrs2853550) associated with AS susceptibility in the different model, some limitations should be considered. First, as the incidence of ankylosing spondylitis is low, so that the sample size of our study was relatively small. There may be some false positive results, but it has been able to explain the trend of IL-1A and IL-1B in patients with ankylosing spondylitis. In the future we will recruit more samples included in our future studies to verify our results. Second, the heterogeneity in living conditions was not evaluated in this study, which has contributed to the progress in elucidating the pathogenesis of AS.

In conclusion, our study has described the association between rs3783550 (IL-1A), rs3783546 (IL-1A) and rs2853550 (IL-1B) and AS risk and between a new haplotype, “TCG”, of rs3783550, rs3783546 and rs2853550 and AS in Chinese Han population. Therefore, the results provide additional evidence for the relationships between genetic variants and AS susceptibility in the Hainan population. Moreover, a large number of genetic risk factors for AS should be investigated and validated to fully understand the pathogenesis of AS. Further studies will focus on the functional experiments based on the relevant genes on animal models, to investigate detailed mechanism involved.

We recruited a total of 267 patients diagnosed with AS and 297 controls from 2014 to 2016 among Han Chinese. All the subjects were treated by the Second Affiliated Hospital of Inner Mongolia Medical University. All participants signed informed written consent. All cases were verified, and patients were recruited without age, or disease stage restriction and who were previously healthy. AS was defined by the modified New York diagnostic criteria [20]. In all cases the diagnosis of AS was confirmed by a qualified rheumatologist and was followed by either examination or telephone interview. In cases with an atypical history or no previous radiographic evidence, pelvic and lumbosacral spine radiographs were obtained and attending general practitioners were contacted to confirm diagnosis. All cases were HLA-B27 positive. To reduce the potential environmental and therapeutic factors impacting the variation of complex human diseases, we performed detailed recruitment and set exclusion criteria to exclude subjects with chronic disease and conditions involving vitalorgans (brain, liver, heart, and lung). Controls were selected unrelated and randomly. Among control individuals, none had any chronic diseases. The use of samples was approved by the Human Research Committee of the Second Affiliated Hospital of Inner Mongolia Medical University for Approval of Research Involving Human Subjects. The personal characteristics of the participants are listed in Table 1.

Among the 12 SNPs we selected, rs16944 in IL-1B [5] was chosen from previously published polymorphisms associated with AS, others were randomly chosen from the published genes (IL-1A and IL-1B) associated with AS. Minor allele frequencies of all SNPs were > 5%, in the HapMap of the Chinese Han CHB population. We adopted Gold Mag-Mini Whole Blood Genomic DNA Purification Kit (GoldMagCo. Ltd. Xi’an City, China) to extract DNA that was from whole blood. Quantification of the extracted DNA was performed using NanoDrop2000. Genotyping was done with the Sequenom MassARRAY RS1000 system using the standard protocol recommended by the manufacturer. The multiplexed SNP Mass EXTENDED assay was designed using Sequenom Mass-ARRAY Assay Design 3.0 Software [21]. Data management and analysis was done using SequenomTyper 4.0 Software. We use the Sequenom MassARRAY RS1000 system to analysis genotype, which was conform to the standard protocol recommended by the manufacturer.

We used Microsoft Excel and SPSS 18.0 (SPSS, Chicago, IL, USA) to perform statistical analyses. In this study, all p values were two-sided, and p ≤ 0.05 was regarded as getting statistical significance. Control genotype frequencies for each SNP were tested for departure from Hardy-Weinberg equilibrium (HWE) using Fisher’s exact test. The χ2 test was used to compare the distribution of marker alleles and genotypes in cases and controls [22]. Unconditional logistic regression analysis adjustment with age was used to test odds ratios (ORs) and 95% confidence intervals (CIs) [23]. Associations between SNPs and risks of ASwere tested in genetic models by analysis with SNP Stats software, obtained from http://bioinfo.iconcologia.net. Values of OR and 95% CI were calculated as above.Akaike’s InformationCriterion (AIC) and Bayesian InformationCriterion (BIC) were applied to choose the best-fit model for each SNP. Finally, we used the SHEsis software (http://analysis.bio-x.cn/myAnalysis.php) to estimate the pairwise linkage disequilibrium (LD) and haplotype construction [24].

All Authors declare that they have no conflicts of interest.