Ceruloplasmin as a prognostic marker in patients with bile duct cancer

Background and Aims: Bile duct cancer is one of the lethal cancers, presenting difficulties in early diagnosis and limited treatment modalities. Despite current advances in biomarker research, most studies have been performed in Western populations. Therefore, the purpose of this study was to determine a prognostic marker for bile duct cancer, especially in Korean patients, whose incidence of bile duct cancer is high.

Patients and Methods: We performed tissue microarray experiment with 79 bile duct cancer tissue samples and 21 normal bile duct tissue samples. Candidate genes that has positive correlation with T, N stage and perineural invasion were drawn with multivariate analysis. Tissue expression of the genes was evaluated with an immunohistochemical study.

Conclusions: Ceruloplasmin is supposed to be related with advanced T stage and perineural invasion, having a possibility as a candidate prognostic marker for bile duct cancer.

Biliary tract cancer is the 10th most common cancer in the United States, and its mortality ranks 5th among all cancers [1]. The incidence of biliary tract cancer is higher in Eastern than Western populations, and it is the 9th most common cancer in Korea [2]. The actual 5-year survival rate for bile duct cancer after curative resection ranges from 28 to 30.1% [3, 4]. Radical resection of the tumor with a gross and microscopic negative resection margin is essential for long-term survival. However, surgical candidates are few because of difficulties in early diagnosis caused by asymptomatic manifestation, a lack of sensitive biomarkers, and the cancer’s aggressiveness. In addition, treatment modalities for bile duct cancer are limited, because the cancer is refractory to chemotherapy and radiation treatment. Therefore, discovery of diagnostic, therapeutic, and prognostic biomarkers for biliary tract cancer is important.

Recently, there have been marked advances in biomarkers for biliary tract cancers [5]. Diagnostic markers as p38 [6], MMP [7], and miR-21 [8], therapeutic markers such as Erb-1/EGFR [9], VEGF [10], ERKs [11], PI3K [12], mTOR [13], and SMAD4 [14], and prognostic markers such as Erb-B3/Her3 [15], PTEN [16], CA19-9 [17], SMAD4 [18], IDH [19], miR-26a [20], and miR-192 [21] have all been suggested. However, the number of study subjects was relatively small, and some studies used in vivo experiments. Moreover, most of those studies were performed with a Western population. Therefore the purpose of this study was to determine prognostic markers for bile duct cancer, especially in Korean patients. To our knowledge, this study is the first conducted in Eastern bile duct cancer patients with a large number of study subjects.

Clinicopathological characteristics of the study subjects

To find genes positively associated with increased T, N stage and positive perineural invasion, we performed multivariate analysis. Because we found no significant DEG for lymph node metastasis when applying adjusted p-value criteria, we included 157 genes with unadjusted p-value <0.05 in both T, N stage and perineural invasion in this analysis. The top 50 genes are listed in Table 2. Among the 477 genes we included in this analysis, we identified 199 significant DEGs, of which 29 had a positive coefficient with cancer tissue, advanced T, N stage, and perineural invasion (Figure 1). 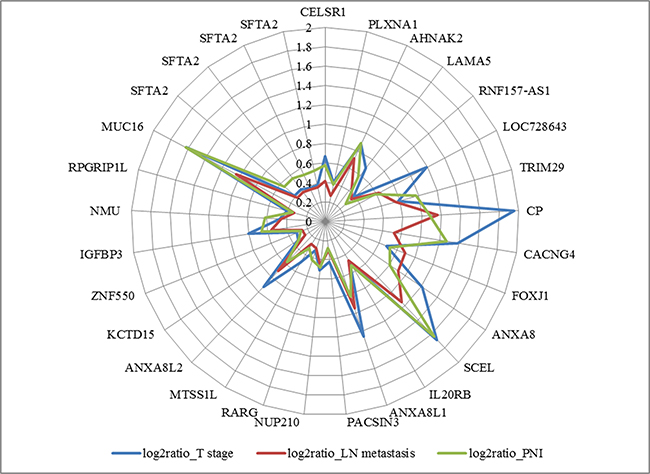 A search of the PANTHER database showed that 23 of those genes were associated with molecular functions, biological processes, cellular components, protein classes, and pathways. Ten of those genes (43.5%) had a binding molecular function and 6 (26.1%) had receptor activity. According to biological process, 10 genes (43.5%) were involved in cellular processes, 9 (39.1%) in metabolic processes, and 7 (30.4%) in biological regulation. Among them, we identified top 3 candidate genes with a log2 ratio >1 for advanced T, N stage and perineural invasion (Table 3). 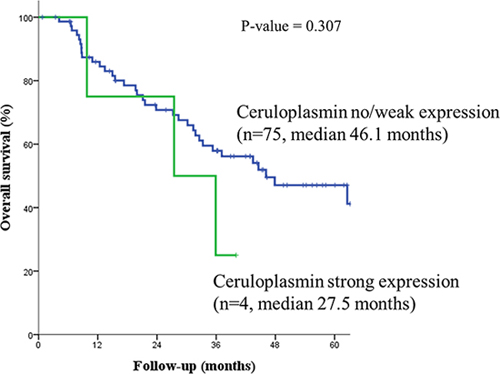 Figure 3: Patients with strong ceruloplasmin expression had shorter median overall survival than those with no or weak overexpression.

There are several limitations in this study. First, we did not measure the serum level of ceruloplasmin, because our study was retrospective. Second, we did not study the contribution of copper metabolism to cancer development and its progression, which needs to be evaluated in future prospective studies. In addition, the expression rate of ceruloplasmin in biliary epithelium had not previously been documented. In this study, the overall expression rate was 25.4% and only 5.1% showed strong expression, which left a relatively small number of patients for analysis. Furthermore, there was limited number of patient with ceruloplasmin strong expression without jaundice, therefore further analysis concerning the potential prognostic value of ceruloplasmin in relation with biliary obstruction was not conducted. Although we found a tendency for increased ceruloplasmin expression in advanced T stage cancer with perineural invasion, that finding did not achieve statistical significance. For the last, having no significant DEG for lymph node metastasis after age and sex adjustment, we included 157 genes with unadjusted p-value <0.05 in both T, N stage and perineural invasion. It would be more valuable to include DEGs with adjusted p-value <0.05, however, the shortage of sample inevitably lead to statistical limitation. A larger number of patients will be needed to validate our result in this study.

Quality assessment of RNA for our experiment was performed using fresh frozen tumor tissue samples from 176 consecutive patients with intra- and extra-hepatic bile duct adenocarcinomas, along with normal bile duct tissue from 48 patients with ampulla of Vater adenocarcinoma, all of whom underwent surgical treatment at Seoul National University Hospital between year 2003 ~ 2011. After quality control, 79 samples of intra- and extra-hepatic bile duct adenocarcinoma and 21 samples of normal bile duct tissue were included in our experiments.

RNA was extracted from tumor and normal bile duct tissue using RNeasy® kits (QIAGEN Sciences, Germantown, PA, USA), according to the manufacturer’s instructions. RNA concentrations were determined spectrophotometrically, and RNA purity and integrity were evaluated by calculating the 260/280, and 260/239 ratios and by electrophoresis on 1% agarose gels [47].

The log 2 ratios of the samples were compared using permutation t-tests at simulation numbers of 100,000, adjusted for age and sex. An adjusted p value with false discovery rate correction less than 0.05 was considered significant. To find the DEGs with a linear association with increasing T, N stage and perineural invasion, DEGs that had positive coefficient were selected for further analysis. To evaluate the clinical effect of ceruloplasmin expression, we compared clinicopathological characteristics with the χ2-test. A p value of less than 0.05 was considered significant. The Kaplan-Meier method was used to calculate survival rates for candidate genes, compared using the log-rank test. All statistical analyses were performed in the R environment (The R Foundation for Statistical Computing, Vienna, Austria) and IBM SPSS Statistics version 21.0 (IBM Corp., Somers, NY, USA), with a p value less than 0.05 considered significant.

We drew the candidate gene list by filtering for those with a positive log2 ratio in cancer tissue compared with normal bile duct tissue, using covariates of T, N stage and perineural invasion, adjusted for age and sex. Genes considered significant were assessed by gene functional classification, gene function and pathway annotation, and data mining to explore the association of each gene with disease. Gene function was annotated using the PANTHER database (http://www.pantherdb.org). Data mining to explore the relationship of each gene with disease was performed using the i-hop (http://www.ihop-net.org), OMIM (http://www.ncbi.nlm.nih.gov/omim), and oncomine (https://www.oncomine.org/) databases.

Paraffin-embedded tissue samples were stained immunohistochemically with antibodies to ceruloplasmin (ab48614, Abcam, Cambridge, MA, USA, 1:200) according to the manufacturer’s instructions. Immunohistochemical staining results were reviewed by a pathologist specializing in biliary-pancreatic disease with more than 10 years of experience. The intensity of staining was evaluated as a score of 0, 1, or 2+ for no staining, weak staining, and strong staining, respectively.

This study was supported by grant no.3420130180 from the SK Telecom Research Fund and by a grant of the Korea Health Technology R&D Project through the Korea Health Industry Development Institute (KHIDI), funded by the Ministry of Health & Welfare, Republic of Korea (grant number : HI16C2037).

The authors have nothing to declare.