Microvesicles (MVs) are carriers of molecular and oncogenic signatures present in subsets of tumor cells and tumor-associated stroma, and a focus of cancer research. Although methods to detect MVs are mature, we were concerned that the buffer used could lead to false results when quantitating MVs by flow cytometry. In this work,we detected MVs by flow cytometry withthree different solutions: water, saline, and phosphate-buffered saline (PBS). The results demonstrated that PBS, when reacted with annexin V binding buffer, produced nano-sized vesicles even when there were no MVs in the sample. No similar events occurred in the saline and water groups (P < 0.01). Annexin V positive rate increased significantly when PBS was used as the buffer, compared to saline and water. These false negative results were also observed when we quantified some markers of MVs such as CD3 and CD19. A probable explanation for these findings is the production of insoluble Ca(H2PO4)2 or Ca3PO4 from calcium in the binding buffer and phosphate in PBS. Thus, considering the osmotic pressure of water, we suggest that saline is a more suitable buffer when counting MVs by flow cytometry.

Cellular microvesicles (MVs), 0.1–1 μm in size, are released by various cell types, especially cancer cells that are undergoing stress and activation [1-3]. During recent decades, extensive research revealed that MVs carry their parental cell proteins, lipids, and nucleic acids, which may be transferred between cells [4-6]. MV-mediated cargo transfer to adjacent or remote cells affects tumor progression and provides a potential source of disease-related biomarkers [7]. Multiple studies have demonstrated that tumor cells may locate to undetectable sites but their MVs circulate in the blood, transporting information about the cancer [1-3]. Although the understanding of MV biology remains a major challenge, their characteristics create new opportunities for advances in cancer diagnostics and therapeutics. Such information suggests the possibility of using MVs in biological fluids as markers of cancer pathology, as more feasible “liquid-biopsy” material to gain diagnostic information, and to follow disease progression and the response to clinical treatment through a simple blood test or cerebrospinal fluid collection [1, 3, 7-9].

Uniform methods to isolate and identify MVs are not yet defined. Electron microscopy, atomic force microscopy, nanoparticle tracking analysis, and flow cytometry have been reported in many studies [10]. Among all, flow cytometry is effective for high-throughput quantification and multiparameter characterization of MVs [11-14]. Most researchers have confirmed the presence of MVs by assessing annexin V-positive vesicles using phosphate-buffered saline (PBS). However, we believe that using the annexin V binding buffer with PBS could generate numerous nano-sized vesicles that would seriously affect quantification of these structures. The aim of the current study was to investigate whether mixing the annexin V binding buffer with PBS modified the flow cytometry results.

Detection of MVs by electron and fluorescence microscopy

K562 cells were observed by scanning electron microscopy (SEM) and transmission electron microscopy (TEM) (Figure 1A, 1B). Extracellular vesicles were visible on the surface of K562 cells through SEM (Figure 1A). The MV pellet was observed by TEM and they exhibited circular structures of different sizes with a bilayer (Figure 1C, 1D). Most vesicles were less than 1 μm in diameter. PKH67-labeled MVs were observed directly by fluorescence microscopy (Figure 1E). PKH26-labeled MVs were devoured by human umbilical vein endothelial cells (HUVECs) after 12 h (Figure 1F). 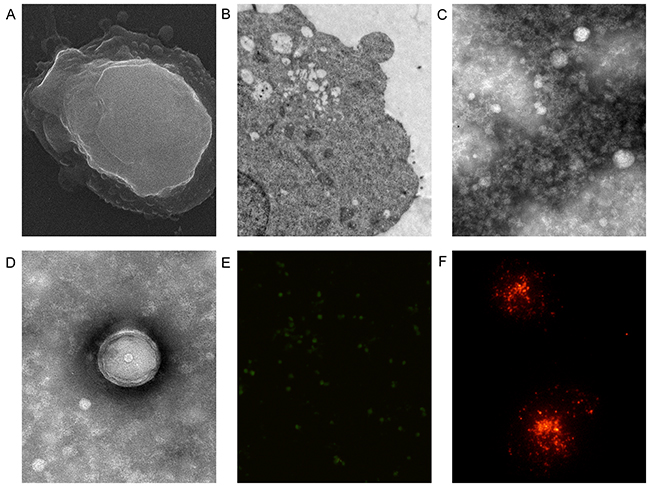 Initially, we discriminated sizes by flow cytometry using fluorescent microbeads of 0.22, 0.45, 0.88, and 1.34-μm diameters. The size position of the MV gate was assessed in forward versus side scatter dot plots (Figure 2A, 2B). Flow cytometric analysis demonstrated that the majority of MVs were smaller than the 1.34-μm beads. All gating events were also analyzed for phosphatidylserine (PS) by studying annexin V binding to distinguish true events (annexin V positive) from background noise. To detect nano-sized vesicles generated by mixing the annexin V binding buffer with PBS using flow cytometry, we used blank control groups containing water, saline, and PBS. To exclude pre-existing nano-sized vesicles from the blank and annexin V binding buffer solutions, we initially double-filtered the solutions through a 0.22-μm filter and then determined MV-sized vesicle counts by flow cytometry. MVs from K562 cells were analyzed at the same time as a positive control. The number of events recorded during 30 s by flow cytometry were as follows: 30,120 ± 3041 for MVs isolated from K562 cells, 225 ± 101 for water, 340 ± 197 for PBS, 363 ± 181 for annexin V binding buffer, and 308 ± 151 for saline (P < 0.0001 for K562 cells vs. all other groups) (Figure 2C–2H). 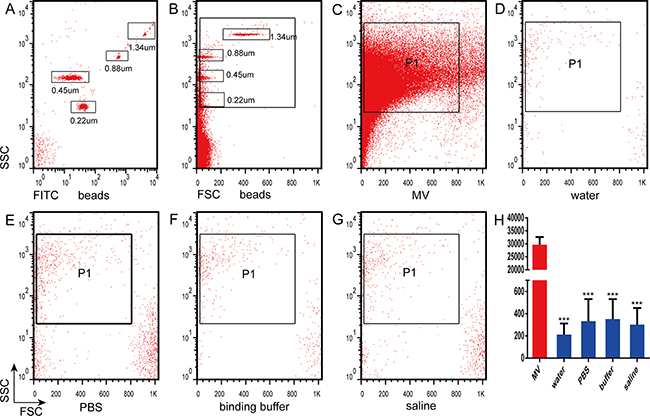 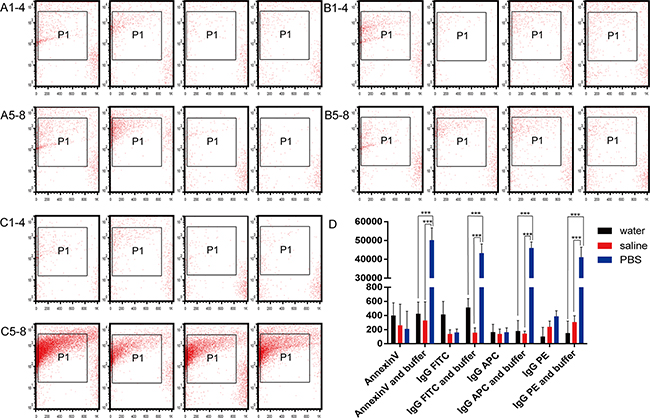 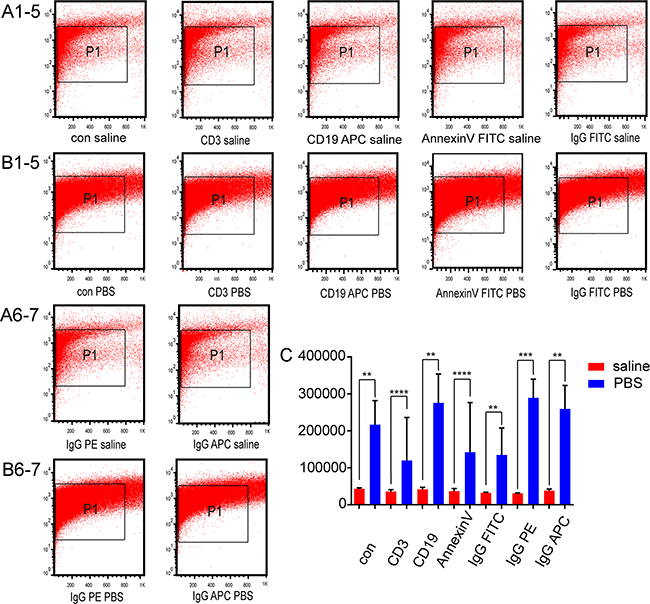 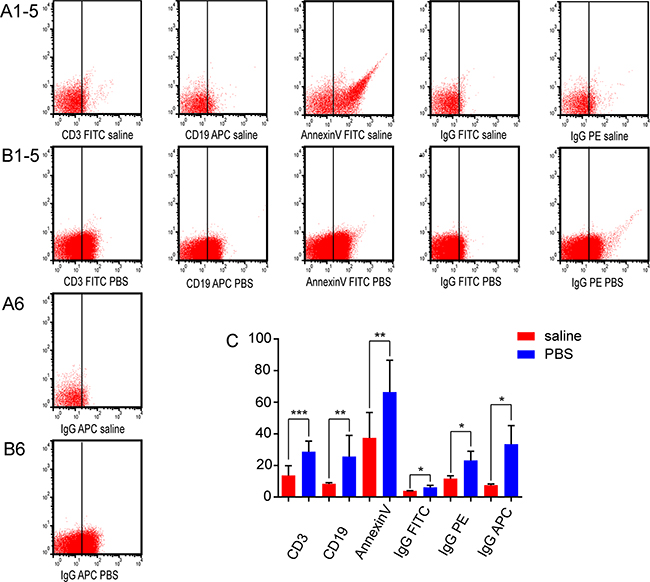 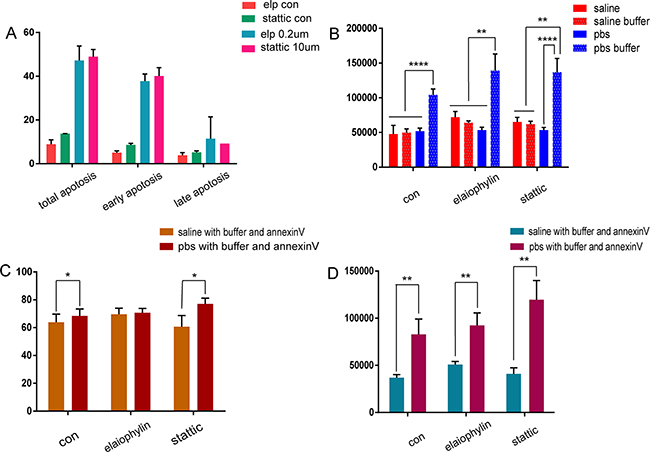 Saline and PBS were used with the control, elaiophylin, and stattic groups. Equal numbers of MVs from the same group were dissolved in saline or PBS, with and without binding buffer. The counts of nano-sized vesicles in tubes containing PBS with binding buffer were significantly greater than the corresponding saline group (n = 5, P < 0.01) (Figure 7B) (Supplementary Table 2).

Intercellular communication is essential for cancer cells to survive and thrive. Extracellular vesicles such as exosomes, MVs, and large oncosomes are involved in this communication process by shuttling reciprocal signals and other molecules between cancer and stromal cells, including fibroblast, endothelial, and immune cells [15-17]. Extracellular vesicles could act as a platform for liquid biopsy in tumors, such as glioblastoma [3, 7, 18, 19]]. In addition, increased numbers of MVs and the expression of specific MV markers such as CD19 in chronic lymphocytic leukemia are associated with disease progression and malignancy [20]. Many studies have shown that increased circulating MVs indicate poor prognosis and disease progression in some cancers [20]. Thus, precise enumeration of MVs is very important in this area.

MVs are defined as particles between 100 and 1000 nm in diameter that typically exhibit PS on the outer leaflet of their plasma membranes. Most studies have shown that MVs are typed and identified by fluorescence-activated cell sorting. Because exposure of PS is a typical marker for MVs, the standard procedure is to stain PS exposed on the external surface with annexin V [21-23]. Apoptotic bodies are also derived from the membrane of parental cells, with PS exposed on the surface. As a result, the methods of detection are similar for MVs and apoptotic bodies. Annexin V binding to PS is calcium-dependent [24], which leads to a lack of sensitivity and specificity when used to define MV populations [23, 25]. When using annexin V to define MVs, calcium-phosphate microprecipitates are observed in the MV gate and they increase the non-specific binding of annexin V, potentially leading to false-positive detection of MVs. Reporting increased MV-like microprecipitates might provide clinicians with erroneous information and misdiagnosis of diseases. Larson et al. designed an experiment showing that PBS generated an increasing amount of calcium-phosphate microprecipitates with increasing concentrations of CaCl2. Similar to our findings, they also found that the median fluorescence signal intensity increased with increasing CaCl2 concentrations when adding fluorescently labeled antibodies to the microprecipitates [22].

In our study, we confirmed that annexin V binding buffer contained Ca2+ and, when added to PBS, generated microprecipitates that led to false positive results. Thus, PBS was not suitable for MV counting. Resuspending the MV pellet in 100 μL of saline could avoid artifacts from the calcium-phosphate microprecipitates, and false-positive results. Saline appears to be a better choice to improve the sensitivity of MV-based lipid biopsy and provides important information about optimal molecular monitoring schedules in cancer diagnosis and evaluating the efficacy of different treatments. Exosomes, with a diameter of 100 nm, could not be detected by flow cytometry because the lower limit of detection was 300 nm. Thus, we consider that PBS will not affect exosome counts.

Cell culture and isolation of MVs

Labeling of MVs with PKH26 and PKH67

All analyses were performed on an LSR II flow cytometer (BD Biosciences) with DIVA (BD Biosciences) and FlowJo software [17]. The MV gate was established based on forward and side scatters [27] using fluorescent microbeads of 0.22, 0.45, 0.88, and 1.34 μm diameters, and defining MVs as events less than 1.34 μm. The lower detection limit as a threshold above the electronic noise of the flow cytometer was 0.3 μm [14]. To reduce background event numbers that affected the experimental results, the PBS, saline (0.9% w/v NaCl), and annexin V binding buffers were double filtered through a 0.22-μm filter (EMD Millipore, Billerica, MA, USA) and stored at 4°C. Two groups of MVs were isolated from 40 mL of culture medium containing 1 × 106/mL of K562 cells, and diluted in 1 mL of double filtered saline or PBS. MVs were suspended by agitating for 5 s in a whirlpool oscillator, and a 100-μL sample was aspirated into different flow tubes.

All statistical analyses were carried out using GraphPad Prism version 6.0 (GraphPad, La Jolla, CA, USA) and SPSS for Windows, version 17.0 (IBM, Chicago, IL, USA). Non-parametric and unpaired t-test comparisons were used to compare groups; the rates between groups were compared by the chi-square test. Two-sided P < 0.05 was defined as being statistically significant.

We thank Dr. Zhang Qian from the Blood Laboratory, Tongji Hospital, Tongji Medical College, Huazhong University of Science and Technology, for assistance in the acquisition of flow cytometry data.

The work was supported by a grant from the National Natural Science Foundation of China (No.81500136).