Conclusion: Progesterone receptor expression can be used as a favorable prognostic predictor in ovarian cancer managements.

Ovarian cancer is the leading cause of death from gynecological malignancy and the fifth cause of death among women worldwide [1]. In 2015, there were approximately 22,280 new cases and 14,240 deaths from ovarian cancer in the United States along [1]. This disease is often late-detected and progresses rapidly, thus has a poor prognosis [2, 3]. Over 70% of the patients are diagnosed at an advanced stage of disease, with a 5-year survival rate of merely 30% [4]. Despite modern management, such as cytoreductive surgery, and subsequent adjuvant chemotherapy, not all patients gain a benefit from these therapies [5, 6]. Moreover, the outcome has revealed that about 60-70% of patients will have recurrent disease within 18 months [7]. Therefore, discovery of applicable prognostic biomarkers for ovarian cancer is urgently required to improve the clinical outcomes of this disease.

In this study, we performed a meta-analysis of published studies to assess the prognostic value of progesterone receptor in patients with ovarian cancer. The clinical implications of the findings are also discussed.

The primary search yielded a total of 525 citations, among which 469 were excluded after screening of titles, keywords and abstracts. 28 articles were excluded after reviewing the full texts based on the selection criteria (11 studies had no relevant outcomes, 9 studies had no sufficient data, 4 studies were not written in English, 3 articles were conference articles or comments, and one study was duplicated report). Finally, 28 eligible studies involving 5685 patients were enrolled in the meta-analysis (Figure 1). 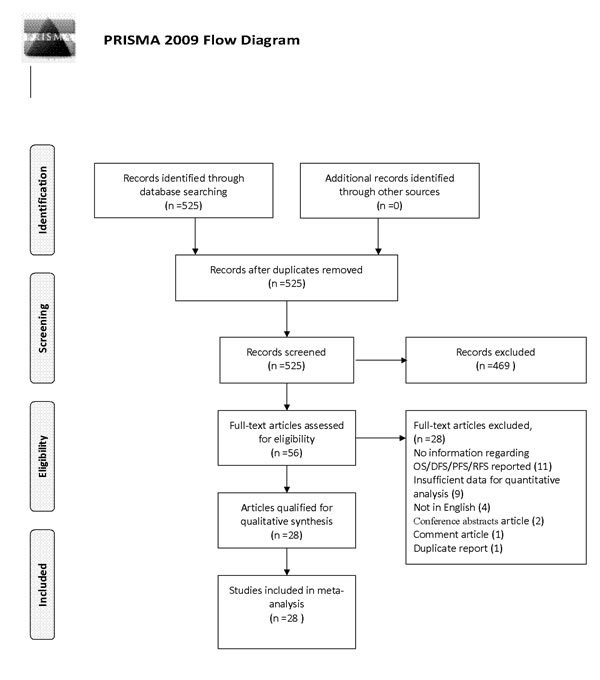 As for the region, 17 studies were performed in Europe, 6 studies in America, 2 studies in Asia, 2 studies in South America and one study was conducted in mixed populations. The sample-sizes ranged from 40 to 1661, with a median value of 116. A total of 26 studies described the correlation between overall survival (OS) and progesterone receptor expression, while 15 trials involved disease-free survival (DFS)/progress-free survival (PFS)/recurrence-free survival (RFS). Twenty-five studies used immunohistochemical staining for progesterone receptor assessment, one study used ELISA, and the 2 studies used the dextran-coated charcoal method. The quality of included studies was assessed by the Newcastle-Ottawa Scale (NOS), ranging from six to eight scores. Characteristics of detailed features were summarized in Table 1.

Association of progesterone receptor expression with OS of ovarian cancer

The results of progesterone receptor expression with OS were listed in Figure 2. The combined analysis of 26 studies showed that the expression of progesterone receptor was associated with a favorable OS of ovarian cancer (HR = 0.86, 95% CI = 0.78 to 0.95, P = 0.002). Significant heterogeneity was shown among these studies (I2 = 70.1%). Thus a random-effects model was used for statistical analysis, and subgroup meta-analysis was performed to investigate the possible source of the heterogeneity among these studies (Figure 3). 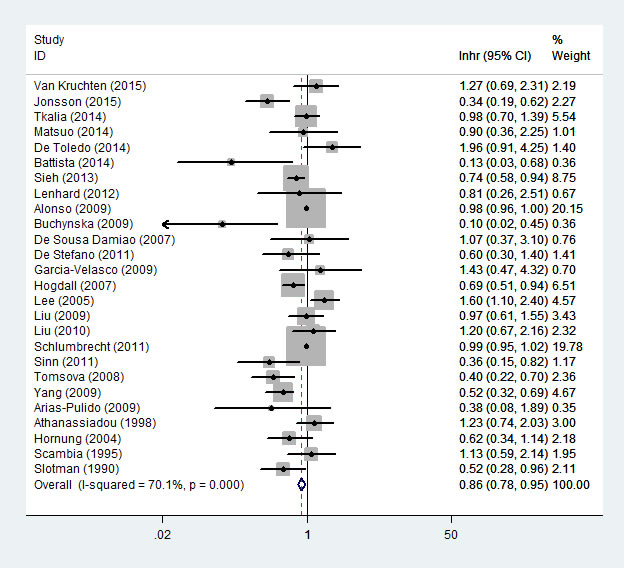 Figure 2: Forest plot of HR and 95% CI of the association between progesterone receptor expression and overall survival of ovarian cancer. Summary of all 26 trails, the results showed progesterone receptor was associated with a favorable OS of ovarian cancer using random effects model. The % weight was computed automatically by the Stata software. 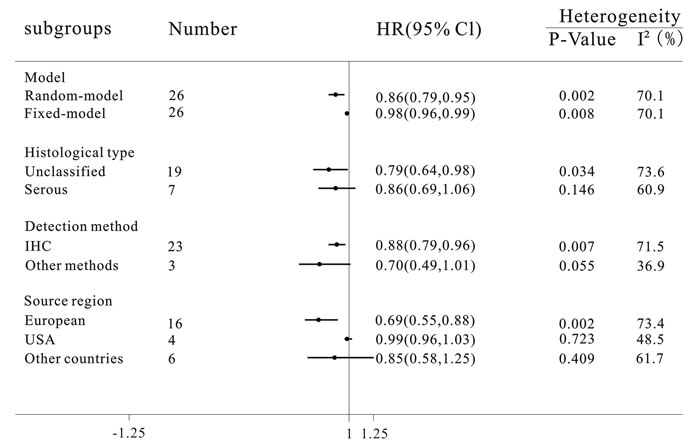 Figure 3: Subgroup analyses of the relationship between progesterone receptor expression and overall survival of ovarian cancer.

We analyzed the relationship between the expression of progesterone receptor and DFS/PFS/RFS among ovarian cancer patients. As shown in Figure 4, pooling analysis suggested that expression levels of progesterone receptor predicted an improved DFS/PFS/RFS, both in random (HR = 0.75, 95% CI = 0.61 to 0.93, P = 0.008) and fixed model (HR = 0.98, 95% CI = 0.97 to 0.99, P = 0.023), along with a moderate heterogeneity of the data (I2 = 70.2%). Random model was used to calculate the final outcome (Figure 4). Moreover, subgroup meta-analysis was used to stratify the data from selected articles to explore the possible source of the heterogeneity (Figure 5). 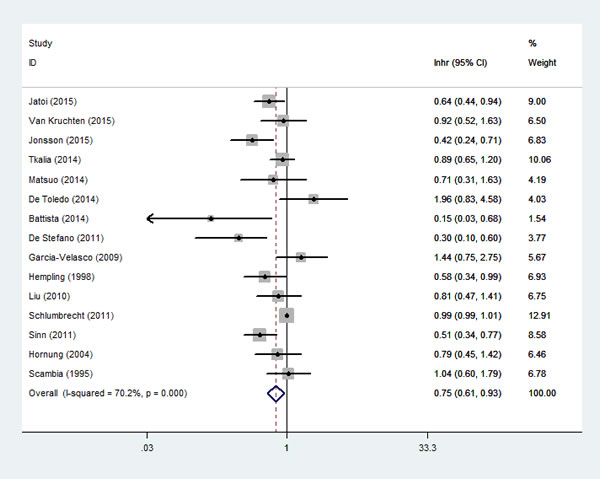 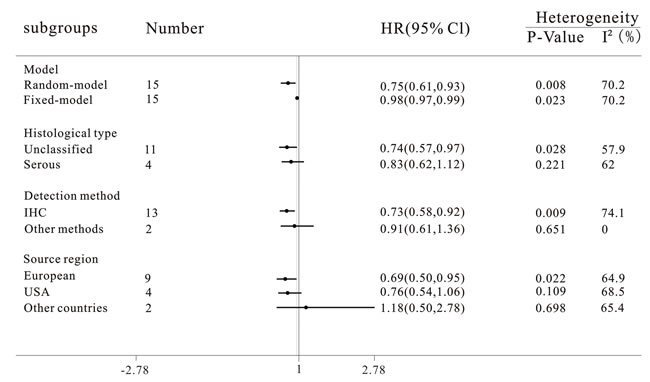 In sensitivity analysis, the leave-one-out method was chosen to confirm the stability of the results. Eligible studies were sequentially excluded one by one to evaluate the stability of the obtained conclusions from remaining data. After leaving out any single study, statistical significance of the OS or DFS/PFS/RFS was not altered (Figure 6A, 6B).

Subgroup analyses indicated the presence of remarkable influence of progesterone receptor on OS and DFS/PFS/RFS of ovarian cancer when using immunohistochemical technology, while this positive prognostic value was not observed with the use of other detection methods. Immunohistochemical technology has been widely used to identify the location and expression of proteins in patients’ tissues. It is possible that the information of progesterone receptor localization in cancers provided by this technique afford a specific diagnostic power over other techniques. Given only three studies used other methods, an alternative possibility could be that the differences were caused by the small sample size. Further studies are needed to clarify the prognostic value of progesterone receptor detected by other methods.

With respect to source regions, the expression of progesterone receptor was tightly related to a better prognosis in European population, while progesterone receptor expression had no effect on the prognosis in American group and other country group. It has been noted that several genes exert different effects on cancer risk and prognosis across ethnic groups. For example, patients with high expression of C-X-C chemokine receptor 4 (CXCR4) have a poor prognosis among Asian women with ovarian cancer. However, this relationship was not observed among ovarian cancer patients from non-Asian regions [43]. A probable explanation for such divergence is that genetic background, life style and environmental effect varied among different ethnic groups/regions. These differences may modify the specific correlation between progesterone expression and ovarian cancer outcomes.

There are several important implications in this meta-analysis. First, the study shows that the expression of progesterone receptor is related to a favorable outcome of ovarian cancer, suggesting progesterone receptor may be a potential prognostic marker for ovarian cancers. Second, the study conducted subgroup analyses based on histological type, detection method and source region to systematically evaluate the prognostic effect on ovarian cancer patients. Finally, the statistical results of the analyses appear to be reliable since both the random-model and fixed-model analyses showed similar results.

This quantitative meta-analysis had its limitations. First, several HRs and 95% CIs were obtained based on the survival curves, which might cause bias to the result. Second, despite the usage of subgroup analysis, the heterogeneity across studies could not to be eliminated completely, which could result in bias of the outcome. Finally, we performed the sub-group analysis only based on progesterone receptor expression and ovarian cancer with OS or DFS/PFS/RFS, due to the lack of effective data. Therefore, further investigations are needed to address the above-mentioned shortcomings.

In this Meta-analysis, we performed a comprehensive search for available literatures in electronic databases of PubMed, Embase and Cochrane Central until August 31, 2016. The following search terms were used to identify studies: (PR or “progesterone receptor”) and (“ovarian neoplasm” or “ovarian cancer” or “ovarian carcinoma”) and (prognosis or outcome or survival). In order to guarantee the accuracy and completeness, both abstracts and full texts were screened in detail to exclude irrelevant articles.

To be eligible, studies must meet the following inclusion criteria: (1) Studies covered the correlation between progesterone receptor expression and clinical prognosis among ovarian cancer patients; (2) Studies provided adequate data for extracting and calculating individual HRs and 95% CIs; (3) Original article was written in English.

Studies were excluded due to the following reasons: (1) Duplicated or overlapped studies; (2) Review articles or case reports or conference papers; (3) Articles were not related to ovarian cancer or progesterone receptor.

Two investigators (Hui Luo and Haiyan Zhu) carried out this procedure independently and any disagreement was resolved by consensus.

According to predefined standardized extraction forms, data from each qualified study were extracted by two investigators independently. The collected data included the first author, year of publication, country of origin, histological type, tumor stage, total number of patients, detection method, age, progesterone receptor expression status, follow-up time, outcome endpoint, univariate or multivariate hazard ratio (HR) and the 95% confidence interval (95% CI) for progesterone receptor positive-expression group versus progesterone receptor negative-expression group. Survival data (HR with 95% CI) were extracted from tables or texts of included studies. If the definite information of the statistical variables was not provided in an article, sending an email to the author for the original data was the first choice. If the articles had Kaplan-Meier curves, Get Data Graph Digitizer 2.2 was used to digitize and extract survival information [44]. Multivariate HR and 95% CI were selected when both univariate and multivariate results were reported in an individual study.

As this meta analysis was based on observational studies, a Newcastle-Ottawa Scale (NOS) was adopted for the methodological evaluation. Studies graded with more than five scores were classified as high quality trials in methodology [45].

Data were extracted from the primary publications and meta-analysis was conducted with the use of Stata 12.0 analysis software (Stata Corp LP, College Station, TX). Outcome endpoints were divided into two groups, OS and DFS/PFS/RFS, based on the data acquired.

To investigate the source of heterogeneity, we performed the χ2-based Q-test and I2 test. If P < 0.05 or I2 > 50%, which indicating significant heterogeneity among included studies, a random effect model was used to calculate the pooled HR. Otherwise fixed effect model was used. Additionally, a sensitivity analysis examining the consistency of the pooled outcomes was applied. The internal publication bias across the included studies was statistically investigated via Funnel plots as well as Begg’s test and Egger’s test. All the statistical tests were two-sided, and statistical significance was signified as P less than 0.05.

This work was supported by grants from Zhejiang Provincial Program for the Cultivation of High-level Innovative Health talents.