Gastric cancer is the fifth commonest malignancies and the third leading cause of tumor related death in the world [1]. Moreover, it is the second most common cancer in China [2]. Radical gastrectomy remains the optimal treatment for non-metastatic gastric cancer. Although with the rapid improvement in surgical techniques and adjuvant therapy, the prognosis of advanced gastric cancer is still discouraging [3].

Given this situation, the present study aims to investigate the prognostic value of postoperative fever in gastric cancer patients after radical gastrectomy.

Table 2: Univariate analysis of risk factors for the prognosis of entire cohort. 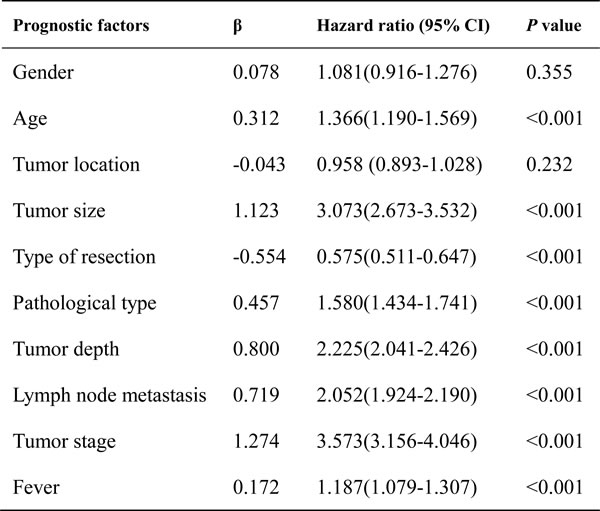 Table 3: Multivariate analysis of risk factors for the prognosis of entire cohort. 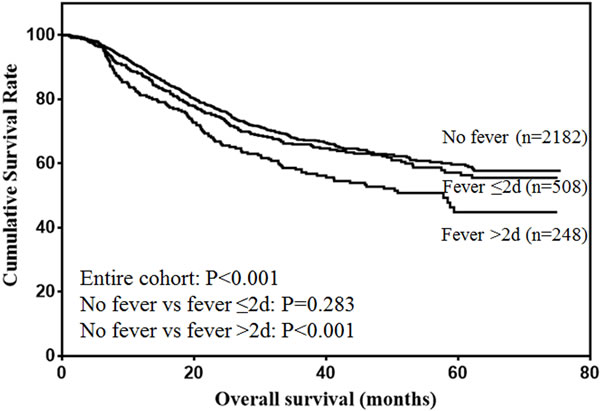 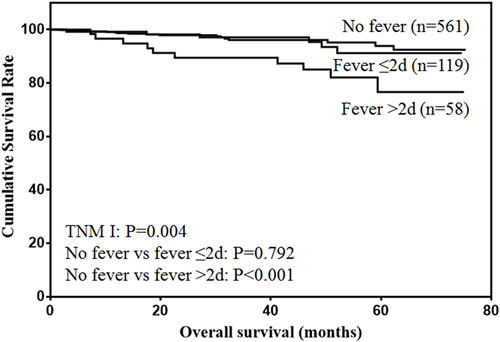 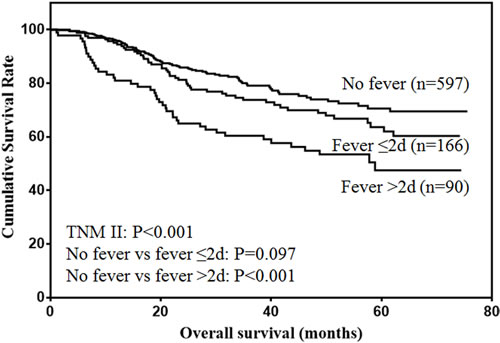 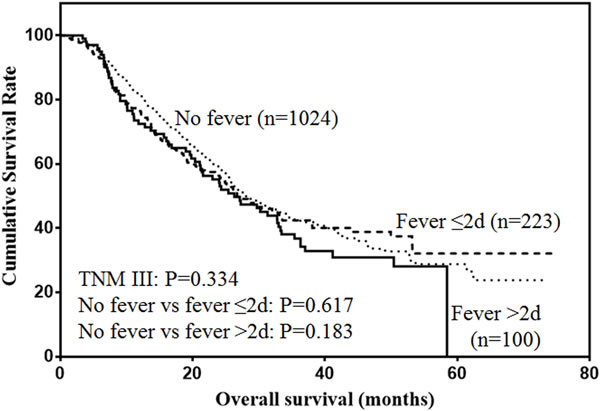 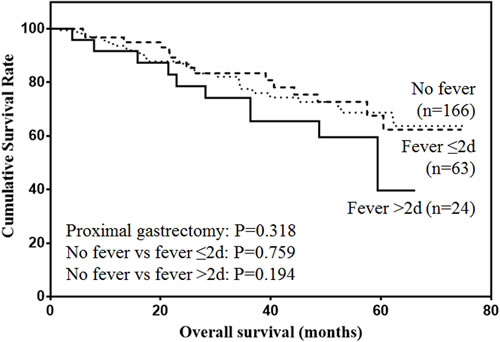 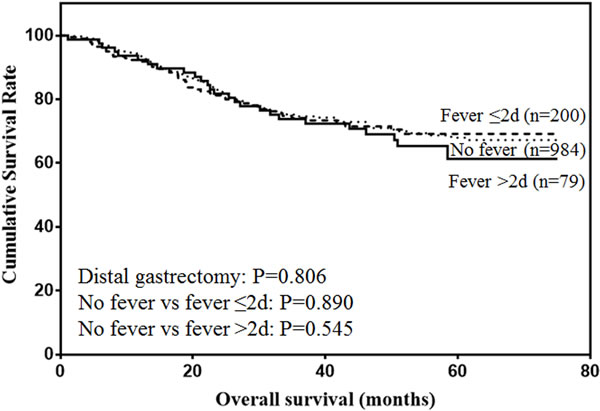 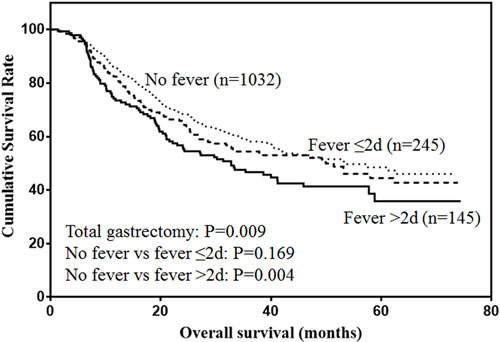 The mechanisms of the influence of postoperative fever on survival of cancer patients is still poorly understood. Serum IL-6 is a thermoregulatory factor during surgery and general anesthesia [14], and is a major endogenous mediator of fever [15]. Levels of serum IL-6 is also elevated in a variety of tumors [16-18]. Thus, postoperative fever may be partly due to the elevated serum IL-6 level in vivo [19]. Experimental studies demonstrated that IL-6 could promote proliferation, invasion and metastasis of tumor cells [20, 21]. Thus, the elevated serum IL-6 level in cancer patients after surgery may promote the recurrence of patients with postoperative fever. Moreover, serum IL-6 produced by tumor cells could increase the drug resistance to chemotherapy [22], which may also contribute to tumor recurrence after surgery. Unfortunately, data about the recurrence of gastric cancer patients was lacking in our present study.

There were some limitations in our present study. Firstly, it was a retrospective analysis with single center’s experience. Multi-center studies are needed to verify the predictive value of postoperative fever in gastric cancer patients. Secondly, all cases of fever were included in the analysis, the prognostic value of infectious and noninfectious fever were not analyzed separately. Because infectious and noninfectious fever may have different prognostic value for gastric cancer patients. Thirdly, fever was not classified into different degrees according to the maximum temperature. Fourth, the influence of physical or medical treatments to reduce body temperature on the survival of patients were not analyzed.

In conclusion, duration of postoperative fever over 48 h was an independent risk factor for the prognosis of gastric cancer patients, especially for stage I/II gastric cancer and patients with total gastrectomy.

This study was performed in the Xijing Hospital of Digestive Diseases affiliated to the Fourth Military Medical University. From September 2008 to March 2015, a total of 2938 gastric cancer patients in our department were enrolled in the present study. The inclusion criteria were listed as follows: 1. without other malignant tumor, 2. without distant metastasis, 3. without neoadjuvant chemotherapy, 4. with radical D2 gastrectomy, 5. with temperature records, 6. with follow up data. This study was approved by the Ethics Committee of Xijing Hospital, and written informed consent was obtained from all patients before surgery.

All patients were treated with proximal, distal or total gastrectomy with D2 lymphadenectomy. The surgical procedure was based on the recommendations of the Japanese Gastric Cancer Treatment Guidelines [10]. The depth of primary tumor and degree of lymph node involvement were defined according to the TNM classification.