The incidence rate and mortality rate of nervous system tumor both rose from 2002 to 2012, according to the latest global cancer statistics [1, 2]. And the incidence rate and mortality rate are higher in more developed areas than in less developed areas, both among males and females [1, 2]. The complete removal of the tumor if possible is the optimal treatment [3]. As to the tumor in the brain, however, the tumor may recur after surgery especially with high World Health Organization (WHO) grade [4, 5]. The predictive factors for recurrence include histological subtype, age, gender and the extent of surgical excision [6, 7]. Though surgical removal of all tumor tissue is important, it is not always possible now. For example, Petrecca et al. found that in patients with glioblastoma failure pattern following complete resection plus radiotherapy and temozolomide was at the resection margin [8]. One of the reasons is that the normal brain tissue must be preserved. Otherwise, it can lead to neurological deficits including impaired motor function, sensory function, memory, vision and audition [9]. Another reason is that the tumor border is always blurred due to the infiltrative growth of tumor tissue. There is no diagnostic technique to define the precise border for tumor excision at present. Therefore, it is urgent to find an effective technique that discriminates brain tumor tissue and normal tissue.

At present, there are conventional diagnostic techniques but all are limited. In situ methods include CT images, MRI, ultrasound sonography and positron emission tomography. They are performed before or after surgery, but the situation may change during the surgery [10]. The incision, dislocation by surgical tools and swelling of the tissue can lead to displacement of the tissue. During surgery, intra-operative MRI requires considerable time and expensive equipment as well. Though florescence-guided surgery and angiography are recommended for malignant tumor, they have inherent difficulties defining the borderline between the low grade and normal tissue [11]. Histopathological diagnosis is purely ex vivo, invasive and time-consuming.

In recent years, many studies were reported on Raman spectroscopy in the diagnosis of various cancers such as tissues of the skin, larynx, breast, esophagus, stomach, cervix and urogenital tract [12-16]. Raman scattering underlies Raman spectroscopic technique. When photons are scattered from a molecule, most photons are elastically scattered, such that the scattered photons have the same energy as the incident photons. A small fraction of the scattered photons have a different frequency from that of the incident photons. Raman spectroscopy tests molecular vibration of asymmetric chemical bonds to detect the inelastic scattering of photons and therefore, provides information on the molecular structure and configuration of the target tissue [17]. Since there are proteomic differences between tumor tissue and normal tissue, Raman spectroscopy can distinguish them at molecular level [17, 18]. Hollon et al. [19] have summarized the Raman spectroscopy techniques in recent years. Also, Raman spectroscopy has several advantages. Water can not disturb the analysis, which remains a problem for other spectroscopic techniques. Also, the fiber-optic probe allows spatial flexibility to achieve non-destructive and non-invasive collection of spectrum [20]. Furthermore, the spectra can be rapidly processed and a result can be offered in real-time during the surgery.

The first studies using Raman spectroscopy for neuro-oncologic applications were from Mizuno et al [21]. At that time, the less-advanced instrumentation and processing software didn’t allow it to be a surgical tool. Recently, many studies have been published to examine the accuracy of Raman spectroscopy in distinguishing brain tumor from normal tissues and to map the spectra of different sections of brain tissue [22, 23]. However, these studies were inconclusive because of insufficient sample and different diagnostic algorithms. The aim of this meta-analysis was to systematically evaluate the accuracy of Raman spectroscopy for discriminating brain tumor and normal brain tissues.

The initial literature research yielded 112 articles. According to the selection criteria, 26 relevant articles were selected and reviewed in full-text for more detailed information. 12 articles were irrelevant and 8 had insufficient details to reconstruct the 2x2 table. Ultimately, 6 studies [17, 18, 24-27] were retrieved according the inclusion criteria. The study selection process was shown in Figure 1. 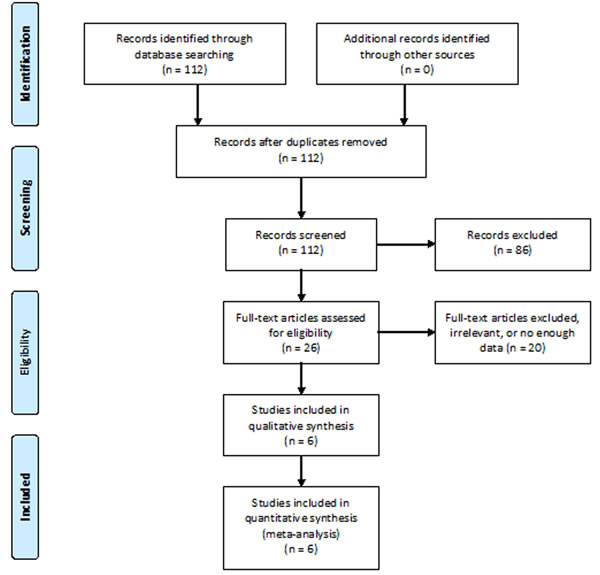 The detailed characteristics of the 6 studies were shown in Table 1. All the articles were published between 2005 and 2015, with 5 of them during the last five years. These studies were operated in 5 different countries. The number of the included patients varied from 7 to 28. The number of tissues involved in each study varied from 3 to 60. The number of the spectra retrieved varies from 16 to 1198. The total number of spectra was 1951, with an average of 325. In these 6 eligible studies, 3 studies identified glioma and 2 studies identified meningioma. The rest study identified both glioma and meningioma. The sample types included ex vivo (during the neurosurgical procedure or after that) and in vivo (only in one study). Three out of 6 articles involved cross-validation. Several diagnostic algorithms were utilized to discriminate spectra of different brain tissues. Raman spectra of the tissue were obtained by 2 types of Raman spectroscopy in these studies.

Figure 2: Individual study and pooled estimates of sensitivity and specificity and their 95% CIs of Raman spectroscopy to differentiate glioma (A and B) and meningioma (C and D) from normal tissues.

Figure 3: Summary receiver operating characteristics (SROC) curve of Raman spectroscopy to differentiate glioma (A) and meningioma (B) from normal tissues.

Two reviewers evaluated methodological quality for each study according to the QUADAS guidelines independently. All QUADAS items were used to evaluate the eligible articles. Table 2 shows the results of the evaluation of each study.

Raman spectroscopy is a promising tool as intraoperative neurosurgical guidance. First, it requires no special staining or any preparation, which makes it possible for the diagnosis in real-time and to be able to minimize the disruption to neurosurgical workflow [24]. Second, it only takes a few minutes to obtain an accurate diagnostic result through Raman while the analysis of tissue used to require hours or even days through traditional analytic technique [28]. Third, Raman spectroscopy causes no harm to the patients, which differs from the traditional biopsy [29]. Besides, the high accuracy of Raman decreases the number of expensive tests, such as immunohistochemical staining, fluorescent in situ hybridization, electron microscopy or karyotyping, which are prescribed to guarantee the correct diagnosis [26]. Furthermore, the handheld Raman probe is small and easy to use during the surgery [30]. Raman spectroscopy can both quickly and effectively detect and analyze brain tissue in vivo as well as providing accurate tumor margin assessment by rapidly scanning [26]. With clear knowledge of margin, it contributes to avoid removal of normal tissue and to minimize the volume of residual tumor which poses a considerable impact on patient survival [24].

Compared with neurosurgical microscopy, Raman spectroscopy does have a restricted field of view. It may be solved by involving complementary imaging technique. Besides, Raman spectroscopy requires proper illumination setup to limit extraneous light sources in measured signal. When we design the operating room for low-intensity spectroscopic signal, engineering solution may be needed [24].

This study also had several limitations. First, this meta-analysis is based on a limited number of studies. Though the number of spectra involved in is large (1951 spectra), more studies are needed. Second, the patient size in each study was small and the numbers of spectra differed sharply among the included studies and this variability might have affected the outcome. Thirdly, the majority of the studies used ex vivo tissue. To prove whether Raman spectroscopy is an optimal diagnostic tool or not, more studies involving in vivo technique are needed. Furthermore, different techniques of Raman spectroscopy, and multiple algorithms were used in the included studies. Finally, the publication bias was a major concern for all meta-analysis. In our meta-analysis, though no publication bias was found (p>0.05), it should be noted that any meta-analysis could not completely exclude biases. Therefore, more studies with more patients examined in vivo are needed.

In conclusion, our study suggested that Raman spectroscopy could be an effective and accurate tool for differentiating glioma and meningioma from normal brain tissue. The application of this promising novel method would improve the accuracy of brain tumor surgery in the future, by both avoiding removal of normal tissue and minimizing the volume of residual tumor. However, more studies are warranted to verify that and more efforts are still needed to improve this equipment and better serve clinical work.

PubMed and Embase were searched to identify suitable studies on Jan 1st, 2016, and no start date limit was applied. The search terms were ‘brain neoplasms’, ‘spectrum analysis, Raman’, and ‘diagnosis’. Reference lists of relevant articles were also searched. No language restriction was applied.

The studies were selected on the basis of the following criteria: 1) only human tissue used in the experiments; 2) Raman spectroscopy was used as a diagnosis tool to distinguish tumor and normal tissues; 3) used histopathology as golden standard; 4) provided with detailed data to construct a 2x2 contingency table for true positive (TP), false positive (FP), true negative (TN) and false negative (FN). If the four values were not reported, we calculated those using indexes such as sensitivity and specificity. Corresponding author were contacted for the detailed data if no enough data was available.

The quality of each study was assessed by using the Quality Assessment of Diagnostic Accuracy Studies (QUADAS) guidelines, which is an established, evidence-based tool for systematic reviews of diagnostic studies designed for diagnostic accuracy [33].

We declare no conflict of interest.

This work was supported by National Natural Science Foundation (NSFC81572850).