Diagnostic and prognostic value of blood samples for KRAS mutation identification in lung cancer: a meta-analysis

KRAS, one of the most frequently mutated oncogenes, contributes to the mitogen-activated protein (MAP) kinase pathway, which controls cell growth and differentiation. [3, 4] The KRAS pathway is also involved in the regulation of lung cancer, participating in the downstream signaling network of epidermal growth factor receptor (EGFR). The most commonly mutated codons are 12, 13, and 61 and this causes drug resistance to EGFR tyrosine kinase inhibitors (EGFR-TKIs). Several studies suggest that KRAS mutations should be known prior to using EGFR-TKI therapy for lung cancer patients. [5-7]

Although tumor tissue is the reference standard for KRAS mutation confirmation, obtaining tissue samples is difficult, costly, and invasive. [8] In addition, most advanced lung cancer patients are unable to tolerate surgical procedures. Thus, a more feasible but accurate method for assaying KRAS mutations is needed. Blood testing is less invasive, easily-accessible and can be repeated. [7, 9] Thus, ctDNA and CTCs can be used as a high diagnostic value and prognostically significant source for identifying KRAS mutations in lung cancer patients.

As shown in Figure 1, our database searched 612 records, of which 59 records were duplicates. After a primary screening of the titles and abstracts, 487 records were excluded. By reviewing full-text articles, we excluded further articles. 12 eligible articles [7, 10-20] with 1131 patients for diagnosis and 11 articles (blood samples) [7, 12, 21-26] for prognosis were included in this meta-analysis. We also included 15 studies in which the KRAS mutation was detected by tumor tissue for prognostic subgroup analysis. [27-40] 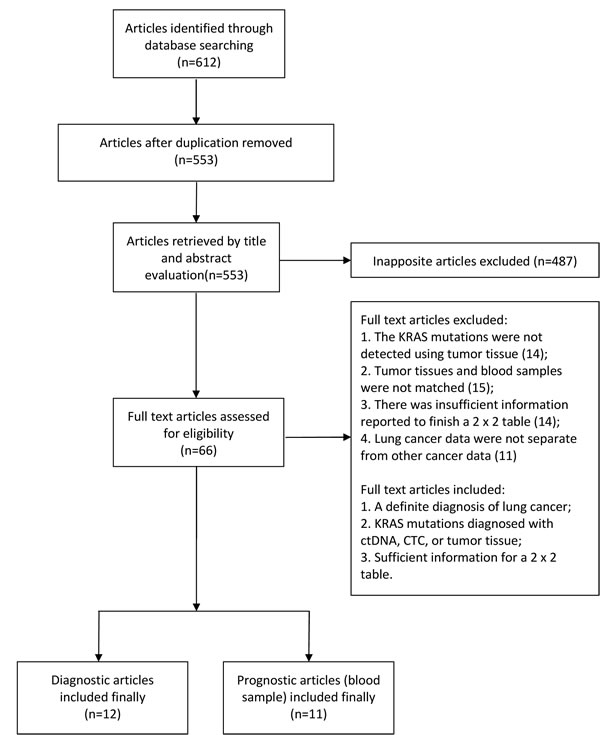 Figure 1: Flow diagram of study inclusion and exclusion for meta-analysis.

Baseline characteristics of eligible studies are shown in Table 1. The included articles were published between 2003 and Jan, 2017. Two articles had more than one combination of statistics. [13, 15] CTC were detected by two methods in Der-An Tsao’s article; and ctDNA and CTC were both detected in the article of Maxim B. Freidin. Most of the included lung cancer patients were at III/IV TNM stage with adenocarcinoma of the lung. All describing 1,131 subjects were included. Characteristics of eligible studies appear in Table 1. A QUADAS-2 plot is shown in Supplementary Figure S1, and sensitivity analysis is presented in (Figure 2A) which was accomplished by excluding studies one by one. Data were stable and were not significantly different. 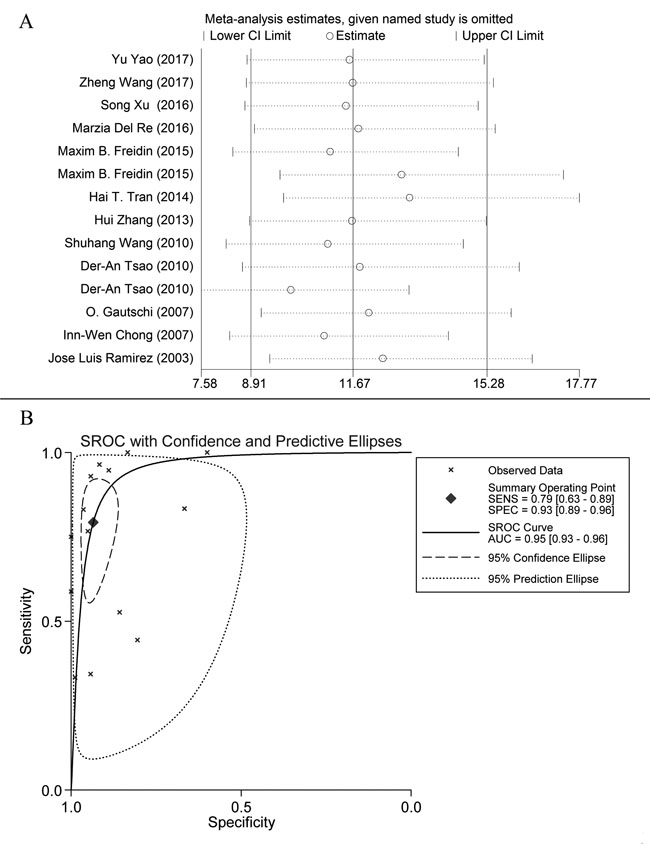 Figure 2: A. Sensitivity analysis plot of meta-analysis. Every row represents an included study. The width of the horizontal line represents the 95% CI for each study. The vertical bar on both sides represents the lowest and highest values of 95% CI. B. SROC curve: each X mark represents a study and AUC is the area under the curve. 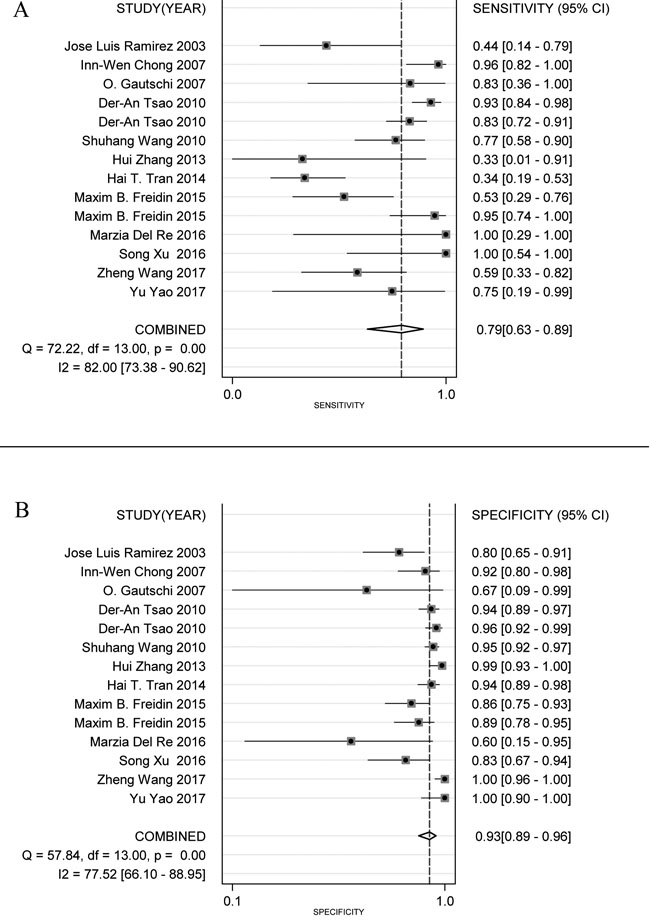 Figure 3: Forest plots of sensitivity (A) and specificity (B) for blood samples (ctDNA and CTC). The width of the horizontal line represents the 95% CI of each study, square proportional means the weight of every study. The weight is evaluated by the sample size and is presented as percent of total. The diamond represents pooled sensitivity, specificity and 95% CI. 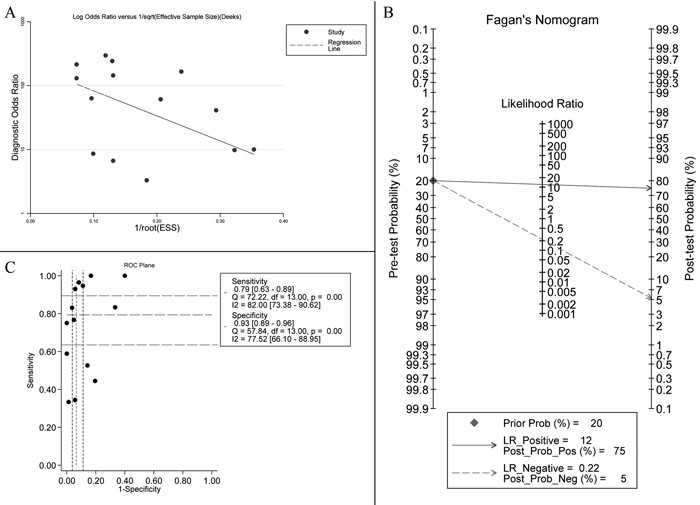 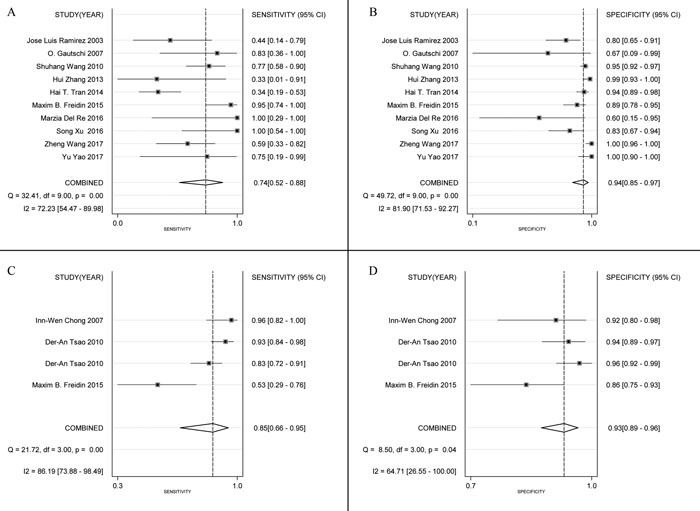 The estimated pooled HRs for OS and PFS is displayed in Figure 6 and data show that poorer prognosis is correlated with KRAS mutations. Subgroup analysis indicated that lung cancer patients with KRAS mutations had a significantly shorter OS and PFS compared to wild-type lung cancer patients. Additionally, there was no significant difference between HRs for blood samples and tumor tissues so both can be used. 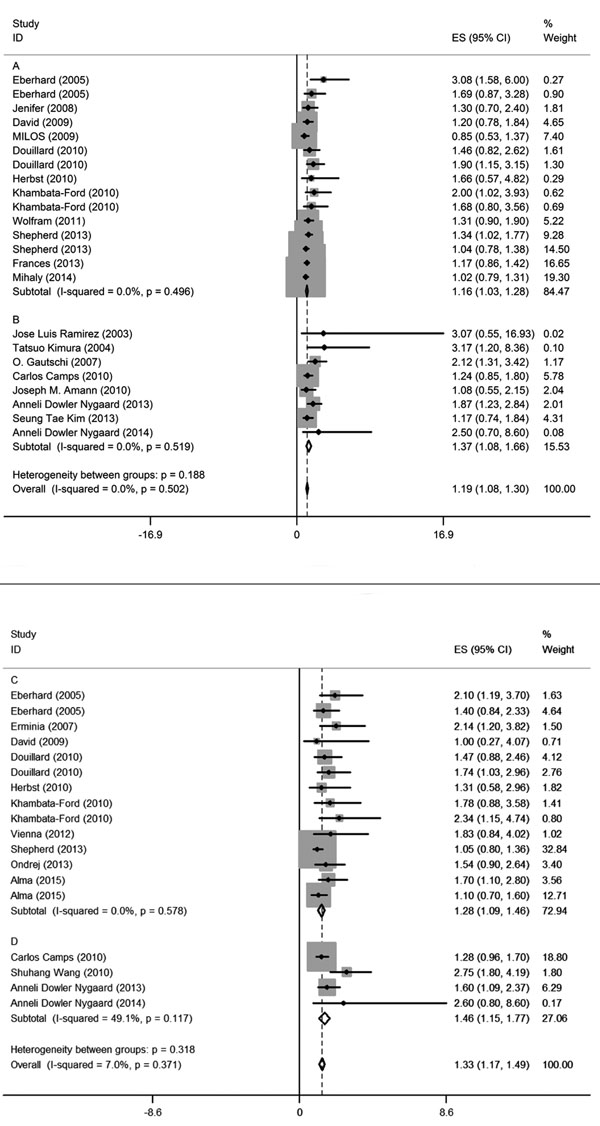 Figure 6: Forest plots of pooled HR for OS (tumor tissue: A, blood sample: B) and PFS (tumor tissue: C, blood sample: D) comparing patients of KRAS mutations with wild-type KRAS. The width of horizontal line represents the 95% CI of each study and square proportional means the weight of every study. Weight is evaluated by sample size and is presented as percent of total. Diamond represents pooled HR and 95% CI.

Detecting KRAS mutations in lung cancer is useful for predicting patient outcomes and targeting therapy and tumor tissue is currently used for this assay. Limitations to this approach include patient age and health, so a simple, minimally invasive approach for measuring KRAS mutations is required and blood sampling may be that solution. To address this issue, we conducted a meta-analysis to evaluate the diagnostic accuracy and prognostic significance of using blood samples for KRAS mutation assay. The results show that blood sampling offered high sensitivity and specificity which suggests that KRAS mutations can be assayed this way when tumor tissue is inconvenient or unavailable. Also, blood samples offered high diagnostic accuracy. [41, 42] Finally, likelihood ratios and post-test probability are also important testing standards. [43] The value of likelihood ratios ranges from 0 to infinity. When likelihood is 2-5, post-test probability is slightly increased. When likelihood is > 10, post-test probability increases significantly. In this study, PLR was 12 and NLR was 0.22, which clearly changed the post-test probability.

Subgroup analysis to identify factors that can influence diagnostic accuracy included race, detection method, and tissue treatment. Data show that compared with Caucasians, KRAS mutations in blood samples of Asians was more accurate and sensitive when using frozen tumor tissue samples and CTC methods compared to FFPE tissue samples and ctDNA. FFPE can lead to a cross-link between proteins and nucleic acids but this did not occurs with nitrogen-frozen tissues. CTC was more sensitive than ctDNA [44], perhaps due to fewer included studies. Detection methods, collection timing, and TNM stage were not analyzed due to too few studies including this information. Subgroup survival analysis indicated that KRAS mutations are associated with significant increases in mortality but there were no differences between blood samples and tumor tissues for OS and PFS, which suggest that blood sampling is suitable for replacing tissue assay.

This is the first meta-analysis to evaluate KRAS mutations in blood samples for treating lung cancer. Liquid biopsies allow identification of molecular targets, assessment of prognosis, monitoring therapeutic response and molecular profiles in real time as well as diagnosis of disease recurrence or progression. We found that liquid was highly accurate and high ctDNA and CTC are correlated with poorer prognosis for lung cancer patients. [45] Thus, ctDNA and CTC can be used to confirm KRAS mutations in lung cancer instead of tumor tissue and suggest details about prognosis. The diagnostic value and prognostic significance of blood sampling for lung cancer patient monitoring is unclear but our data suggest that it is worth investigating.

The meta-analysis has several limitations such as potential publication bias. We used well-selected articles and Supplementary Data and Deek’s funnel plot did not confirm statistical significance (p = 0.170 > 0.05). Second, some studies were small and this may have caused bias but a sensitivity analysis suggested that sample size did not influence pooled results significantly. Third, significant heterogeneity existed in our meta-analysis and the ROC plane and Spearman correlation coefficient data indicated that heterogeneity was not due to a threshold effect. Thus, heterogeneity may be primarily due to small sample studies [12, 17] and differences among study detection methods. Studies also differed with respect to race, TNM classification, and percent of lung adenocarcinomas. We tried to establish a subgroup for test methods but because we had few studies and varied methods within them, this was difficult. Future studies should be designed to evaluate differences in detection methods. Finally, in the prognostic analysis sub-group, most studies did not provide a HR so we calculated one (at 95% CI using a survival curve) and it may indicate result bias.

In conclusion, lung cancer is a leading cause of cancer-specific mortality around the world and with the rapid development of liquid biopsy, CTCs and ctDNA provide a novel method for assaying KRAS mutations in lung cancer. Our meta-analysis indicates that this approach has advantages over other methods and that it is highly specific, non-invasive, and a repeatable measuring approach with diagnostic and prognostic value that allows real-time monitoring.

We reviewed reports published in PubMed, EMBASE, Web of Science and the Cochrane Library. We used these searched terms: ‘KRAS’ or ‘GTPase KRAS’ or ‘V-Ki-ras2 Kirsten rat sarcoma viral oncogene homolog,’ ‘serum’ or ‘plasma’ or ‘circulating,’ ‘mutation,’ ‘cancer’ or ‘carcinoma’ or ‘tumor’ or ‘neoplasm,’ and ‘lung.’ Only studies published in English were included.

Inclusion criteria for primary studies were d a definite diagnosis of lung cancer; KRAS mutations diagnosed with ctDNA, CTC, or tumor tissue; sufficient information for a 2 x 2 table. Articles were excluded if the KRAS mutations were not detected using tumor tissue; tumor tissues and blood samples were not matched; there was insufficient information reported to finish a 2 x 2 table; or lung cancer data were not separate from other cancer data. All selected studies were managed using EndNote X7. Studies included in our meta-analysis were assessed by two investigators independently.

KRAS mutation status in tumor tissues was designed as a reference standard. Diagnostic numbers (TP, FP, FN, TN) were used to calculate pooled sensitivity, specificity, positive likelihood ratio (PLR), negative likelihood ratio (NLR), diagnostic odds ratio (DOR), area under the curve (AUC) and corresponding 95% confidence intervals (95% CI). PLR is calculated as: sensitivity/(1-specificity) and NLR is: (1- sensitivity)/specificity. [47, 48] DOR is a measure of the effectiveness of a diagnostic test, which is defined as PLR/NLR. [41] Summary ROC curves (SROC) and AUCs of the SROC (AUSROC) were measured.

OS was defined as the survival time from randomization and PFS was defined as the time from randomization to progression, recurrence, death or termination of follow-up. When studies did not report HRs directly, two independent investigators calculated survival data from survival curves using an Engauge Digitizer, version 4.1integrated to calculate overall HR. The threshold effect was measured by using the ROC plane, a Spearman correlation coefficient and a p-value. We evaluated race, detection methods, and tissue treatment. Publication bias was measured using a Deek’s funnel plot and (p = 0.218) which indicated no significant bias. [49] All statistical analyses were performed using STATA software (version 12.0, STATA Corp, MIDAS module) and Meta-Disc. Quality assessment was managed with Review Manager 5.3.

We are grateful to everyone who helped complete this study successfully.

28. Campos-Parra AD, Zuloaga C, Manriquez ME, Aviles A, Borbolla-Escoboza J, Cardona A, Meneses A, Arrieta O. KRAS mutation as the biomarker of response to chemotherapy and EGFR-TKIs in patients with advanced non-small cell lung cancer: clues for its potential use in second-line therapy decision making. Am J Clin Oncol. 2015; 38: 33-40. doi: 10.1097/COC.0b013e318287bb23.

48. Jaeschke R, Guyatt GH, Sackett DL. Users’ guides to the medical literature. III. How to use an article about a diagnostic test. B. What are the results and will they help me in caring for my patients? The Evidence-Based Medicine Working Group. Jama. 1994; 271: 703-7.