Preoperative pulmonary function assessment is used to select surgical candidates and predict the occurrence of postoperative complications. The present study enrolled 1210 gastric cancer patients (949 males and 261 females). Forced vital capacity (FVC) and maximal voluntary ventilation (MVV) were measured as a percent of predicted values. We then analyzed associations between patient pulmonary function and both prognosis and postoperative complications. Patient 1-, 3- and 5-year overall survival rates were 88.8%, 65.7% and 53.0%, respectively. FVC and MVV optimal cutoff values were 87.0 (P=0.003) and 83.6 (P=0.026), respectively. Low FVC and low MVV were associated with higher rates of postoperative fever (23.8% vs. 13.9%, P<0.001; 17.8% vs. 13.3%, P=0.049, respectively) and poor patient prognosis (5-year overall survival: 43.5% vs. 57.6%, P=0.003; 51.8% vs. 54.3%, P=0.026, respectively). Only low FVC was an independent prognostic predictor for gastric cancer (P=0.012). In subgroup analyses, FVC was not associated with stage I or II gastric cancer patient prognoses (P>0.05), but low FVC was an independent risk factor for poor prognosis in stage III gastric cancer cases (P=0.004). These findings indicate that low FVC is predictive of poorer prognosis and higher risk of postoperative fever in gastric cancer patients.

Gastric cancer is the fifth most common malignancy, and the third leading cause of cancer-related death worldwide [1], although incidences have declined in recent decades. Surgical therapy remains the optimal treatment for non-metastatic gastric cancer. Still, even with advances in surgical techniques and adjuvant therapy options, advanced gastric cancer patient prognoses are poor [2]. 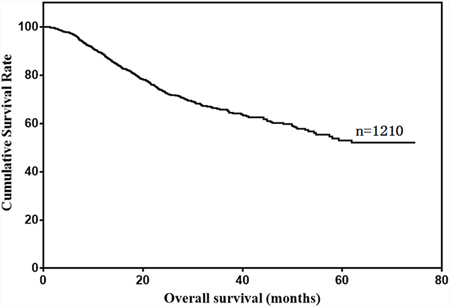 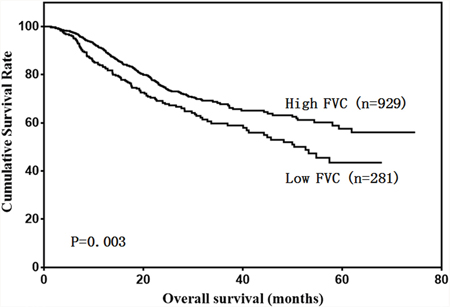 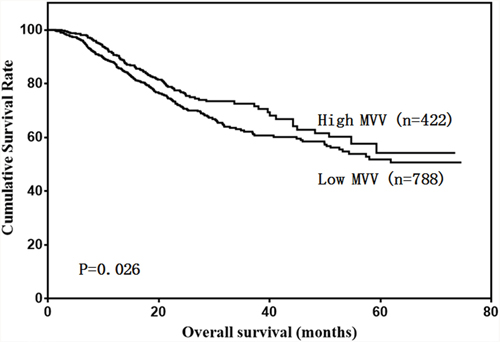 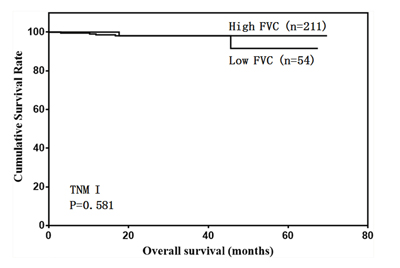 Figure 4: Overall survival of stage I patients according to FVC level. 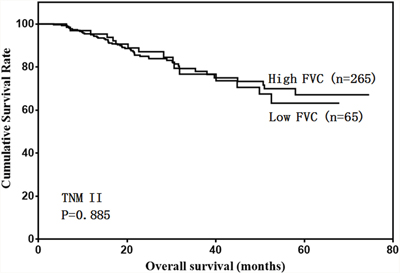 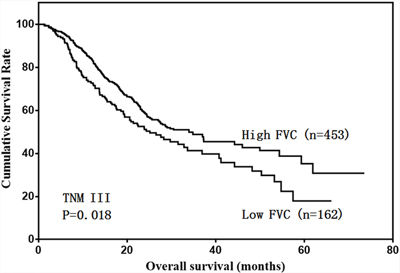 Pulmonary disease is seldom clinically diagnosed unless a patient presents with overt respiratory symptoms. Thus, preoperative screening for pulmonary disease usually depends on a given patient’s previous medical history. Preoperative screening using pulmonary function testing is likely to be more valuable than conventional assessment in terms of evaluating pulmonary abnormalities and predicting postoperative complications [7]. However, while preoperative pulmonary function testing is accepted as an effective tool for predicting operative risk before thoracic surgery [8], it is not yet routinely performed for gastric cancer patients before surgery.

Cachexia and weight loss in advanced gastric cancer patients were important factors predicting long-term survival. Poor respiratory function may be partly attributed to cancer-induced cachexia. Our study found that although BMI, total protein, and albumin were all associated with gastric cancer patient prognosis, FVC was the only independent risk factor for prognosis.

Multiple groups have investigated the association between FVC and survival in the general population [15–17]. Burnery, et al. reported that FVC, but not airway obstruction, predicts survival in asymptomatic adults without chronic respiratory diagnoses or persistent respiratory symptoms [16]. Low FVC was associated with increased mortality risk [18]. We suggest two possible explanations for these findings, both of which strengthen the case for using pulmonary function testing in gastric cancer patients prior to surgery. First, pulmonary function tests may reflect muscle strength and general energy levels, and physical and psychological disorders may manifest as lower values. Thus, these tests may indicate an individual patient’s overall health. Second, poor fetal growth rates and lower birth weights may result in reduced lung function and increased risk of cardiovascular disease [19, 20]. In these cases, FVC may reflect overall cardiopulmonary function as well as general health.

There were several limitations in our present study. First, it was a retrospective analysis limited to a single center. Multi-center studies are needed to verify the predictive value of FVC. Second, our patient cohort was not large enough, and small sample sizes can result in biased statistical analyses. Third, we did not evaluate the predictive value of FVC after radical gastrectomy. Postoperative pulmonary function may play roles in gastric cancer patient prognosis, and should be explored.

Although preoperative pulmonary function has been associated with postoperative respiratory complications, the prognostic value of preoperative pulmonary function in gastric cancer patients undergoing radical surgery had not yet been investigated. In conclusion, our study demonstrated that low FVC and MVV were associated with poor prognosis and higher rates of postoperative fever in gastric cancer patients, and FVC was an independent prognostic predictor.

This study was performed at the Xijing Hospital of Digestive Diseases affiliated with the Fourth Military Medical University, China. From October 2008 to March 2015, a total of 1210 gastric cancer patients in our department were enrolled in the present study. Inclusion criteria were as follows: 1. without other malignant tumors, 2. without distant metastasis, 3. without neoadjuvant chemotherapy, 4. with radical D2 gastrectomy, 5. with preoperative pulmonary function test. This study was approved by the Ethics Committee of Xijing Hospital, and written informed consent was obtained from all patients before surgery.

All patients were treated with proximal, distal or total gastrectomy with D2 lymphadenectomy. The surgical procedure was based on the recommendations of the Japanese Gastric Cancer Treatment Guidelines [21]. Primary tumor depth and degree of lymph node involvement were defined according to the TNM classification. Postoperative chemotherapy was administrated according to the National Comprehensive Cancer Network guidelines.