Background: The role of Foxo3a in the regulation of autophagy flux and activation of the NLRP3 inflammasome in KCs suffering from HFD conditions is unknown.

Materials and methods: Autophagy flux in KCs and activation levels of NLRP3 inflammasome were evaluated after altering the expression of Foxo3a in KCs before stimulation with PA and LPS. Additionally, various target genes of Foxo3a were measured in KCs pretreated with an agonist (Iturin A) or inhibitor (SC97) of Foxo3a after KCs stimulation with PA and LPS in order to hunt for targets of Foxo3a. Activation levels of NLRP3 inflammasome in isolated KCs, as well as autophagy flux, were measured after mice were treated with Iturin A and fed with a HFD for 16 weeks.

Conclusions: Foxo3a restores autophagy flux and attenuates the activation of the NLRP3 inflammasome by promoting the transcription of Bim, suggesting a potential therapeutic target in NAFLD and other obesity-related diseases.

Non-alcoholic fatty liver disease (NAFLD) is an increasing hepatic disease with a worldwide distribution [1]. Pathological processes in NAFLD include excessive accumulation of fat in the liver tissue as well as long-lasting and low grade inflammation, which eventually causes steatosis or even more malignant changes [2–3]. Increasing studies have confirmed that liver resident macrophages, Kupffer cells (KCs), mediate inflammation that aggravates the pathological processes of NAFLD [4–5]. The number of KCs is not changed in liver tissue bordering regions of steatohepatitis; however, fat-laden KCs accelerate inflammatory necrosis via altering their polarization state and activating the myeloid differentiation molecular 88 (MYD88)-dependent Toll-like receptor 4 (TLR4) signaling pathway [6]. In addition, free fatty acid and lipopolysaccharide (LPS) translocation from the gut leads to oxidative stress and stress in the endoplasmic reticulum, which causes production of harmful reactive oxygen species (ROS) and mitochondrial DNA (mtDNA) oxidative damage [7]. Activation of the TLR4 pathway and ROS damage both cue assembly and activation of the nucleotide oligomerization domain (NOD)-like receptor family pyrin domain containing 3 (NLRP3) inflammasome, which makes caspase-1 self-cleave to promote the secretion of mature interleukin (IL)-1β and IL-18 [8].

NAFLD is both a process and outcome of persistent inflammation and disorders of lipid metabolism [14]. Recently, Liu et al. asserted that macrophage autophagy is impaired in high fat diet (HFD)-fed mice, with proinflammatory macrophage polarization [15]. Autophagy is a highly conserved biological phenomenon that maintains homeostasis and adapts to changes in the microenvironment [16]. Autophagy is initiated when the cell’s sensory receptors perceive harmful intracellular and extracellular factors such as starvation, ROS, toxic lipid, LPS, and inflammation mediators [17]. NLRP3 inflammasome activation also initiates autophagy in macrophages, and loss of autophagy in macrophages enhances the activation of NLRP3 inflammasome inflammatory pathways and down-regulates the stability of mitochondria via excessive ROS generation [18]. However, formation of autolysosomes in macrophages is blocked when the mice are fed a HFD [15]. This suggests that autophagy restoration can restrain the damage caused by NLRP3 inflammasome activation in NAFLD.

Fork O3A protein (Foxo3a) is a member of the Fork frame transcription factor family, and it has been asserted that AMP-activated protein kinase (AMPK)-dependent phosphorylation of Foxo3a represses transcription of S phase kinase-associated protein 2 (SKP2), which subsequently initiates autophagy formation in nutrient-deprived conditions [19]. Conversely, liraglutide protects mice from a HFD by promoting autophagy through the silent information regulator 1 (SIRT1)/SIRT3-Foxo3a pathway [20]. Thus, Foxo3a coordinates a protective effect of the autophagy process in over-nutrition conditions. Additionally, Foxo3a interacts with NF-κB in the cytosol to prevent Foxo3a degradation and NF-κB nuclear translocation [21]. In this way, proinflammatory signaling pathways are efficiently inactivated. Additionally, Foxo3a phosphorylates inhibitor of NF-κB α (IκB-α) to activate the NF-κB pathway when macrophages are stimulated by LPS [22]. The status of NF-κB directly impacts the activation of the NLRP3 inflammasome pathway as mentioned above. Presumably, Foxo3a bridges autophagy program initiation and NLRP3 inflammasome pathway activation in KCs suffering from excessive free fatty acid (FFA) and LPS. However, little is known about the effects and patterns of Foxo3a in KCs regarding the regulation of the autophagy program and the NLRP3 inflammasome pathway in NAFLD. Therefore, we investigated and have found an autophagy flux change, as well as an activation level change of the NLRP3 inflammasome pathway, after altering the expression of Foxo3a in KCs under FFA and LPS stimulation in vitro. Additionally, we have found that mRNA levels of Bim are significantly changed with the alteration of Foxo3a in KCs under FFA and LPS stimulation among Foxo3a targeted transcription genes. Furthermore, overexpression of Bim, which leads to up-regulation of Beclin 1 in KCs that are pretreated with a Foxo3a inhibitor restores autophagy influx and attenuates NLRP3 inflammasome pathway activation. Autophagy flux and NLRP3 inflammasome status in KCs were also evaluated in mice fed with a HFD. Liver steatosis and insulin tolerance in the HFD-mice treated with a Foxo3a agonist were milder than in mice fed a HFD alone. In addition, autophagy flux was increased and NLRP3 inflammasome activation was dampened in KCs isolated from HFD-mice treated with a Foxo3a agonist. Therefore, we have illuminated another pattern of Foxo3a function in KCs for regulating the autophagy program and the NLRP3 inflammasome pathway in NAFLD.

Combination effects of PA and LPS on activation of the NLRP3 inflammasome, autophagy flux and Foxo3a expression in KCs 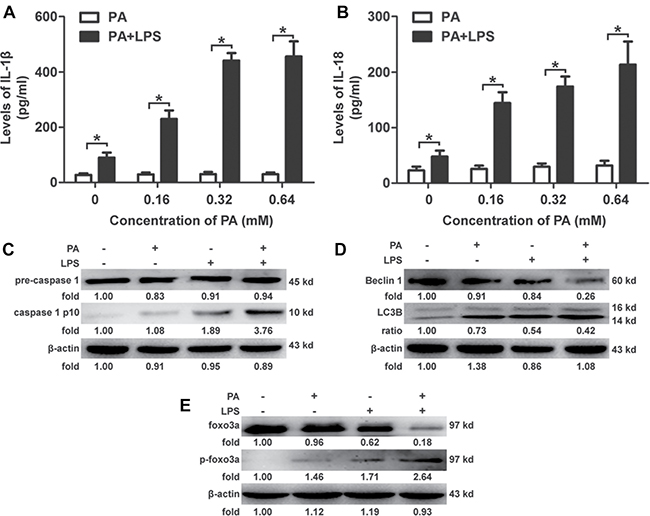 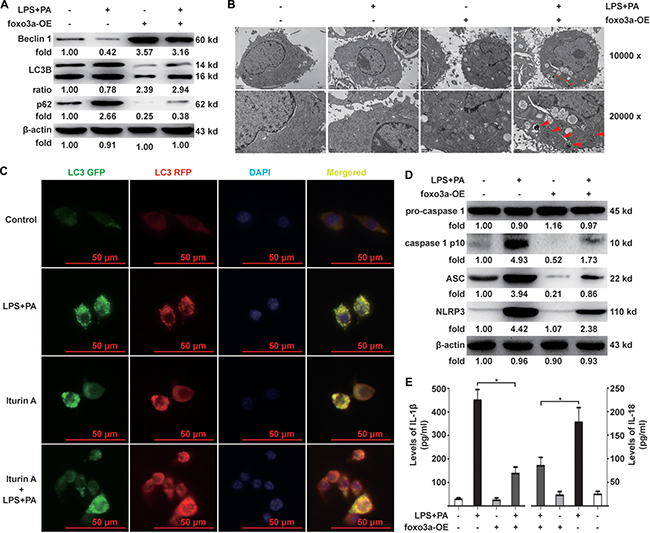 Effects of Foxo3a in mice fed with a HFD 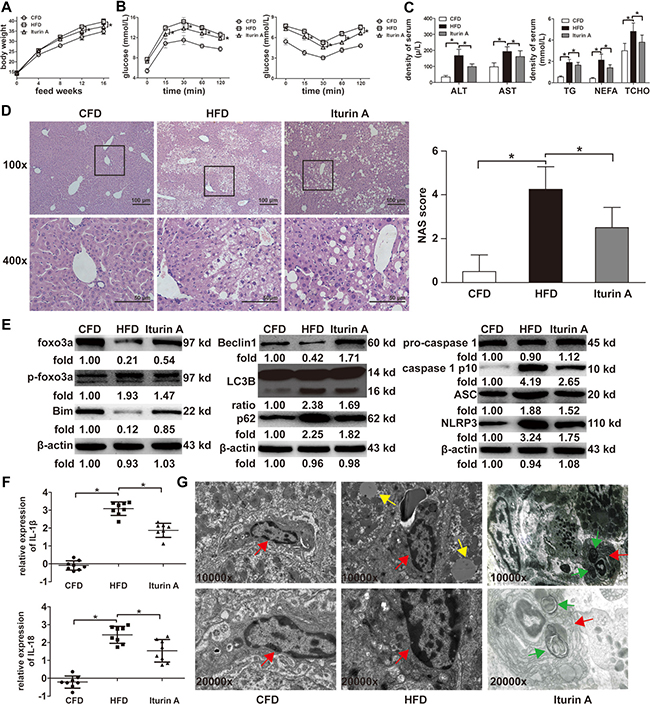 Accumulation of excessive and toxic lipids in the liver causes persistent, low-level inflammation and ROS [26]. KCs, the resident macrophages in liver tissue, are first triggered and initiated an innate immune response [4–5]. Additionally, the innate function of KCs such as phagocytosis and autophagy, are impaired by FFA [15, 27]. Impairing autophagy in KCs triggers the KCs to M1 polarization, which increases the immune response in obese mice [15]. Previous studies have asserted that autophagy flux attenuates activation of the NLRP3 inflammasome pathway in macrophages [18, 28]. Thus, restoration of autophagy flux in KCs may theoretically dampen the damage caused by the NLRP3 inflammasome.

Autophagy is induced by many molecules in different cells under relevant conditions. Chen et al. have asserted that Dihydromyricetin promotes autophagy-related genes and suppresses liver ischemia and reperfusion-induced apoptosis via elevating expression and nuclear translocation [29]. Liu et al. have confirmed that osteopontin induced autophagy promotes chemoresistance in hepatocellular carcinoma cells via sustaining Foxo3a stability [30]. Consistently, the data in this study have shown that autophagy flux previously impaired by PA and LPS can be restored via overexpression of Foxo3a, which subsequently alleviates activation of the NLRP3 inflammasome. Conversely, Shin et al. have asserted that nutritional deprivation promotes autophagy flux via Foxo3a phosphorylation nuclear exportation, which represses transcription of SKP2 in mouse embryonic fibroblasts [19]. Collectively, Foxo3a induces autophagy flux via altering its transcriptional activity under different stress conditions; there are the main ways in which Foxo3a participates in the regulation of autophagy. In this study, the transcriptional activity of Foxo3a was inhibited by PI3K/AKT activation in KCs treated with PA and LPS, leading to the blockage of autophagy flux.

Foxo3a rapidly mounts an autophagy program under stressful conditions via maintaining gene transcription [31]. Foxo3a is involved in autophagy programs via inducing downstream target gene expression, such as manganese superoxide dismutases, catalase, Bim, Noxa, FasL, TRAIL, p21, p27, PUMA and SKP2 [32]. These genes regulate to ROS, apoptosis and autophagy. In this study, only Bim was dramatically decreased in KCs treated with PA and LPS, which is consistent with the down-regulation of Foxo3a in the nucleus. Bim, a pro-apoptotic factor and a member of the Bcl-2 family, integrates with Dynein at the LC8 light chain at rest and is inactive [33]. Bim and the LC8 are separated from the complex and become activated under stress conditions [33]. Additionally, Beclin 1 is anchored to the BH3 region of Bim and connected with LC3 when the autophagy program is inhibited [25]. Beclin 1 is released into the cytoplasm to initiate the autophagy program as soon as Bim is activated through phosphorylation [25]. Furthermore, Dynein, once separated from Bim, also participates in the autophagy program from autophagosome to autolysosome [34]. Thus, the Foxo3a-dependent promotion of Bim transcription protects mice from HFD.

In conclusion, Foxo3a is depressed in the nucleus while autophagy is impaired, and NLRP3 inflammasome is activated in KCs. Over-expression of Foxo3a restores autophagy flux and attenuates activation of the NLRP3 inflammasome via promoting the transcription of Bim, which induces Beclin 1 separation from LC8 and initiates the autophagy program. This is another pattern of Foxo3a regulation of autophagy, suggesting a potential therapeutic target in NAFLD and other insulin resistance-related diseases.

Isolation and treatment of murine KCs

Isolation of KCs was performed according to our previously published methods [35]. The purity of isolated KCs was greater than 70%. Purified KCs were treated with increasing doses of PA (P5585, Sigma, USA) (0–0.64 mM) for 12 h after pretreatment with LPS (L5293, Sigma, USA) for 1 h. PA was dissolved in 0.01mol/L sodium hydroxide at 70°C for 30 min, then mixed with 30% BSA at 70°C before sterilization and used it directly after preparation. LPS was dissolved in 0.01 M sterile phosphatic buffer solution (PBS) at room temperature. The phosphorylation levels of Foxo3a, as well as the supernatant levels of IL-1β and IL-18, were measuredd to seek an optimal concentration for later experiments.

foxo3a-OE plasmid and Foxo3a-shRNA, Bim-OE plasmid and Bim-shRNA, as well as mRFP-GFP-LC3 and GFP-LC3-deficient adenoviruses, were purchased from Genecopoeia Inc. (USA). OE plasmids and shRNA were transfected with Lipofectamine®3000 into KCs for 48 h, and the efficacy effect was greater than 50% (Supplementary Figure 1A and 1B). KCs were infected with mRFP-GFP-LC3 and GFP-LC3-deficient adenoviruses according to the manufacturer instruction. LC3 punctae were observed by fluorescence microscopy after stimulation with PA and LPS. The excitation wavelength for RFP-LC3 was 550–590 nm, for GFP-LC3 was 395–495 nm, and for DAPI was 358–360 nm

KCs were collected, fixed and solidified according to routine methods. After drying naturally, the samples were adhered to the slices. KCs in the slices were observed with transmission electron microscope (TEM).

The supernatant levels of IL-1β (EK0394, Boster, China) and IL-18 (C507380, Sangon Biotech, China) were quantified using commercially available ELISA kits. All the operations were in strict accordance with the manufacturer’s instructions.

Pathogen-free C57BL/6 mice (male, 13–15 g, 4 weeks old) were obtained from the Experimental Animal Center of Chongqing Medical University, Chongqing, China. Mice were allowed free access to sterile water and food with good human care. All protocols related to animals were approved by the committee on ethics of the Chongqing medical university and according to the National Institutes of Health Guidelines.

Liver tissue was fixed using 4% paraformaldehyde at 37°C for 48 h before being embedded in paraffin. The paraffin samples were cut into 3- to 5-μm sections, followed by dewaxing and hydration. For histology analysis, the sections were stained using hematoxylin and eosin. Liver histology samples were scored for an NAFLD activity score (NAS) by three experienced pathologists according to the Kleiner Scoring System [37].

All data were expressed as the mean ± standard deviation (x ± s) and analyzed using SPSS18.0 software (USA). The comparison of multiple groups was performed using one-way ANOVA, and two independent samples were analyzed using the Student’s T-test. A p value less than 0.05 was set as a significant difference.

This study was supported by the National Natural Science Foundation of China (No. 31370753).

26. Cusi K. Role of obesity and lipotoxicity in the development of nonalcoholic steatohepatitis: pathophysiology and clinical implications. Gastroenterology. 2012; 142:711–25.e6.