Combined effects of glutathione S-transferase M1 and T1 polymorphisms on risk of lung cancer: evidence from a meta-analysis

Lung cancer has become the most common cancer and the leading cause of cancer death in the world [1]. There were about 219,440 lung cancer cases and 159,390 deaths expected in the United States in 2009 [2]. In recent years, the incidence of lung cancer in Asia increased rapidly [3]. Tobacco smoking is clearly the strongest risk factor for lung cancer [4]. However, not all smokers develop lung cancer, which indicates that other causes, including genetic susceptibility, may contribute to development of lung cancer [5–6].

Possible lung cancer susceptibility genes have been sought among tumor suppressor genes, DNA repair genes, and genes encoding phase I and phase II enzymes [7]. Glutathione S-transferases (GSTs) comprise a multi-gene family encoding enzymes, is phase II transformation enzymes involved in the detoxification of hazardous agents [8]. Acting nonenzymically, GSTs can modulate signalling pathways of cell proliferation, cell differentiation and apoptosis [9]. GSTs can be classified into at least four genetically distinct groups including Glutathione S-transferase M1(GSTM1) and Glutathione S-transferase T1(GSTT1) [10]. GSTM1 and GSTT1 are two of the most important GST variants. GSTM1 located on chromosome 1p13.3 with 10 exons and GSTT1 is mapped at chromosome 22q11.23 and contains six exons. Individuals with the homozygous deletion of the GSTM1 and GSTT1 locus (GSTM1 null and GSTT1 null) have no enzymatic functional activity [11].

Relevant publications were retrieved and preliminarily screened. As shown in Figure 1, 672 potentially relevant publications were identified. Of these, 549 publications were excluded after reading the title or abstract because of obvious irrelevance with our study aim (this included review, case reports, meta-analysis, conference abstract, letter, editorial, and other genetic polymorphism). In addition, of these published articles, 2 articles [49, 51] were excluded because of their sample size overlapped with another 2 articles [41, 27]. As summarized in Supplementary Table 1, 40 publications with 44 case–control studies were selected for the meta-analysis, including 13,706 cases and 13,093 controls. Among these publications, 21 were Caucasians, 14 were Asians, 3 were Indians, 3 were Africans, and 3 were mixed populations. In addition, 7 were Chinese articles and 37 were English articles. Last, 31 were hospital-based studies and 13 were population-based studies. 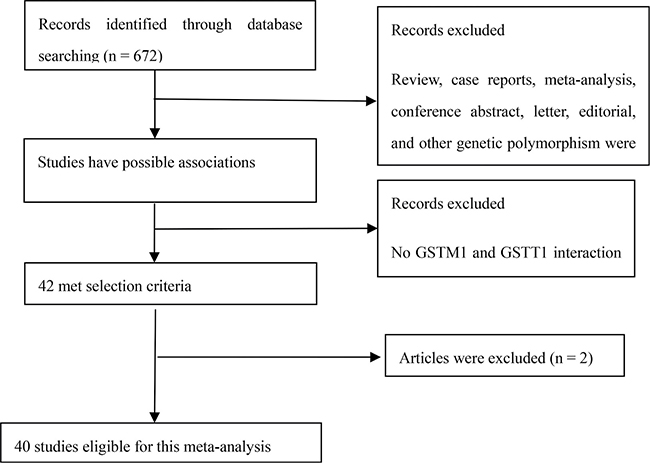 Figure 1: Flow diagram of selection process to identify eligible studies in the meta-analysis. 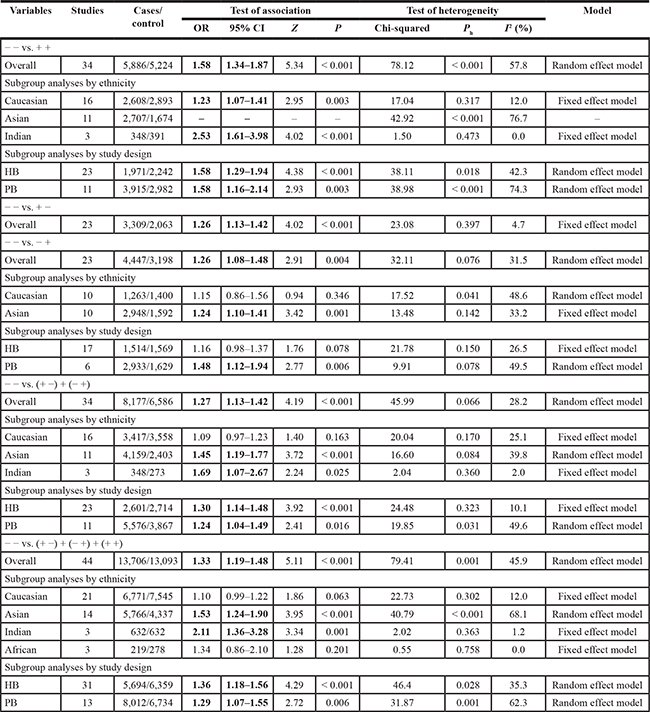 Figure 2: Forest plot of the the combined effects of GSTM1 and GSTT1 polymorphisms and lung cancer risk in Caucasians (− − vs. + +).

Figure 3: Forest plot of the the combined effects of GSTM1 and GSTT1 polymorphisms and lung cancer risk in Asians (dominant model).

Significant heterogeneity was observed in the meta-analysis, as shown in Table 1. Hence, we used meta-regression analysis to assess the source of heterogeneity by ethnicity, source of controls, and language. The results indicated that ethnicity, source of control, and language did not contribute to substantial heterogeneity in the meta-analysis. I2 > 75.0% was observed in Asians (− − vs.+ +), however, when the study of Cao YF et al. [45] was excluded, heterogeneity values dropped in Asians (− − vs. + +: I2 = 72.5%). In addition, exclusion of the study of Cao YF et al. [45] resulted in a statistically significant association between the combined effects of GSTM1 and GSTT1 polymorphisms and lung cancer risk in Asians (− − vs. + + : OR = 1.91, 95% CI: 1.34 to 2.74, P < 0.001). 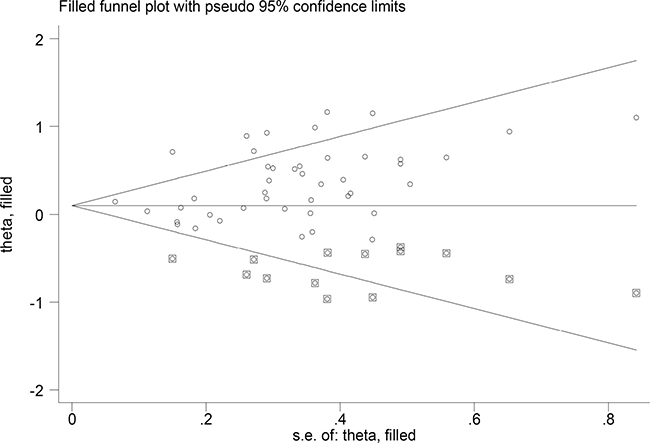 Lung cancer, accounting for 13 % (1.6 million) of all cancers and 18 % (1.4 million) of all cancer deaths in 2008, has become the most common cancer in the world [1]. Gene polymorphism factor has been reported to be an important factor which increases the susceptibility of lung cancer. Some genetic polymorphisms alters the enzyme activity and leads to individual differences in the susceptibility to cancer [67]. GSTM1 and GSTT1 null genotype lost enzymatic functional activity, therefore, may increase the risk of lung cancer. To date, a series of previous meta-analysis have only focused on the association between single GSTM1 or GSTT1 gene polymorphism and lung cancer risk [12–14, 63, 64]. However, the combined effect of GSTM1 and GSTT1 has not been reported previously. In addition, many studies have been performed to evaluate the association between the combined effects of glutathione S-transferase M1 and T1 polymorphisms and lung cancer risk. However, the results were inconsistent or even contradictory. Therefore, we performed a meta-analysis to investigate the combined effects of GSTM1 and GSTT1 polymorphisms and lung cancer risk.

In this meta-analysis, several limitations should be acknowledged. First, due to the limited participant data provided by individual studies, we could not examine the interactions among gene-environment. Second, only published articles were included in this study, which may cause publication bias. Third, the controls were not uniformly defined. However, the current meta-analysis has also particular strengths. First, our meta-analysis explores and analyzes the sources of heterogeneity. Second, This is the first meta-analysis to explore the combined GSTM1 and GSTT1 effects and lung cancer risk. Third, a meta-analysis is statistically more powerful than any single study. Fourth, the quality of eligible studies met our inclusion criterion in the meta-analysis.

In summary, this meta-analysis indicates that the combined effects of GSTM1 and GSTT1 polymorphisms is associated with increased lung cancer risk in Asians, Caucasians, and Indians. As we only explored the association between two combined genes and lung cancer risk, there is still leaving much to be studied in depth. To further evaluate the effects of gene–gene interaction on lung cancer risk, a population-based study on large size of samples is required.

Identification and eligibility of relevant studies

We searched the electronic databases including PubMed, Embase, Web of Science, and two Chinese databases China National Knowledge Infrastructure (CNKI) and Wanfang Data (the last search update was August 8, 2016) with The following key words (“Glutathione S-transferase M1 or “GSTM1”, “Glutathione S-transferase T1 or “GSTT1”, “variant” or “variation” or “polymorphism”, and “lung”. The search was performed without any restrictions on language. In addition to the electronic database search, we reviewed manually the reference lists of retrieved articles to identify additional articles.

The included studies met the following criteria: (1) patients had a diagnosis of lung cancer; (2) evaluated combination effects of the GSTM1 and GSTT1 polymorphisms and lung cancer risk; (3) used case–control or cohort studies; (4) provided sufficient data of combined genotypes for the GSTM1 and GSTT1 polymorphisms in lung cancer patients and controls; (5) reviews, conference abstracts, letters, and editorials were excluded; (5) duplications of previously published data were excluded (if more than one article was published using the same case data, only the article with the largest sample size was selected). The following data were collected from each study: (1) first author’s name; (2) year of publication; (3) country of origin; (4) ethnicity; (5) source of controls (population-based controls and hospital-based controls); (6) language; (7) numbers of cases and controls in the combined genotypes for the GSTM1 and GSTT1 polymorphisms whenever possible. Ethnicity was categorized as ‘‘Caucasian’’, ‘‘Asian’’, and “African” (including African Americans). We also considered the samples of studies from India and Pakistan as of “Indian”. Last, When one study did not state which ethnic groups was included, or if it was impossible to separate participants according to phenotype, the sample was termed as ‘‘mixed population’’.

The association between the combined effects of GSTM1 and GSTT1 polymorphisms and lung cancer risk was calculated by the crude odds ratios (ORs) as the combined study effect size and summary statistics with 95 % confidence intervals (CI) in a dominant model (− − vs. (+ −) + (− +) + (+ +)), a recessive model (− − vs. (+ −) + (− +)), and a co-dominant model (− − vs. + +, − − vs. + −, and − − vs.− +). − − represented GSTM1 null GSTT1 null genotype. + − represented GSTM1 present GSTT1 null genotype. − + represented GSTM1 null GSTT1 present genotype. + + represented GSTM1 present GSTT1 present genotype. The significance of the pooled OR was determined by the Z-test, and P < 0.05 was considered as statistically significant. Statistical heterogeneity among studies was assessed by the chi-square-based Q test [57] and I2 value [58]. In heterogeneity tests, when P < 0.1, a random-effects model was used [59], otherwise a fixed-effects model was performed [60]. Meanwhile, if I2 ≥ 50%, 50% > I2 ≥ 25% or 0 < I2 < 25%, we identified the studies as high, middle or low heterogeneity, respectively. Publication bias was analyzed by Egger’s linear regression test [61]. If publication bias existed, the Duval and Tweedie nonparametric “trim and fill” method was used to adjust for it [62]. Sensitivity analysis was performed by excluding one study at a time to evaluate the stability of the results. A meta-regression analysis was carried out to identify the major sources of between-studies variation in the results, using the log of the ORs from each study as dependent variables, and ethnicity, language and source of controls as the possible sources of heterogeneity. All statistical tests were performed by STATA version 10.0 (STATA Corporation, College Station, TX).

This study was supported by National Natural Science Foundation of China (No. 81301937).

45. Cao YF, Chen HC and Liu XF. Study on the relationship between the genetic polymorphisms of GSTM1 and GSTT1 genes lung cancer susceptibility in the population of Hunan province of China. Life Sci Res. 2004; 8:126–128.