Gastric carcinoma (GC) is one of the most common malignancies in the world [1–3]. Despite improvements in diagnosis and treatments was developed in recent years, the advanced gastric cancer is still one of the most lethal cancers due to lack of effective therapies. To improve survival rate, recent studies have focused on immunotherapies by targeting B7 homolog 1 (B7-H1) or programmed death 1 (PD-1) in multiple cancers treatment [4, 5].

B7-H1, a type I transmembrane surface glycoprotein, is found on several types of immune cells surface such as dendritic cells and macrophages, but also on surface of multiple solid tumors [6–9]. B7-H1 is a member of superfamily of immunoglobulin B7 and act as the ligand of PD-1, which is important in immunomodulation [10–12]. The interaction of B7-H1 with PD-1 induces suppression of T cell’s function and results in inhibition of immune response, which prevents tumor cells from being destructed by immune cells [13]. B7-H1/PD-1 mediated tumor cell immune escaping is important in cancer development and metastatic. Many studies have found that B7-H1 expression was associated with poor survival rate in cancer [14–17]. A promising treatment is blocking the immune checkpoint to augment endogenous antitumor immunity. Antibodies specified to PD-1/B7-H1 immune checkpoint were designed to restore endogenous anti-tumor response. Currently, it is reported that anti-PD-1 treatment profoundly improved the prognosis in certain lung cancer and metastatic melanoma [5]. Also, the efficacy of blocking PD-1 or B7-H1 in other cancer type, including gastrointestinal carcinoma, is in evaluation.

MicroRNAs are a type of endogenous small noncoding RNA ranging 20 to 25 nucleotides, which induces translational inhibition or degradation of targets by binding with specify sequence located at 3′-UTR (untranslated region) of mRNA [18]. Increasing studies have shown that microRNAs was involved in proliferation, apoptosis and immune response by targeting oncogenes and tumor suppressor genes [19, 20]. There were evidences that miR-152 was associated with gastrointestinal cancer. Song et al. found that miR-152 inhibited gastric cancer cells proliferation by targeting cholecystokinin-B receptor [21]. Zhai et al. reported miR-152 suppresses gastric cancer cell proliferation via targeting CD151 [22]. MiR-152 was reported down regulated in gastric cancer tissues compared to matched normal tissues and low expression of miR-152 was correlated with increased tumor sizes and stage [23]. Therefore, low expression of miR-152 is involved in carcinogenesis in gastric cancer. However, the underlying mechanism was still not fully investigated. 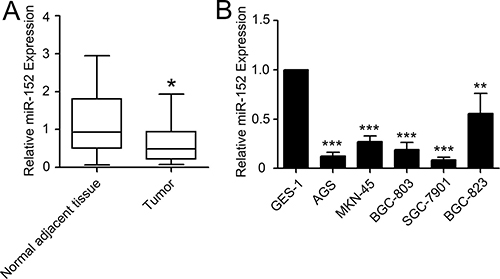 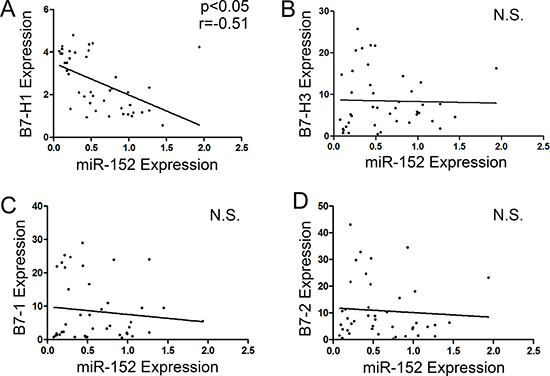 As expression of B7-H1 was negatively correlated with miR-152 levels in gastric cancer. Next, we tried to explore whether B7-H1 is potential target of miR-152. We used bioinformatics algorithm (www.targetscan.org) to screen target genes of miR-152 and found B7-H1 is putative target of miR-152. According to this rationale, B7-H1 was chosen for next analyses. As shown in Figure 3A and 3B, transfection of miR-152 mimic significantly reduced B7-H1 mRNA levels in SGC-7901 and AGS cell lines. Interferon-γ (IFN-γ) (20 ng/ml) was added 48h after transfection. Another 24 hours later, cells were collected and analyzed. Consistent with above result, the western blot and Flow Cytometry results showed that protein level of B7-H1 also markedly reduced after transfection with miR-152 mimic. 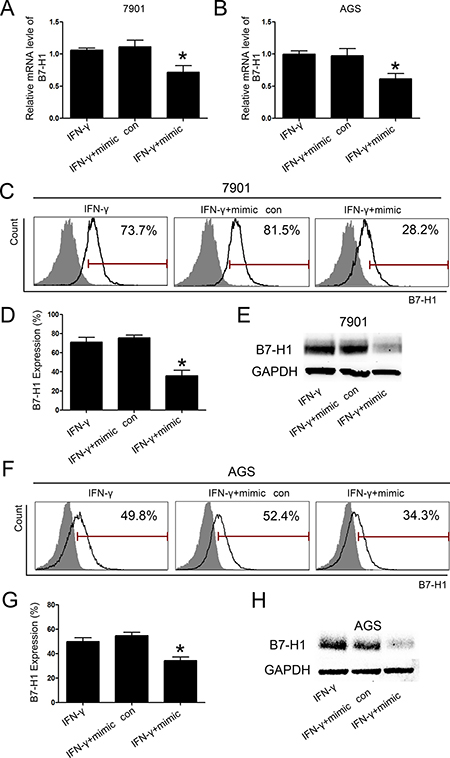 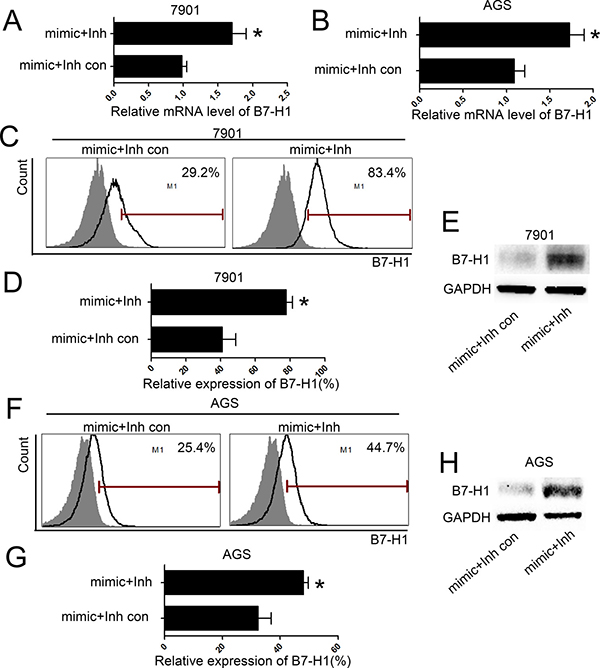 To confirm whether B7-H1 is a direct target of miR-152 in GC cells, the luciferase report assay was performed. We co-transfected SGC-7901 with miR-152 and a reporter vector encoding luciferase which is fused with 3′-UTR of B7-H1 gene (Luc-B7-H1 vector). As shown in Figure 5, luciferase activity was significantly inhibited when cells were transfected with miR-152 mimic and Luc-B7-H1 vector. However, co-transfection with miR-152 mimic scramble control and Luc-B7-H1 vector or empty vector showed no significant effect to luciferase activity. Moreover, mutation of predicted binding site of 3′-UTR of B7-H1 marked rescued activity of luciferase. Therefore, we confirmed that miR-152 could bind directly to B7-H1 3′-UTR region and inhibit B7-H1 expression. 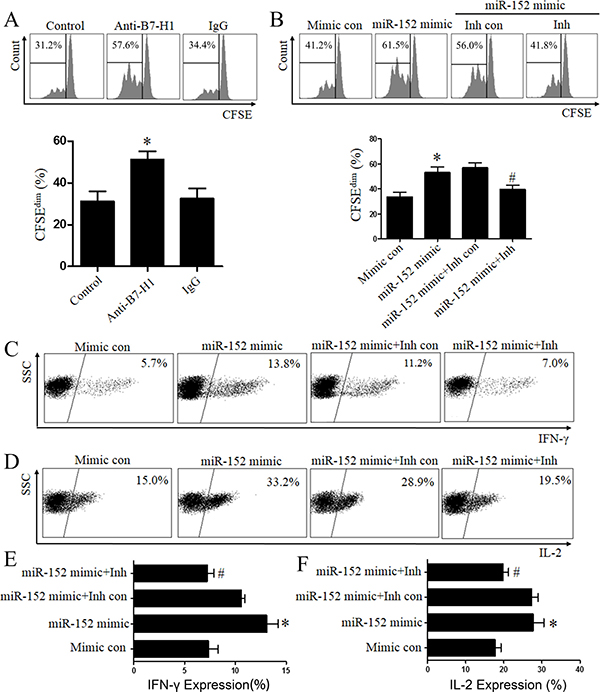 Previous studies have demonstrated that miR-152 acts as a tumor suppressor [21, 22, 24, 25]. However, the involvement of miR-152 in tumor immune is still poorly understood. Our finding from present study defined a new role for miR-152 and suggested that miR-152 specifically activates immune response via targeting B7-H1. In the present study, lower miR-152 level was significantly related to clinicopatholgic parameters such as increasing tumor size, advanced pT stage and higher lymph node metastasis rate (Table 1). It is widely accepted that tumor size, pT stage and lymph node metastasis rate are pivotal prognostic factors in gastric cancer patients. We found that there was a significant inverse correlation between miR-152 and B7-H1 expression in gastric cancer samples (Figure 2). Hence we speculated that miR-152 might be associated with expression of B7-H1 in gastric cancer.

MiRNA-152 mimic and inhibitor were used to explore the specific interaction between miR-152 and B7-H1. Here we found that transfection of miR-152 mimic reduced B7-H1 expression in SGC-7901 and AGS gastric cell lines (Figure 3). These finding suggested that miR-152 inhibited B7-H1 expression. Moreover, we co-transfected gastric cancer cell lines with specified miR-152 inhibitor and mimic and found that could restore expression of B7-H1 in gastric cancer cell lines (Figure 4), which indicated miR-152 can specifically inhibit expression of B7-H1. Furthermore, dual-luciferase reporter assay demonstrated that miR-152 can directly bind with 3′-UTR of B7-H1. Collectively, all these data indicated that expression of B7-H1 is inhibited by miR-152 and thus loss miR-152 may result in development of cancer

T cells is important in immunologic surveillance and loss of function of T cells may lead to tumor immune escaping [26]. Many studies suggested that activation of B7-H1/PD-1 signaling induced T cells exhaustion, a process broadly described as dysfunction and deletion of specified T cells. T cells exhaustion is accompanied with decreasing production of several cytokines such as IFN-γ and IL-2 [27]. Consequently, blockade B7-H1/PD-1 pathway restored function of T cells in several types of tumor and showed anti-tumor response by modulating tumor microenvironment [4, 13]. In present study, transfection of miR-152 can significantly restore proliferation of T cells, suggesting that miR-152 have a direct effect on immune response by decreasing expression of B7-H1, which can be explored therapeutically (Figure 6). In accordance with the recovery of proliferation, the production of cytokines including IFN-γ and interleukin-2 were increased by transfection of miR-152 mimic (Figure 6). From our results, we revealed new function of miR-152 and displayed that miR-152 can reactivate T cells response in vitro. Therefore, the miR-152 may have therapeutic potential to increase immune response, as well as to inhibit growth of tumor in gastric cancer.

It is likely that further research into microRNA-152 might shed the light on the development of drug and therapeutic strategies for treatment of gastric cancer. However, a limitation for this study is the fact that an investigation of correlation between miR-152 expression and patients’ survival is needed. And the influence to immune response in vivo should be further investigated.

In conclusion, our study provided data that miR-152 was significantly decreased in gastric cancer tissues and cell lines. Lower miR-152 is associated with poor stage, increasing tumor size and higher positive lymph node metastasis. MiR-152 could bind with 3′-UTR of B7-H1 and inhibited its expression. Subsequently, enforced miR-152 expression enhanced T cells proliferation and function via targeting immune checkpoint molecular B7-H1. Our results therefore suggests miR-152 is a potential prognostic and therapeutic marker for gastric cancer and identify a novel mechanism by which tumor immune response is regulated by miR-152 via B7-H1.

All human gastric cancer tissue and corresponding adjacent normal tissue were obtained from 42 patients who underwent a surgical resection without preoperative treatment at Union hospital of Huazhong University of Science and Technology, after receiving adequate informed consent. Fresh samples were preserved by snap-frozen in liquid nitrogen immediately after resection and then stored in –80°C. The present study was approved by the Research Ethics Committee of Huazhong University of Science and Technology.

Cells were collected and lysed using Radio Immunoprecipitation Assay (Beyotime Biotechnology Company, China) with proteinase inhibitor according to manufacturer’s protocol. Briefly, the lysate was centrifuged at 12000 g for 15min at 4°C. Then supernatant was collected and protein concentration was measured using BCA Protein Assay Kit (Beyotime Biotechnology Company, China). 20 ug protein of each sample was separated in 10% polyacrylamide sodium dodecyl sulfate gels. Then protein was transferred to to polyvinylidene fluoride membrane and blocked with 5% fat-free milk for 3 hours with Tris-buffered saline Tween-20 (TBST) (Beyotime, Beijing, China) at room temperature. The membranes were incubated with antibodies against B7-H1 (1:1000, Cell Signaling Technology, USA), GAPDH (1:3000, 6C5, Abcam, USA) overnight at 4°C and washed 3 times (10 minutes per time) after incubation. After that, The membranes were processed in secondary antibodies conjugated with horseradish peroxidase (HRP) for 1–2 hours at dilution of 1:4000. After washing as previously, the protein was detected using an ECL Kit (Beyotime Biotechnology Company, China) and images were captured by the UVP imaging system. B7-H1 expression was normalized to endogenous reference GAPDH.

All data were showed as means ± standard error of the mean (SEM). The relationship between the expression of miR-152 and clinicopathologic features was analyzed by χ2 tests. Pearson’s coefficient correlation was applied for analyzing associations between levels of miR-152 and mRNA levels of B7-H1, B7-1, B7-2 and B7-H3. The miR-152 expression level in cancer tissues and its mormal control were analyzed by Student’s t-test. Statistical analysis was performed by one-way analysis of variance (ANOVA) plus Student-Newman-Keuls post hoc analysis. Statistical analyses were done using the SPSS software version 17.0 (SPSS Inc, Chicago, IL). P value less than 0.05 was considered statistically significance.