Condensed abstract: The aim of this study was to analyze the role of FOXO6 in patients with gastric carcinoma. FOXO6 may play an important role on tumor invasion, metastasis and prognosis. It may also serve as a novel target for prognostic prediction.

Gastric cancer is of great threat to human worldwide due to its high incidence and mortality among cancers [1-4]. The incidence of gastric cancer in China and some East Asia countries is much higher than that in America or Europe countries [5, 6]. Surgery is the preferred method for the treatment of gastric cancer. Meanwhile, platinum-based adjuvant chemotherapy after surgery has been widely accepted as a standard treatment for several decades. However, due to atypical symptoms at the early stage, over 80% of patients with gastric cancer were diagnosed at an advanced stage, which usually indicates a poor prognosis [7]. Moreover, chemotherapy has limited efficacy in both resectable and unresectable gastric cancer cases [8, 9]. Different kinds of biomarkers are found which are correlated with different types of cancer [10]. Therefore, new molecular markers, which are pivotal to tumor biology, to prediction of the prognosis and adjuvant treatment regimens, are urgently needed [11–14].

Forkhead box (FOXO) gene family is evolutionarily conserved in the human genome with a similar sequence among its members and most of its mediated reactions are related to the insulin/PI3K/AKT signaling pathway [15]. The presently found FOXO gene families in mammal include FOXO1, FOXO3, FOXO4 and FOXO6. It has been reported that FOXO6 played an important role in oxidative stress of cell proliferation [16, 17]. Moreover, previous datas revealed that the FOXO6 could regulate the synaptic function and hepatic glucose homeostasis in mice [18, 19], and promote oncogenicity of gastric cancer via upregulation of C-myc signal pathway [20]. However, the prognosis of FOXO6 gene in gastric cancer remains unknown. Therefore, the purpose of this study is to investigate the correlation of FOXO6 expression with clinicopathological features and prognosis in gastric cancer.

To verify the functions of FOXO6 in gastric cancer, we correlated FOXO6 expression with other widely recognized clinicopathologic features (Table 1). Overexpression of FOXO6 was positively related to depth of invasion, lymph node metastasis and stage of disease in gastric cancer (all P < 0.001) (Table 1).

Overexpression of FOXO6 correlated with poor prognosis in gastric cancer

Moreover, to confirm the value of FOXO6 expression on survival (OS and RFS) in patients with gastric cancer, we analyzed the correlation between clinicopathologic parameters and patients outcomes by univariate analysis. The results revealed that tumor size, depth of invasion, lymph node metastasis and FOXO6 status (all P < 0.05) were independent factors that affected OS. While larger tumor size, upper tumor site, prominent serosal invasion, lymph node metastasis and FOXO6 overexpression (all P < 0.05) were unfavourable predictors for RFS (Table 2). In addition, FOXO6 expression and the prognostic parameters found by univariate analysis were entered into a multivariate model to identify the independent predictors of OS and RFS. Our data revealed that FOXO6 overexpression was a negatively independent predictor for OS in patients with gastric cancer (HR = 3.275, 95% CI: 2.201-4.873; P < 0.001). Furthermore, the patients with FOXO6 overexpression were more likely to suffer from recurrence than that with low FOXO6 expression (HR = 3.077, 95% CI: 2.089-4.532; P < 0.001) (Table 2).

Table 2: Univariate and multivariate analysis of FOXO6 associated with survival and recurrence in gastric cancer patients

*TNM stage was combined with depth of invasion and lymph node metastasis; we did not enter the TNM stage into multiple analysis with these indexes to avoid any bias in analysis.

The prognosis analysis showed that the patients with FOXO6 overexpression had poorer OS and RFS than that with low FOXO6 expression (both P < 0.001) (Figure 2a). The median times of OS and RFS were 25.5 months and 19.5 months in all the gastric cancer patients. Moreover, the median times of OS and RFS in FOXO6 over-expression (n = 98) gastric cancer patients were 15.0 months and 9.5 months, which were significantly shorter than those with FOXO6 low-expression (n = 94) (36.0 months and 39.0 months). In addition, the 5-year OS and RFS rates of the FOXO6 highly expression were significantly lower (9.6% and 11.6%), compared with that of FOXO6 low-expression (56.2% and 49.3%) (Figure 2a). Furthermore, in order to assess the significance of FOXO6 in prognosis, all the patients were divided into different subgroups basing on tumor size, depth of invasion, and lymph node metastasis (Figure 2b-2g). Our results showed that FOXO6 overexpression could keep its prognostic value in predicting poorer survival (OS and RFS) in different subgroups (all P < 0.05). Therefore, it suggests that FOXO6 could be a potential prognostic biomarker for different risk of gastric cancer patients. 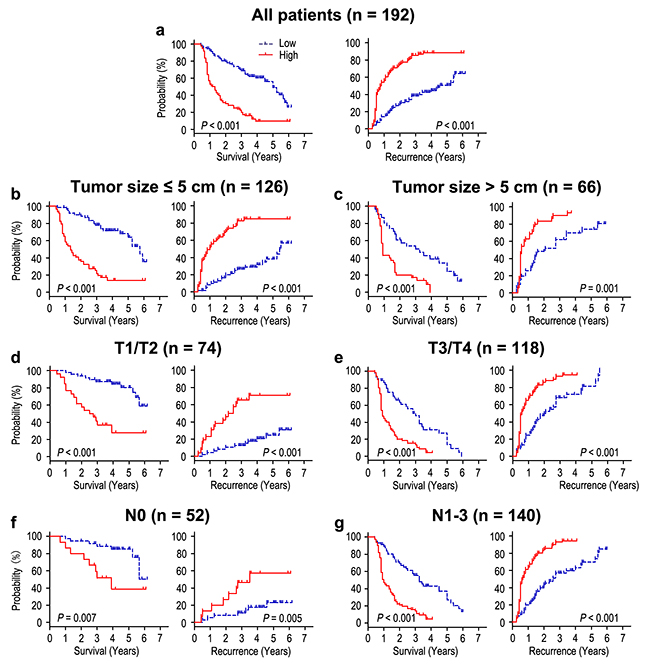 Figure 2: Overall survival and Recurrence-free survival are shown for gastric cancer patients. All patients were stratified according to tumor size, depth of invasion and lymph node metastasis. Kaplan-Meier survival estimates and log-rank tests were used to analyze the prognosis of FOXO6 expression in all patients a. and each subgroup b-g.

Moreover, we evaluated the effect of invasiveness on the prognosis of FOXO6 expression in the way of taking MMP-9 as a marker for invasive potential of cancer cells. The patients of gastric cancer were stratified either minimal-invasive group (MMP-9 low-expression; n = 94) or highly invasive group (MMP-9 over-expression; n = 98) according to the expression of MMP-9 potein. The correlation of FOXO6 expression and survival was analyzed by Kaplan-Meier survival curves in different invasive potential of patients. In the minimal-invasive group, the patients with FOXO6 overexpression were related to poorer OS (P < 0.001) and shorter RFS (P < 0.001), compared with those with FOXO6 low-expression (Figure 5a). In the highly invasive group, patients with FOXO6 overexpression were prone to death and tumor relapse (both P < 0.001) (Figure 5b). Therefore, FOXO6 could be a potential prognostic indicator for gastric cancer patients that independent of tumor invasion. 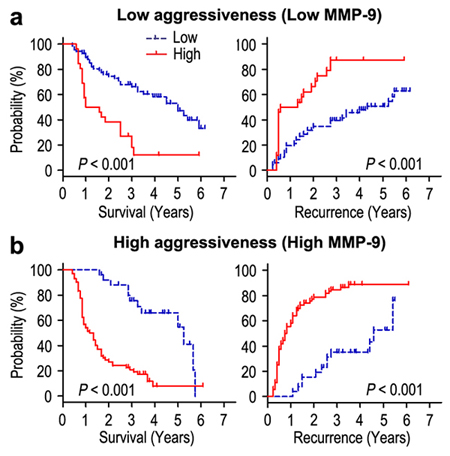 Figure 6: FOXO6 overexpression indicates poor prognosis in TNM stage I gastric cancer patients. Overall survival a. and Recurrence-free survival b. curves were generated based on the FOXO6 protein expression statuses in 48 TNM stage I patients.

Table 3: Univariate and multivariate analysis of FOXO6 associated with survival and recurrence in TNM I gastric cancer patients

Extracellular matrix (ECM) degradation is a signal for the beginning of tumor cells invasion and metastasis, and matrix metalloproteases (MMPs) are important molecules involved in degradation of ECM during tumor cells invasion and metastasis [24]. It has been reported that MMP-9 regulate the bioavailability of growth factors and disrupt cell-cell contacts, which could affect cell proliferation and survival [25]. Chu et al. [26] showed that overexpression of MMP-9 was positively correlated with depth of invasion and lymph node metastasis in gastric cancer, and the survival time of patients with MMP-9 overexpression was shorter than that with MMP-9 low-expression. Furthermore, Zhao et al. [27] reported that knockdown of MMP-9 expression could suppress tumor cell growth and invasion of SGC7901 gastric cancer cell in vitro and in vivo. Our datas found that FOXO6 was positively associated with the expression of MMP-9 in gastric cancer. In addition, FOXO6 overexpression was an important factor of poor prognosis in gastric cancer patients that independent of tumor invasion. In general, FOXO6 overexpression promoting tumor progression indicates that FOXO6 could serve as a potential target in cancer therapy.

The TNM stage is one of the most important factors that affecting the prognosis of gastric cancer patients. However, it is difficult for gastrointestinal surgeon to predict opportunely who would suffer relapse in early-stage patients that have already received radical resection. Many molecular markers have been reported and shown to have potential predictive significance. However, biomarkers which could screen TNM stage I patients with radical resection are still limited. Our results revealed that FOXO6 expression had prognostic significance for OS and RFS in TNM stage I patients. In multivariate analysis, our data reported that FOXO6 was an independent negative prognostic biomarker in TNM stage I patients. These results suggest that FOXO6 expression may serve as a predictive biomarker to identify patients with TNM stage I at high risk of relapse.

The informed consents were provided and experiment was approved by the Institutional Review Board and Human Ethics Committee of Affiliated Cancer Hospital & Institute of Guangzhou Medical University. Informed consents were obtained from all subjects. All methods were performed in accordance with the relevant guidelines and regulations.

All the gastric cancer samples and adjacent non-tumorous gastric tissues were obtained from 192 patients who had received curative resection of gastric cancer between January 2006 and October 2008 at the pathology department, the Affiliated Cancer Hospital & Institute of Guangzhou Medical University (Guangzhou, China). Patient diagnosis was established pathologically, and none of the patients had received chemotherapy or radiotherapy prior to surgery. The cases were selected consecutively on the basis of availability of resection tissues and follow-up data. Relevant clinical pathologic features were all obtained from the patients’ files (Supplementary Table 1). Tumor stage was classified according to the 7th Union International Cancer Control (UICC) TNM staging system [28]. Overall survival (OS) was computed from the date of surgery to the date of death or last follow-up. Recurrence free survival (RFS) was defined as from the date of surgery to the date of relapse, metastasis, or last follow-up.

A total of 192 gastric cancer tissues and their adjacent non-tumorous tissues were detected by immunohistochemistry (IHC). Formalin-fixed, paraffin-embedded specimens from consenting patients were cut in 4 μm sections. After being baked at 55 °C for 1.5 h, the samples were deparaffinized in xylene and rehydrated using a series of graded alcohols. And then, the tissue slides were treated with 3% hydrogen peroxide in methanol for 10 min to exhaust endogenous peroxidase activity, and the antigens were retrieved in 0.01 M sodium citrate buffer (pH 6.0) using microwave oven, and then preincubated in 10% normal goat serum for 30 min to prevent nonspecific staining. The samples were incubated overnight using a primary antibody, either FOXO6 (Proteintech Group, #19122-1-AP, USA, dilution 1:200) or anti-MMP-9 (Abcam, #ab38898, UK, dilution 1:200), in a humidified container at 4 °C. The tissue slides were treated with a non-biotin horseradish-peroxidase detection system according to the manufacturer’s instructions (Gene Tech). Assessments of the staining were scores by two experienced pathologists blinded to the patients’ identity and clinical status. In discrepant cases, a pathologist reviewed the cases and reached the consensus.

The follow-up deadline was 30 October 2015. In all the gastric cancer patients (70 females and 122 males), the median follow-up period was 25.5 months, ranging from 5 to 74 months. Patients had follow-up appointments every 1-3 months in the first 3 years, and every 6 months for the next 2 years, and yearly thereafter. Recurrence were confirmed by tumor markers levels including CEA, AFP, CA199, CA125 and CA724, B-type ultrasonic inspection every 3 moths, and computed tomography (CT) or magnetic resonance imaging (MRI) every 6 months after gastrectomy. The main causes of death were gastric cancer recurrence.

All statistical analyses were carried out using SPSS software (version 16.0; Chicago, IL, USA). The chi-square test was used to analyze the correlation of FOXO6 expression with clinical data. The Student’s t-test was used for comparisons. Correlation of FOXO6 with MMP-9 staining scores was calculated by Pearson χ2 test. Survival curves were generated using the Kaplan-Meier method, and differences between curves were estimated by the log-rank test. The Cox multivariate proportional hazards regression model was used to determine the independent factors that influence prognosis based on the investigated variables. All reported P values were two-sided and P < 0.05 was considered statistically significant.

JHW, SZC, JW participated in the study conception, design, case selection and experiments. JHW, HST and XSL performed the data analysis and writing of the manuscript. XLZ, LSZ, QR and YHH carried out the data collection. JHW, XZY, XSL and GJL performed the scoring of immunohistochemical staining. All the authors read and approved the final manuscript.

The authors declare that there are no conflicts of interest or financial disclosures.