Activated platelets are involved in cancer development and progression. Mean platelet volume (MPV) and platelet distribution width (PDW) are early indexes of platelet activation. The objectives of this study were to investigate the ability of MPV, PDW and carcinoembryonic antigen (CEA) individually or in combination, to distinguish between gastric cancer and gastric ulcer. The study involved 194 patients with gastric cancer, 191 patients with gastric ulcer, and 185 control subjects. Subjects’ characteristics and hematologic tests data at initial diagnosis were collected. We found that MPV levels are significantly increased and PDW levels are significantly reduced in patients with gastric ulcer and in control subjects compared with those in gastric cancer. When the area under the curve (AUC) was used to analyze control subjects versus gastric cancer, the combination of PDW and CEA exhibited a significantly larger AUC of 0.939 (0.910-0.961) compared with the combination of MPV and CEA (p = 0.0045). When AUC was used to analyze gastric ulcer versus gastric cancer, PDW alone had the high specificity (98.5%) and high sensitivity (97.4%). In conclusion, combined use of MPV, PDW and CEA can accurately distinguish gastric cancer from gastric ulcer and controls. Further studies in larger samples are warranted.

Therefore, the objective of this study was to investigate the ability of MPV, PDW and CEA individually or in combination, to distinguish between gastric cancer and gastric ulcer.

The characteristics of the patients with gastric cancer and gastric ulcer and control subjects are demonstrated in Table 1. One-way ANOVA analysis indicated a significant group difference in CEA, platelet count, MPV, PDW, and haemoglobin levels. However, there are no markedly difference in age, BMI, white blood cell, and the percentage of male and current smokers among three groups.

Table 1: Clinical and laboratory characteristics of the participants. 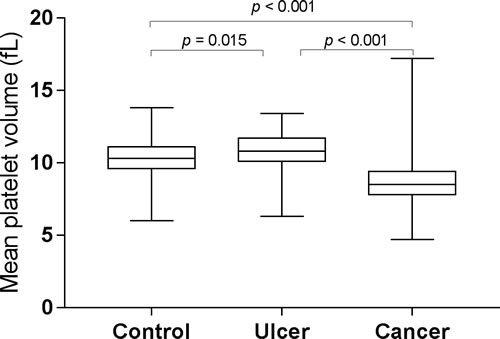 Table 2: Correlations between clinicopathological features and pre-operative MPV and PDW in gastric cancer. 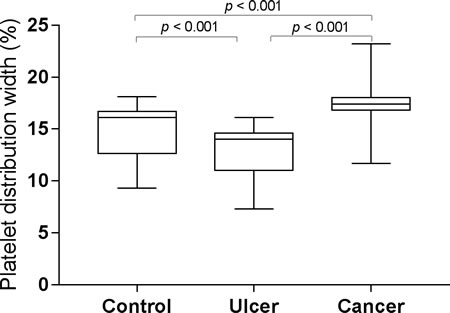 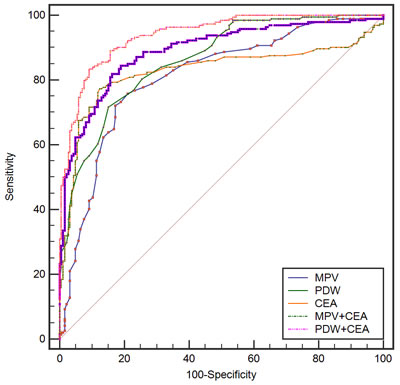 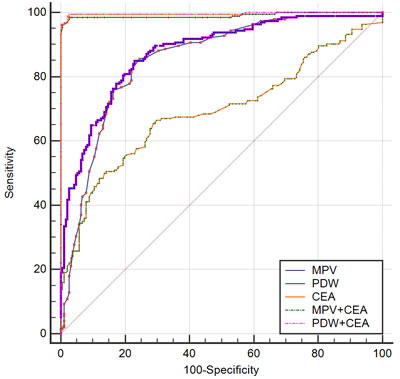 Accumulating evidence revealed that platelet activation during cancer promotes disease progression. Several clinical studies have found the changed biomarkers of platelet activation, such as soluble P-selectin, CD40 ligand, and β-thromboglobulin in cancer [10-12]. Further study demonstrated that tumors could promote platelet production and activation by interleukin (IL)-6 pathway [13]. Consistent to previous findings, our study indirectly confirmed the results using a simple indicator of platelet activation. These data are also in line with the current knowledge that anti-platelet is considered to be a part of cancer adjuvant therapy [14].

The reasons for changes of MPV and PDW in gastric ulcer and gastric cancer are unclear. Bone marrow cells (including megakaryocytes) dys-regulation plays a key role. Platelet volume is determined both during megakaryopoiesis and during thrombopoiesis. Megakaryocytic maturation, platelet production and platelet size could be regulated by cytokines, such as IL-6, granulocytes colony stimulating factor (G-CSF) and macrophage colony stimulating factor (M-CSF) [15]. Considerable evidence suggests that IL-6 promotes tumorigenesis by regulating apoptosis, survival, angiogenesis, metastasis and metabolism [16]. In addition, megakaryopoiesis and subsequent thrombopoiesis in cancer may be stimulated by G-CSF and M-CSF, which could be secreted by tumor cells [17].

MPV was an early index of activated platelets. Increased MPV in gastric ulcer may be due to enhanced chronic inflammation and reduced MPV in gastric cancer was regarded as an increased consumption of large platelets [18]. Furthermore, MPV was positively associated with levels of thrombopoietin and IL-6, cytokines that regulate megakaryocyte ploidy [19, 20]. A report observed that MPV levels were increased in patients with gastric cancer compared with those in control subjects [21]. The result was not consistent to our findings. The discrepancies may be attributed to different sample sizes, dissimilar populations, and the variability of measurement methods. PDW is a measure of platelet heterogeneity. The heterogeneity in platelet volume is caused by heterogeneous demarcation of megakaryocytes [22]. However, the exact mechanism of changed PDW in gastric cancer still needs to be elucidated.

Compared to MPV, PDW or CEA alone, we found that PDW combined with CEA had high sensitivity and specificity. Therefore, it is helpful for early detection and early diagnosis of gastric cancer in asymptomatic patients or in patients with gastric ulcer.

Some limitations of the present study must be mentioned. First, the study was conducted in a single center. Second, a mechanistic explanation for our results is not provided by our data and further study is needed. Third, because the study includes only Chinese participants, the results cannot be generalized.

In conclusion, combined use of MPV, PDW and CEA can accurately distinguish gastric cancer from gastric ulcer and controls.

The study involved 194 patients with gastric cancer (mean age 54.7 ± 9.7 years, range 28-77 years), 191 subjects with gastric ulcer (mean age 54.9 ± 5.2 years, range 35-71 years), and 185 control subjects (mean age 56.6 ± 3.7 years, range 50-72 years) from January 2014 to June 2014. The patients were recruited from clinic in the Third Affiliated Hospital and the control subjects were recruited from the check-up center in the Second Affiliated Hospital, Harbin Medical University. Control subjects were matched for age, gender, body mass index (BMI), and smoking status. Patients meeting all of the following requirements were included: (1) undergone complete surgical resection and diagnosis of gastric cancer was confirmed by histology; (2) untreated before diagnosis; (3) measurement of CEA before surgery. To be eligible, participants must not have reported any of the following: gastroduodenal diseases, hematological disorders, autoimmune diseases, systemic inflammatory diseases, coronary artery disease, hypertension, diabetes mellitus, thyroid disease, renal disease, hepatic disorder and other cancer, and medical treatment with anticoagulant, statins, and acetylic salicylic acid. Subjects gave written informed consent before the beginning of the study. The patients with gastric ulcer underwent upper digestive endoscopy with gastric biopsy. Tumors were classified according to the 7th edition of the AJCC/TNM tumor staging. The study protocol was approved by the Institutional Review Board of the Second and the Third Affiliated Hospital of Harbin Medical University.

All subjects completed a health-related questionnaire and underwent a detailed physical examination. Recorded information included smoking status, medical history and medication use for each subject. BMI was defined as weight divided by height in meters squared. A venous blood sample was collected from each participant under fasting conditions. The serum carcinoembryonic antigen (CEA) was assayed using an automatic electrochemistry luminescence immunoassay system (ROCHE cobas 8000; Roche, Germany). White blood cell (WBC), haemoglobin, and platelet indices were measured by an autoanalyzer (Sysmex XE-2100, Kobe, Japan). The whole blood samples were collected in EDTA-containing tubes, and all samples were processed within 30 minutes after blood collection. The inter- and intra-assays coefficients of variation (CVs) of all these assays were below 5%.