Previous studies have shown that mammalian cardiac tissue has a regenerative capacity. Remarkably, neonatal mice can regenerate their cardiac tissue for up to 6 days after birth, but this capacity is lost by day 7. In this study, we aimed to explore the expression pattern of long noncoding RNA (lncRNA) during this period and examine the mechanisms underlying this process. We found that 685 lncRNAs and 1833 mRNAs were differentially expressed at P1 and P7 by the next-generation high-throughput RNA sequencing. The coding genes associated with differentially expressed lncRNAs were mainly involved in metabolic processes and cell proliferation, and also were potentially associated with several key regeneration signalling pathways, including PI3K-Akt, MAPK, Hippo and Wnt. In addition, we identified some correlated targets of highly-dysregulated lncRNAs such as Igfbp3, Trnp1, Itgb6, and Pim3 by the coding-noncoding gene co-expression network. These data may offer a reference resource for further investigation about the mechanisms by which lncRNAs regulate cardiac regeneration.

In recent years, the traditional view that the heart is a terminally differentiated organ with no capacity for cardiomyocyte renewal has been emphatically refuted by an increasing number of studies in humans and other mammals [1–3]. Several studies have found that 1-day-old neonatal mice were capable of undergoing cardiac regeneration following multiple types of cardiac injury, but the ability to efficiently regenerate heart muscle was lost by postnatal day 7 [4–6]. Further study by our group examined the global gene expression patterns of the neonatal mouse heart at key time points (1 and 7 days old) [7] and found several differentially expressed genes involved in transient regeneration of the neonatal mouse heart. However, there is limited original data regarding cardiac regeneration during this developmental period.

Long noncoding RNAs (lncRNAs) are defined as transcripts greater than 200 nt without a known protein-coding function [8]. There is increasing evidence that lncRNAs can regulate gene expression at the epigenetic, transcription, and post-transcription levels and participate in a range of biological processes [9]. A recent study showed that many lncRNAs are expressed in the heart and confirmed the essential role of lncRNAs in the cardiovascular system such as modulating cardiac development [10]. Further studies have shown that lncRNAs are involved in coronary artery disease [11] and myocardial hypertrophy [12]. In addition, some lncRNAs have been found to be involved in cardiac regeneration. For example, lncRNA-ST8SIA3 (also named lncRNA ROR, regulator of reprogramming) enhances the reprogramming of fibroblasts to become induced pluripotent stem cells or cardiomyocytes [13]. Knocking out the gene lncRNA-H19 has been shown to promote differentiation of parthenogenetic embryonic stem cells to cardiomyocytes with strong heart-like beating [14]. However, our understanding of the role of lncRNAs in regeneration of heart tissue in mice is still limited. Therefore, two key time points (1 and 7 days old) were selected for the analysis of global lncRNA expression profiles in C57BL/6 mice using next-generation high-throughput RNA sequencing techniques.

Profiles of the differently expressed lncRNAs and mRNAs 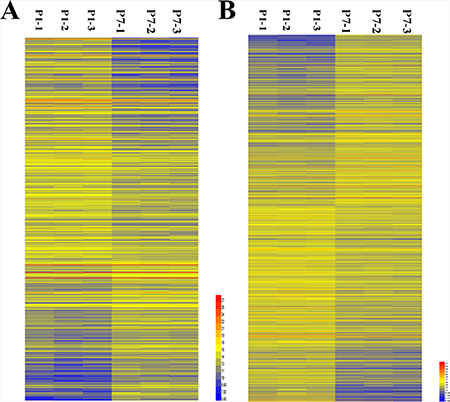 From the analysis of sequencing data, 1833 differentially expressed mRNAs were found with comparisons between 1-day-old and 7-day-old cardiac tissue, among which 859 were upregulated mRNAs and 974 were downregulated mRNAs in 7-day-old cardiac tissue compared with tissue from 1-day-old mice. Their distinct expression patterns are also presented in the hierarchical clustering analysis shown in Figure 1B.

Length of the lncRNAs was generally between 400 bp and 3600 bp (Figure 2A, 2B). Chromosomal distribution showed the numbers of up- and downregulated lncRNAs located on different chromosomes (Figure 2C, 2D). Chromosomal distribution showed the upregulated lncRNAs were mainly located on chromosome 14, 1 and 6, and the downregulated lncRNAs were mainly located on chromosome 17, 9 ,6 and 7.The functional characterisation of these lncRNAs presents a formidable task, and some studies suggest that lncRNAs regulate higher-order chromosomal dynamics, sub-cellular structural organisation and telomere biology [19]. LncRNAs have been suggested to originate from complex loci that include lncRNA and associated protein-coding genes, since several lncRNAs have been reported to regulate the expression of adjacent protein-coding genes [20, 21]. Such information about these lncRNAs and their nearby coding genes might be useful to predict their functional roles in heart regeneration (Table 1). 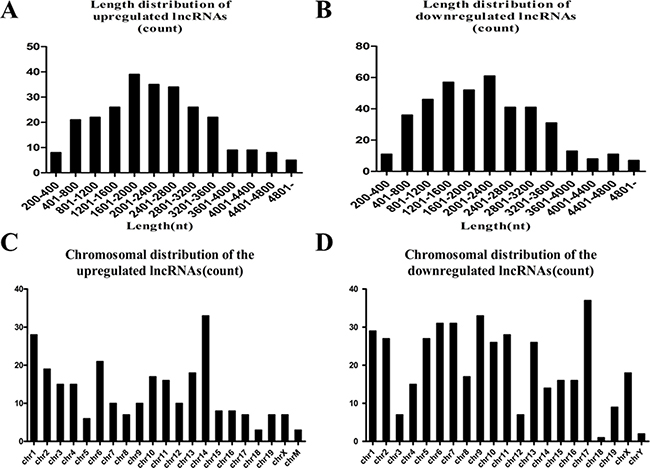 Table 1: lncRNAs and their nearby coding genes 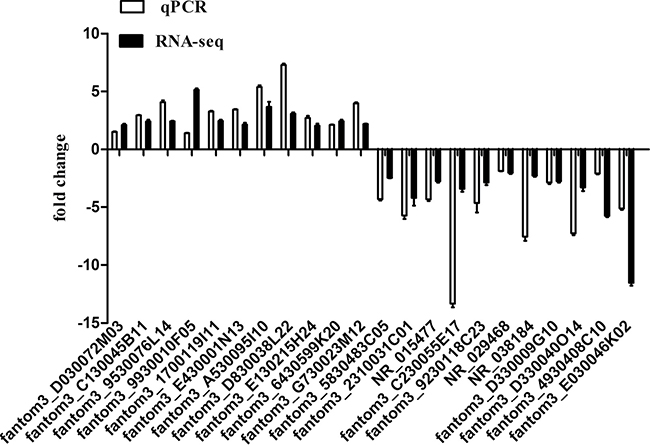 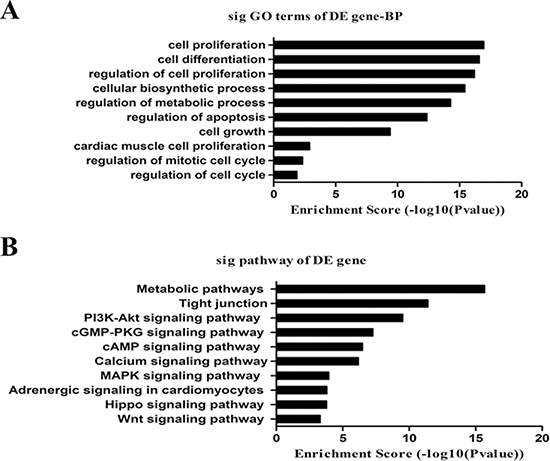 Biological networks cover modules of genes or proteins that may function in the same pathway; genes or proteins inside the same module can be co-regulated [22]. Therefore, construction of a CNC network could infer the biological functions of lncRNAs [22, 23], which would increase our understanding of the complex molecular mechanisms of heart regeneration.

Although various miRNAs [24], transcription factors [25], growth factors [26], and cell cycle regulatory elements [27, 28] have been shown to regulate the genes that orchestrate proliferation during the regeneration of cardiomyocytes, the role of lncRNAs is poorly understood. Compared with adult mammals, neonatal mice have full capacity for cardiac regeneration after injury. Therefore, charting the transcriptional profile of lncRNAs in regenerative hearts from neonatal mice is a key step in understanding the role of lncRNAs, and this study was the first to examine the expression of lncRNAs in regenerative hearts.

Pathway-Express analysis identified that the metabolic pathways were most significantly affected by the coding genes associated with differentially expressed lncRNAs in 7-day-old cardiac tissue compared with tissue from 1-day-old mice. Macromolecules including glycogen, proteins, nucleotides and lipids represent both the cellular energy reserve and also the essential building blocks for cell renewal [36]. Neonatal mice retain the capacity for cardiac regeneration, but this is lost after 7 days. Therefore, the demand for the anabolic production of macromolecules in the regenerating heart increases during the first 6 days after birth.

To study the biological functions and potential mechanisms of differentially expressed lncRNAs, we constructed a CNC network on the basis of the correlation analysis between the differentially expressed lncRNAs and mRNA. Compared with the conventional differential expression analysis, the co-expression network analysis indicates the higher-order relationships of the transcripts in the biological framework [43]. In our co-expression network, we observed that some lncRNAs expression levels were markedly correlated with the expression of several protein-coding genes, indicating the importance of their location. For instance, the lncRNA fantom3_B230352I09, which was downregulated in P7, was co-expressed with 17 coding genes, most of which were related to apoptosis, cell growth, regulation of the cell cycle and cell proliferation. As another example, the Trnp1 gene [44] has been reported to accelerate cell cycle progression and the Pim3 gene [45] has a cardio-protective effect through the process of anti-apoptosis. Igfbp3 is a downstream target of Wnt signaling pathway and participates in the regulation of adult cardiac progenitor cell regeneration [46].The lncRNA fantom3_2210409C20, upregulated in P7, was co-expressed with 8 coding genes. Among the co-expressed genes, Itgb6 (a β subunit of integrins) was found to be relatively close to fantom3_2210409C20. Integrins are expressed in all cellular compartments of the cardiovascular system and mediate cell adhesion, migration, proliferation and survival in many cell types [47]. Whether cardiac regeneration in 1-day-old neonatal mice is regulated by these lncRNAs warrants further study. Although our current understanding of lncRNA regulation in cardiac regeneration is in its infancy, several approaches can be employed to investigate their biological functions, including over-expression of lncRNA, lncRNA silencing and structure disruption, which may provide more conclusive evidence to explain the regulatory mechanisms.

In conclusion, we have shown the global different expression profiles of lncRNAs during the first seven days in the neonatal mouse heart. By bioinformatics prediction, we obtained some target genes of the candidate lncRNAs such as Igfbp3, Trnp1 Itgb6, and Pim3, which correlated with the process of proliferation. Collectively, our results suggest that lncRNAs could be important regulators in mammalian cardiac regeneration. Further work is needed to understand the biological functions and molecular mechanisms of specific lncRNAs implicated in cardiac regeneration.

The neonatal C57BL/6J mice were purchased from the Model Animal Research Centre of Nanjing University (Nanjing, China).Our study was approved by the Animal Care and Use Committee of Nanjing Medical University (Nanjing, China) and the methods were carried out in accordance with the approved guidelines. The left ventricular apex was removed from neonates 1 and 7 days after birth, cleaned and snap-frozen in liquid nitrogen. Three biological replicates were generated per timepoint. Hearts from five to ten mouse pups were pooled for each biological replicate.

RNA-Seq based transcriptome profiling was performed by the Guangzhou RiboBio Co, using the high-throughput, high-sensitivity HiSeq 3000 sequencing platform (Illumina Company, USA). Clean data were acquired by removing joint sequence fragments, low-quality segments and ribosomal RNA. The short reads were mapped to the reference genome using TopHat [15] with 2 mismatches (−−read-mismatches = 2) and 2 gaps (read-gap-length = 2). Transcripts were assembled and the relative abundance of genes was estimated using Cufflinks in reads per kilobase of transcript per million mapped reads (RPKM) [16]. Differentially expressed lncRNAs between P1 and P7 were identified through fold change as well as P values calculated with a t-test. The threshold set for dysregulated lncRNAs was a fold change of ≥ 1.0 and a P value of ≤ 0.05. A hierarchical clustering analysis was applied to classify lncRNAs based on their expression levels.

The results of RNA-Seq were validated via qPCR analysis. The cDNA was generated from 1 μg of total RNA using an AMV Reverse Transcriptase kit (Invitrogen Life Technologies). We designed primers for each lncRNA using Primer 3 (http://sourceforge.net/projects/primer3/) and used the Basic Local Alignment Search Tool from NCBI to verify that the amplified product was unique. The qPCR was performed using an ABI 7300 Sequence Detection system (Applied Biosystems, Foster City, CA, USA), under the following conditions: denaturation at 95°C for 10 min, and 40 cycles of 95°C for 15 sec and 60°C for 1 min. Relative gene expression levels were normalised to GAPDH and calculated according to the 2-ΔCT method. Each sample was measured in triplicate and reproduced at least three times. The sequences of the primers used are shown in Table 2.

Gene ontology (GO) analysis provides a controlled vocabulary to describe the molecular actions of gene products, their cellular locations and the biological processes in which those actions occur [17]. Fisher’s exact test was used to detect any significant overlap between the differentially expressed list and the GO annotation list. The P value denotes the significance of GO term enrichment between differentially expressed genes (a P value ≤ 0.05 is accepted as significant). Pathway analysis was used to map genes to KEGG pathways. The P value (calculated via EASE-score, Fisher P value or hypergeometric P value) denotes the significance of the pathway correlations (a P value of ≤ 0.05 is recommended, since the smaller the P value, the greater the significance of the pathway).

The coding-noncoding gene co-expression network (CNC network) was constructed based on the correlation analysis between the differentially expressed lncRNAs and mRNAs. The algorithm has been previously described [18]. Briefly, for each pair of genes analysed, we calculated the Pearson correlation coefficient (PCC) and correlation coefficient of the PCC between lncRNAs and coding genes (lncRNA-mRNA PCC and lncRNA-lncRNA PCC). We subsequently selected lncRNAs and mRNAs based on the PCC using the selection parameter PCC ≥ 0.99 as significant and created the co-expression networks using Cytoscape (Institute of Systems Biology, Seattle, US).

The data were analysed using the SPSS 17.0 software package (SPSS, Chicago, IL, USA). Differential expression levels of lncRNAs were compared by independent-samples t-test between two groups, and Fisher’s exact test was used in GO and pathway analysis. All values are expressed as the mean ± standard deviation from three independent experiments, and a P value of < 0.05 was considered statistically significant.

This study was supported by grants from the National Natural Science Foundation of China (No. 81370278 and No. 81570209) and Nanjing Medical Science and Technique Development Foundation (Ykk15148).

20. Martianov I, Ramadass A, Serra Barros A, Chow N, Akoulitchev A. Repression of the human dihydrofolate reductase gene by a non-coding interfering transcript. Nature. 2007; 445:666–670.