Ovarian cancer is one of the most common and lethal cancers affecting women globally [1]. After primary debulking or staging surgery, and subsequent platinum-based chemotherapy, most patients relapse within a median of 16 months [2]. Patients with recurrent ovarian cancer are usually offered several consecutive therapies with variable response rates and prognoses [2]. Effective clinicopathological biomarkers to identify the most appropriate alternative therapy for a given patient are urgently needed.

Hormone receptor discordance rates were as follows: ER 34.9%, PR 12.4%, AR 41.7%, FSHR 46.6%, LHR 50.5%, and GnRHR 20.0% (Table 3). Quantitative hormone receptor change was calculated as quantitative expression in the recurrent specimen minus that in the primary specimen in each case (Figure 1). PR expression remained relatively unchanged, while other hormone receptor levels fluctuated throughout tumor progression. 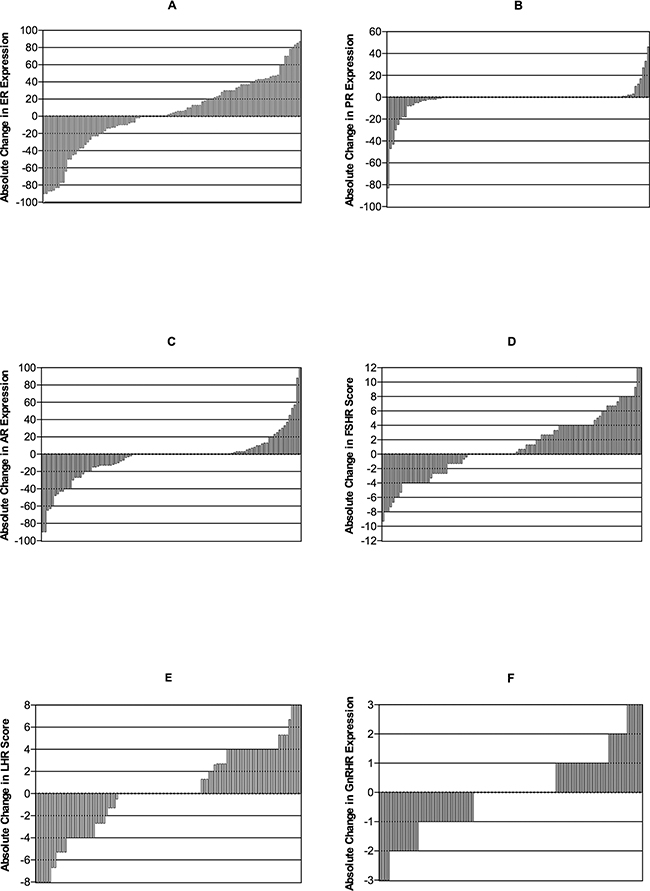 Figure 1: Waterfall plot showing absolute change in ER (A), PR (B), AR (C), FSHR (D), LHR (E), and GnRHR (F). Quantitative hormone receptor change was calculated as quantitative expression in the recurrent specimen minus that in the primary specimen in each case. For ER, PR, AR and GnRHR, this change was the difference in positive staining proportion. For FSHR and LHR, the change was IRS difference. Plots on the horizontal line represent unchanged status. Plots over and under the horizontal line represent increased and decreased positive staining proportion or IRS, respectively.

We then analyzed the distribution of hormone receptor-based molecular subgroups according to our previous study (Table 5) [12]. As we previously reported, a trend of increasing risk of death was observed for the following four subgroups: PR-ER-AR+, PR+, PR-ER+AR+, PR-ER-AR- and PR-ER+AR- [12]. In our current study, the proportion of PR-ER+AR- cases increased in recurrent vs. primary specimens (54.9% vs. 37.7%, P=0.020).

Our study demonstrated hormone receptor status instability in a portion of HGSC patients during ovarian cancer progression. We also associated patient risk of death with tumor hormone receptor status. Receptor status discordance between primary and recurrent breast cancers has been addressed in recent work [19]. Approximately 10–40% of breast cancer patients exhibited unstable receptor statuses during tumor progression [7–9]. Different mechanisms for receptor discordance have been proposed, such as intratumoral heterogeneity and selection through previous treatments [20, 21]. Receptor status instability has also been correlated with patient survival, and could influence therapeutic decision making in the management of recurrent patients [7–9].

The present study identified hormone receptor status discordance between paired primary and recurrent ovarian cancers for the first time. Furthermore, we observed that the proportion of the PR-ER+AR- subgroup, which had the worst prognosis, increased in recurrent vs. primary HGSC cases.

Hormone therapy (tamoxifen, aromatase inhibitors, and others) is considered a salvage therapy for recurrent ovarian cancer patients, although results have been unsatisfactory [3–5]. However, a phase II study of letrozole in ER+ relapsed ovarian cancer patients had more promising response rates [6]. As hormone receptor status may change during ovarian cancer progression, endocrine therapy administration should be based on hormone receptor status in recurrent patients. Additionally, FSHR or GnRHR targeted agents have been developed using corresponding ligands as targeting moieties [24, 25]. Targeted therapy relies on corresponding receptor expression, and biopsies are necessary to confirm this expression.

This study was conducted according to the Declaration of Helsinki and was approved by the Committee at Fudan University Shanghai Cancer Center. Written informed consent was obtained from all study participants. Our retrospectively study included 107 women who underwent both primary staging or debulking surgery and secondary cytoreduction to treat HGSC at Fudan University Shanghai Cancer Center between April 2005 and June 2013. Patients were excluded if they had received neoadjuvant therapy prior to primary surgery, were found to have other histological diagnoses on pathological review, or if paraffin-embedded tissue samples were not available.

Clinical and pathological data were obtained from medical records, cancer registries, and pathology reports. Patient characteristics, including age, FIGO stage, surgical outcomes, date of primary and secondary surgeries, date of progression or recurrence, date of last follow-up, and disease status at last contact, were collected. Patient follow-up for this study ended on December 31, 2014.

Histological diagnoses were based on the WHO criteria [13], and all paired primary and recurrent specimen slides were reviewed by two experienced gynecologic pathologists. A microarray (1 mm) with triplicate tissue samples from each tumor was prepared [11, 14]. We collected ovarian masses as the primary specimens. We also collected recurrence specimens: 92/107 (86.0%) from pelvic masses, 13/107 (12.1%) from metastatic lymph nodes, and 2 (1.9%) from isolated thoracic masses. Intra-class correlation coefficient (ICC) was calculated to evaluate the internal consistency of immunoscores of three cores from each individual tumor sample. Cronbach’s α indexes were approximately 0.9, which meant that there were no differences in parameter expression among the different cores. Sections (3μm) of the completed tissue microarray were analyzed by standard immunohistochemistry methods. Immunohistochemical staining was performed in all cases for ER and PR using a Ventana Benchmark XT autostainer (Ventana Medical Systems Inc., Tucson, AZ, USA). AR, FSHR, LHR and GnRHR staining was performed using the Envision horseradish peroxidase system following the manufacturer’s protocol (DAKO EnVision System K5007). Primary antibodies used in this study were as follows: ER (ERα, Roche, Germany, SP1), PR (Roche 1E2), AR (Abcam, UK, ab133273, 1:100), FSH-R (Abcam ab150557, 1:100), LH-R (Santa Cruz, USA, sc-25828, 1:40), and GnRH-R (Abcam ab183079, 1:50). Negative (no primary antibody) and positive (according to the primary antibody instructions) controls were included in each staining run.

SPSS software (version 21.0) and GraphPad Prism (version 6.0) were used for statistical analyses. Descriptive statistics were used for demographic data and were summarized as means ± standard deviations (SD), medians with interquartile ranges (IQRs) or ranges, or frequencies with percentages. Categorical data were compared via chi-square or Fisher’s exact tests as appropriate. A two-tailed McNemar test was used to evaluate biomarker discordance in the same patient before and after chemotherapeutic treatment. OS was analyzed via the Cox regression method, which is expressed as hazard ratios (HRs). P<0.05 was considered statistically significant, and all reported P-values were 2-sided.

We would like to thank all doctors, nurses, patients, and their family members for their kindness to support our study.