LL-37, the active product of human cathelicidin antimicrobial peptide (CAMP) has a broad spectrum of antibacterial activity. LL-37 also has important physiological functions in immune regulation, angiogenesis and in modulating apoptosis. The roles of LL-37 in oral squamous cell carcinoma (OSCC) are still not clear. The correlation between DNA methylation and human CAMP expression is also unknown. Here human CAMP/LL-37 expression was assessed by immunohistochemistry in normal and OSCC tissues. The results indicated that low expression of CAMP/LL-37 correlated with histological differentiation and lymph node metastasis and also promoted tumor progression. A cell-specific methylation pattern in the promoter region of human CAMP was detected. Treatment with 5-aza-2’-deoxycytidine, a DNA demethylation reagent can increase human CAMP expression in epithelial cancer cells. The reporter assay showed that unmethylated human CAMP promoter activity was significantly higher than methylated promoter activity. Taken together, these results suggested that human CAMP/LL-37 might act as a tumor-suppressor in OSCC and DNA methylation might play roles during carcinogenesis via directly downregulating human CAMP promoter activity.

Keratinocytes are the first mucosal epithelial cells to provide barrier protection against both oral and ingested enteric pathogens [1]. Antimicrobial peptides (AMPs) within keratinocytes also appear to increase resistance to bacterial invasion [1, 2]. Human cationic antibacterial peptide (CAMP, also called hCAP18) is the only cathelicidin in humans, and is primarily found in the secondary granules of neutrophils [3, 4]. The C-terminal end of this protein also contains a 37-amino acid-long peptide (LL-37) with a broad-spectrum antibacterial activity [4, 5]. Besides its broad antimicrobial activity, LL-37 also plays roles in stimulation and modulation of cytokine release from different immune cells [3, 4]. Recently, Overexpression of LL-37 was found to promote development and progression of ovarian, lung and breast cancers, and to suppress tumorigenesis in colon and gastric cancer [6, 7]. However, the roles of LL-37 in oral squamous cell carcinoma (OSCC) are not clear.

Expression of CAMP/LL-37 and Ki-67 in OSCC tissues 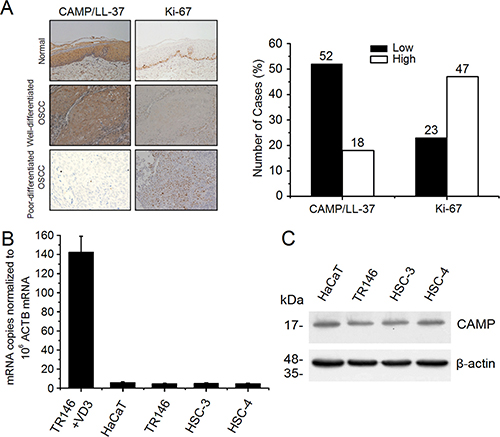 Table 1: Correlation between human CAMP/LL-37 and Ki-67 expression in OSCC

Table 2: Human CAMP/LL-37 expression and its correlation with clinicopathological features in OSCC

To induce DNA demethylation, cells were incubated with 5-Aza-CdR (an inhibitor of DNA methylation) continuously for 6 days. After incubation, cells were collected for further analysis. Bisulfite sequencing (BSP) was also performed to confirm the demethylation effects of 5-Aza-CdR treatment. The results showed that 5-Aza-CdR treatment induced an obvious level of demethylation (Figure 3A). The 5-Aza-CdR treatment can significantly increase the expression of human CAMP while the induction effects are moderate in these cell lines (Figure 3B and 3C). The induction effects for mRNA copies detected by qRT-PCR were not significant which might be caused by low levels of mRNA copies of CAMP which are hard to accurately quantify in these cell lines (data not shown). These results indicated that other transcriptional regulators are also needed in these cell lines, and that DNA methylation in the promoter region of human CAMP might downregulate expression of human CAMP. 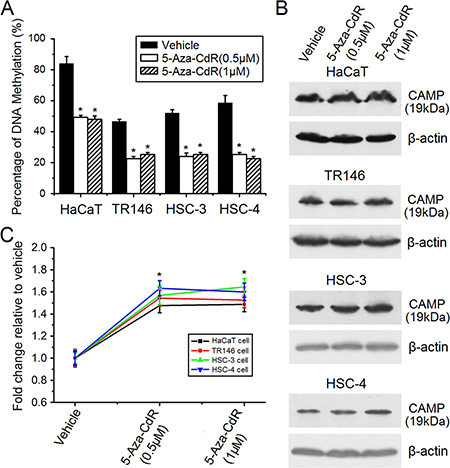 Treatment of 5-Aza-CdR can induce genome-wide demethylation, therefore the induction effects observed by 5-Aza-CdR treatment might also be indirect (Figure 3). To clarify whether DNA methylation can directly downregulate human CAMP promoter activity, a pCpGfree-basic-Lucia construct devoid of CpG dinucleotides was used for luciferase reporter assay. pCpGfree-CAMP (-828/-1) was treated with M. SssI and M. HpaII methyltransferase. S-adenosylmethionine (SAM) was used as the methyl group donor for the enzymatic reaction. Plasmids of no treatment, M.SssI or SAM treatment were used as control. Methylated or unmethylated plasmids were then transfected into cells and luciferase activities were measured. The results indicated that a higher promoter activity was detected in these epithelial cancer cells transfected by unmethylated pCpGfree-CAMP (-828/-1) constructs. About 20–35% lower promoter activity was found when pCpGfree-CAMP (-828/-1) constructs treated with M.SssI (methylated constructs) were transfected into HaCaT, TR146, HSC-3 or HSC-4 cells compared with unmethylated constructs (Figure 4). In addition, cells transfected with pCpGfree-CAMP (-828/-1) constructs that were only methylated by M. HpaII methyltransferase treatment also indicated a similar downregulation of promoter activity (Figure 4), which suggests that the CpG sites for M. HpaII in human CAMP promoter are important for the regulation while scattered methylation on CpG sites may not be effective to attenuate the gene promoter activity. The results obtained here also implied that the closest CpG site (-233/-232) to the major transcriptional start site of human CAMP is important for the transcriptional regulation (Figure 4). These observations are consistent with the results that the induction of human CAMP expression by 5-Aza-CdR treatment (Figure 3). Taken together, these results strongly suggest that DNA methylation directly downregulates human CAMP promoter activity in these epithelial cancer cells. 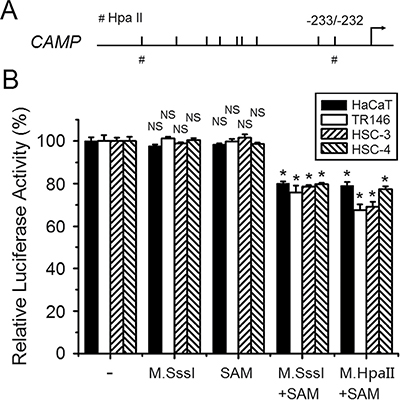 Recently, LL-37 has been associated with tumor surveillance and anti-tumor effects [3, 6, 7]. Meanwhile, tumor-promoting effects have also been described [3, 6, 7]. The role of LL-37 in tumor development is tissue specific [6]. The expression levels of LL-37 are increased in ovarian, lung, breast cancer and malignant melanoma cells [3, 6]. In contrast, the expression levels of LL-37 are decreased in cells from colon or gastric cancers [3, 6]. Mechanistically, LL-37 contributes to immunity, pathophysiology and cell signaling involved in malignant tumor growth [6, 20]. Oral cancer is the sixth most common cause of death from cancer worldwide and the most common form of oral cancer is OSCC [21]. Little is known about the roles of LL-37 in OSCC. The immunohistochemistry results reported here indicated that the low expression cases of CAMP/LL-37 were 52/70 (74.3%) in OSCC compared with normal oral mucosa (Figure 1A). The results also showed that the low expression of CAMP/LL-37 was related to histological differentiation, lymph node metastasis, and promoted tumor progression in OSCC tissues (Table 2). These results suggested that CAMP/LL-37 might act as a tumor suppressor in OSCC. Though the mechanism of CAMP/LL-37 downregulation in OSCC is still not fully clear, for the first time the results reported here implied that CAMP/LL-37 might be useful for the development of a novel diagnostic marker and therapeutic target for OSCC patients.

The investigation represents novel mechanistic insights into the epigenetic regulation of human CAMP in oral epithelial cancer cells. Undoubtedly, the correlation established here between DNA methylation in the promoter region and human CAMP expression will aid future elucidation of the regulatory mechanism of human CAMP expression in physiological and pathological conditions.

A total of 70 patients (ages 28 to 80 years, 48 men and 22 women) who had undergone surgery at the Affiliated Hospital of Guilin Medical University were enrolled in this study. All patients underwent complete surgical resection between 2009 and 2015. This study was approved by the Ethical Committees of Guilin Medical University and informed consent was obtained from all patients. Histologically, 59 cases were classified as well or moderately differentiated, with 11 classified as poorly differentiated OSCC. Clinical details including age, gender, tumor size, tumor differentiation and lymph node metastasis were gathered from surgical records of the patients. Tumors from each patient were formalinized and cut into parallel 4–5 μm sections.

The sections were incubated with primary monoclonal anti-LL-37 antibody (1:200; Santa Cruz Biotechnology, sc-166770, Dallas, TX). In addition, to determine the proliferative cell activity and its correlate with CAMP/LL-37 expression, we examined Ki-67 expression using anti-Ki-67 monoclonal antibody (MIB-1, Dako, Carpinteria, CA). The sections were incubated with primary antibodies at 4°C overnight after antigen retrieval by microwave treatment in citrate buffer (pH 6.0), detection by the avidin-biotin peroxidase complex system using an LSAB kit (Doko, Kyoto, Japan). A labeling index, percentage of CAMP/LL-37 or Ki-67 positive cells was determined by examining of at least 1000 tumor cells at 200× magnification. The expression of CAMP/LL-37 and Ki-67 were divided into high expression (more than 20% positive cells) and low expression (less than 20% positive cells).

aRegions of oligonucleotide not derived from human CAMP are underlined.

The plasmid pCpGfree-CAMP (-828/-1) was treated with methyltransferase M. SssI or M. HpaII. Methylation was confirmed by treatment of restriction enzyme HpaII. Cells were seeded in 6-well plates. At approximately 60–90% confluence, cells were transfected with plasmids methylated or unmethylated using Lipofectamine 3000 (Life technologies) according to the manufacturer’s recommendations. Briefly, 2.5 μg of plasmid DNA and 5 μl P3000 reagent was diluted in 125 μl Opti-MEM and then were added into 125 μl Opti-MEM with 5 μl Liofectamine 3000 reagent. After 5 min of incubation, the mixture was added into each well. After 24 h, medium was aspirated and replaced with 800μl fresh medium. 48 h after transfection, medium was collected and 20 μl aliquots were added into 96 well plates. 100 μl Quanti-LucTM (Invivogen) was injected into each well and luciferase activities were read.

Generally, statistical analysis was performed with SPSS 19.0 (IBM, Armonk, NY). Comparisons between two groups were done with Student’s t test, and multiple comparisons were done with one-way ANOVA followed by Bonferroni’s post hoc test. For immunohistochemical staining analysis, the χ2 ant T test was used for comparison of the data between two groups. A p value less than 0.05 was considered to indicate statistical significance.

We would like to thank Dr. Fred Bogott at Austin Medical Center, Austin of Minnesota, USA, and Dr. Joshua Liao at Hormel Institute, University of Minnesota, for their excellent English editing of the manuscript.