Estrogen receptor alpha positive (ER+) of breast cancer could develop resistance to antiestrogens including Tamoxifen. Our previous study showed that the E3 ubiquitin ligase HRD1 played an important role in anti-breast cancer. However, its role in chemotherapy resistance hasn’t been reported. In this study, we found that HRD1 expression was downregulated in Tamoxifen-resistant breast cancer cell line MCF7/Tam compared to the Tamoxifen sensitive cell line MCF7. Moreover, S100A8 is the direct target of HRD1 by proteome analysis. Our data showed that HRD1 decreased the protein level of S100A8 through ubiquitination while HRD1 was regulated by acetylation of histone. More importantly, HRD1 knockdown significantly increased the cell survival of MCF7 cells to the Tamoxifen treatment. HRD1 overexpression sensitized MCF7/Tam cells to the Tamoxifen treatment in vitro and in vivo. In conclusion, the decrease of HRD1 expression contributed to Tamoxifen resistance in breast cancer.

S100A8, a calcium-binding protein, is secreted primarily by granulocytes and monocytes, and is upregulated during the inflammatory response. It is reported that, S100A8 is associated with estrogen receptor loss in breast cancer [3]. Furthermore, S100A8 is involved in the chemistry-drug resistance in lots of kind of tumors. In leukemia cells, S100A8 promotes the autophagy so that to contribute to the drug resistance [4]. And in the breast cancer cells, the increased secretion of S100A8/A9 exacerbated the resistance of breast cancer to doxorubicin with cyclophosphamide [5]. More importantly, the CXCL1/2-S100A8/A9 loop is the cancer cell survival axis linking the chemotherapy resistance and metastasis in breast cancer and is hyperactivated by chemotherapy. Therefore, there is a possibility of clinically targeting this axis both to limit the dissemination of cancer cells and to diminish drug resistance [6].

In our recent study, we have found that HRD1, the E3 ubiquitin ligase, interacted with IGF receptor (IGF-1R) directly so that to decrease the protein level of IGF-1R through ubiquitination in both MDA-MB-231 cells and MCF7 cells. Moreover, HRD1 also took part in inhibiting the EMT in breast cancer cells [7]. Therefore, HRD1 may play as an anti-tumor role in breast cancer cells. However, whether HRD1 implicated the chemistry-drug resistance of breast cancer remains unknown. In this study, we examined the expression of HRD1 in MCF7/Tam and MCF7 cells and investigated its function in degradation of S100A8, in order to better understand its role in chemistry-drug resistance of breast cancer and its potential implications for cancer therapy.

Evidence has shown that the acetylation status of histones implicated in the chemistry-drug resistance in tumors [8–12]. The acetylation of histone promoted gene expression by increasing the approachability of promoters to the transcription machinery [13, 14]. We found that HRD1 was significantly downregulated in MCF7/Tam cells compared to MCF7 cells. We also found the histone deacetylase inhibitor, TSA, could upregulate HRD1 expression at a dose-dependent manner in MCF7 cells. We hypothesized that epigenetic modification might be involved in regulation of HRD1 expression in MCF7/Tam cells. Thus, we tested this hypothesis in both MCF7/Tam cells and MCF7 cells.

HRD1 was downregulated in MCF7/Tam cells 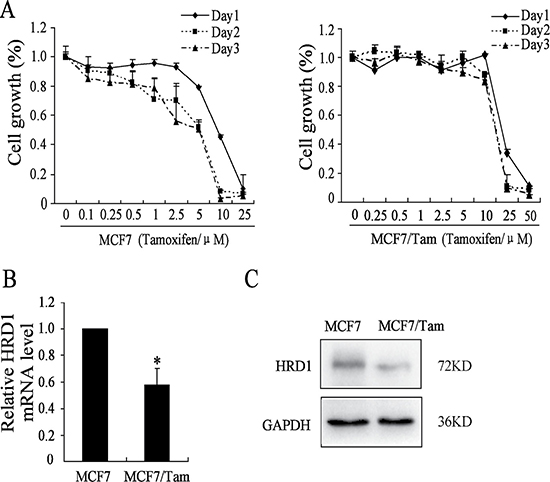 Figure 1: HRD1 is downregulated in MCF7/Tam cells. (A) Cells were treated with various concentrations of Tamoxifen for about 24 h/48 h/72 h. Survived cells were measured by SRB assay. SRB assay shows that MCF7/Tam cells are much more resistant to Tamoxifen than MCF-7 cells. (B) Western blotting analysis showing the protein expression of HRD1 in MCF7 and Tam-R MCF7 cells. The protein level of HRD1 in MCF7 cells are much more than MCF7/Tam cell. GAPDH was used as an internal loading control. (C) Realtime PCR indicates a significant down-regulation of HRD1 in mRNA level in MCF7/Tam cells compared with MCF7 cells. All graphs show means ± S.D. of three independent experiments, *P < 0.05, compared to MCF7.

In order to further explore the probability of chemoresistance, we overexpressed Vector or HRD1 in MCF7 cells and then did IP assay. As shown in Supplementary Figure 1A, 23 proteins were identified with obviously changes compared between overexpression of Vector and HRD1 (ESM Table 1). Among these identified proteins, S100A8 is related to chemoresistance of breast cancers. Supplementary Figure 1B shows the relative abundance of each mass fragment in both two samples of S100A8.

Table 1: The results of proteome analysis

To verify the results from proteome analysis, we then did the Co-IP. As shown in Figure 2A, HRD1 interacted with S100A8 in MCF7 cells by Co-IP. Furthermore, the results of immunofluorescence show that, HRD1 and S100A8 co-located in the cytoplasm of the breast cancer cells (Figure 2B). 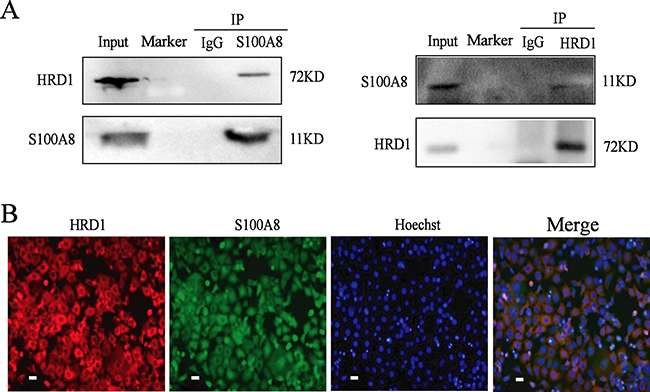 Figure 2: HRD1 directly interacted with S100A8. (A) MCF-7 cells were pretreated with MG132 (10 μmol/l) for 6 h and endogenous protein-protein interactions between HRD1 and S100A8 were determined by immunoprecipitation (IP) with HRD1 or S100A8 antibodies, followed by immunoblotting. IgG was used as a negative control for IP. (B) Inmmunofluorescence to certificate HRD1 and S100A8 can co-locate in the cytoplasm in MCF7 cells (Scale bar = 20 μm).

HRD1 promoted the degradation of S100A8 through ubiquitination

In MCF7 cells, overexpression of HRD1 inhibited S100A8 protein level at a dose-dependent manner (Figure 3A). For HRD1 is an E3 ubiquitin ligase, we further explored the potential mechanisms related to the decrease of HRD1 on S100A8. We treated MCF7 cells with cycloheximide (CHX), an inhibitor of protein synthesis, resulted in promotion of S100A8 degradation by overexpressing HRD1 (Supplementary Figure 2A). However, this degradation was suppresses by HRD1 knockdown (Figure 3C). 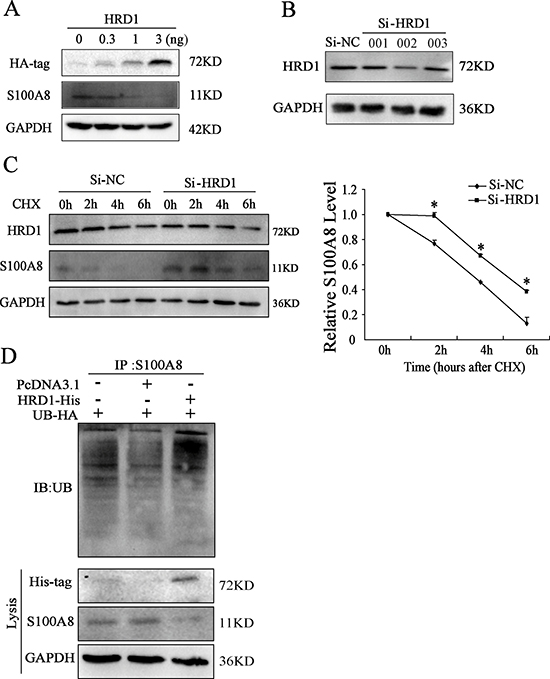 Figure 3: HRD1 promotes the degradation of S100A8 through ubiquitination. (A) The protein level of HRD1, S100A8 through Western blotting analysis in MCF7 cells with overexpression of different dose of HRD1. (B) The protein level of HRD1 in MCF7 cells by knockdown HRD1 through Western blotting analysis. (C) MCF7 cells were transfected with si-HRD1 and the control for 48 h, followed by exposure to cycloheximide (CHX 50ng/ml) for 0, 2, 4, 6 h. The protein of S100A8 and HRD1 in whole cell lysates was measured. (D) Ubiquitination of S100A8 was induced by HRD1. HA-ubiquitin was co-expressed in MCF7 cells with His-HRD1 or Vector control with treatment of MG132 (10 μmol/l) for 4 h. Ubiquitinated S100A8 was immunoprecipitated using S100A8 antibody and further detected with UB antibody. The endogenous S100A8 and His-HRD1 in the whole cell lysates were examined by S100A8 and His-tag antibodies. *P < 0.05, compared to Si-NC.

HRD1 was upregulated by acetylation of histone 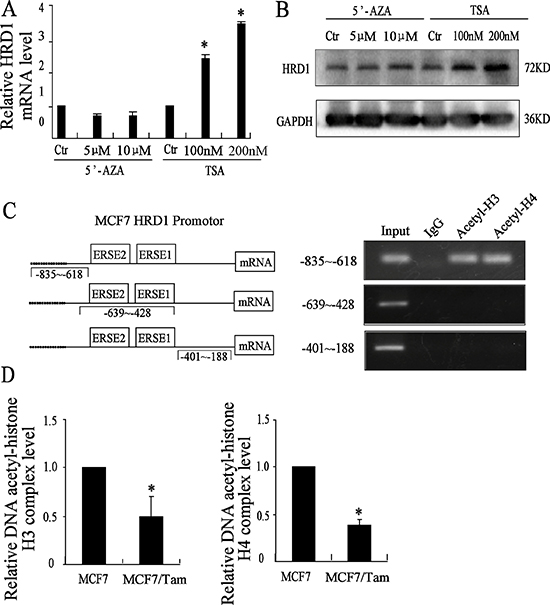 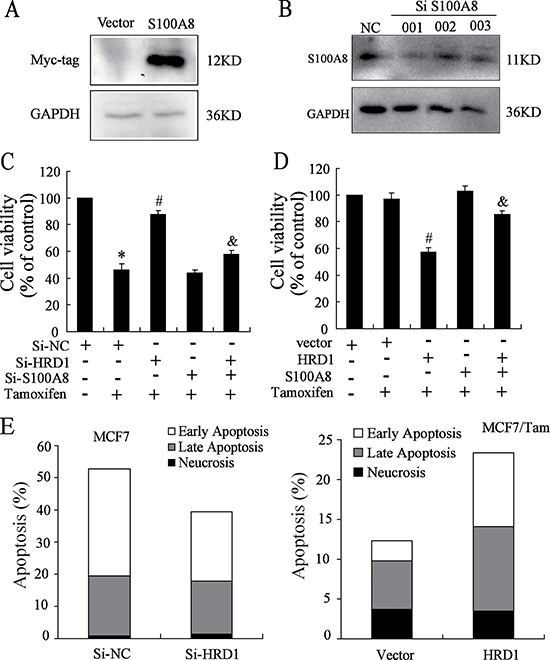 We explored the in vivo effects of HRD1 on the breast cancer chemoresistance by injecting MCF7/Tam cells stable overexpressing HRD1 or the corresponding controls into nude mice, respectively (Supplementary Figure 5). As expected, overexpresssion of HRD1 significantly increased the sensitivity of MCF7/Tam cells to Tamoxifen. As indicated in Figure 6A, the growth of xenograft tumors was much slower in the group transfected with EGFP-tagged HRD1 lentivirus than in the group transfected with EGFP lentivirus. However, the body weight did not exhibit obvious difference between the two groups (Figure 6B).

Figure 6: Overexpression of HRD1 increased the sensitivity of drug-resistant breast tumors to Tamoxifen treatment in vivo. MCF7/Tam cells stably overexpressing of HRD1 and the corresponding controls were injected into the right flank and left flank of nude mice, respectively. Tumor volume (A) and body weights of mice with tumors (B) were measured. *P < 0.05, compared to vector.

We identified for the first time S100A8 as the down-stream target of HRD1 in mediating its drug-resistant effects on breast cancer cells. S100A8 plays an important role in chemotherapy resistance and metastasis of breast cancer [3, 6]. In the present study, we found that HRD1 downregulated S100A8 expression. Furthermore, we demonstrated that HRD1 could interact with S100A8 acting as a ubiquitin E3 ligase that targeted S100A8 for degradation through proteasomal degradation pathway. In MCF7 cells, S100A8 deletion reversed the effect of knockdown of HRD1 on Tamoxifen treatment. In MCF7/Tam cells, S100A8 overexpression reversed the effect of upregulation of HRD1 on Tamoxifen treatment. Therefore, HRD1 mediated breast cancer resistance by directly inhibiting S100A8 expression.

HRD1 and S100A8 expression was silenced utilizing specific small interfering RNA (HRD1-siRNA, S100A8-siRNA and Si-NC) purchased from Genechem (Shanghai, China). HRD1-siRNA and Si-NC were the same as described in our previous study [7]. And the sequence of S100A8-siRNA wAS on ESM Table 1. The S100A8 expression plasmid was constructed by inserting the full-length coding region sequences into pCMV5-myc vector between NdeI and BamHI. The primer sequence of the full-length coding region of S100A8 is: 5′-GGAATTCCATATGATGTTGAC CGAGCTGGAG-3′ (Forward), 5′-CGGGATCCCTACTC TTTGTGGCTTTCTTC-3′ (Reverse). The HRD1 expression plasmid was described previously [7]. All constructions used here were sequenced and confirmed to be correct.

Co-immunoprecipitation (Co-IP) was performed according to our previous methods [7]. And after using SDS-PAGE to test the IP samples staining by CBB (Coomassie Brilliant Blue), we then cleaved the two whole sample lanes to submit the cleaved lanes to Analysis and Test Centre of Nanjing Medical University to do the proteome analysis.

ChIP assays were performed using a commercially available ChIP Assay Kit (Millipore) according to our previous methods [7]. Sequences of the primers used were available in ESM Table 2.

Table 2: Sequences of oligonucleotides used as primers for real-time PCR, siRNA and ChIP-qPCR

Fifty percent confluent cells were cultured on glass coverslips in the wells of 24-well plates for 24h. Then cells were washed, fixed, and permeabilized with 0.3% Triton X-100 for 10 min. After blocking with goat serum for 2 h, cells were incubated for 1 h with antibody anti-S100A8 (1:30dillution) (Proteintech, Chicago, USA) and Anti-HRD1 (1:50 dilution) (Abcam, Cambridge, UK). Then, dishes were washed and incubated with Alexa Fluor 488 or Alexa Fluor 594-conjugated secondary antibodies (1:50 dilution) for 1h at room temperature. Nuclei were stained with Hoechst (10 mg/ml) for 2 min. Samples were examined with fluorescence microscope (Zeiss, Oberkochen, German).

Female athymic nude mice (6-weeks-old) were purchased from Shanghai Laboratory Animal Centre (Chinese Academy of Sciences, Shanghai, China) and maintained in cage housing under specific pathogen-free conditions. Cultured MCF7/Tam cells were transfected with EGFP or EGFP-tagged HRD1 lentivirus according to previous report [7]. Cells were injected either into the right or left flank region of the mice to generate subcutaneous xenografts. Tamoxifen was given once the size of the xenograft reached approximately 4 mm in diameter. The mice were randomly assigned into two groups of eight. They were treated with Tamoxifen by intragastric administration with dosage of 25 mg/kg (twice a day) for 2 weeks. Tumor volumes were estimated using the formula: 0.5 × length × width2. This study was carried out in accordance with the guidelines of the Institutional Animal Care and Use Committee at Nanjing Medical University and was approved by the Committee on the Ethics of Animal Experiments of Nanjing Medical University.

Data were analyzed using the SPSS statistics 16.0 software package. Comparisons were performed using the Student’s t test between two groups or ANOVA in multiple groups. A P value < 0.05 was considered to be statistically significant.