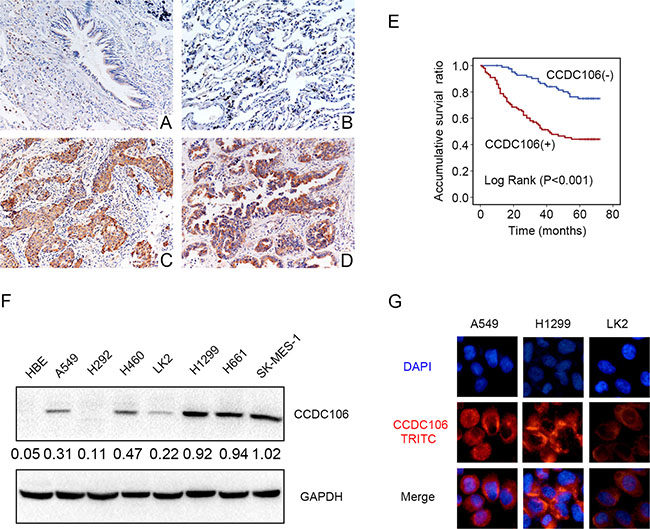 Table 2: Summary of cox univariate and multivariate regression analysis of the association between clinicopathological features and overall survival in 183 cases of non-small cell lung cancer (NSCLC)

CCDC106 enhanced NSCLC proliferation in vitro and in vivo

Based on previous data (Figure 1F) and TP53 status, A549 and H1299 cells were selected as representative of CCDC106-low and CCDC106-high cell lines, respectively. The transfection efficiencies of pCMV-CCDC106 or CCDC106-siRNA were confirmed by WB in A549 and H1299 cells (Figure 2A). As measured by MTT assay, CCDC106 overexpression enhanced A549 cell proliferation. Conversely, CCDC106 knockdown decreased H1299 cell proliferation compared to controls (Figure 2B). Consistent with MTT assay results, CCDC106 overexpression in A549 cells increase foci numbers and sizes. However, CCDC106 knockdown in H1299 cells decreased foci numbers and sizes (Figure 2C). 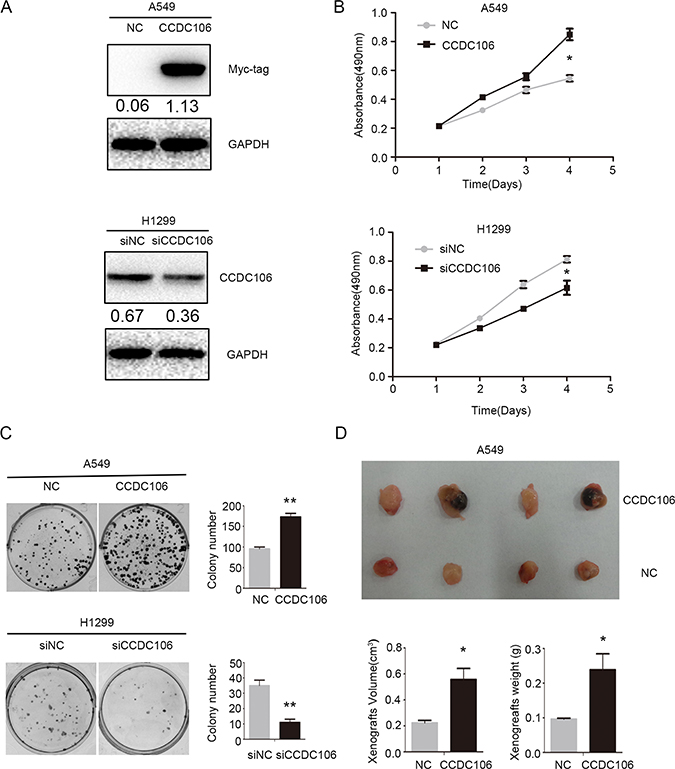 Figure 2: CCDC106 enhanced NSCLC cell proliferation in vitro and in vivo. Transfection efficiency after overexpressing CCDC106 in A549 cells and silencing CCDC106 in H1299 cells, as tested by WB (A) CCDC106 overexpression enhanced A549 cell growth (B) and colony formation (C) while knockdown reduced H1299 cell growth (B) and colony formation C. Average tumor volumes and weights were higher in mice subcutaneously injected with A549-CCDC106 (+) cells compared to controls (D). *P < 0.05, **P < 0.001.

CCDC106 upregulated Cyclin A2 and Cyclin B1 expression 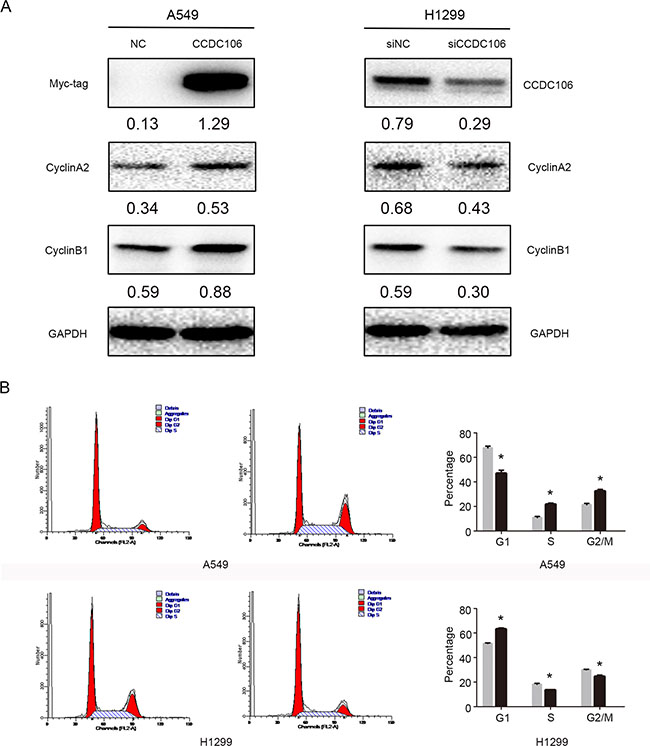 Finally, we screened key signaling pathway proteins involved in promoting cell cycle progression. WB results demonstrated that CCDC106 overexpression in A549 cells upregulated AKT phosphorylation at Ser 473; this phosphorylation was downregulated in H1299 cells following CCDC106 knockdown (Figure 4A). No other key proteins studied showed changes following CCDC106 up- or downregulation (Supplementary Figure 2). To assess whether AKT phosphorylation induced Cyclin A2 and Cyclin B1 upregulation, we treated CCDC106-overexpressing A549 cells with the AKT inhibitor, LY294002 (10 μM). Cyclin A2 and Cyclin B1 were no longer increased after LY294002 treatment (Figure 4B), and cell colony formation was reduced (Figure 4C). 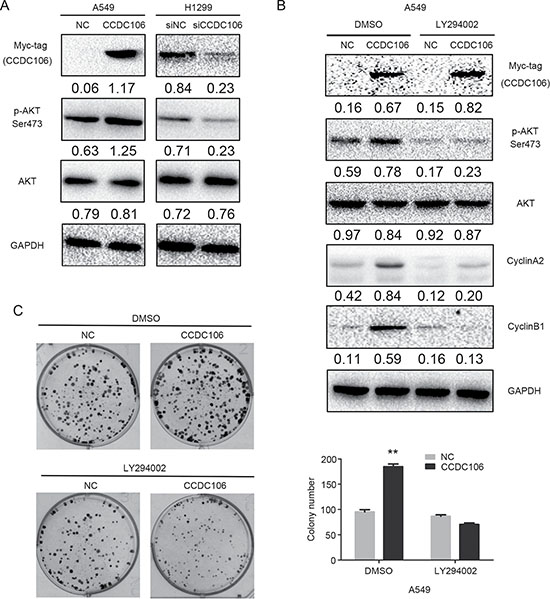 Figure 4: CCDC106 increased Cyclin A2 and Cyclin B1 expression via AKT activation. Phosphorylated AKT (Ser473) was increased by CCDC106 overexpression in A549 cells, and decreased by CCDC106 knockdown in H1299 cells (A) LY294002 treatment rescued CCDC106-induced Cyclin A2 and Cyclin B1 upregulation (B) and NSCLC cell colony formation (C) **P < 0.01.

CCDC106 is a newly discovered protein, whose expression patterns and role in tumor progression were previously unknown. We found that CCDC106 was highly expressed in the cytoplasm of NSCLC tumor cells and lung cancer cell lines. Cytosolic CCDC106 overexpression correlated with advanced TNM stage, positive lymph node metastasis, and unfavorable prognosis, but not with patient age, sex, tumor differentiation, or histopathological type. Statistical analyses revealed no correlations between CCDC106 expression (positive or negative) and tumor differentiation grade in either adenocarcinomas (P = 0.45) or squamous cell carcinomas (P = 0.37) (Supplementary Table 1). We also analyzed correlations between CCDC106 expression and driver mutations, such as EGFR and KRAS, in adenocarcinoma tissues. Among 115 adenocarcinoma cases, only 38 harbored a KRAS mutation, and 73 had an EGFR mutation. No KRAS-mutated cases were also CCDC106-positive, and our results indicated that CCDC106 expression was not correlated with EGFR status (P = 0.825, Supplementary Table 2).

Prior studies indicated that CCDC106 co-localized with p53 in Hela cells, and promoted p53 degradation. Our in vitro and in vivo studies suggested that CCDC106 overexpression increased cell proliferation, in agreement with Zhou, et al. [2]. We also found that CCDC106 upregulated expression of cell cycle-related proteins, such as Cyclin A2 and Cyclin B1, which regulate G2/M phase of the cell cycle [10–13]. The A549 and H1299 cell lines employed in this study harbor a wild-type TP53 and deletion mutation, respectively. However, the function of CCDC106 in regulating proliferation or cell cycle status was similar in these lines, indicating that CCDC106-induced cell cycle and cell proliferation changes are independent of TP53 status. Similarly, neither p53 nor phosphorylated p53 was affected by CCDC106 overexpression (Supplementary Figure 3A). Co-immunoprecipitation (co-IP) results suggested no protein interaction between CCDC106 and wild-type p53 (Supplementary Figure 3B). This was inconsistent with the findings of Zhou, et al. [2], possibly due to tissue specificity. Moreover, immunofluorescence staining showed that p53 was mainly located in the nuclei with extremely weak cytoplasmic expression, while CCDC106 was mainly located in the cytoplasm. Only dim cytosolic CCDC106-p53 co-localization was observed in A549 cells (Supplementary Figure 3C). Co-IP and immunofluorescence results suggested that CCDC106 neither binds nor degrades p53 in NSCLC cells.

We screened key signalling pathway proteins that regulate cell cycle progression and cell growth, such as MAPK and AKT pathway members [13–16]. CCDC106 overexpression activated AKT phosphorylation at Ser 473. The AKT inhibitor, LY294002, reduced Cyclin A2 and Cyclin B1 levels, as well as cell proliferation (Figure 4B–4C), indicating that p-AKT likely functions as an upstream effector of these proteins.

In conclusion, we demonstrated that CCDC106 is highly expressed and primarily localized in the cytoplasm in NSCLC tissues and lung cancer cell lines. CCDC106 cytosolic localization was correlated with advanced TNM stage, lymph node metastasis, and unfavorable prognosis in NSCLC. CCDC106 facilitated AKT phosphorylation, leading to Cyclin A2 and Cyclin B2 upregulation, and ultimately enhanced proliferation of lung cancer cells. These results suggest that CCDC106 may be a novel target for lung cancer treatment.

This study was approved by the institutional review board of the China Medical University. Tissue samples were obtained from 183 patients (112 males and 71 females) who underwent complete surgical excision at the First Affiliated Hospital of China Medical University between 2010 and 2012, with a diagnosis of squamous cell carcinoma, adenocarcinoma, or large cell carcinoma. No neoadjuvant radiotherapy or chemotherapy was applied before surgery, and all patients received standard chemotherapy after surgery. Follow-up data was available for all cases. Patient survival was defined as the time from the day of surgery to the end of follow-up or the day of death due to recurrence or metastasis. Median patient age was 61 years (range: 29–80 years). Seventy-three patients were older than 61 years.

Histological examination was performed on formalin-fixed tissues, and tumors were diagnosed and classified according to the 2015 World Health Organization (WHO) classification [17] as follows: 115 adenocarcinomas, 66 squamous cell carcinomas, and two large cell carcinomas. Differentiation grade (well-differentiated: 75, moderately or poorly differentiated: 108) and pN status (pN0: 97, pN1: 29, and pN2: 57) were also recorded. Tumor staging was performed according to the seventh edition of the International Union against Cancer (UICC) TNM Staging System for Lung Cancer [18]. Fifty-one cases were pathological stage I, 69 were stage II, and 63 were stage III. Among 115 adenocarcinoma cases, 38 had a KRAS mutation, and 73 had an EGFR mutation. Among the 38 KRAS-mutated cases, none were CCDC106-positive. In contrast, 33 cases with EGFR mutation were positive (21 cases in extron 19; 12 cases in extron 21).

Cells were cultured in 96-well plates in medium containing 10% fetal bovine serum at approximately 3000 cells/well 24 h after transfection. For quantitation of cell viability, cultures were stained after 4 d via MTT assay. Briefly, 20 μl of 5 mg/ml MTT (thiazolyl blue) solution was added to each well and incubated for 4 h at 37°C. Media was then removed from each well, and the resultant MTT formazan was solubilized in 150 μl of DMSO. Results were quantitated spectrophotometrically at a wavelength of 490 nm. Experiments were performed in triplicate.

A549 and H1299 cells were transfected with pCMV6 or pCMV6-CCDC106 plasmids, negative control or CCDC106-siRNA for 48 h. Cells were then transferred into three 6-cm cell culture dishes (1000 cells per dish) and incubated for 12 d. Plates were washed with phosphate-buffered saline (PBS) and stained with Giemsa. Colonies with more than 50 cells were counted manually under a microscope. Experiments were performed in triplicate.

Cells (500,000) were seeded into 6-cm tissue culture dishes. Twelve h later, cells were transfected with CCDC106 overexpression plasmid or empty vector and CCDC106-siRNA or NC-siRNA. Forty-eight h after transfection, cells were harvested, fixed in 1% paraformaldehyde, washed with PBS, and stained with 5 mg/ml propidium iodide (PI) in PBS supplemented with RNase A (Roche, Indianapolis,IN) for 30 min at room temperature. Data were collected using BD systems. A one-parameter histogram was plotted according to nuclear DNA content in each cell as detected by flow cytometry. Cells in each phase of the cell cycle were determined based on DNA ploidy profiles.

All animal studies followed the experimental animal ethics guidelines issued at China Medical University. Four-week-old female BALB/c nude mice were purchased from Slac (Shanghai, China). Mice were kept in a laminar-flow cabinet under specific pathogen-free conditions for two weeks before use. Each mouse was inoculated subcutaneously in the axilla with 5 × 106 tumor cells (CCDC106-transfected A549 or corresponding vector-transfected control cells) in 0.2 mL sterile PBS. Six weeks after inoculation, mice were sacrificed and autopsied to examine tumor growth and dissemination. In addition, tumors, heart, liver, lung, and kidney were dissected. Tissues from tumors and each organ were fixed in 4% formaldehyde (Sigma) and embedded in paraffin. Serial 6-μm-thick sections were cut, stained with H&E, and examined microscopically.

SPSS version 22.0 for Windows (SPSS, Chicago, IL, USA) was used for all analyses. The Pearson’s Chi-square test and Fisher exact test were used to assess possible correlations between CCDC106 and clinicopathological factors. Kaplan-Meier survival analyses were carried out for all 183 cases and compared using the log-rank test. All of the clinicopathological parameters were included in the Cox regression model and tested by univariate analysis and multivariate analysis using the enter method. Mann-Whitney U test was used for western blot image analysis and invasion assay results. P < 0.05 was considered statistically significant.