Protective effect of hydrogen sulphide against myocardial hypertrophy in mice

Cardiac hypertrophy is a critical component of phenotype in the failing heart. Recently, increasing evidence has demonstrated that oxidative stress plays an important role in the pathogenesis of myocardial hypertrophy. In the present study, we generated a mouse model of transverse aortic constriction (TAC) to investigate whether hydrogen sulfide (H2S) has protective effects against cardiac hypertrophy. Left ventricular structure was analyzed by two-dimensional echocardiography. Oxidative stress was evaluated by measuring malondialdehyde, superoxide dismutase, glutathione peroxidase and reactive oxygen specie in the myocardium. Angiotensin II (Ang-II) was used to induce cardiomyocyte hypertrophy. Neonatal rat cardiomyocytes pretreated with H2S donor sodium hydrosulfide prior to Ang-II exposure were used to determine the involvement of Nrf2 and PI3K/Akt pathway in the antioxidant effects of H2S. Our findings showed that H2S could protect against cardiac hypertrophy by attenuating oxidative stress. The antioxidant roles of H2S in myocardial hypertrophy probably depend on the activation of PI3K/Akt signaling, which consequently increases Nrf2 activity and HO-1 and GCLM expression. In summary, H2S may exert antioxidant effect on cardiac hypertrophy via PI3K/Akt-dependent activation of Nrf2 pathway.

Cardiac hypertrophy, which is characterized by myocardial fibrosis, capillary rarefaction, inflammatory reaction, and cellular dysfunction, consequently results in maladaptive ventricular remodeling and heart failure. The mechanical stress and neurohumoral stimulation are primary triggering events of myocardial hypertrophy. These events are associated with various cellular responses including gene transcription, protein translation, sarcomere assembly and cell metabolism, thereby leading to the progression of cardiac hypertrophy [1, 2]. Under normal conditions, ventricular function is initially maintained by cardiac hypertrophy induced by pressure overload, and this is known as the adaptive phase. However, sustained pressure overload can promote the transition from the adaptive to maladaptive phase, which is characterized by left ventricular enlargement and dysfunction [3].

In recent years, hydrogen sulphide (H2S) has been recognized as a new gaseous signaling molecule aside from nitric oxide and carbon monoxide. It has multiple physiological and pharmacological properties such as cardioprotection, vasorelaxation, antioxidant and anti-inflammatory effects [4]. In the cardiovascular system, H2S is produced in the myocardium and blood vessels from L-cysteine by cystathionine γ-lyase (CSE). Recently, there is growing evidence that H2S plays important roles in the pathogenesis of various cardiovascular diseases [5, 6]. H2S has been found to attenuate myocardial ischemia-reperfusion injury by preservation of mitochondrial function and to reduce the mortality of heart failure induced by myocardial ischemia [7, 8]. In addition, H2S has been shown to improve myocardial fibrosis by inhibiting oxidative stress, blocking TGF-β1/Smad2 signaling pathway, and reducing α-SMA expression in cardiac fibroblasts [9]. In the present study, we generated a mouse model of transverse aortic constriction (TAC) to investigate whether H2S has protective effect against cardiac hypertrophy. 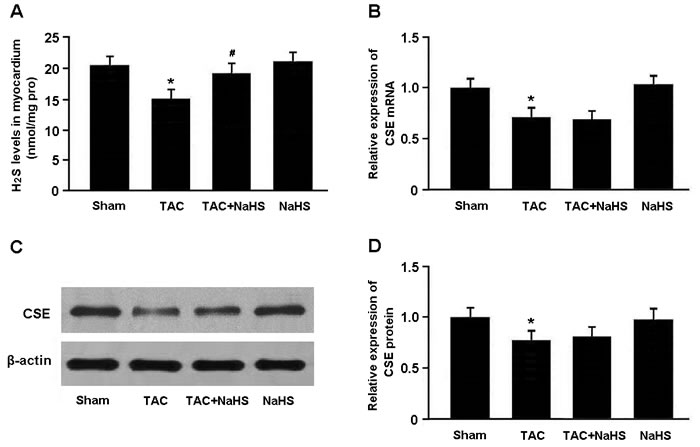 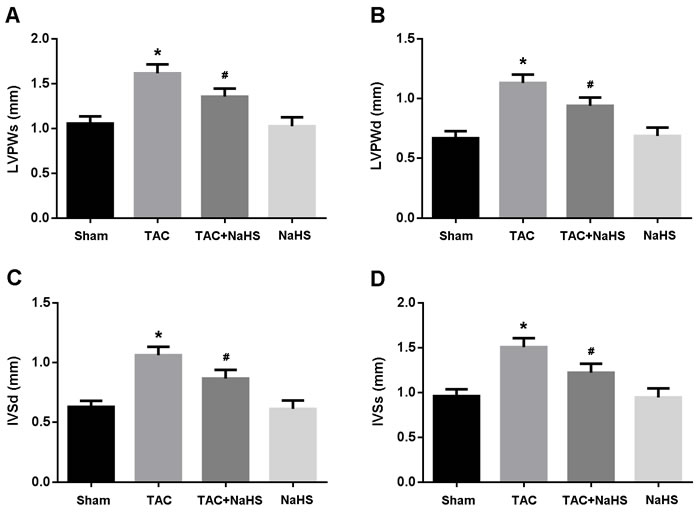 Left ventricular tissue was stained with HE and CSA was found to be significantly increased in the TAC mice and reduced after treatment with NaHS (Figure 3A, 3B). In addition, the expressions of ANF, BNP and β-MHC, indicators of myocardial hypertrophy, were remarkably increased in the TAC group, while their expressions were markedly decreased following treatment with NaHS (Figure 3C-3E). 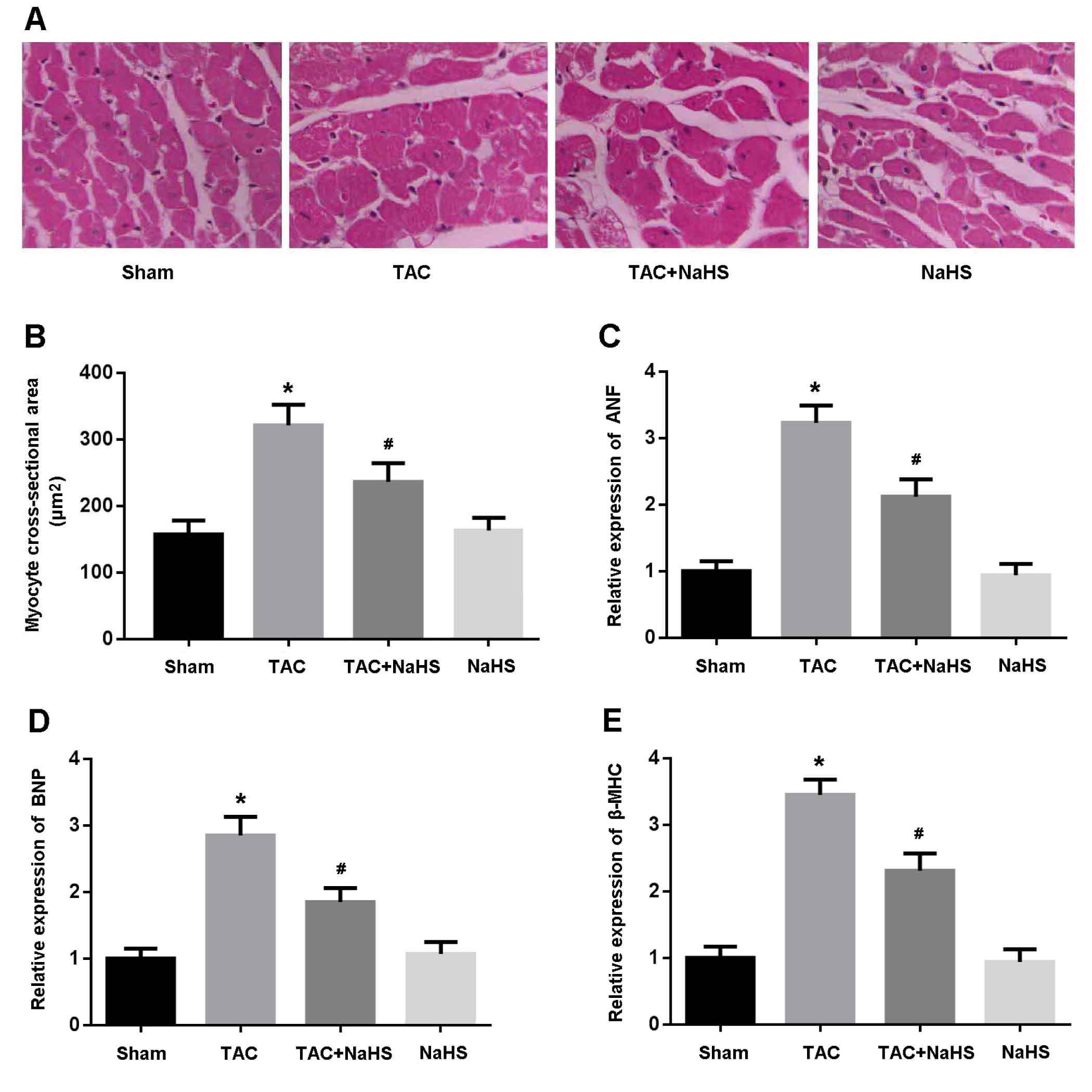 Oxidative stress was evaluated by detecting MDA, SOD, GSH-Px and ROS in the myocardium (Figure 4A-4D). There were significant increase in MDA levels and decrease in SOD and GSH-Px activities in TAC mice, while NaHS treatment was found to reduce MDA levels and enhance SOD and GSH-Px activities. In addition, the ROS generation in myocardial tissue was remarkably elevated in the TAC group and reduced in the TAC+NaHS group. 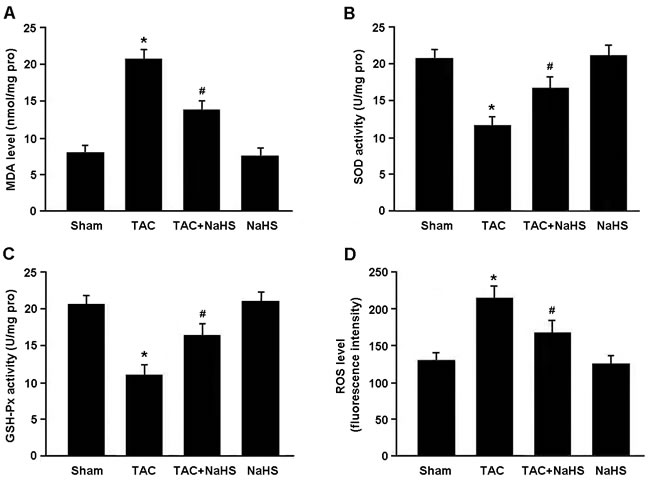 As shown in Figure 5A, the Nrf2 protein accumulated in the myocardial cell nucleus and Nrf2-ARE binding activity was increased in the myocardium of TAC mice after treatment with NaHS. Moreover, the protein expressions of HO-1 and GCLM, downstream targets of Nrf2, were significantly upregulated in the TAC+NaHS group compared with in the TAC group (Figure 5B). 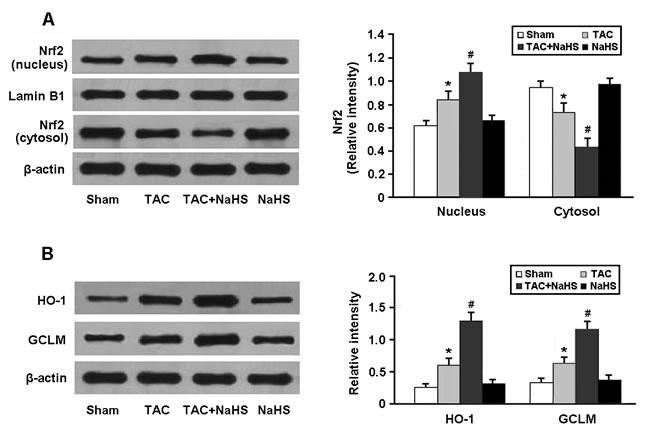 To confirm whether H2S regulates Nrf2 via PI3K/Akt-dependent pathway, we transfected cardiomyocytes with PI3K siRNA and then subjected them to Ang-II. Our results showed that PI3K siRNA-transfected cells exposed to Ang-II and NaHS exhibited reduced expression of phosphorylated Akt and nuclear Nrf2 and increased production of ROS compared with cells not transfected with PI3K siRNA (Figure 7A-7D). 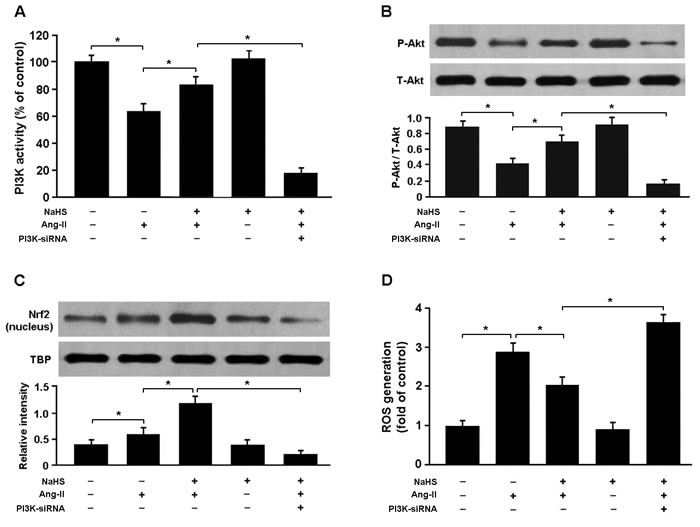 Figure 7: A. PI3K activity in cardiomyocytes was detected by enzyme-linked immunosorbent assay. B. Western blotting analysis of Akt phosphorylation in cardiomyocytes. C. The nuclear protein of Nrf2 were significantly upregulated in cells treated with Ang-II and NaHS and downregulated in PI3K siRNA-transfected cells exposed to Ang-II and NaHS. D. PI3K siRNA-transfected cells pretreated with NaHS (100 μM) for 30 min prior to exposure to Ang-II (150 nM) for 24 h exhibited increased ROS production. * P < 0.05 (n = 5 independent experiments).

In this study, we established a mouse model of cardiac hypertrophy using TAC method and found that NaHS treatment could significantly attenuate myocardial hypertrophy and regulate the expression of hypertrophy-associated genes in TAC mice. In addition, we also found that endogenous generation of H2S and CSE expression were remarkably decreased in hypertrophic mice, while exogenous supplement of NaHS increased H2S levels in the myocardial tissue.

Cardiac hypertrophy is a critical component of phenotype in the failing heart. In recent years, accumulating evidence has demonstrated that oxidative stress plays important roles in the pathogenesis of myocardial hypertrophy either in response to chronic pressure overload or neurohumoral stimuli. In cultured myocardial cells, hypertrophy induced by angiotensin II, endothelin 1 or norepinephrine was found to be associated with increased ROS generation [10]. The potential mechanisms involved include ROS-induced activation of mitogen activated protein kinases and nuclear factor-κB. In pressure overload-mediated cardiac hypertrophy, NADPH oxidase existing in myocardial cells is the main source of ROS production and may result in various pathophysiological changes such as the activation of redox enzyme and progression to ventricular remodeling [11].

In the present study, oxidative stress was evaluated by detecting MDA, SOD, GSH-Px and ROS in the myocardium. Our findings revealed that ROS generation was significantly increased in the mouse model of cardiac hypertrophy. In addition, H2S was found to significantly attenuate oxidative stress in the myocardium of hypertrophic mice, which might be a critical protective mechanism against TAC-induced myocardial hypertrophy.

Nrf2 is an important regulator of endogenous antioxidant systems. Under normal conditions, Nrf2 locates in the cytoplasm and binds with Keap1 to mediate a rapid ubiquitination and degradation of Nrf2 by the proteasome. In response to oxidative stress, Nrf2 is released from Keap1 and transfers into the nucleus to correlate with ARE in the promoters of antioxidant enzyme regulatory genes [12]. In the present study, H2S was found to enhance the binding activity of Nrf2-ARE and increase the protein expression of antioxidant enzymes HO-1 and GCLM, which consequently augments the resistance to oxidative stress in the hypertrophic mice.

PI3K is a lipid kinase and generates PI(3,4,5)P3, which is a second messenger critical for the translocation of Akt to the cytoplasmic membrane. The activated Akt kinase plays crucial roles in various cellular functions such as cellular survival and proliferation by phosphorylating a number of substrates, including Ikappa B kinase, Bad, caspase-9 and forkhead transcription factors [13]. In the present study, our results suggested that PI3K/Akt signaling was suppressed in the myocardium of hypertrophic mice, while exogenous administration of NaHS was found to activate PI3K/Akt pathway.

To verify whether H2S regulates Nrf2 via PI3K/Akt-dependent pathway, we transfected cardiomyocytes with PI3K siRNA and then subjected them to Ang-II and NaHS. Our results revealed that suppression of PI3K/Akt signaling was associated with reduced nuclear accumulation of Nrf2 and elevated ROS production in cardiomyocytes treated with NaHS and Ang-II, which suggests that H2S could attenuate oxidative stress via PI3K/Akt-dependent activation of Nrf2 pathway.

In summary, our study reveals that H2S protects against TAC-induced cardiac hypertrophy by attenuating oxidative stress. The antioxidant roles of H2S in myocardial hypertrophy probably depend on the activation of PI3K/Akt pathway, which consequently increases Nrf2 activity and HO-1 and GCLM expression.

All experiments were carried out in accordance with the Guide for the Care and Use of Laboratory Animals. The TAC surgery was performed on 8 weeks old male C57BL/6 mice as previously described [14]. The sham group underwent a sham operation involving thoracotomy and aortic dissection without constriction of the aorta. The mice were divided into 4 groups: Sham group, TAC group, TAC+NaHS group (TAC mice were intraperitoneally administered with NaHS solution at a dose of 15μmol/kg/day) and NaHS group (sham mice were intraperitoneally administered with NaHS solution). After 4 weeks, animals were sacrificed by cervical dislocation, and the hearts were harvested for analysis.

Neonatal ventricular myocytes were isolated from 1-2 days old mice. Briefly, myocardial tissue was surgically removed and then dispersed in a series of incubations at 37°C in D-Hanks buffered solution containing 1.2 mg/mL pancreatin and 0.14 mg/mL collagenase (GIBCO, USA). After centrifugation, the cells were suspended in Dulbecco’s modified Eagle medium/F-12 (GIBCO, USA) containing 10% heat-inactivated foetal bovine serum, 100 U/ml penicillin, 100 μg/ml streptomycin, and 0.1 mM bromodeoxyuridine. The dissociated cells were preplated at 37°C for 1 h to separate cardiomyocytes by adherence of cardiac fibroblasts. The cardiomyocytes were then collected and diluted to 1×106 cells/ml and plated in 1% gelatin-coated culture dishes.

The H2S levels in myocardial tissue were measured by the methylene blue method which was described by Zhou et al. [15]. This method is based on the reaction of sulfide with N,N-dimethyl-p-phenylenediamine, in a ferric chloride catalyzed reaction with a 1:2 stoichiometric ratio to give the methylene blue dye, which is detected by spectrophotometry.

Left ventricular tissue was fixed in 10% buffered formalin, embedded in paraffin, and sliced into 5-μm-thick sections. Slides were stained with hematoxylin-eosin (HE) and observed under a light microscope. Myocyte cross-sectional area (CSA) was measured using Pro Plus 6.0 image analysis software.

Cardiomyocytes were seeded into 6-well plates for 24h and then transfected with NF-E2-related factor 2 (Nrf2) or PI3-kinase (PI3K) siRNA using Lipofectamine 2000 reagents. Subsequently, the cells were treated with angiotensin II (Ang-II) for 30 min after incubated with or without NaHS (100 μM).

The samples were homogenized in 0.1% SDS buffer and the lysates were centrifuged at 12,000 rpm for 15 min. The supernatant was collected and the protein concentration was determined. The extracted protein was separated on SDS-PAGE gel and transferred onto PVDF membrane (Millipore, USA). The membrane was blocked with 5% bovine serum albumin for 1h to reduce non-specific binding. Then, the blot was incubated with the primary antibody for 12h at 4°C. The antibodies used in this study were purchased from Cell Signaling Technology. After washing, the blot was incubated with HRP-conjugated secondary antibody (Santa Cruz, USA) for 1h at room temperature. Finally, the signal was detected using the enhanced chemiluminescence kit (Amersham Biosciences).