The expression measurements of thousands of genes are correlated with the proportions of tumor epithelial cell (PTEC) in clinical samples. Thus, for a tumor diagnostic or prognostic signature based on a summarization of expression levels of the signature genes, the risk score for a patient may dependent on the tumor tissues sampled from different tumor sites with diverse PTEC for the same patient. Here, we proposed that the within-samples relative expression orderings (REOs) based gene pairs signatures should be insensitive to PTEC variations. Firstly, by analysis of paired tumor epithelial cell and stromal cell microdissected samples from 27 cancer patients, we showed that above 80% of gene pairs had consistent REOs between the two cells, indicating these REOs would be independent of PTEC in cancer tissues. Then, by simulating tumor tissues with different PTEC using each of the 27 paired samples, we showed that about 90% REOs of gene pairs in tumor epithelial cells were maintained in tumor samples even when PTEC decreased to 30%. Especially, the REOs of gene pairs with larger expression differences in tumor epithelial cells tend to be more robust against PTEC variations. Finally, as a case study, we developed a gene pair signature which could robustly distinguish colorectal cancer tissues with various PTEC from normal tissues. We concluded that the REOs-based signatures were robust against PTEC variations.

Several approaches have been proposed to reduce the influence of the PTEC in tumor tissues, including sampling with quality control, using the laser capture microdissection (LCM) technology to isolate pure tumor epithelial cells and using the deconvolution algorithm to estimate gene expression profiles of tumor epithelial cells from bulk tumor tissues. However, all these approaches have critical limitations. For sampling with quality control, the requirement of at least 60% [9] or 70% [10, 11] of tumor epithelial cells in tumor samples is quite rough and the common evaluation method of hematoxylin-eosin staining (HE) is rather subjective and uncertain [12, 13]. In addition, for highly heterogeneous tumors, such as pancreatic adenocarcinoma and diffuse gastric cancer, it is hard to meet the sample quality criteria. The LCM technology can acquire a few pure tumor epithelial cells [14], but the LCM is expensive and time consuming, which makes it difficulty to be widely used in clinical settings. Although several deconvolution algorithms have been proposed to decompose gene expression profiles into cell-type specific profiles [15, 16], their applications are limited because the absolute expression measurements of cell-specific signature genes are sensitive to experimental batch effects [17].

In general, experimental batch effects make a major barrier to the application of the type of prognostic signatures based on risk scores summarized from the expression level measurements of signature genes. Especially, current data normalization algorithms for adjusting batch effects will introduce substantial uncertainty for the prognostic prediction of patients [18] and the classification of patients into known disease subtypes [19], depending on risk or subtype composition of the samples adopted for normalization together. In contrast, another type of prognostic signatures is based on the relative expression orderings (REOs) of gene pairs within individual samples, which is robust against experimental batch effects and invariant to monotonic data normalization [20-22]. Based on REOs, some methods such as TSP [21], k-TSP [22] and other adjusted methods [19, 23] have been proposed to identify disease signatures, usually based on two categories of patients [24-27]. Recently, avoiding the subjective pre-grouping of samples into high- and low-risk groups, we have employed various tuned or adjusted strategies to identify REOs-based prognostic signatures for specific medical problems of different cancers. The identified REOs-based prognostic signatures for colorectal cancer [28], non-small cell lung cancer [18], ER+ breast cancer [29] and other cancers [30, 31] have been successfully verified in multiple normalization-free data produced by different laboratories, providing strong evidences of the clinical feasibility of this type of prognostic signatures.

In this article, considering that tumor stromal cells and tumor epithelial cells show a mass of similar differential REOs of gene pairs in comparison with their normal controls [32], we supposed that the REOs of gene pairs within individual samples could also be robust against PTEC variations given that the variations are not too large. Using data for colon cancer and breast cancer, we firstly demonstrated that the expression measurements of thousands of genes were significantly correlated with PTEC. Then, we showed that above 80% of all gene pairs had consistent REOs between every paired samples of tumor epithelial and stromal cells microdissected from cancer tissues and thus these REOs would be independent of PTEC in cancer tissues. Afterward, we did simulation experiments to confirm that much more REOs of gene pairs, especially those with larger expression differences in tumor epithelial cells, would remain unchanged in the tumor samples even when the PTEC decreased to as low as 30%. Finally, as a case study, we identified a REOs-based signature which could robustly distinguish colorectal cancer samples with various PTEC from normal tissues. Thus, the REOs-based signatures could be robustly converted to clinical application.

Using 278 colon cancer samples with PTEC data from TCGA, we found the expression measurements of 2271 genes (see Supplementary Table 2) were significantly correlated with PTEC (Spearman correlation analysis, FDR<10%). Similarly, using 1076 TCGA samples with PTEC data for breast cancer, we found 2309 genes (see Supplementary Table 2) that their expression measurements were significantly correlated with PTEC (Spearman correlation analysis, FDR<10%). Notably, 840 of the genes correlated with PTEC in the colon tumor samples were also correlated with PTEC in the breast cancer samples, of which 98.81% had the same positive or negative correlation coefficients with PTEC in the two types of cancer tissues. The KEGG functional pathway enrichment analysis showed that these overlapped genes were significantly enriched in 13 pathways, including “Tyrosine metabolism”, “Focal adhesion” and some signaling ways (Supplementary Table 3), which could reflect the functional difference between tumor epithelial cells and tumor stromal cells [8, 32].

REOs of gene pairs are highly robust against PTEC variations 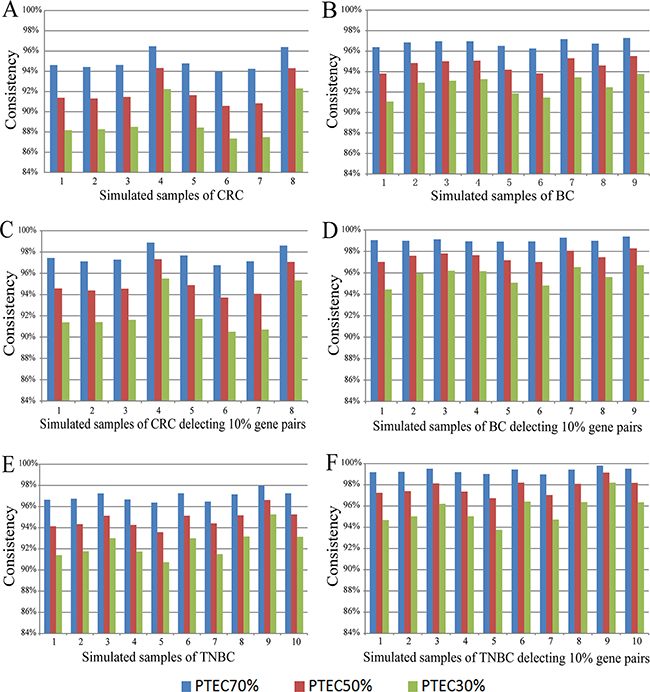 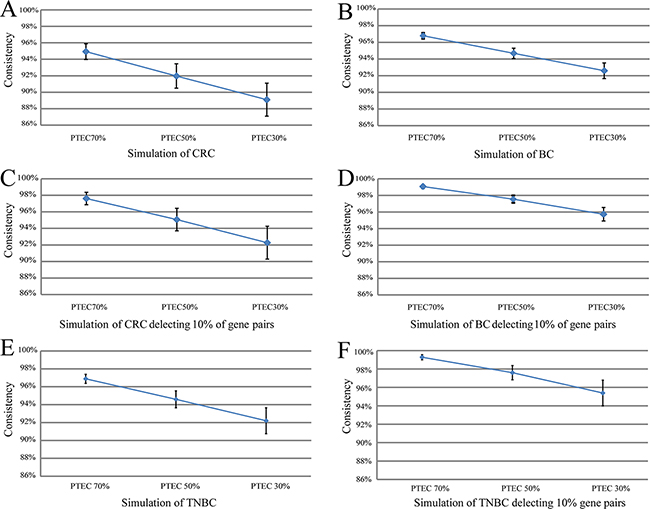 The above results showed that REOs of gene pairs are robust against PTEC variations, indicating that REOs-based tumor transcriptional signatures will be highly likely to be applicable when the sample quality is quite low. As a case study, we developed a gene pair signature to distinguish colorectal cancer samples from normal samples measured by different laboratories. 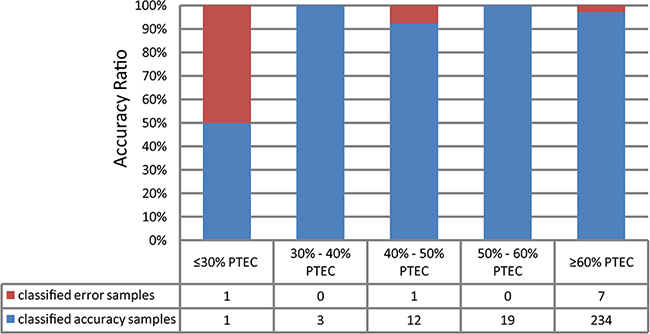 Figure 4: The validation rate binned by tumor cellularity for the tumor/normal signature validation on the 278 TCGA samples.

Table 1: The prediction accuracies for the validation data

The robustness of REOs-based signatures against PTEC variations in clinical tumor tissues makes this type of signatures being more feasible to clinical application. Arguably, some subtle quantitative information of gene expression could be lost when gene expression levels are translated into REOs. However, the subtle quantitative information of gene expressions measured by current high-throughput as well as low-throughput biotechnologies is in fact quite error-prone and uncertain due to the serious problem of experimental batch effects [17] and data normalizations [38, 39]. In contrast, the type of REOs–based signatures are insensitive to batch effects and data normalizations [21, 22] and thus could provide more accurate patient-specific information for clinical applications [40]. In addition, different from the traditional risk-score based signatures, the REOs–based signatures could perform robustly in low quality disease samples such like the samples with low PTEC, as demonstrated in this study, and the disease samples (including formalin-fixed paraffin-embedded samples) with certain RNA degradation [41]. Taking these practical factors into consideration, we believe that it should be definitely necessary to develop the REOs-based signatures for all important cancer types, aiming at ultimately developing clinically feasible signatures for personalized cancer diagnoses or prognoses.

All datasets analyzed in this research were downloaded from the Gene Expression Omnibus (GEO, http://www.ncbi.nlm.nih.gov/geo/) and The Cancer Genome Atlas (TCGA, http://cancergenome.nih.gov/), as described in detail in Table 2. The MBatch expression profiles with batch effects adjustment for two cancers types (colon and breast cancer) were download from the TCGA MBatch Web Portal (http://bioinformatics.mdanderson.org/tcgambatch/) [42] and the clinical information for each sample was downloaded from the TCGA data portal, they were used to detected the genes significantly correlated with PTEC. For the same solid tumor tissue sample (01A) with multiple slide information of ‘percentage of tumor cells’, we used the mean [43] of percentage of tumor cells within multiple slides in performing Spearman correlation analysis and if the information of ‘percentage of tumor cells’ in one of multiple slides was unavailable, the samples would be deleted.

Table 2: The datasets analyzed in the study

The eight paired colorectal tumor epithelial cells and stromal cells microdissected samples from the GSE31279 dataset and the nine paired tumor epithelial cells and stromal cells of invasive breast cancer microdissected samples from the GSE14548 dataset were used to simulate the clinical tumor tissues with different PTEC, respectively. The other datasets except GSE35602 were used to train and validate the signature. The raw data (.CEL files) from each dataset measured by the Affymetrix platform was processed using the Robust Multi-array Average (RMA) algorithm [44]. For the data measured by the Illumina and Agilent platforms, the processed expression profiles were directly downloaded. Every Probe-set ID was mapped to an Entrez gene ID with the corresponding platform files. If multiple probe-sets were mapped to the same gene, the mean of multiple probe-sets was the expression value for the gene. Probe-set IDs with no corresponding to Entrez gene ID or Probe-set IDs that corresponding to more than one Entrez gene ID were deleted. And the other mRNA-seq profiles of level 3 measured by RNA-sequencing platform were downloaded from the TCGA web portal.

The Spearman correlation analysis was used to assess the correlation between genes expression measurements and PTEC. The Student’s t-test was used to detect DEGs between tumor epithelial cells and stromal cells. In the article, all P values were adjusted using Benjamini-Hochberg (BH) procedure [45] and the false discovery rate (FDR) was less than 10%.

If the expression level of a gene was positively (or negatively) correlated with PTEC and correspondingly up-regulated (or down-regulated) in tumor epithelial cells versus tumor stromal cells, then we defined that the two observations were concordant, indicating that the observed correlation could be explained by the differential gene expression between the two types of cells. If k genes were both correlated with PTEC and differentially expressed between tumor epithelial cells versus tumor stromal cells, among which s genes had concordant observations, then the concordance score was calculated as s/k. The probability of observing the concordance score by chance was calculated by the cumulative binomial distribution model as following:

where Pe=0.5 is the probability of one gene having concordant observation in two types of gene lists by chance.

Based on each paired profiles of tumor epithelial cells profiles and stromal cells from the same patient, we produced data to simulate the clinical tumor tissues with different PTEC by the equation as following:

Ri and Rj represent the ranks of gene i and j in a sample, respectively, and Rij is the absolute rank difference between the two genes. Here, all the genes in a sample are ranked according to their expression levels in ascending order.

6. Angell H, Galon J. From the immune contexture to the Immunoscore: the role of prognostic and predictive immune markers in cancer. Curr Opin Immunol. 2013; 25:261–67.