Therapeutic role of glutamine in management of radiation enteritis: a meta-analysis of 13 randomized controlled trials

Objective: To systematically evaluate the clinical efficacy of glutamine in treating radiation enteritis in cancer patients treated with radiotherapy.

Methods: Electronic databases including Pubmed, Embase, the Cochrane library, and CNKI were systematically searched, until April 2016. Randomized controlled trials (RCT) of glutamine in the treatment of radiation enteritis in cancer patients were searched, and RevMan 5.3 software was used for Meta-analysis.

Results: A total of 13 RCTs were included, involving 979 patients. The results of meta-analysis showed that the total efficacy of glutamine was higher for patients with radiation enteritis compared with that in control group, however, there was no statistically significant difference(OR = 3.07, 95%CI: 0.79-11.96; P > 0.05). The combined ORs for all 5 grades(from grade 0 to grade 4) of radiation enteritis in patients receiving glutamine were 2.06, 1.35, 0.55, 0.62 and 0.59, respectively(P > 0.05 for all). Glutamine also failed to significantly improve the symptoms of radiation enteritis in terms of tenesmus, abdominal cramping and blood in bowel movement(P > 0.05).

Conclusions: Implementation of glutamine fails to improve the severity and symptoms in patients with radiation enteritis.

Studies showed that the incidences of radiation enteritis ranged from 5% to 20% when using radiation therapy for patients with prostate cancer, colorectal cancer, bladder cancer, cervical cancer, testicular cancer, and uterine cancer [8, 9]. In cancer patients suffering from radiation enteritis, there is increasing need for development of effective and standard radio-protective regimens to recede or minimize the damage caused by radiation. Although the uses of steroids, antidiarrheal agents, amifostine, glutamine, and other agents are reported in studies and showed certain efficacy, currently there are no standard treatments for radiation enteritis [2, 9, 10].

Glutamine is one kind of neutral amino acid with the roles of providing energy source for intestinal endothelial cells and enhancing local bowel immune function [10]. The serum level of glutamine is usually decreased when patients are under stress conditions, such as radiotherapy. As a result, the recovery of the integrity of intestinal tract epithelium is further impaired [8]. Adding external glutamine for patients with radiation enteritis is believed to be beneficial, with the strong evidence provided by the animal studies [11, 12]. However, available clinical data failed to demonstrate the beneficial effect of glutamine during pelvic radiotherapy [2, 6, 10]. In contrary, in China, compound glutamine capsules showed positive effect in eliminating or minimizing incidence of radiation enteritis [3, 7, 13-15]. In this study, we aimed to evaluate the role of glutamine, which has controversial efficacy, for improvement and management of radiation enteritis.

A total of 938 references published between 1990 and 2016 were identified after initial search using combined search terms as described. 847 studies were selected after reviewing of abstracts and titles if they did not meet the criteria mentioned above. 21 potential eligible articles were identified for the following full-text review, with a perfect agreement(k=0.96). Upon further review, 5 articles were excluded as inadequate data and 3 studies were eliminated due to bias of publication or review article. Finally, 13 eligible trials [10, 13-24] were included for this meta-analysis(Figure 1). All studies reported the definition of radiation enteritis and criteria of efficacy for cancer patients receiving pelvic and/or abdominal radiotherapy. The total number of participants involved was 979, ranging from 60 to 129 cases each trial. The age of these patients ranged from 30 to 78 years. The characteristics of retained trials are presented in Table 1. Studies are listed twice if they showed data for both prevention and efficacy of glutamine for radiation enteritis. 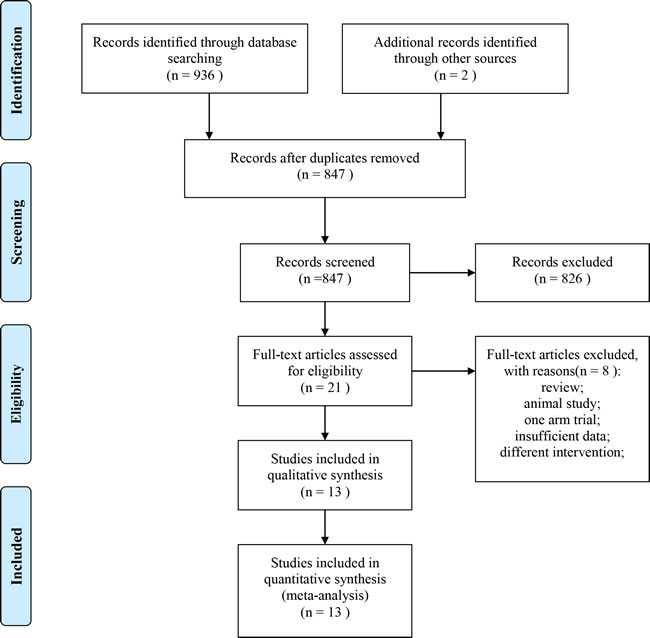 Efficacy of glutamine on radiation enteritis

The result of the summarized estimates were shown in Figures 2. Significant heterogeneity was found among the eligible studies(P<0.05), so the random model was used. Overall, the combined OR for all 7 studies evaluating administration of glutamine on treatment of radiation enteritis was 3.07(95%CI: 0.79-11.96; P>0.05), suggesting that glutamine was beneficial for relieving radiation enteritis, however, there was no statistically significance.

Subgroup analyses were performed to evaluate the relieved degree of radiation enteritis when treated with glutamine. Three degrees of effectiveness were used as following: effective, moderate, and none effective. As illustrated by Figure 3, the combined analyses suggested that administration of glutamine could improve radiation enteritis, though there was no statistically significance(OR=1.60, 95%CI: 0.78-3.28; P=0.2). 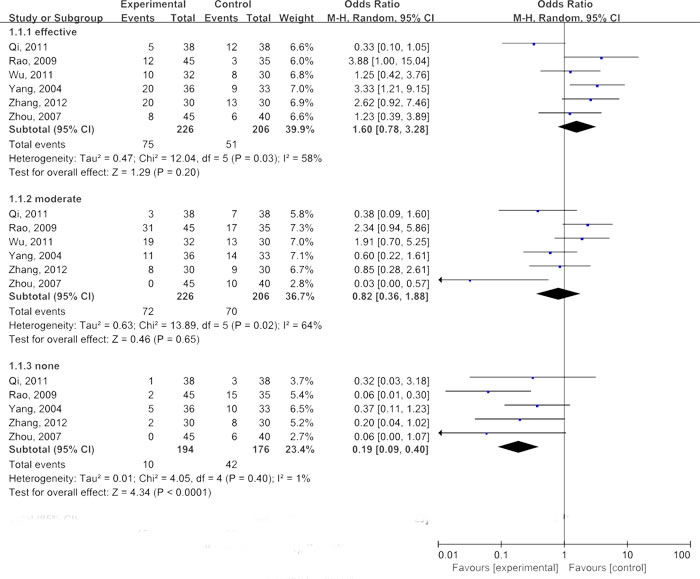 Figure 3: Meta-analyses of glutamine in relieving severity of radiation enteritis. 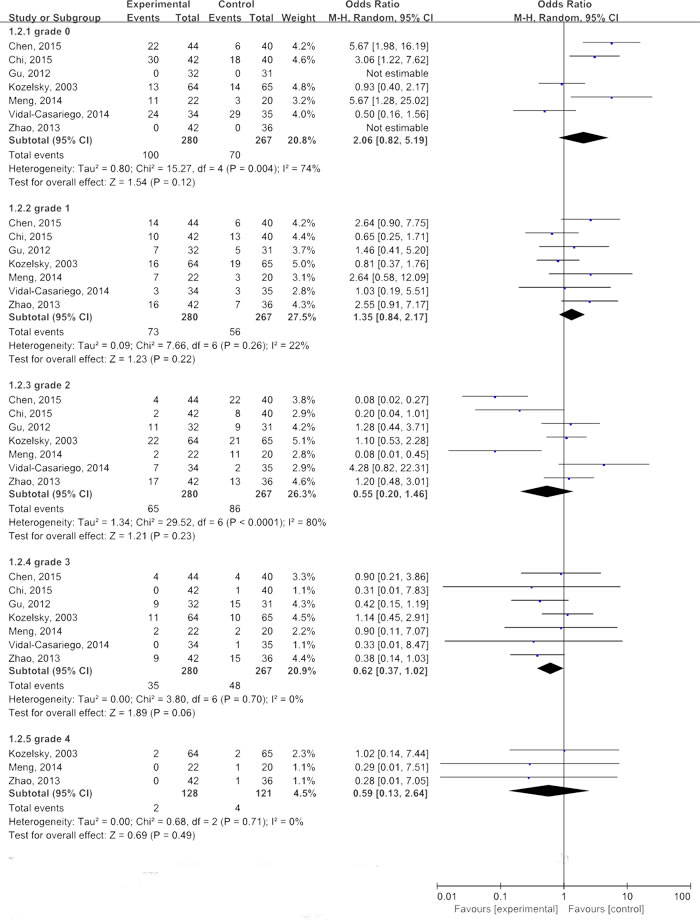 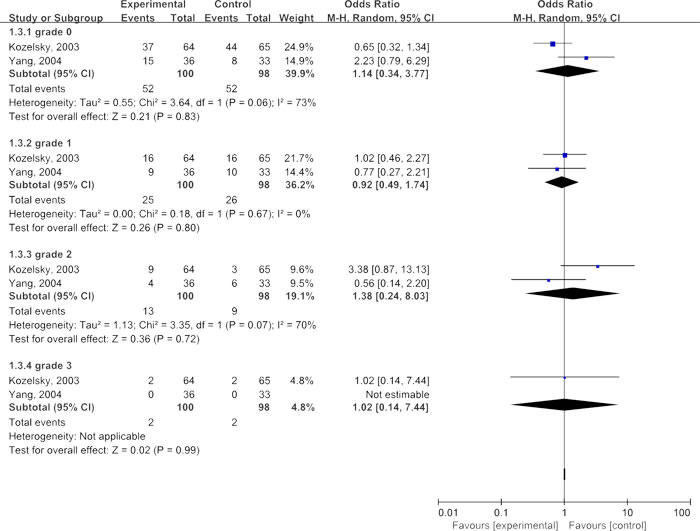 Figure 5: Meta-analyses of glutamine in improving degree of tenesmus. 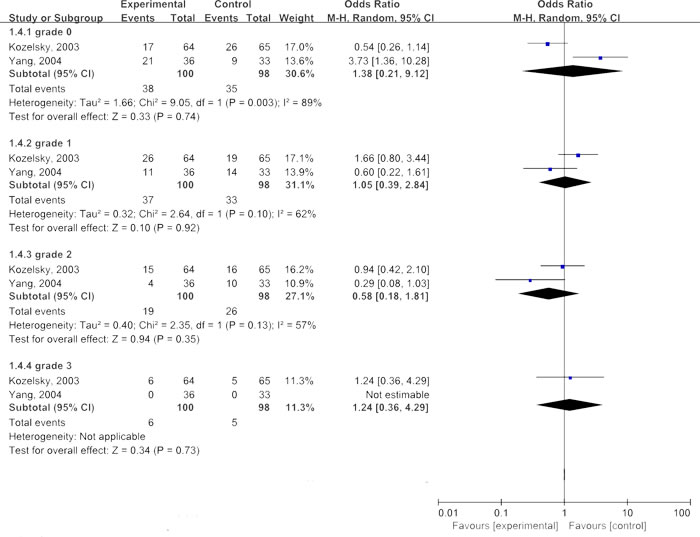 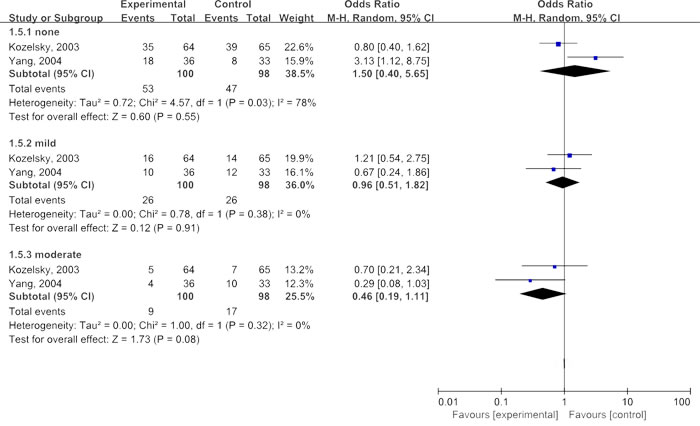 Figure 7: Meta-analyses of glutamine in improving blood in bowel movement. 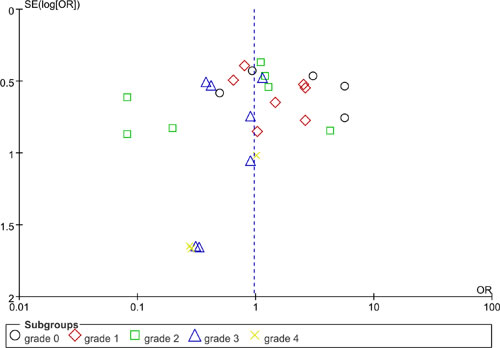 In a previously published meta-analysis [26], the authors assessed nutritional interventions for reducing gastrointestinal toxicity in patients undergoing radical pelvic radiotherapy, they referred nutritional support interventions to standard oral nutrition supplements including amino acid-based supplement and those where novel substrates have been added such as glutamine. They found that there had been benefits demonstrated with dietary modification during pelvic radiotherapy. However, they were unable to determine the effect of elemental diet as data were not available [26]. Our data provided evidence to support the beneficial effect of supplements of glutamine in curing radiation enteritis and were consistent with the results of the clinical studies published in China, however, it lost its significance. Searching, selecting, and quality assessment were conducted independently by two reviewers. Our study also checked heterogeneity and potential bias according to the published guidelines. When removing all of the trials conducted in China, the positive effect of glutamine on radiation enteritis disappeared. This could be explained by the administration of glutamine varied between China and other countries. Most of the studies published in English did not show a positive role of glutamine on radiation enteritis but not chemotherapy induced enteritis [2, 6, 10]. Membrive et. al. [2] conducted a study to determine the effect of glutamine in the prevention of induced enteritis after pelvic radiotherapy, and they found that incidence of diarrhoea observed was similar to published series in which glutamine was not administrated. They concluded that administration of glutamine to patients during pelvic radiotherapy did not appear to reduce the occurrence of enteritis [2]. This was similar with the results of some of the included trials in our meta-analysis.

As glutamine has been a powerful agent in helping recovery from tissue damages, there were several meta-analysis evaluating the therapeutic efficacy of glutamine in other inflammatory diseases, such as Crohn’s disease, critical illness, oral mucositis, and respiratory disease [27-30]. Some of these studies concluded that glutamine could reduce the risk and severity of inflammation compared to either placebo or best supportive care or no treatment [28, 29]. For Crohn’s disease, there was insufficient data to confirm the efficacy and safety of glutamine for induction of remission [27]. With regards to radiation-induced severe oral mucositis, a meta-analysis revealed that glutamine significantly reduced the risk and severity of oral mucositis during radiotherapy or chemotherapy [29]. These different outcomes of glutamine intervention may be due to the site, dose, duration of radiotherapy, and types of cancer and normal tissue, and other associated factors.

There are several limitations in the present meta-analysis. Firstly, though there is no significant heterogeneity among included trials, it is worthy to note that the unpublished negative results were not included in the analysis, increasing the risk of false positive results. Secondary, some of the included studies were low quality with small number of participants and different criteria of efficacy. This may reduce the reliance of the summarized estimates. Thirdly, although all of the included studies were randomized controlled trials, some of them did not mention the randomization methods, blinding, allocation concealment as well as missing data, resulting in high risk of publication and reporting bias. Forth, we planned to perform sub-group analysis according to age, treatment duration, severity of radiation enteritis and other factors. However, it was failed because of insufficient available data and may over-estimate the true efficacy of glutamine. Though these mentioned shortages may lower the reliance of our conclusion, our study systematically assessed the efficacy of glutamine in preventing and treating radiation enteritis. Meanwhile, more elegant clinical trials are welcomed to further determine the effect of glutamine on radiation enteritis in the future.

This review was performed following the instruction of PRISMA. This study had no official registration information.

Randomized clinical trials reporting protective efficacy of glutamine versus placebo in preventing occurrence of radiation enteritis or curative efficacy of glutamine versus placebo in cancer patients with radiation enteritis after receiving pelvic and/or abdominal radiotherapy were included. Language limited to English and/or Chinese. The primary endpoint was overall response rate, calculated by the following formula: overall response rate(%)=(total case - no response case)/ total case×100%. No response was defined as symptoms of radiation enteritis were not relieved or even exacerbated. The secondary endpoint was symptom score. Reports of animal studies were not included. Studies with reduplication, incomplete data reporting, data missing, statistical error and/or efficacy assessed without using standard criteria were also not included.

The search was performed by two authors(De-dong Cao and Min Xu), independently. The titles and abstracts of the identified studies were reviewed, and the potential eligible articles were included for the full-text review. For trials with controversial comments, discussion was applied or third reviewer was introduced to decide whether it should be included or not.

Data extraction and quality assessment were performed by two reviewers(De-dong Cao and Hui-lin Xu), independently. Baseline characteristics of included trials including title, authors, year of publication, journal name, cases, sex, age, interventions for treatment group and control group, definition of efficacy, primary and secondary endpoints were extracted. The obtained data were confirmed by the two authors. If any data mentioned above was not available(NA), it was recorded as NA. As most of the included articles were randomized controlled trials, quality of included studies, referring to randomization, blinding, complete reporting, and other bias, was assessed following the quality control methods in the Cochrane 5.0.1 handbook.

Statistical analysis and synthesis of results

The meta-analysis of included studies was performed using the RevMan 5.3 software provided by the Cochrane collaboration. Eligible studies with efficacy data were included, and relative risk(RR) and its 95% confidence intervals(95%CI) with regarding to overall response rate(ORR) and symptom score were used for the overall analysis. If the ORR and other endpoints could not be directly extracted from the primary articles, it would be calculated manually. The χ2 test was introduced and inconsistency value(I2) was calculated to detect heterogeneity between eligible trials according to the Peto’s method. The fixed effect model was used when the heterogeneity between studies was moderate(P<0.1, 30%<I2<50%) or not important(P<0.1, 0%<I2<40%), whereas the random effect model or sub-group analysis was applied if the heterogeneity was significant(P<0.1, I2>50%). Here, we define the heterogeneity was moderate with the I2 ranged from 30% to 50%, but not 60% mentioned by the handbook 5.1.0 [25]. The pooled effect of glutamine on preventing or curing radiation enteritis was defined to be statistically significant if the P<0.05.

We thank reviewers for their suggestions.

The authors declared that there were no competing interests related to this study.