Prognostic significance of tumor-associated macrophages in breast cancer: a meta-analysis of the literature

Purpose: Tumor associated macrophages (TAMs) are important prognostic factors and have been proved to be associated with the invasion and migration of various cancer. However, the relationship between TAMs and breast cancer outcomes remains unclear.

Results: OS and DFS were correlated with high density of TAMs with HR= 1.504(1.200, 1.884)/ 2.228(1.716, 2.892) respectively. And subgroup analysis of location and biomarker in OS and DFS group showed prognosis was associated with TAMs distribution and biomarker selection. Besides, TAMs high infiltration was significantly related to age, size, histologic grade, ER/PR status, basal phenotype and vascular invasion.

Breast cancer is the most frequent cancer in female. In recent years, with the trend of younger age and increasing morbidity, it threatens the health of women seriously, but the mechanism isn’t clear [1, 2]. Breast cancer has obvious heterogeneity on molecular phenotype, tissue pathology and clinical characteristics. Nowadays, the focus of treatment strategy is using chemotherapy to induce tumor cell apoptosis, resistance to hormone receptor and targeted therapy. Meanwhile, growing evidence has demonstrated the important role of tumor microenvironment in the development of cancer and the treatment aim at interfering the microenvironment and metabolism stimulation has gained clinical utility [3-5]

Macrophage is a main kind of immune cell infiltrating to tumor microenvironment and it can change its phenotype according to the signal stimulation of microenvironment. TAMs are generally characterized by the expression of cell surface marker CD68 [6]. Macrophages can be divided into classically activated M1 and selectively activated M2 [7, 8]. M1 macrophages are induced by TLR (toll like receptor) and IFN-γ, expressing high level of CD86, CD40 and PD-L1 and play the role of pro-inflammatory and anti-tumor response [9]. While M2 is totally different, they are characterized by the expression of CD163, CD206, CD204 and arginase-1, secreting IL-10 and TGF-β, expressing VEGF (vascular endothelial growth factor) and promoting both the activation of tumor related regulatory T cells and matrix formation, all of which promote tumor progression [10-12].

Plentiful studies have confirmed that TAMs are associated with poor outcome of human cancer, such as hepatoma, gastric cancer, lung cancer and so on [13-16]. However, other studies have opposite reports [17]. Studies reveal that macrophage subtype, location, density are all in correlation with cancer survival [18, 19]. For breast cancer, studies have shown that density of TAMs is related to hormone receptor status, stage, lymph node metastasis and poor prognosis [2, 18-21]. However, further studies are needed to clarify the influence of TAMs including the role of intratumoral distribution and surface marker selection. Therefore, we conducted a detailed meta-analysis summarizing the related evidence to evaluate the prognostic value of TAMs in human breast cancer.

The characteristics of included study containing OS, DFS, RFS, BCSS data were listed in Table 1. There are 4541 patients in total of included studies. And the sample size for OS, DFS, RFS, BCSS was 1699, 916, 1593, 1634 separately. All the studies used IHC staining in formalin-fixed paraffin-embedded tissue blocks to evaluate TAMs biomarker expression. When evaluating TAM density, 50% studies performed blinded and independent reading. Cut-off value for definition of TAMs density low versus high could be retrieved from 15 articles (Table1). 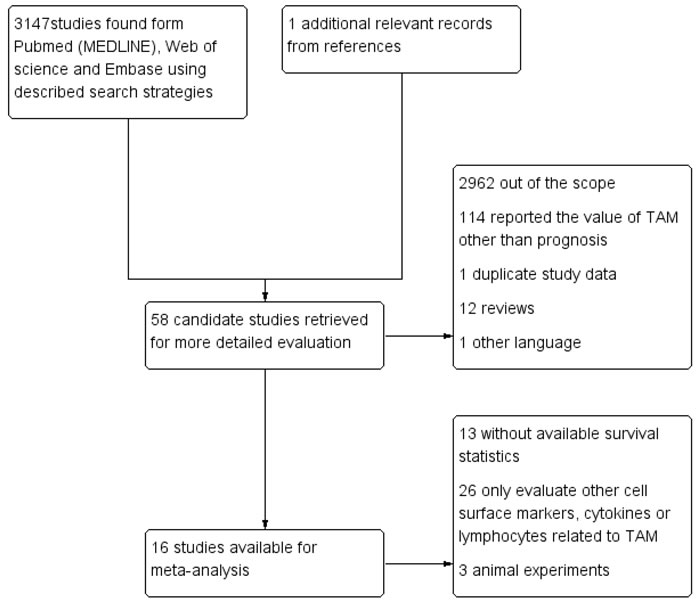 The introduction of the antibodies and definition method of TAMs of included studies were shown in Table 1. 15 studies used CD68, 4 studies used CD163 and only one study used CD206 and CD40. Of all the studies using CD68, 18.75% using CD68+/PCNA+.

Table 1: Characteristics of the eligible studies. 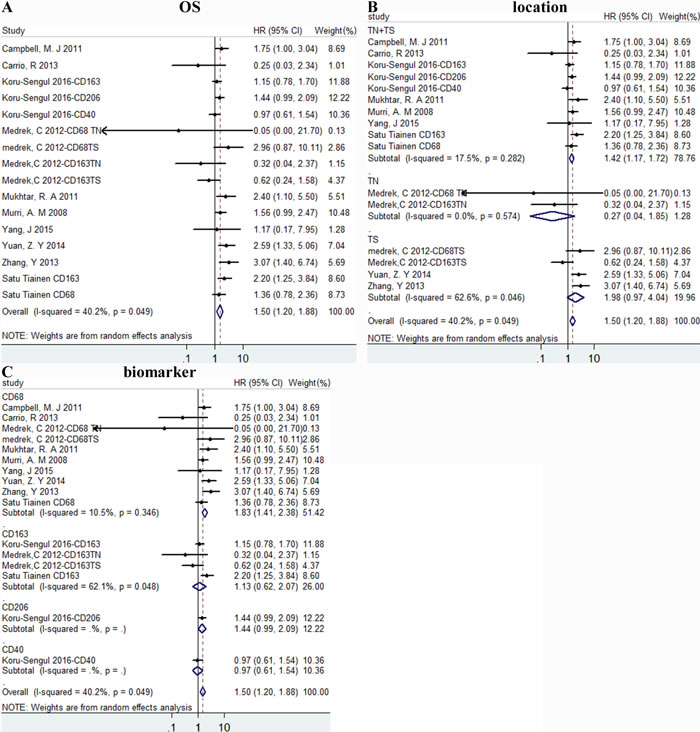 Figure 2: The forest plots of HRs for OS. Forest plots and meta-analysis of studies evaluating HRs of high TAM counts as compared to low counts. Survival data were reported as OS A., as well as subgroup analysis of location B. and biomarker C. among included studies. TN: tumor nest; TS: tumor stroma. 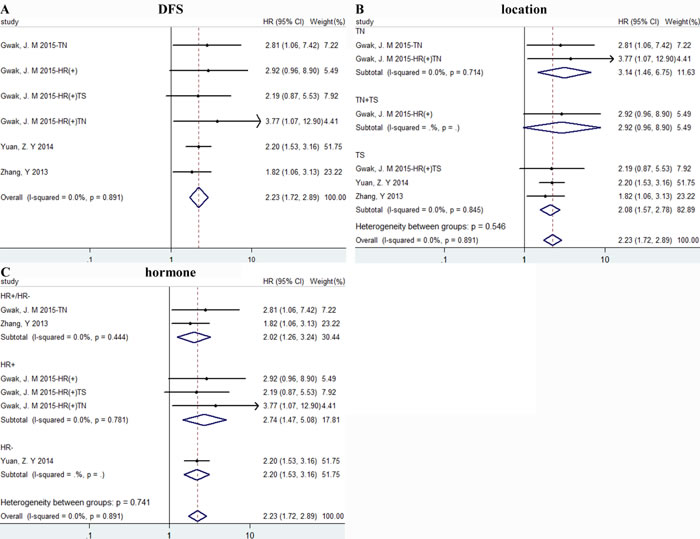 Figure 3: The forest plots of HRs for DFS. Forest plots and meta-analysis of studies evaluating HRs of high TAM counts as compared to low counts. Survival data were reported as DFS A., as well as subgroup analysis of the location B. and hormone status C. of included studies. TN: tumor nest; TS: tumor stroma.

We didn’t find relationship between TAMs density and RFS, with HR = 1.799 (0.972, 3.330), I2 = 82.5% (Figure 4A). Then subgroup analysis was conducted to find the origin of heterogeneity. According to location of TAMs, we divided our studies into three groups: TS, TN+TS, TN. However, because of different biomarker, hormone status within these studies, it’s hard to eliminate heterogeneity (Figure 4B).

Figure 4: The forest plots of HRs for RFS. Forest plots and meta-analysis of studies evaluating HRs of high TAM counts as compared to low counts. Survival data were reported as RFS A., as well as subgroup analysis of the location B. Abbreviations: TN: tumor nest; TS: tumor stroma.

Figure 5: The forest plots of HRs for BCSS. Forest plots and meta-analysis of studies evaluating HRs of high TAM counts as compared to low counts. Survival data were reported as BCSS A., as well as subgroup analysis of the location B. Abbreviations: TN: tumor nest; TS: tumor stroma. 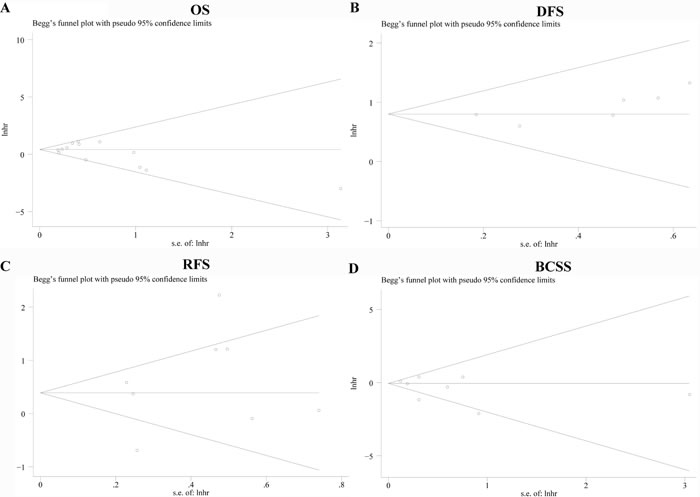 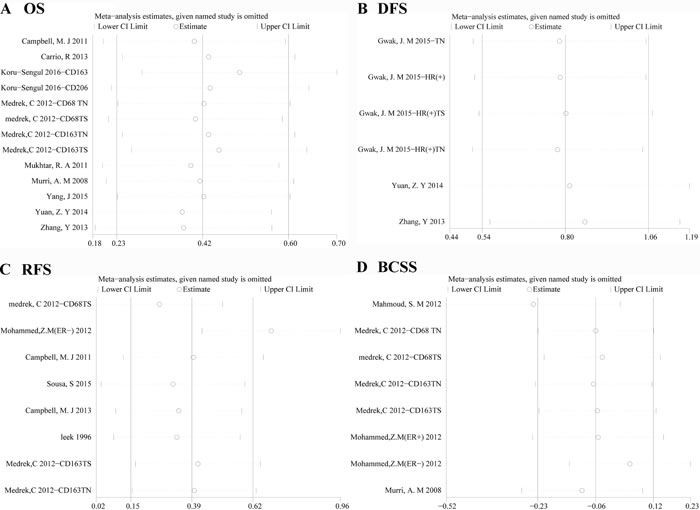 Figure 7: Sensitivity for included studies. The effect of single study was evaluated on the whole results of OS A., DFS B., RFS C., BCSS D. in this meta-analysis.

Mountains of studies have illustrated the role of TAMs in cancer initiation and progression [2, 4, 22-24]. But the pertinence between TAMs and outcomes of breast cancer hasn’t been illuminated. In our meta-analysis, we chose OS, DFS, RFS and BCSS to assess risk of high macrophage density. Moreover, we analyzed the correlation between clinicopathological features and TAMs infiltration and found high TAMs infiltration was related to both poor survival rates and malignant biological behavior.

Our meta-analysis of 16 studies with 4541 patients in total shown that high density of TAMs was related to worse OS and DFS. What’s more, we found that the prognostic significance of TAMs was affected by different biomarker, TAMs location and ER receptor status. High density of TAMs was related to poor prognosis and subgroup analysis showed that CD68 was better than M2 specific marker CD163 and CD206 alone in predicting OS. And results of subgroup analysis of location shown both TN+TS and TS group signified worse OS, while there was no difference of TAMs in TN group. All the results indicated that CD68 and TAMs in tumor stroma were strongly associated with worse OS. For DFS, high density of TAMs had the similar prognostic significance as OS outcome.

Results of elevated TAMs of RFS shown no obvious correlation. And the sensitivity analysis shown the exclusion of study of “Mohammed,Z.M(ER-) 2012” obviously affect the association between TAMs density and RFS. This article mentioned above reported an improved recurrence-free survival of CD68 TAMs in ER- breast cancer, which was opposite to some other studies [25-27]. With regard to BCSS, results showed no statistical significance, HR = 0.95(0.79,1.13). So far, the reasons for such discrepancies using similar methodology are unclear, however, some evidence declares macrophage markers, such as CD68 may be expressed by other non-myeloid tissues in cancer [28]. Besides, the heterogeneity of RFS and BCSS is considerable, maybe the results should be considered cautiously.

This study has some important implications in breast cancer. Firstly, it demonstrates high TAMs are related to worse outcome, which indicates that TAMs may be a potential therapeutic target. Secondly, it shows the tissue distribution and CD68 biomarker of TAMs has an important role in prognostic prediction.

There are also limitations in this meta-analysis. First of all, the markers and cut-off values for assessing TAMs expression of individual studies are inconsistent and cut-off value may be a source of considerable interstudy heterogeneity. Besides, although Begg’s and Egger’s test were performed and there was no statistical significance. Results should be interpreted cautiously because we only include studies with available HR value or K-M survival curves with necessary data.

In short, our analyses show that high density of TAMs in breast cancer tissues, especially CD68+ TAMs in tumor stroma, is associated with worse prognosis in human breast cancer. As main kind infiltrating cells in tumor microenvironment, TAMs have a close relationship with tumor cells by direct or indirect function [29]. Some factors secreted by TAMs also been reported to be correlated with poor prognosis [30, 31]. Targeted therapies directly targeting TAMs, or reprogramming TAMs to M1phenotype could be promising in improving survival rates of breast cancer patients.

This meta-analysis was conducted according to PRISMA guidelines. We searched PubMed (MEDLINE), Web of science and Embase from their inception until July 1, 2016 and the records and results are shown in Figure 1. The following Mesh Terms or key words were used in the search: “cancer’’, “tumor’’, “neoplasm’’, ‘‘carcinoma’’, ‘‘macrophages’’ and “breast cancer”. The language was restricted to English. The references from identified articles were manually searched for additional relevant records.

Inclusion criteria for primary studies were as follows:(1) proven diagnosis of breast cancer by pathology ; (2) without previous cancer history; (3) evaluating TAMs by CD68, CD206, CD163 using immunochemistry; (4) reporting the correlation of TAMs with OS, DFS, RFS, BCSS and clinicopathological features; (5) full-text studies published in English. Only articles conforming to all the five conditions above were selected, or they would be excluded. Two authors (ZXX and QJK) independently extracted all data. If there were disagreements, we solved by reaching a consensus or discussion with a third investigator. The names of authors and the medical centers involved were examined in each publication to avoid repeated data. The quality of included studies was assessed by using the Newcastle-Ottawa Scale checklist (NOS).

Included studies were divided into four groups for analysis: OS, DFS, RFS and BCSS. To integrate survival results, data of TAMs density of survival in individual study was extracted by estimating HRs and 95% confidence interval values. Firstly, we searched original article to get HRs and 95% CI. If data were only available in the form of figures, we read Kaplan-Meier curves by Engauge Digitizer version 4.1 (free software downloaded from http://sourceforge.net) and extracted survival data HRs and 95%CI [32]. Moreover, data of clinicopathological features was extracted in study available by estimating ORs. The heterogeneity of included studies across the results was assessed by using I2 statistics and P value, and if I2 > 50% or P < 0.1, the results was considered statistically significant and random-effects models are employed. If P≥0.1 and I2 ≤ 50%, fixed-effects models are employed. If the 95% CI didn’t overlap 1, or P < 0.05, results would be considered statistically significant. Statistical analyses were performed using Stata 13.0 (Stata Corporation, College Station, TX).

We carried out sensitivity analysis, also named influence analysis, to evaluate the effect of single study on the whole results and meanwhile try to find the origin of heterogeneity for each survival outcome group.

This study was supported by grants from National Natural Science Foundation of China (NO.81274136).

11. Sica A, Invernizzi P, Mantovani A. Macrophage plasticity and polarization in liver homeostasis and pathology. Hepatology. 2014; 59:2034–42.