Effect of age on long-term outcomes after stroke with atrial fibrillation: a hospital-based follow-up study in China

Stroke is the leading cause of death and disability in both developed and developing countries worldwide [1-3]. The incidence of stroke has declined or plateaued in developed countries [4-6], but it has dramatically increased in developing countries, especially in China [7-9]. Although there had been a trend toward the occurrence of incident stroke later in life in the past two decades, the proportion of stroke burden is greater overall in individuals <75 years than in those who are older, especially in low-income and middle-income regions [10].

Atrial fibrillation (AF) is the most common sustained cardiac arrhythmia, which is an established risk factor for ischemic stroke [11, 12]. The prevalence of AF in the general population increases substantially with age, ranging from 0.1% in those aged <55 years to 9% in those aged ≥80 years [13]. Although there is a low prevalence of AF in China, the disease burden of AF-related stroke is great due to the aging population. 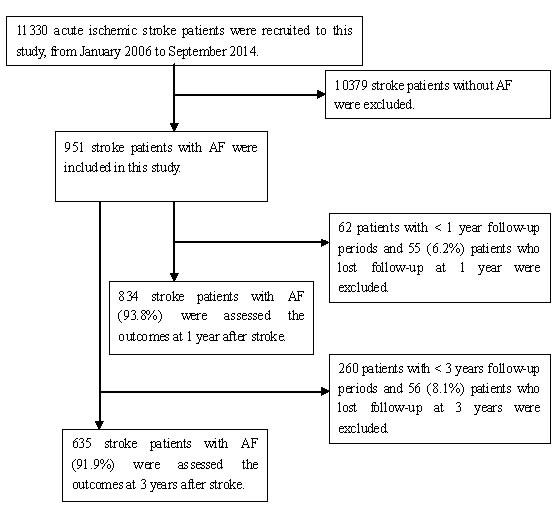 Differences in clinical features between groups

Table 1: Clinical features and previous history of diseases in patients with ischemic stroke and AF by age group

Differences in stroke risk factors and lifestyle factors between groups

There were no obvious differences in the prevalence of hypertension, DM, dyslipidemia, obesity, and current smoking, but there was a higher frequency of alcohol consumption in the younger group than in the elderly group (10.4% vs. 5.0%, P = 0.002) (Table 2).

Table 2: Clinical features and previous history of diseases in patients with ischemic stroke and AF by age group

Table 3: Outcomes and odds ratios 1 year and 3 years after stroke among patients with AF by age group

This is the first report on the effects of age on long-term outcomes among stroke patients with AF in China. We compared differences in clinical features, conventional stroke risk factors, and outcomes at 1 year and 3 years after stroke between younger and elderly patients.

Previous studies indicated that stroke patients with AF were less likely than stroke patients without AF to have conventional risk factors for stroke, including hypertension, current smoking and alcohol consumption habits, and diabetes [21, 22]. Other studies reported significant differences in the frequency of conventional stroke risk factors [23]. The present study focused on patients with stroke and AF and showed that the prevalence of hypertension, diabetes, dyslipidemias, arterial stenosis, obesity, and current smoking were not significantly different between the two age groups. However, the frequency of alcohol consumption was greater in the younger group than in the elderly group. At the same time, we did not observe any differences in the levels of TC, TG, HDL-C, LDL-C, FG, and HbA1c between the younger and elderly groups. These results indicate that there is not an obvious relationship between age and the prevalence of conventional risk factors in stroke patients with AF.

Moreover, there were several limitations in this study. First, this study used a local stroke registry, and all patients were recruited from same city; thus, limited representation occurred. Second, patients who died before admission to the stroke unit and those lost to follow-up were excluded in this study, so poor outcomes may be underestimated. Third, pre-stroke data were lacking, including treatment and medicine use for AF.

In this large hospital-based stroke registry, we compared differences in clinical features, risk factors, and outcomes at 1 and 3 years following AF-associated stroke between younger and elderly patients. There was a higher prevalence of AF in the elderly group than in the younger group. The prevalence of hypertension, DM, dyslipidemia, artery stenosis, obesity, and current smoking were not obviously different between the two groups, but there was a higher frequency of alcohol drinking in the younger group. Poorer long-term outcomes were observed in the elderly group. There was an incremental risk of mortality and dependency at 1 and 3 years after stroke in the elderly group. These findings suggest that elderly stroke patients, especially those with AF, should be targeted for secondary stroke prevention to reduce the burden due to stroke in China.

This was a hospital-based follow-up study using the Stroke Registry System. All consecutive patients with acute ischemic stroke admitted to the stroke unit within 72 hours of stroke onset in three hospitals in Tianjin, China, between January 2006 and September 2014 were recruited to this study. All patients were diagnosed according to World Health Organization criteria confirmed via brain computed tomography (CT) or magnetic resonance imaging (MRI) [35]. Patients experiencing transient ischemic attack were excluded from this study. Trained neurologists selected detailed information for patients with acute ischemic stroke, including ischemic stroke subtype, stroke severity, previous medical history, lifestyle factors, and outcomes at 1 year and 3 years after stroke.

To ensure data quality, three groups of senior trained neurologists (the assessment group, the follow-up group, and the quality control group) were responsible for determining the nervous system score at admission, for the reexamination (including of neurological score, risk factor management, and directing the treatment and rehabilitation) during follow-up, and a sampled confirmation of 20% of all patients each month, respectively.

All investigative protocols were approved by the ethics committee of Tianjin Medical University General Hospital. The methods were carried out in accordance with approved guidelines, and informed consent was obtained from each patient.

Outcomes after stroke were described by mortality, recurrence, and dependency at 1 and 3 years after stroke. Outcomes were assessed with both face-to-face and telephone follow-up. Death was defined as all-cause cumulative death in corresponding periods after stroke and was determined based on reports from patients’ family members and telephone follow-up. Stroke recurrence was defined as all new-onset vascular events, including stroke, myocardial infarction, and venous thrombosis, 30 days after stroke. Information pertaining to diagnosis and classification of recurrent stroke were obtained from the medical record department in the discharge hospitals. Dependency was defined as an mRS score >2 [20].

All patients with acute ischemic stroke were classified into two groups based on age (<75 years and ≥75 years) for analysis. Continuous variables, including age, NIHSS score, BI, mRS score, and TG, TC, HDL-C, LDL-C, FG, and HbA1c levels were presented as mean (standard deviation) or median (range), as appropriate, and were compared between the two groups using the Student t-test or the Mann-Whitney U-test. Dichotomous variables, including stroke subtype, stroke severity, stroke risk factors, and outcomes over different periods after stroke, were presented as numbers (percentages) and were compared with the chi-squared test. Differences in outcomes between the two groups were assessed with a logistic regression analysis. A multivariate analysis was carried out with a logistic regression model to evaluate differences in outcomes over different periods after stroke, with stroke subtype, stroke severity, risk factors, and lifestyle factors as covariates. Data for this analysis were presented as adjusted odds ratios (ORs) with 95% confidence intervals (CIs). Patients lost to follow-up were excluded from outcome evaluation. All statistical analyses were performed using SPSS version 19.0 (SPSS Inc., Chicago, IL), and a two-tailed P < 0.05 indicated statistical significance.

We thank all participants in this system.

The research was conducted in the absence of any commercial or financial relationships that could be construed as a potential conflict of interest.

This study was funded by Local Key Project of Binhai New District, Tianjin of China, and The Project of Prevention and Treatment System on Cerebrovascular Disease in Dagang Oilfield, China and Tianjin Health Bureau of Science and Technology Fund Key Projects (contract: KY12, and 2013KG120).