Conclusion: The EGFR-TKIs had a modest response for EGFR mutated lung squamous cell carcinoma patients and might be a selective option for those patients.

Squamous cell lung cancer accounts for about 25–30% of NSCLC.[1] Progress in the management of advanced lung squamous cell carcinoma (LSCC) has been lagged behind.[2] For example, pemetrexed monotherapy and platinum-based doublet chemotherapy was not approved in patients with squamous histology because of inferior efficacy.[3] Nonetheless, bevacizumab, the vascular endothelial growth factor (VEGF) inhibitor, was contraindicated in LSCC due to pulmonary hemorrhage [4-6].

In the last decade, the FDA had approved targeted agents as initial treatment for patients with NSCLC, including gefitinib, erlotinib, and afatinib for the patients with EGFR mutations. Recent series including the Lux-Lung 8, [7] a meta-analysis [8] and a review [9] had shown that EGFR-TKIs had a modest therapeutic effect in unselected patients with advanced LSCC, strengthening the potential efficacy of EGFR targeted therapy in EGFR mutated LSCC. Even it has been proved that EGFR-TKIs had a better response in EGFR mutation selected lung adenocarcinoma, whether the EGFR-mutated LSCC patients can benefit more from the EGFR-TKIs remains unclear. However, former pooled frequency of LSCC patients with EGFR mutations was only about 5% both in Asian and non-Asian, [10] which made it difficult to undergo a further investigation by big scale randomized clinical trials.

A total of 71 potential records remained enrolled for full-text assessment after screened from the manual search. Of these, 32 studies were eligible for subsequent pooled analysis (Figure 1). One hundred and ten EGFR mutated LSCC patients with grouped data in the eight studies were assigned as the first-cohort (Table 1). Another forty-four EGFR mutated LSCC patients in 24 studies with individual data and six patients from the Shanghai Chest Hospital database were allocated as the second-cohort (Supplemental Table 1). The flow diagram of inclusion was showed in the Figure 1.

Table 1: The grouped data extracted from eight studies in the first-cohort.

Note: * The 95% CIs were calculated by the Kaplan-Meier method via the data got from the survival curves. 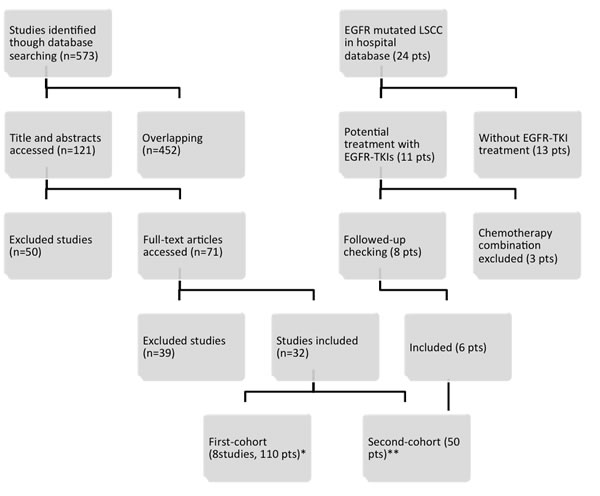 Characteristics of the EGFR mutated LSCC patients in the first-cohort

In the first-cohort, data was extracted in eight retrospective studies (Table 1), [11-18] including a total of 110 LSCC patients with EGFR mutation and 428 LSCC patients with EGFR wild type. Seven (87.5%) of the studies were from East Asia, another one from the Europe. The objective response rate (ORR), disease control rate (DCR), median progression-free survival (PFS) and median overall survival (OS) were available in six, four, eight and five studies. Seven studies contained LSCC patients of the EGFR mutation group and EGFR wild type group.

In the first-cohort, six studies reported the EGFR mutation status in a total of 86 LSCC patients with EGFR mutation. Fifty of them were exon 19 deletion, thirty-four were exon 21 L858R, and two were other types. Patients were treated with erlotinib, gefitinib and icotinib, as recorded in the publications. The response, ORR, DCR, and median PFS and the company 95% CI were extracted and shown in Table 1.

Characteristics of the EGFR mutated LSCC patients in the second-cohort

In the second-cohort (Supplemental Table 1), there were fifty LSCC patients harboring EGFR mutations. [19-42] Most of these patients were form East Asia. The median age was 63 years, ranging from 29 to 80 years old. Thirty-four and eleven patients were male and female, with the gender of other five patients unknown. The number of smoker and non-smoker were 21 and 22, with 7 unknown. The characteristics were shown in Table 2.

Table 2: The characteristics of LSCC with EGFR mutations in the second-cohort.

Combined ORR, DCR and PFS of the first-cohort and second-cohort 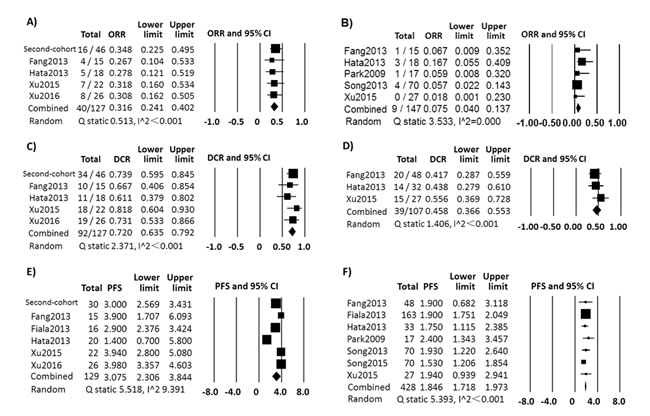 In 2014, Ameratunga et al had underwent a meta analysis on the efficacy of EGFR-TKIs to LSCC, which reveled that EGFR-TKIs had a modest therapeutic effect compared to placebo in unselected LSCC patients.[8] Then, the phase III trial Lux-Lung 8 had shown hat afatinib versus erlotinib as second-line treatment of patients with EGFR mutation unselected advanced LSCC had significant improvements in PFS.[7] However, these trials did not answer that whether EGFR-TKI had a better efficacy in EGFR mutated LSCC patients compared with EGFR wild LSCC patients.

This pooled analysis is by far the most updated and comprehensive analysis of EGFR-TKIs for EGFR mutated LSCC to answer this question. Takehito et al 2010 had revealed that the EGFR-TKI, gefitinib was less effective in non-adenocarcinoma NSCLC with EGFR mutation than lung adenocarcinoma (LADC) harboring EGFR mutation.[45] Our study found that EGFR mutated LSCC patients had prior response to EGFR-TKIs than EGFR wild type LSCC patients, with higher object response rate (31.6% vs. 11.7%), disease control rate (72.0% vs. 42.8%) and longer progression-free survival (3.08 vs. 1.85 months). This modest priority highlighted that EGFR-TKI might be a better option for EGFR mutated LSCC patients than that with EGFR wild type. However, the median PFS was shorter than that in EGFR mutated LADC.

The mechanism of lower response of EGFR-TKI treatment in LSCC patients with EGFR mutation compared to LADC patients harboring EGFR mutation is under reveling. Lee et al had found that high EGFR gene copy number could be as predictive markers for EGFR-TKI in patients with advanced squamous cell lung carcinoma.[46] Another answer was the genomic variety and complexity of LSCC. The Cancer Genome Atlas Research Network had identified the potential therapeutic gene or pathway alteration of squamous cell lung cancers, revealed that the genomic complexities were more common compared with LADC. [47, 48] Moreover, about half of all patients with LSCC carried multiple gene aberrances and 69% of the alternation was in the PI3K/ RTK/RAS signaling pathway, which might affect the efficacy of EGFR-TKI.[47] Zhijie Wang et al reported that the resistance of LSCC harboring EGFR mutation to EGFR-TKI was due to the activation of BMP-BMPR-Smad1/5-p70S6K, [49] and the combination of EGFR-TKI with inhibitors of BMP receptors signaling pathway overcame the resistance. Besides, mutation-independent mechanisms likely also contribute to the observed efficacy of EGFR-TKI therapy.[50]

Recently, the immune therapy targeting in PD-1/PD-L1 pathway had shown its priority than chemotherapy in LADC [51] and LSCC [52, 53]. However, recent pooled analysis found that EGFR mutations and ALK rearrangements were associated with low response rates to PD-1 pathway blockade in NSCLC (mainly in lung adenocarcinoma).[54] This retrospective analysis suggests that the immune therapy of PD-1 pathway blockade may not work so well in EGFR mutated NSCLC patients and EGFR mutation targeted therapy by EGFR TKI in EGFR mutated patients might be a very important selection. However, whether it is the same in EGFR mutated LSCC patients remains unknown.

Our studies had limitations. Firstly, this pooled analysis was a retrospective nature. Secondly, the very infrequency of EGFR mutation in LSCC patients had made the discovery so difficult that there were only scattered studies and reports found from the literature search, published in lower impact journals, lacking of crucial clinical information. Even we tried attempting to collect more and better data, the reliability of combining these outcomes was questionable. All of the limitations would affect the likely results. Therefore, further prospective randomized control trials are warranted to make a validation and certification of the results.

Advanced stage (IIIB/IV) LSCC patients with EGFR mutations treated with EGFR-TKIs were identified in the database of Shanghai Chest Hospital from July 2014 to August 2016, or extracted from the publications searched from the online medicine databases.

In the hospital database and searched publications, we extracted the baseline clinical characteristics included age at diagnosis, sex, tumor histology, EGFR mutation status, performance status (PS), smoking history and prior treatment regions. Clinical treatment regimen of EGFR-TKI and response outcome was extracted or accessed. Tumor response was assessed by RECIST (version 1.1), WHO criteria and ECOG criteria in the original publications. The same terms from EGFR wild type LSCC patients were also yielded as controls. Data were recorded as individual type and grouped type, which decided the patients into different cohort for analysis.

Firstly, in the eight studies with grouped data extracted, which had its outcome of ORR, DCR and median PFS (see Table 1) in each studies, [11-17, 55] were allocated as the first-cohort.

Secondly, the searched patients with the terms extracted individually [19-42] were put as the second-cohort. The ORR and DCR were accounted. The median PFS were generated by the Kaplan–Meier method directly. These statistical analyses were performed using IBM SPSS Statistics version 22.0 for Mac OS.

Thirdly, the ORR, DCR and median PFS of the first-cohort were pooled with those in the second-cohort using Comprehensive Meta Analysis software (Version 3.13) by one-group dichotomous (for ORR and DCR) or continuous analysis functions (for median PFS) (Figure 3) . Homogeneity was tested by the Q statistic (significance level at P > 0.10) and the I2 statistic (significant heterogeneity, I2>50%). If there was no significant heterogeneity in the groups, the fixed-effects model (Mantel–Haenszel method) was used. Otherwise, the random-effects model (DerSimonian and Laird method) was used. All tests were two-sided and P≥0.05 were considered significant.

Data analysis and interpretation: all authors

Final approval of manuscript: all authors.

None of the authors has any personal or financial conflicts of interest.