Accurate gross classification through imaging is critical for determination of hepatocellular carcinoma (HCC) patient prognoses and treatment strategies. The present retrospective study evaluated the utility of contrast-enhanced computed tomography (CE-CT) combined with gadolinium-ethoxybenzyl diethylenetriamine pentaacetic acid-enhanced magnetic resonance imaging (EOB-MRI) for diagnosis and classification of HCCs prior to surgery. Ninety-four surgically resected HCC nodules were classified as simple nodular (SN), SN with extranodular growth (SN-EG), confluent multinodular (CMN), or infiltrative (IF) types. SN-EG, CMN and IF samples were grouped as non-SN. The abilities of the two imaging modalities to differentiate non-SN from SN HCCs were assessed using the EOB-MRI hepatobiliary phase and CE-CT arterial, portal, and equilibrium phases. Areas under the ROC curves for non-SN diagnoses were 0.765 (95% confidence interval [CI]: 0.666–0.846) for CE-CT, 0.877 (95% CI: 0.793–0.936) for EOB-MRI, and 0.908 (95% CI: 0.830–0.958) for CE-CT plus EOB-MRI. Sensitivities, specificities, and accuracies with respect to identification of non-SN tumors of all sizes were 71.4%, 81.6%, and 75.5% for CE-CT; 96.4%, 78.9%, and 89.3% for EOB-MRI; and 98.2%, 84.2%, and 92.5% for CE-CT plus EOB-MRI. These results show that CE-CT combined with EOB-MRI offers a more accurate imaging evaluation for HCC gross classification than either modality alone.

Hepatocellular carcinoma (HCC) is the sixth most common malignancy, and the third most common cause of cancer-associated deaths worldwide [1]. Pathologically, HCCs exhibit morphological polymorphism according to their gross classification [2], which is closely related to prognosis, including post-treatment recurrence and patient survival rates [3–6]. This relationship has been validated in patients undergoing hepatic resection and living donor liver transplantation (LDLT) [7]. Microvascular invasion (MVI) and intrahepatic metastasis incidences were lower in single nodular (SN) type HCCs than in non-single nodular (non-SN) types [3–6, 8–11]. Patients with SN HCCs report better prognoses compared to those with non-SN types [5, 6, 8–11]. However, HCC gross classification is usually performed using resected specimens. Accurate gross classification via pre-treatment imaging is vital for improved HCC management [12]. 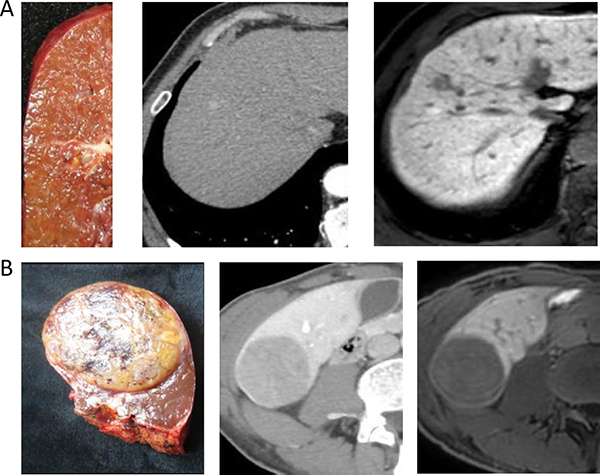 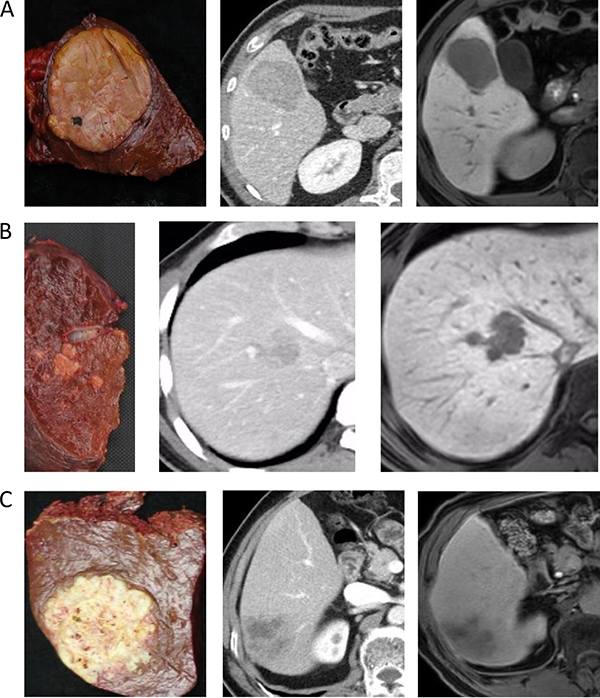 Table 2: The AUC values of each modality and in combination for non-simple nodular type

Table 3: Diagnostic ability of each modality and in combination for non-simple nodular type

In this study, we assessed the abilities of CE-CT, EOB-MRI, and CE-CT plus EOB-MRI to diagnose non-SN HCC. The AUC values for diagnosis of non-SN type HCCs by CE-CT and EOB-MRI separately were > 0.7, which corresponds to a moderate diagnostic value. However, the values for CE-CT combined with EOB-MRI were > 0.9, corresponding to a higher diagnostic value. This difference was significant compared to CE-CT alone, but not to EOB-MRI. EOB-MRI alone was a superior diagnostic method compared to CE-CT for all tumor sizes, although as tumor diameter increased, the ability of CE-CT to diagnose non-SN type tumors improved. In HCCs > 3 cm, AUC values were > 0.8 for CE-CT, EOB-MRI, and CE-CT plus EOB-MRI. These results suggest that CE-CT combined with EOB-MRI improves the accuracy of HCC gross classification. This may be because EOB-MRI offers high soft tissue contrast and superior spatial resolution, as well as hepatobiliary phase images. The EOB-MRI hepatobiliary phase may improve signal contrast between hypointense HCCs and the surrounding enhancing liver parenchyma, and thus tumor margins are clearly displayed [30].

Each imaging modality studied has limitations. For hypovascular HCCs, CE-CT cannot show tumor margins clearly. Since microvascular invasion or portal vein tumor thrombosis is present in some tumors, peritumoural liver parenchyma could reduce enhancement on hepatobiliary phase images, resulting in decreased tumor-liver contrast [32]. Furthermore, 10–20% of HCCs remain isointense or even hyperintense during the hepatocellular phase, which correlates with expression of organic anion-transporting polypeptides (OTAPs) in tumor cells [33, 34]. It is challenging to clearly display tumor margins on EOB-MRI hepatobiliary phase images, and this can lead to misdiagnosis. In the current study, seven nodules were misclassified via CE-CT plus EOB-MRI, as a result of misdiagnosis of SN type tumors as non-SN, and these misclassified nodules were treated with anatomical hepatectomy. However, most nodules misclassified in this study resulted from misdiagnosis of non-SN type tumors as SN via CE-CT, especially in HCCs ≤ 3 cm. Similar results were reported by Tomoki, et al. [12]. This problem likely occurred because smaller tumor sizes result in lower contrast and spatial resolution, and because of poor contrast-enhancement, particularly in CE-CT. In the present study, HCC gross classification via CE-CT plus EOB-MRI exhibited higher accuracy and sensitivity compared to either modality alone.

The number of patients with MVI was greater in non-SN type (33.9%) than in SN type HCCs (13.2%, P = 0.01). Non-SN classification is an MVI predictor in HCCs and contributes to poor patient prognosis post-hepatic resection or transplantation [7, 22, 28]. Anatomic hepatectomy or partial hepatic resection with a wide tumor margin is recommended to eradicate MVI [35, 36]. Misclassification of non-SN type tumors as SN might negatively impact patient survival due to differences in treatments or surgical procedures resulting from misdiagnosis.

The present study has some limitations. First, ours was a single-center retrospective study with a relatively small patient population. Further studies with a larger number of patients are needed. Second, 92 of the study patients were Child-Pugh class A, which suggests they had good liver conditions. Enrolling more patients with poor liver conditions (Child-Pugh class B or C) might decrease the ability of EOB-MRI plus CE-CT to distinguish non-SN type tumors. Third, this study lacked prognosis information for a portion of the enrolled patients. It will essential to clarify tumor recurrence and patient survival rates for HCCs diagnosed as non-SN via EOB-MRI and/or CE-CT in the future.

In conclusion, accurate gross classification through imaging is critical for determination of HCC patient prognoses and appropriate treatment strategies. HCC diagnosis via CE-CT plus EOB-MRI might provide a more accurate imaging assessment for HCC gross classification.

Study protocols were approved by our Institutional Review Board. Patient informed consent was waived due to the retrospective nature of the study. From July 2014 to May 2016, 153 consecutively registered patients with HCCs were subjected to curative hepatectomy at our institution. We based HCC diagnoses on postoperative pathology. Patients were included according to the following criteria: (1) gross specimen photographs could be reviewed; (2) no preoperative therapy was provided, such as radiofrequency or microwave ablation, transcatheter arterial chemoembolization (TACE), or molecular targeted therapy; (3) both CE-CT and EOB-MRI were preoperatively performed. Ninety-four patients meeting these criteria were enrolled in our study (Table 4). Another 59 patients were excluded for the following reasons: tumors with other cell types, such as cholangiocellular carcinoma (16 cases) or metastatic liver cancer (22 cases), and incomplete clinical data (21 cases). In patients with multiple HCCs, a major tumor was analyzed.

A section of each resected tumor specimen was collected similarly to the section used for axial CT and MRI before immediate photographing and fixation in 10% formalin. In the current study, these photographs were used to retrospectively assess HCC gross classification. In light of the General Rules of the Clinical and Pathological Study of Primary Liver Cancer in Japan [2], two experienced pathologists and two surgeons divided pathological macroscopic findings from tumor specimens in this study into five types: (1) simple nodular with indistinct margin (SN-IM), (2) simple nodular with distinct margin (SN-DM), (3) simple nodular with extranodular growth (SN-EG), (4) confluent multinodular (CMN), and (5) infiltrative (IF) (Figure 4). Macroscopic evaluations were conducted independently by one hepatologist (Hui Zhao, with 11 years of experience) and one pathologist specializing in hepatology (Jiong Shi, with eight years of experience); both evaluators were blinded to patients data. The readers independently made their classifications and in cases of disagreement a consensus was reached after discussion. 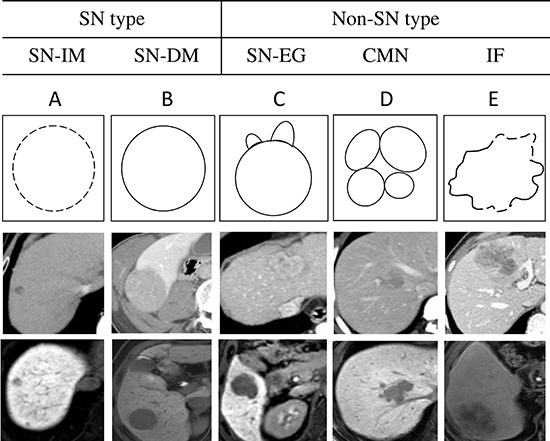 Through retrospective review of both CE-CT and EOB-MRI images, we categorized 94 nodules into five gross types, including SN-IM, SN-DM, SN-EG, (tumors were round with extranodular growth), CMN (tumors were lobulated with multiple nodular lesions), and IF (tumors were lobulated with an irregular margin). We then divided these five gross types into two groups: simple nodular (SN), including SN-IM and SN-DM, and non-simple nodular (non-SN), including SN-EG, CMN, and IF, because the latter had higher malignant potential than the former. Preoperative CE-CT and EOB-MRI images were reviewed by one hepatologist (Xu Fu, with four years of experience) and one radiologist specializing in hepatology (Min Tang, with 10 years of experience) independently; both evaluators were blinded to patient data. They independently evaluated hepatobiliary phase EOB-MRI axial images, as well as CE-CT arterial, venous and equilibrium phase axial images to predict the gross classification of nodules. The readers independently made their classifications and in cases of disagreement a consensus was reached after discussion.

Data were presented as means ± standard deviation or median (range). The Mann-Whitney U test was performed to compare continuous variables, and Fisher’s exact test compared categorical variables. The receiver operating characteristic (ROC) curve was applied to evaluate the diagnostic performance of CE-CT, EOB-MRI and both combined [38]. An area under the ROC curve (AUC) of > 0.90 corresponded to high accuracy, 0.70–0.90 indicated moderate accuracy, and 0.50–0.70 low accuracy [39]. The Chi squared test compared sensitivities, specificities, accuracies, positive predictive values (PPV), and negative predictive values (NPV). For the evaluation of interobserver variability with respect to classified imaging findings, kappa statistics was conducted. Agreement was considered to be almost perfect at a kappa value of 1.00–0.81; good at 0.80–0.61; moderate at 0.60–0.41; fair at 0.40–0.21; and poor at < 0.21 [40]. All data were analyzed using SPSS19.0 statistical software (SPSS, Chicago, IL, USA) and MedCalc11.4.2 software (Ostend, Belgium). P < 0.05 indicated statistical significance.

We thank the multidisciplinary hepatobiliary cancer team for their guidance in this study.