Angiotensin-Converting Enzyme 2 (ACE2) is a key enzyme in the renin-angiotensin system (RAS), which is implicated in the pathogenesis of hypertension and other cardiovascular diseases. In this study we investigated the expression of ACE2 in the hypothalamus and pituitary tissues and its relationship to hypertension by comparing them in male WKY and SHR rats. We observed that the plasma levels of corticotrophin releasing hormone (CRH), adrenocorticotropic hormone (ACTH) and aldosterone (ALD) were all lower in SHR than WKY rats (P<0.05), whereas plasma angiotensin II (AngII) levels were higher in SHR rats (P<0.05). Levels of ACE mRNA and protein were higher in the hypothalamus of SHR than WKY rats (P<0.05). By contrast, hypothalamic expression of ACE2 protein was lower in SHR rats (P<0.05), despite comparable mRNA levels in SHR and WKY rats. There were no differences in the expression levels of ACE, ACE2, AT1 or Mas mRNA in the pituitaries of SHR and WKY rats (P>0.05). These results suggest that insufficiency of hypothalamic ACE2 is associated with hypertension in SHR rats.

RAS is associated with hypertension in the spontaneously hypertensive rats (SHR) [7]. Cardiac ACE2 was suppressed and ACE upregulated in the SHR compared to WKY rats [8]. Moreover, it was implicated in pro-inflammatory cytokines (PICs) such as tumor necrosis factor (TNF)-a, interleukin (IL)-6, and IL-1b both centrally and in the periphery [9, 10].

The RAS system is expressed in many tissues such as pancreas, heart, liver, lungs, adipose tissue and brain and regulates blood pressure and fibrosis in these tissues [11, 12]. There is evidence that the brain RAS has a critical role in regulating blood pressure, water balance and endocrine secretion. Recent studies have demonstrated ACE2 mRNA in the rat medulla oblongata and detected ACE2 activity in the mouse brain [13, 14]. Lin and co-workers used in situ hybridization to measure ACE2 mRNA in the brainstem and demonstrated a relationship between the Angiotensin type 1a receptor (AT1a) and ACE2 expression [15]. ACE2 has also been implicated in attenuating hypertension in the brain and the hypothalamus [16, 17]. However, the role of ACE2 in the WKY hypothalamic-pituitary axis has not been investigated. Since the levels of angiotensin (1-7) were higher in the hypophyseal portal plasma compared to matched jugular plasma samples, a potential role for ACE2 within the hypothalamic-pituitary axis was postulated. Therefore, we analyzed the ACE2 mRNA and protein levels in the WKY and SHR rat HPA along with the plasma levels of CRH, ACTH, ALD and AngII to understand the link between ACE2 expression in the HPA and hypertension. 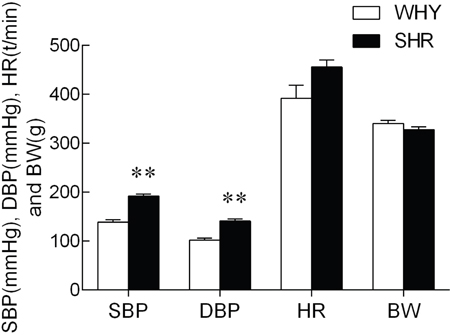 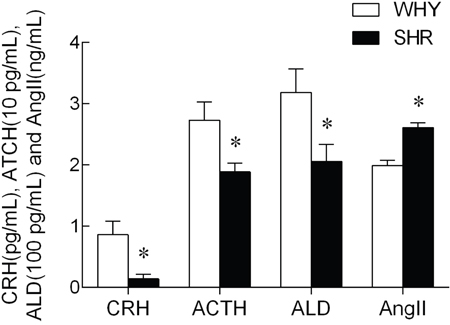 Figure 2: The content of CRH, ACTH, ALD and AngII in plasma from SHR compared with WKY. 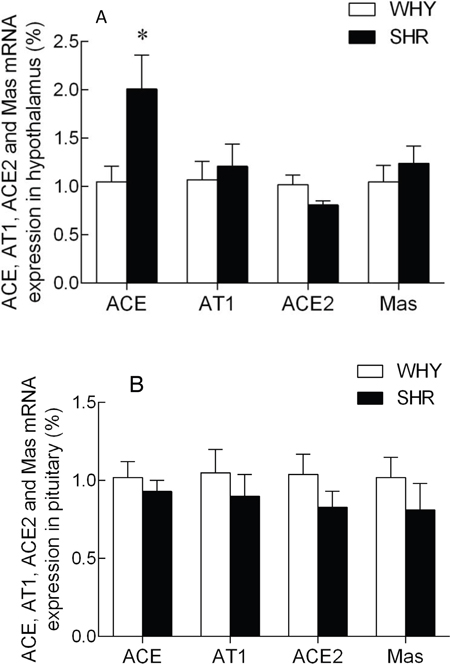 Figure 3: The expression of ACE, AT1R, ACE2 and MasR mRNA in hypothalamus and pituitary of SHR compared with WKY. 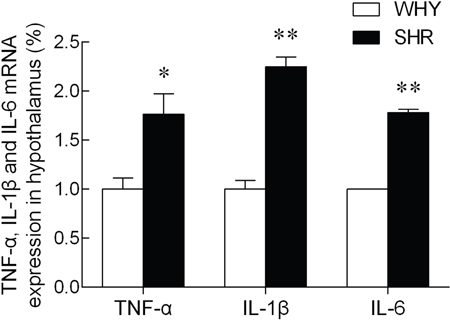 Figure 4: The expression of TNF-α, IL-1β and IL-6 mRNA in hypothalamus.

Figure 5: The protein expression of ACE2 on hypothalamus of SHR compared with WKY.

The RAS is an attractive therapeutic target for management of cardiovascular disease [18]. Renin and ACE activity are used as biomarkers for disease states such as hypertension, diabetes, heart failure and renal diseases [19, 20, 21, 22]. However, recent data indicates that ACE2 has an opposing effect to that of ACE which could have novel implications regarding the role of RAS in hypertension and cardiovascular diseases [23, 24, 25]. Our data showed that ACE2 was expressed in both hypothalamus and pituitary of male WKY and SHR rats. The expression of RAS components has been documented in many tissues, such as heart, kidneys, pancreas, lung, adipose and brain [26, 27]. Previously, the ACE2 mRNA and protein were found to be expressed in forebrain, brainstem, subcortical organ (SFO), and ventrolateral medulla (VLM) of rat [28]. Also, ACE2 was expressed predominantly in the glial cells [4]. Although ACE2 expression has been reported in DOCA-salt hypertension mice [17, 29], its expression in the hypothalamus and pituitary of SHR is unknown. Therefore, our goal was to study the expression of ACE2 in the hypothalamus-pituitary axis of rat and its relationship with hypertension.

Our study demonstrated that ACE, AT1R, ACE2, MasR mRNA were expressed in the hypothalamus and pituitary of both, the WKY and SHR rats. The upregulation of ACE mRNA and the downregulation of ACE2 mRNA and protein in hypothalamus suggested that the balance between hypothalamic ACE2 and ACE determined blood pressure. The RAS in the nervous system is critical for regulating hypertension and cardiovascular diseases. The expression of ACE2 is suppressed in RVLM of SHR compared to WKY, whereas overexpression of ACE2 decreased the high blood pressure in SHR [30]. In addition, ACE2 overexpression in the PVN demonstrated beneficial effects against the Ang II-induced hypertensive response [10]. However, similar expression of ACE, AT1R, ACE2, MasR mRNA in the pituitary of both groups of mice indicated that the pituitary RAS was not involved in the hypertension demonstrated by SHR rats.

The higher plasma levels of AngII in the SHR compared to WKY showed that the ACE-AngII-AT1R axis was hyperactive in the hypothalamus of SHR where theACE2 protein was insufficient. ACE is a key factor of RAS and generates AngII that promotes the secretion of vasopressin that causes vasoconstriction [31]. In addition, Ang (1–7), a product of ACE2, which inhibits AngII, was highly expressed in medulla oblongata and hypothalamus [32]. Elevated AngII levels induced inflammation [33], whereas overexpression of ACE2 reduced local inflammation in the hypothalamus [10]. In this context, we observed that the mRNA levels of TNF-α, IL-1β and IL-6 were enhanced in SHR compared to WKY in the hypothalamus.

ACTH increases blood pressure by inducing the release of glucocorticoids and probably aldosterone from the adrenal cortex into circulation [34]. In this study, we observed that the levels of CRH, ACTH, and ALD in the plasma were lower in SHR rats compared to WKY (P<0.05), suggesting that the activity of the HPA axis was reduced in chronic hypertension.

In summary, our data suggested that the ACE-AngII-AT1R axis was hyperactive in the hypothalamus RAS of SHR where the ACE2 protein was relatively insufficient and the pituitary was not involved in the hypertension of SHR rats.

All animal experiments were performed in accordance with relevant guidelines and regulations of the Institutional Ethical Committee of Nanjing Agricultural University Institutional Animal Care and Use. All animal experimental protocols were approved by Institutional Ethical Committee of Nanjing Agricultural University. Fourteen week old male SHR (n=8) and WKY rats(n=8) from Shanghai Experimental Animal Center (Shanghai, China) were housed in individual cages with free access to water and rat chow ( Xie-tong Medicine Biological Engineering Co., Ltd., Jiangsu, China) for one week. Then all rats were euthanized by cervical dislocation and trunk blood samples collected. Hypothalamus and pituitaries were collected and frozen at -80°C.

Plasma CRH, ACTH, ALD, and Ang II levels were determined with commercially available radioimmunoassay kits of CRH, ACTH, ALD and Ang II (Beifang BioTech Co. Ltd, Beijing, China) according to the manufacturer’s protocol. The radioactive precipitation was counted by a γ-counter. The intra- and inter-assay coefficients of variation were less than 10% and 15%.

RNA was extracted from the hypothalamus and pituitary using an RNeasy mini kit (Tiangen). The cDNA was generated by using PrimeScript RT reagent Kit (TaKaRa) with oligo-dT and random primer. The real-time PCR reaction was then performed in an ABI Prism 7700 Detection System (ABI, USA). The sequences of rat ACE, ACE2, AT1R, MasR, TNF-α, IL-1β, IL-6 and β-actin primers were listed in Table 1. Message levels were normalized to β-actin levels in each experiment.

Data were analyzed by t-test using SPSS version 17.0. Each value was expressed as mean ± standard error (SE). Statistical significance was accepted for P < 0.05.