The performance of endocervical curettage (ECC) is a dispute in population screening programs. Data of 3,460 women referred to colposcopy examination and had completed pathological results in the Shanxi Province Cervical Cancer Screening Study I and II were reviewed. Among them, 0.6% and 2.7% women were identified as the histopathological confirmed high-grade squamous intraepithelial lesion or worse (HSIL+) by ECC alone or both ECC and quadrants biopsy respectively. Age, cytology, and colposcopy impression are the impact factors for the HSIL+ yield of ECC (P<0.05). The age-adjusted odds ratio for cytology and colposcopic impression were 5.283 (95%CI: 3.989-6.997) and 3.609 (95%CI: 2.910-4.476) respectively. In low-grade squamous intraepithelial lesion cytology and abnormal colposcopy, no additional HSIL+ was found by ECC. In low-grade squamous intraepithelial lesion cytology but normal colposcopy, the additional yield was 0.6%, 0.8% and 1.1% for the three age groups respectively. In high-grade squamous intraepithelial lesion or worse cytology, the additional HSIL+ yield by ECC ranged between 1.4% and 6.6%. We conclude that the performance of ECC increases with age, the severity of cytology, and colposcopic impression. For women 35 years and older, ECC should be performed if the cytological finding is high-grade or worse in cervical cancer screening program.

In the recently published cancer statistic in China, the estimated number of new cervical cancer cases among Chinese women is about 8 times of the cases in the U.S [1, 2]. To improve the government implemented cervical cancer screening program, in which 10 million 35-64 years-old women living in rural areas would be screened every year by county level hospitals, more efficient screening procedure, more experienced gynecologists and pathologists are in need. In current guideline of cervical cancer screening, women with abnormal results should be referred to colposcopy, such as human papillomavirus (HPV) positive with atypical squamous cells of undetermined significance (ASC-US) cytology, or low-grade squamous intraepithelial lesions or worse (LSIL+) cytology alone. Histopathology specimens including biopsy and endocervical curettage (ECC) might be taken under colposcopy. The histology diagnosis is the gold standard to define high-grade squamous intraepithelial lesions or carcinomas (HSIL+) cases [3]. However, due to the lack of enough experienced clinicians and qualified histopathologists, the sampling and diagnose for biopsy and ECC remain obstacles to improving the quality of the program. It has been reported that random biopsy could increase the HSIL+ yield in women with high-grade cytology [4, 5]. The current guideline [6] prefer endocervical sampling for non-pregnant women with LSIL cytology if the colposcopic examination is inadequate or no lesion is identified; and it is acceptable if the colposcopy is adequate and a lesion is present. To perform ECC or not and the efficacy of ECC remains a question in real world population screening. Firstly, ECC is difficult to perform in patients with a stenotic cervix or in menopausal women. Secondly, the inter-observer agreement in the interpretation of ECC specimens is poor. For specific diagnoses, cases interpreted as normal or high-grade dysplasia demonstrated greater agreement than those interpreted as low-grade dysplasia. Individual pathologists’ comparison κ values ranged from 0.31 to 0.80, as well as false-positive and false negative results as high as 30% and 50%, respectively [7]. Additionally, ECC is an uncomfortable procedure and has been rated by patients as a 5.8 on a visual analog scale of 0 to 10 in prior studies [8].

Less debate regarding the performance of ECC in unsatisfactory colposcopy would increase the yield of HSIL+ [7]. However, controversy remains of the usefulness of ECC in evaluating women who have abnormal cervical cytology under satisfactory colposcopy. Data are needed to further define the role of ECC in evaluating women who have cervical disease. In our study, data from the Shanxi Province Cervical Cancer Screening Study (SPOCCS) I and II during June 1999 to July 2002 were reviewed to estimate the utility of ECC.

11,031 women were screened in the SPOCCS I and II during June 1999 to July 2002. The eligible women were not pregnant currently and had no history of cervical cancer, pelvic radiation, or hysterectomy. For SPOCCS I and II, all women underwent physician-sampling HPV DNA test (Hybrid Capture 2, Digene, Corp), liquid-based cytology (LBC) and visual inspection with 5% acetic acid staining (VIA). For SPOCCS I, all women have had four-quadrant biopsies and ECC under colposcopy regardless of the primary screening results, while women with positive VIA, high-risk HPV or a positive LBC test (ASC-US or worse) were referred to four-quadrant biopsies and ECC in SPOCCS II. A demographic questionnaire was collected by face-to-face interview before clinic examination at baseline. The Institutional Review Boards for human research subjects of both Cleveland Clinic Foundation and CHCAMS approved the two studies. The inclusion flowchart is shown in Figure 1.

The histopathology diagnose for quadrants biopsy were based on the most severe diagnosis among the four quadrants. The last column and last row were the constituent ratio of pathology classification in all women by ECC and biopsy respectively. 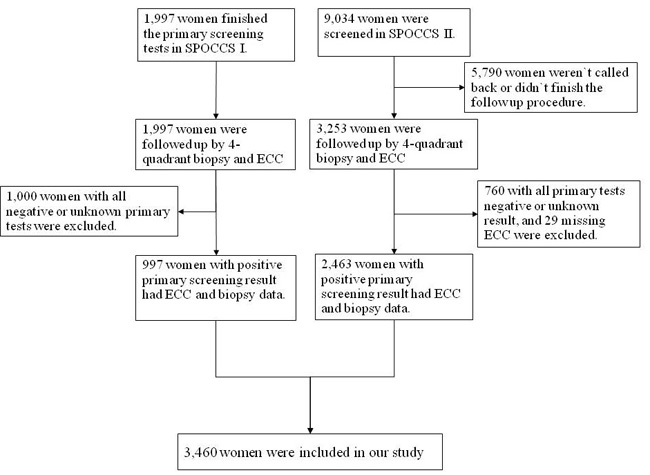 Specimens for LBC were obtained with a plastic spatula and an endocervical brush and they were placed in transport medium. LBC was prepared via the ThinPrep method (Cytyc Corp., Boxborough, MA) and was interpreted using the Bethesda classiﬁcation system: negative for intraepithelial lesion or malignancy (NILM), ASC-US, atypical glandular cells (AGC), LSIL, , high-grade squamous intraepithelial lesions (HSIL), atypical squamous cells cannot exclude HSIL (ASC-H), and squamous cell carcinoma (SCC). Cytologists from the Cancer Hospital, Chinese Academy of Medical Sciences (CHCAMS) were blinded to other screening tests. Cytologists at the Cleveland Clinic reviewed all abnormal slides and 5% of the normal slides. No signiﬁcant differences in diagnoses were seen between the Beijing and the Cleveland Clinics.

Colposcopy was considered satisfactory if the entire squamocolumnar junction could be observed. The cervix was divided visually into four quadrants by lines drawn from 12 to 6 o’clock and from 3 to 9 o’clock positions. Each quadrant of the cervix was graded separately as normal (no visible lesions), low-grade squamous intraepithelial lesion (LSIL) suggestive of HPV or cervical intraepithelial neoplasia 1 (CIN1), high-grade squamous intraepithelial lesion (HSIL) suggestive of intraepithelial neoplasia 2 or 3 (CIN2 or 3), or invasive cervical cancer. All abnormal colposcopic impression by colposcopy was biopsied. If colposcopic examination showed no lesions in any quadrant, a random biopsy was obtained at the squamocolumnar junction in four quadrants at the 2, 4, 8, or 10 o’clock positions, respectively. It was acceptable to take more than one biopsy per quadrant depending on the colposcopic impression. ECC was performed with a Kevorkian curette.

The file copies of all medical records, including sample collection, biological test results, personal questionnaires, were kept in a personal file for every woman. Double entry validation and logical consistency check were performed. SPSS 23.0 were used for data analysis. Mean and the standard deviation was calculated for continuous variables, such as the age at screening, at menarche, and at sex debut. A proportion was calculated for a categorical variable, such as marriage status and tobacco use. Women were stratified by age ( < 34, 35-39, 40-44, 45-49, ≥50), cytology (NILM, ASC-US/AGC, LSIL, HSIL/ASC-H/SCC), HPV status (positive, negative), VIA (normal, abnormal, cancer) and colposcopic impression (normal, LSIL, HSIL, cancer). The Cochran-Armitage trend test was used to detect the trend of HSIL+ yield by ECC along with the increasing of age group, severity of cytology, VIA, and colposcopy impression. Binary logistic regression was used to detect the risk factors and the odd ratios (OR) with 95% confidence intervals (95%CI). Age, cytology, HPV status, VIA and colposcopy impression were included as candidate factors. The pathology finding of ECC was the dependent variable. P < 0.05 was considered statistically significant.

Efficacy of biopsy and ECC in detecting HSIL+ 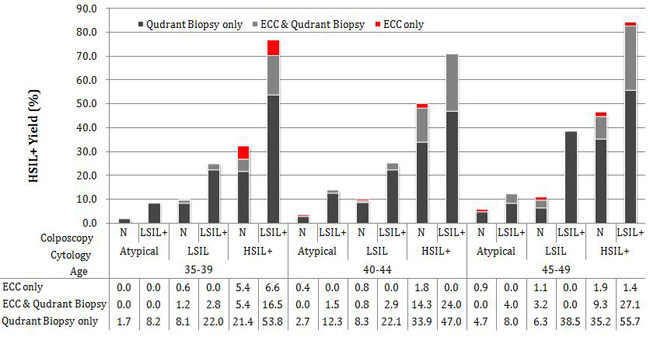 The appropriate clinical setting in which ECC should be used is a subject of debate. Some advocate that ECC is unnecessary, due to its poor performance compared with concurrent cervical biopsy specimens. Others use ECC in selected patient populations as an adjunct procedure [7, 8]. In our institution, it has been a routine procedure to perform ECC in all non-pregnant women with low-grade cytological abnormalities, regardless of the adequacy of the colposcopy or the presence of an ectocervical lesion. According to the presented study, the performance of ECC to find HSIL+ cases under some conditions is not satisfactory. Of all the women who have had ECC, only 0.60% of them are benefited from it directly, 136 or 137 ECCs needed to be performed to identify one additional HSIL+ case that may be missed by quadrants biopsy, implying not all women equally benefited and most of them suffered the pain unnecessarily. In our data, it is less necessary to perform ECC among women with atypical or LSIL cytology and positive colposcopy findings.

Age, cytology and colposcopic impression were the association factors to whether ECC could found HSIL+ or not, according to the logistic regression analysis. The HSIL+ yields of ECC increase with age, the severity of cytological abnormality, and the colposcopy findings. Age is a reasonable indication for ECC decision due to the physiological changes of the cervix along with the aging process. In the presented data, no HSIL+ case was found by ECC in women younger than 35 years, which should be attributed to the limited number of younger women included in our study and the lower HISL+ prevalence in this population [9]. The data shows that HSIL+ yield of ECC in ASC-US or AGC or LSIL cytology is low, irrespective of the age group, which is similar to others studies [10-15]. Particularly under the condition that the colposcopic findings are positive, no additional HSIL+ cases were found by ECC alone in our dataset. It implied that in future large population screening programs, women with ASC-US or AGC or LSIL cytology but positive colposcopic impression might be avoided from the unnecessary pain from ECC. However, if the colposcopic impression is negative among women with LSIL cytology, the additional yield is 0.6%, 0.8% and 1.1% for the three age groups. The additional yield may not be satisfactory, but it may be acceptable in older women who had LSIL cytology but negative colposcopic finding. In women older than 35 years with cytological HSIL+, the additional HSIL+ yield by ECC alone should not be ignored, which ranged from 1.4%-6.6% in most cases. This finding suggested that among women with HSIL cytology, ECC is recommended irrespective of the age and colposcopic impressions. A higher detection rate of HSIL+ cases by ECC (4.5%) and similar detection rate among HSIL+ cytology (29.9%) and HSIL+ colposcopy impression (21.2%) women were reported by another retrospective study conducted by Pretorius RG et al [16]. Among the women had ECC, 1.5% (274/18,537) were found HSIL+ lesions by ECC alone. If limiting the number to women older than 35 years only, the yield of ECC alone is 2.4% (189/7,959), which are much higher than that of our data. It could be explained by the different population and referral criterion. Women included in their study were younger with a median age of 32 years old and were patients from clinics. The women referred for colposcopy were ASC-US with positive hrHPV tests or for 2 cytology of ASC-US with negative hrHPV tests 1 year apart, LSIL cervical cytology or 2 negative cytology results with positive hrHPV 1 year apart. While our analysis was based on a referral population from cervical cancer and precancerous screening projects, and any primary result positive women was called back for colposcopy, including abnormal VIA, hr-HPV test positive or LSIL cytology alone, which implied a lower risk of high-grade cervical lesion and cancer in our population.

We concluded that the performance of ECC increases with age, the severity of cytology, and colposcopic impression. For women 35 years and older, ECC should be performed if the cytological finding is HSIL+, especially under normal colposcopy impression in cervical cancer screening program.

Qiao Y and Zhang X conceived and designed the study; Song Y and Zhao Y analysis the data and wrote the manuscript. All authors read and commented on the draft version of the manuscript and approved the final version.

All authors declared no financial and personal relationships with other people or organizations that can inappropriately influence our work.