MicroRNAs play an important role in liver cancer genesis and progression. In this study, we identified down-regulation of miR-146b-5p associated with tumor growth, metastasis and poor survival in hepatocellular carcinoma (HCC) patients. miR-146b-5p could suppress proliferation, migration, and invasion and induced apoptosis in vitro and in vivo. Remarkably, TNF receptor associated factor 6 (TRAF6) was confirmed as a direct target of miR-146b-5p in HCC and miR-146b-5p exerted the tumor suppression roles through inhibiting the phosphorylation of Akt mediated by TRAF6. Furthermore, we identified long non-coding RNA MALAT1 as a molecular sponge of miR-146b-5p to down-regulate its expression in HCC. In general, our results indicate that miR-146b-5p inhibits tumor growth and metastasis of HCC by targeting TRAF6 mediated Akt phosphorylation.

Hepatocellular carcinoma (HCC) is one of the most common digestive cancers in China [1]. MicroRNAs represent as a class of endogenous short single-chain RNAs that regulate various cellular processes through binding to the 3’ untranslated region (3’-UTR) of target mRNAs [2]. Plenty of reports have well established their roles in metabolism [3], growth [4], senescence [5], angiogenesis [6] and metastasis [7].

In this study, we disclosed that miR-146b-5p was down-regulated in HCC tissues and correlated with poor prognosis. In vitro and in vivo experiments showed that miR-146b-5p could suppress proliferation, migration, and invasion and induce apoptosis through inhibiting TRAF6/p-Akt signaling pathway. 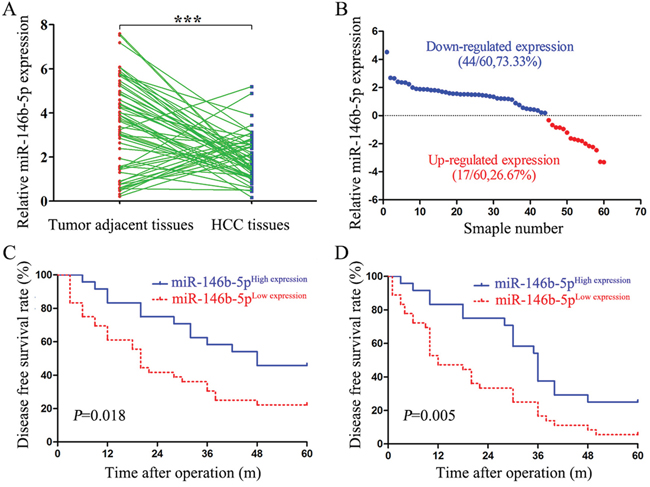 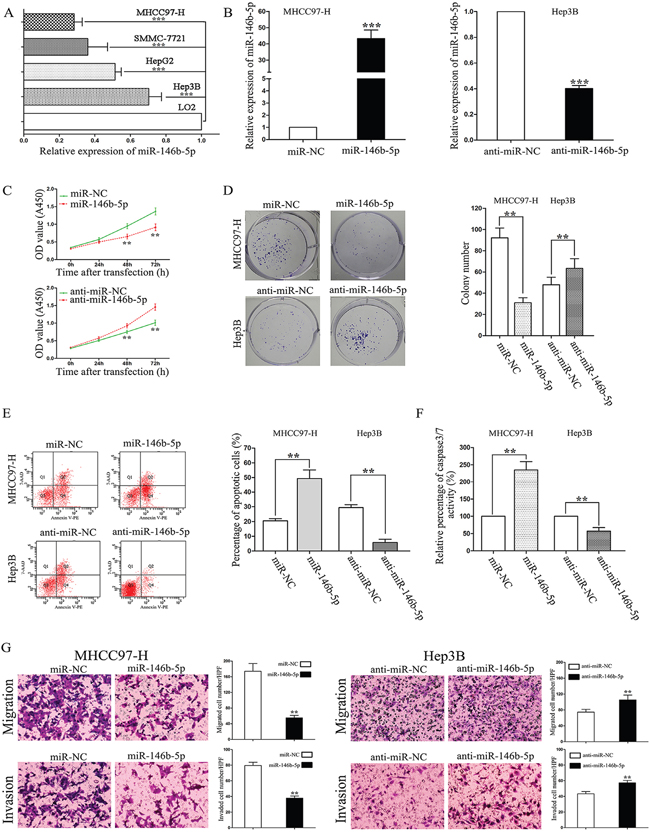 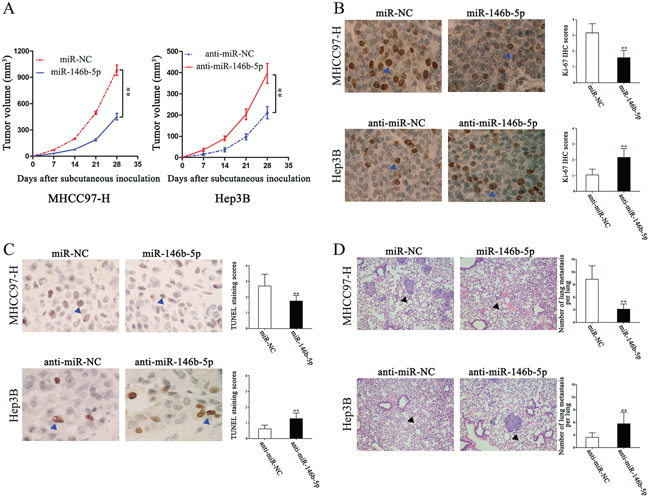 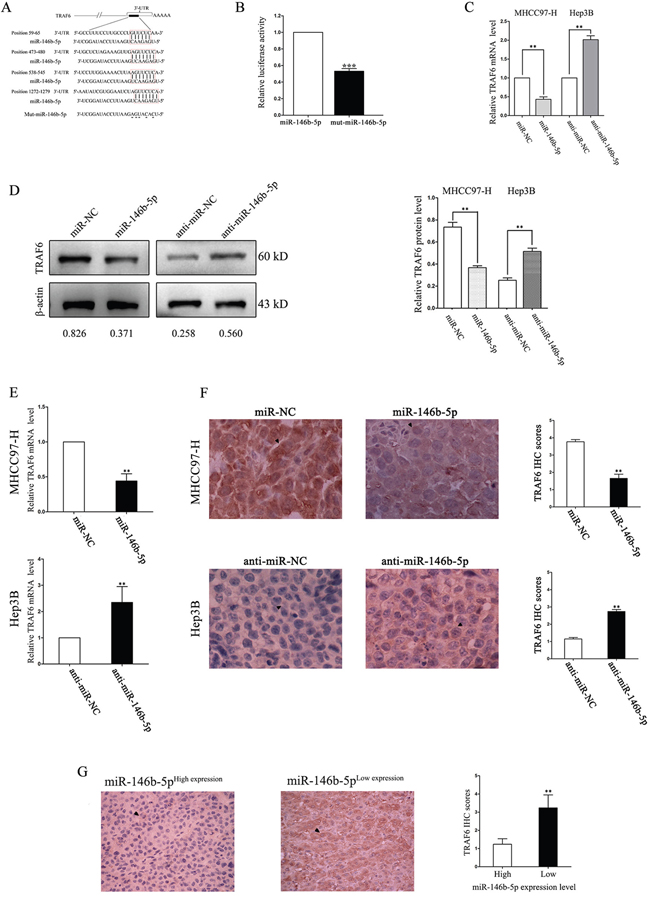 TRAF6 is thought to achieve its functions partly through contributing the phosphorylation of Akt [17]. In order to explore whether miR-146b-5p performs its anti-cancer role though inhibiting the TRAF6-mediated phosphorylation of Akt, we detected the expression of total Akt (t-Akt) and phosphorylated Akt (p-Akt) in transfected cells. As shown in Figure 5, miR-146b-5p over-expression decreased the expression of p-Akt in MHCC97-H cells, whereas miR-146b-5p knockdown increased the expression of p-Akt in Hep3B cells (P<0.05, respectively, 1st row). However, no significant expression changes of total Akt (t-Akt) were detected in these two cell lines (P>0.05, respectively, 2nd row). Subsequently, we detected a series of downstream genes of the TRAF6/p-Akt signaling pathway, such as Bcl-2, Mcl-1 and MMP-9. Western blot results showed that the proteinlevels of these three molecules were down-regulated in MHCC97-H cells and up-regulated in Hep3B cells (P<0.05, respectively, 3rd to 5th rows). 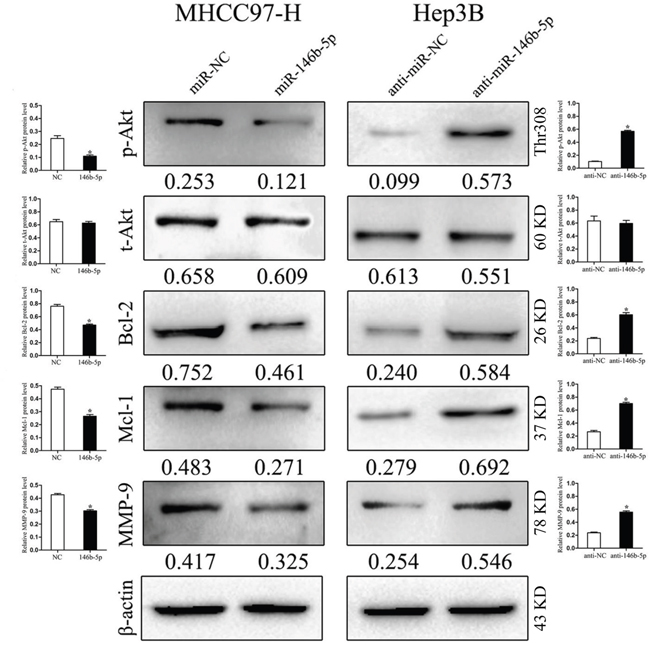 Figure 5: miR-146b-5p exerts its functions through inhibiting the TRAF6/p-Akt signaling pathway. In MHCC97-H cells with miR-146b-5p over-expression, the phosphorylation of Akt (p-Akt) was impaired and the expression levels of Bcl-2, Mcl-1 and MMP-9 were decreased. In Hep3B cells with miR-146b-5p knockdown, enhanced the phosphorylated Akt induced the expression of Bcl-2, Mcl-1 and MMP-9. Neither over-expression nor knockdown of miR-146b-5p could find any significant changes of total Akt (t-Akt) expression. *P<0.05. Immunoblotting was performed at least in triplicate and the data are presented as the (mean ± SD).

TRAF6 alters the effects of miR-146b-5p on HCC cells

In contrast, we transfected TRAF6 vectors into miR-146b-5p overexpressed MHCC97-H (MHCC97-HmiR-146b-5p) and TRAF6 siRNAs into miR-146b-5p knockdown Hep3B cells(Hep3Banti-miR-146b-5p). As shown in Figure 6A, 6B and 6C, TRAF6 over-expression in MHCC97-HmiR-146b-5p cells promoted cell viability, migration, invasion and suppressed apoptosis; however, TRAF6 knockdown in Hep3Banti-miR-146b-5p cells inhibited cell viability, migration, invasion and induced apoptosis (P<0.05 and P<0.01, respectively). Furthermore, TRAF6 abrogated the effects of miR-146b-5p for Akt phosphorylation as well as protein expression of Bcl-2, Mcl-1 and MMP-9 (P<0.01, respectively, Figure 6D). However, there were no significant changes for total Akt in these two cell types (P>0.05, respectively, Figure 6D). 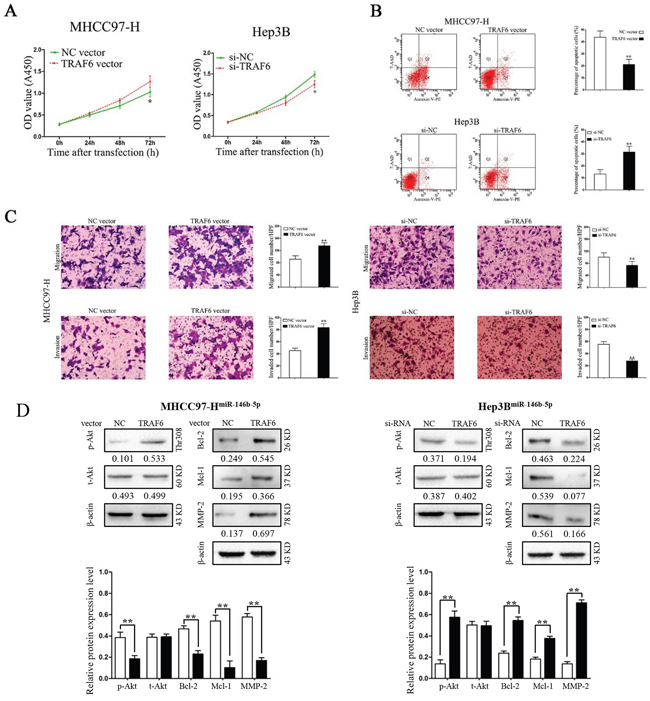 Figure 6: Modification of TRAF6 expression partly abrogated the functions of miR-146b-5p on HCC cells. A-C. Modification of TRAF6 expression partly abolished the effects of miR-146b-5p on cell viability (A), apoptosis (B), migration and invasion (C) of MHHC97-H and Hep3B cells. *P<0.05, **P<0.01. D. TRAF6 abrogated the effects of miR-146b-5p for Akt phosphorylation as well as the protein levels of Bcl-2, Mcl-1 and MMP-9. **P<0.01. All experiments were performed at least in triplicate and the data in A-D are presented as the (mean ± SD).

Studies have shown that long noncoding RNAs (lncRNAs) act as an endogenous sponge of microRNAs. We used Starbase v.2.0 to predict that a long non-coding RNA, metastasis-associated lung adenocarcinoma transcript 1 (MALAT1), had a complementary sequence of miR-146b-5p. We found that the expression of MALAT1 was higher in HCC tissues than that in tumor-adjacent tissues (P<0.01, Figure 7A). Furthermore, a negative relationship was identified between these two non-coding RNAs, the correlation index was -0.483 (P=0.007, Figure 7B). MHCC97-H and SMMC-7721 cells which had high original MALAT1 expression levels (P<0.01, respectively, Figure 7C) were selected to silence MALAT1 expression by siRNA (P<0.001, respectively, Figure 7D). Real-time PCR results showed that MALAT1 knockdown rescued miR-146b-5p expression in MHCC97-H and SMMC-7721 cells (P<0.001, respectively, Figure 7E). These findings might explain why miR-146b-5p expression was lower in HCC. 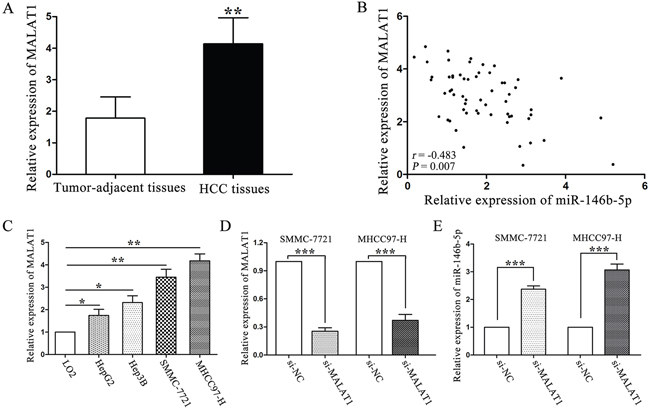 To confirm this hypothesis, a series of in vitro and in vivo assays were designed to investigate the biological functions of miR-146b-5p. We revealed that up-regulation of miR-146b-5p reduced proliferation, migration and invasion, promoted apoptosis and caspase 3/7 activity in vitro, and arrested tumor growth and lung metastasis in vivo. Even though miR-146b-5p promoted the proliferation and invasion of osteosarcoma cells [23], our results were still consistent with the previous reports in prostate and pancreatic cancers [24].

Functionally, TRAF6 exhibits an E3 ubiquitin ligase activity. Unlike other E3 ubiquitin ligases catalyze the synthesis of polyubiquitin chains linked through lysine-48 (K48), the chains catalyzed by TRAF6 was linked through the point of lysine-63 (K63) [25]. These unique chains can lead to the activation of TAK1 [26], MAPK [27] and many other kinases’ activity. We used dual-luciferase reporter system to confirm that only wild-type miR-146b-5p changed the luciferase activity of 3’-UTR of TRAF6 mRNA. miR-146b-5p could decrease the TRAF6 expression in vitro and in vivo. Finally, we provided a negative correlation between TRAF6 and miR-146b-5p expression in a cohort of HCC patients. Our results also showed that miR-146b-5p only imapired the phosphorylation of Akt through inhibiting the expression of TRAF6 but not influenced the total Akt expression. Because the K48 linked ubiquitination usually caused degradation of target proteins, we could partly confirm that K63 might be the catalytic site of TRAF6 for Akt ubiquitination. We also detected three downstream genes of Akt signaling pathway which could enhance cell growth and metastasis. First, the expression levels of Bcl-2 and Mcl-1 were down-regulated through inhibiting TRAF6/p-Akt activation by miR-146b-5p. Mcl-1 served as a substrate of caspase-3 [28], its down-regulation could be explained by the enhancement of caspase 3/7 activity after the miR-146b-5p over-expression. Next, our study also found that miR-146b-5p inhibited the expression of MMP-9, and that might explain why miR-146b-5p could inhibit cell invasion and lung metastasis. Furthermore, we rescued the expression of TRAF6 in MHCC97-HmiR-146b-5p cells and silenced TRAF6 expression in Hep3Banti-miR-146b-5p cells. Our results showed that TRAF6 partly abrogated the effects of miR-146b-5p on HCC cell viability, proliferation, apoptosis, migration, invasion through reactivated Akt signaling pathway.

In conclusion, this study demonstrated that down-regulation of miR-146b-5p in HCC tissues was related to malignant clinical features and poor prognosis. Using in vitro and in vivo studies, miR-146b-5p was demonstrated as a novel inhibitor for tumor growth and metastasis in HCC. The multiple anti-cancer functions of miR-146b-5p were due to the inhibition of the TRAF6/p-Akt pathway (Figure 8). Together, our findings suggested that miR-146b-5p could become a novel prognostic bio-marker and potential therapeutic target in HCC. 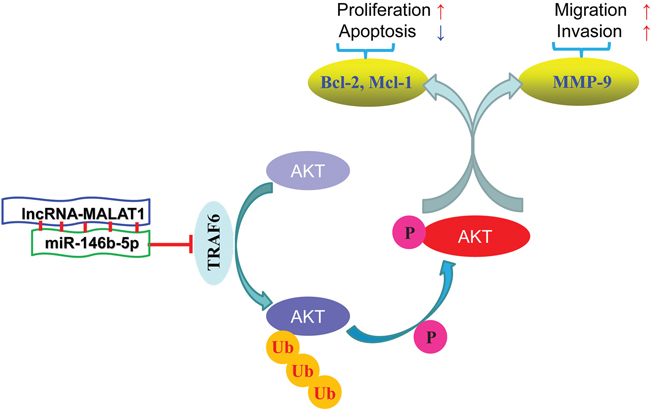 A total of 60 resected HCC tissues and matched tumor-adjacent tissues were provided by the Department of Hepatobiliary Surgery, First Affiliated Hospital of Xi’an Jiaotong University (Xi’an, China) between January 2009 and May 2010. All patients received follow-up after surgery until May 2015. The median follow-up time was 31 months. The demographic, clinical and pathological characteristics were obtained from the medical records and shown in Table 1. Informed consent was obtained in accordance with a protocol approved by the Ethics Committee of Xi'an Jiaotong University.

The 8 μm pore-sized transwell inserts (Nalge Nunc, Penfield, NY, USA) were used to detect cell migration, or coated with matrigel (BD Biosciences, Franklin Lakes, NJ, USA) at 1 mg/mL on the inner layer to detect cell invasion. Cells were re-suspended with reduced serum DMEM medium (Gibco, Carlsbad, CA, USA) and added into upper-chamber, and a 750 μL completed DMEM medium was added into the lower-chamber, then incubating for 24 hours. Cells were fixed in 4% paraformaldehyde for 2 min and stained with 0.3% crystal violet. Migrated or invaded cells on the under-surface were counted under a light microscope.

4 weeks BALB/c nude mice were purchased from the center of laboratory animals of Xi’an Jiaotong University. 5×106 cells were suspended in 100 μL PBS and injected into the subcutis. Width and length of the neoplasm were measured with calipers every week. Tumor volume was calculated with the formula: π×length×width2/6. 4 weeks later, mice were excused. 100 mg tissue was collected from every sample to isolate total RNA. Neoplasms were fixed with 4% paraformaldehyde, embedded in paraffin and made into 4 μm slices. Ki-67 antibodies (#9027, CST, Danvers, MA, USA) were used to determine cell proliferation by immunohistochemical (IHC) staining as we described previously [33]. In situ cell death detection kit, POD (Roche, Mannheim, Germany) was used to detected cell apoptosis according to the manufacturer's instruction. The scores of TUNEL positive staining cells were expressed as the following grades: 0, <5%; 1, 6%–25%; 2, 26%–50%; 3, 51%–75%; and 4, >75%.

1×105 cells with 100 μL PBS were injected into mouse systemic circulation through the tail vein. Lungs were obtained after four weeks feeding and fixed with 4% paraformaldehyde. 4 μm consecutive sections were made and stained with hematoxylin and eosin. The number of metastatic clusters was calculated to analyze the effects of different treatments.

The 3'-UTR region of TRAF6 was inserted into pmiR-RB-Report™ vector (RiboBio, Guangzhou, China). miR-146b-5p and recombinant vectors were co-transfected into MHCC97-H cells with Lipofectamine® 2000. Ranilla luciferase activity was detected using the dual-luciferase reporter assay system (Promega, Madison, WI, USA) to reflect the binding between miR-146b-5p and the 3'-UTR region of TRAF6. Firefly luciferase activity was served as the internal control.

This work was supported by a grant from the National Natural Scientific Foundation of China (NO.81472247).

23. Al-Khalaf HH, Aboussekhra A. MicroRNA-141 and microRNA-146b-5p inhibit the prometastatic mesenchymal characteristics through the RNA-binding protein AUF1 targeting the transcription factor ZEB1 and the protein kinase AKT. The Journal of biological chemistry. 2014; 289:31433-47.