Circulating miR-31 as an effective biomarker for detection and prognosis of human cancer: a meta-analysis

Method: The studies were accessed using multiple databases. RevMan5.3, Meta-DiSc 1.4, and STATA14.0 were used to estimate the pooled effects, heterogeneity among studies, and publication bias.

Conclusion: Circulating miR-31 is an effective biomarker and could be used as a component of miRs signature for cancer detection and prognosis surveillance.

MicroRNAs (miRNAs, miRs) are short, single stranded RNA molecules, which primarily bind messenger RNAs (mRNAs) at 3’UTRs via partial complementarity with the “seed sequence”[1]. MiRNAs serve as negative regulators of gene expression at the post-transcriptional level and have been widely implicated in pathogenesis of human diseases, especially cancer [2, 3]. Genome-wide profiling has identified that miRNAs are frequently aberrantly expressed in human cancers. Experiments showed that miRNAs involved in tumorigenesis, angiogenesis, metastasis, and chemo-resistance by directly targeting specific oncogenes or tumor suppressors. As participated in many cellular cancer pathways including development, cell proliferation, differentiation, and apoptosis [4–6], miRNAs were expected to be crucial factors for cancer diagnosis and therapy as well as prognosis surveillance.

MiR-31, a highly evolutionarily conserved miRNA, plays an important regulating role in embryonic implantation, development, bone and muscle homeostasis, and immune function [7]. Abundant studies have reported that miR-31 was dysregulated in various human cancers, such as lung cancer [8], colorectal cancer [9], oral squamous cell carcinoma [10], cervical cancer [11], ovarian cancer [12], and upper tract urothelial carcinoma [13]. Abnormal expression of miR-31 in tumorous tissue has confirmed it involved in tumorigenesis and progression of cancers [14–16]. Similar to being tested in cancer tissues, miR-31 could be steadily detected in circulating blood. The miR-31 level of circulating blood was positively correlated with that in cancer tissues [17]. Consequently, circulating miR-31 was used as a noninvasive biomarker for cancer detection and diagnosis [17–22]. Furthermore, circulating miR-31 was found associated with prognosis such as metastasis and survival [18, 19, 22]. However, the effect of circulating miR-31 on cancer diagnosis and prognosis is controversial, and no meta-analysis has investigated the association between circulating miR-31 expression and diagnosis as well as prognosis of cancer. The present meta-analysis aimed to explore the role of circulating miR-31 on cancer detection/diagnosis and further on prognosis surveillance of patients.

Fourteen eligible studies included in the meta-analysis (Figure 1), 11 from China [17, 19, 20, 22–29] and 3 from United States [18], Denmark [30], and Spain [21]. The studies involved 1397 cancer patients and 1039 controls, with mean sample size of 99.8 patients (range 20 to 300). Seven types of cancer were evaluated: lung cancer (n = 4), colorectal cancer (n = 4), esophageal squamous cell carcinoma (n = 2), breast cancer, renal tumors, Pancreatic Cancer, Oral squamous cell carcinoma (n = 1, each). The level of miR-31 was detected in circulating blood by RT-PCR. In the prognosis analysis, the group cut-off value determined by the original research depended on the median/mean value of miR-31 level or ROC (receiver operating characteristic curve) analysis. The main characteristics of each study are summarized in Table 1. 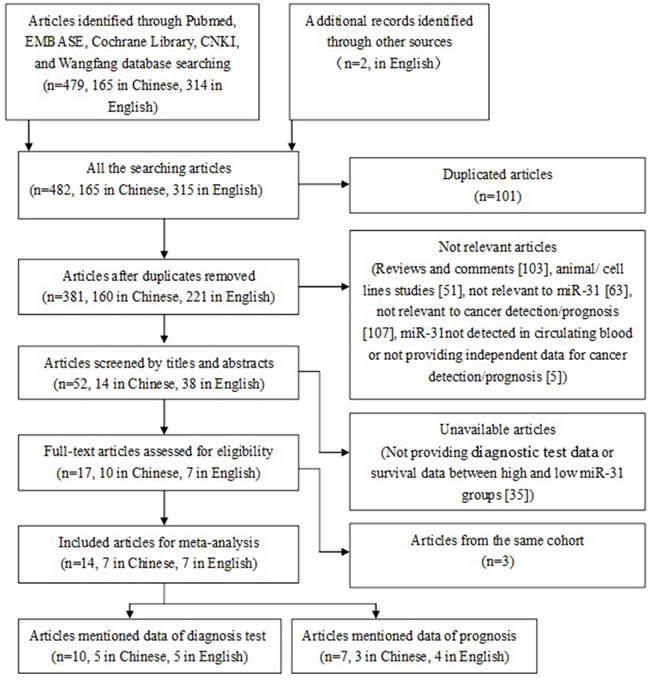 Figure 1: The flow chart of meta-analysis.

Table 1: Basic data for all included studies in the meta-analysis 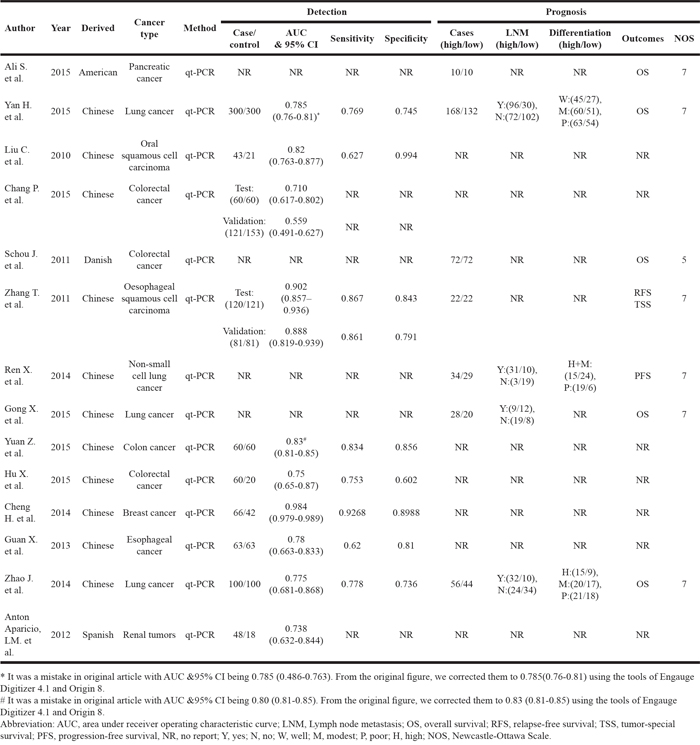 In the 14 eligible studies, 10 studies presented the AUC (area under receiver operating characteristic curve) of circulating miR-31 on cancers detection/diagnosis with 1122 cases and 1039 controls, although only 8 studies had the values of sensitivity and specificity for the diagnosis tests. In addition, the participants in 2 studies were divided into two groups for testing and validation. Consequently, we assessed the overview quality of 12 diagnosis tests and reported them in Supplementary Figure 1. The risk of bias in patient selection was considered high in 11 (92%) tests, mainly due to the 2-gate (case-control) design in the majority of tests. Because the diagnosis of all patients was known before the index test performed, the risk of bias of index test performance was considered high in 11 (92%) studies. However, the risk of bias for reference standard definition was low in the majority of studies (n = 10; 83%); and the risk of bias arising from patient flow and timing of procedures was also low in the majority of studies (n = 8, 67%). For the regarding applicability, there was low risk identified for patient selection (n = 8, 67%), reference standard (n = 10, 83%), and reference standard (n = 10, 83%).

Figure 2: pooled AUC of circulating miR-31 test for the diagnosis of various cancers. 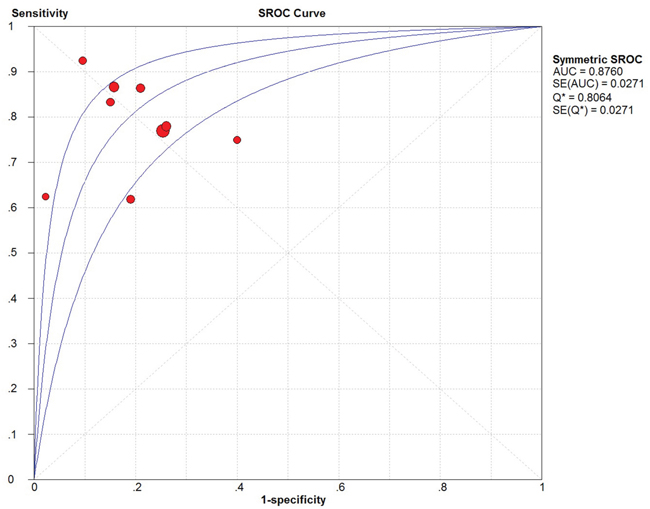 Figure 3: The SROC curve of circulating miR-31 test for the diagnosis of various cancers. 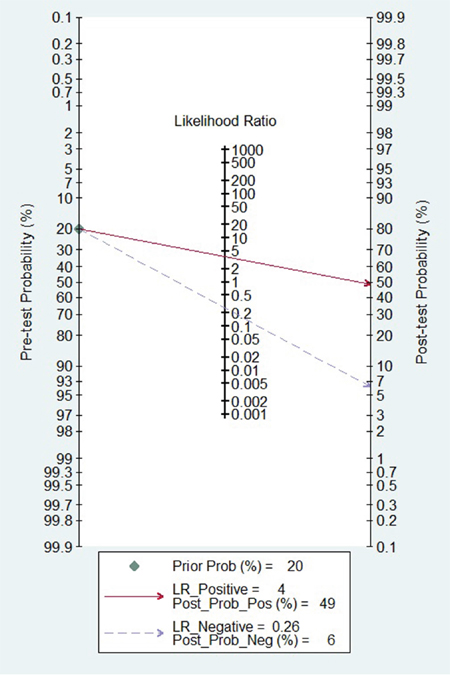 Table 2: The pooled effects of different types of cancer in subgroup

a There were only two tests which reported the sensitivity and specificity.

Meta-analysis of circulating miR-31 for prognosis of human cancer

Association between circulating miR-31 and OS

Sensitivity analysis was conducted for the association between circulating miR-31 and cancer detection as well as cancer prognosis. For the cancer detection, each diagnosis test was deleted in turn to examine the influence of the removed data on the overall AUC. The value of pooled AUC remained above 0.50 throughout (data not shown). In addition, each of the 9 tests was also excluded sequentially; the summary sensitivity and specificity, PLR, NLR, and area under sROC were altered (data not shown). For the cancer prognosis, each of the 5 studies was sequentially excluded; high miR-31 expression still significantly increased the risk of OS throughout (data not shown). All of them indicated that the present pooled estimated were stable. 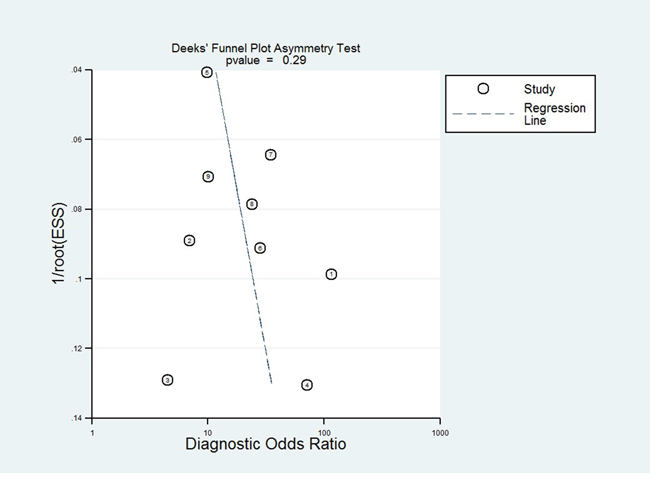 MiR-31, a common oncomiR, has been reported to increase the risk of different types of cancer. Research in the mechanism of miR-31 found that it could target genes such as ARID1A [33], SATB2 [34], ARID1A [35], HuR [36], BAP1 [37], EZH2 [38], and RASA1 [39], and it could further activate oncogenes and promote tumor cell proliferation, migration and invasive capability in vitro. Furthermore, miR-31 could contribute to the epithelial-to-mesenchymal transition (EMT)[40, 41] and involved in response to chemo-radiotherapy [42–44]. However, it could also deregulate the expression of tumor activator [45, 46]. As miR-31 affects multiple targets simultaneously [7], the role of miR-31 depends on the total level and differential distribution. Circulating miR-31, always positively correlated with the level of tumor tissue [8, 47, 48], effectively represented the total level and was predicted as a good biomarker for cancer diagnosis and prognosis surveillance [7].

In the present meta-analysis, we strictly followed the PRISMA guidelines to conducted the meta-analysis, and evaluate the quality of included studies using the scales recommended by Cochrane Collaboration. There were still several limitations. First, there were only seven types of cancer included, and the studies of each type cancer as well as the samples of patients in them were few; so our results needed more large cohorts to validate. Second, because most studies were from China, the results may represent Chinese cancer patients only. Third, in spite of the fact that the present study yielded a relatively high diagnostic value, the effect of circulating miR-31 was not high enough according to the criteria of high accuracy (PLR > 10, NLR < 0.1). Consequently, we recommend combining significant miRNAs from meta-analyses as a miRNAs signature to detect cancers, which could generate a more accurate result [57].

English or Chinese studies on the role of circulating miR-31 expression in the development of human cancer were searched in EMBASE, Cochrane Library, PubMed, Wanfang databases, and China National Knowledge Infrastructure with key words (cancer or carcinoma or tumor or neoplasm or adenocarcinoma) and (microRNA-31 or miRNA-31 or miR-31) and (serum or sera or blood or plasma and “circulating”). The last search date was September 18, 2016. References of retrieved papers and conference reports were also searched to identify relevant studies.

After duplicates removed, titles and abstracts of the searched articles were checked by 6 authors (YM, JL, YL, KL, YC, TW), and then the full text of eligible articles was retrieved. The eligible articles should meet the following criteria: 1) the expression of circulating miR-31 was analyzed by detection/diagnosis or prognosis of cancer in human, 2) for the prognosis analysis, patients were divided into high and low expression groups by the level of circulating miR-31, 3) diagnostic test indexes for detection/diagnosis (sensitivity, specificity, and AUC) or HRs for survival (overall survival [OS], relapse-free survival [RFS], tumor-special survival [TSS], progression-free survival [PFS]) or odd ratios (ORs) for differentiation/LNM were provided or could be calculated from the available data; and 4) the expression of circulating miR-31 was tested by RT-PCR or fluorescence in-situ hybridization. Studies not fulfilling the criteria, reviews, and cell-line studies were excluded. Furthermore, if more than one study of the same cohort was published, only the most recent English publication was included. Consensus in searching and exclusion was resolved by discussion and with 2 other investigators (XC, JC) if needed.

The general data was extracted by 3 authors (YC, HJ, ZS, HW) according to the following form: 1) basic information (first author’s name, published year, region of cohort, cancer type, testing method of miR-31), 2) diagnostic test information (sample size, AUC, sensitivity, and specificity), 3) prognosis information (cases in each group of miR-31 (high/low), cases of differentiation/LNM in each group, and survival results [OS, RFS, TSS, PFS]). Furthermore, the reference for all effects of prognosis (ORs or HRs) was reformatted as low circulating miR-31 expression, and the multivariate analysis effects were chosen for pooled analysis. The quality of diagnostic test studies was assessed by the Quality Assessment of Diagnostic Accuracy Studies 2 (QUADAS2). Newcastle-Ottawa Scale (NOS) was applied to assess the quality of each eligible study in prognosis analysis and the score ≥6 was considered at high quality.

This meta-analysis involved use of Review Manager 5.3 (Cochrane network), Meta-DiSc 1.4, and STATA 14.0. When AUC, HRs and 95% CIs were not provided directly in some studies, Engauge Digitizer 4.1 and Origin 8 were used to analyze AUC as well as HRs and 95% CIs from the ROC and the Kaplan-Meier curve, respectively. The heterogeneity among studies was tested by Inconsistency (I2) and Q tests (chi-square test). If no statistical heterogeneity was found (I2 < 50%, PQ > 0.05), a fixed-effects model was used to estimate the pooled AUC, sensitivity, specificity, PLR, NLR, DOR, OR and HR. Otherwise, a random-effects model was used. Moreover, Begg’s and Egger’s tests were used to assess publication bias, and trim and fill analysis was used to adjust the pooled effects by STATA 14.0 [58]. All tests were two-sided and P< 0.05 was considered statistically significant.

XC conceived of the study. YM, JL, YL, KL, YC, and TW conducted the review and screened records for eligibility. YC, HJ, ZS, and HW extracted data and conducted statistical analysis under the supervision of XC and JC. YM and YC prepared the initial report, which was read and edited by XC and JC. The final manuscript was read and approved by all authors.