A novel role of CKIP-1 in promoting megakaryocytic differentiation

Human hematopoietic cell line K562 has severed as a model to research hematological cell differentiation, which expresses specific markers of granulocytic, monocytic, erythroid, and megakaryocytic lineages. K562 cells are regarded as pluripotent hematopoietic progenitors and can be induced to differentiate following stimulation by a variety of specific agents [6, 7]. Treatment of K562 cells with phorbol 12-myristate 13-acetate (PMA) induces typical features of megakaryocytic differentiation, including progressive polyploidization, and acquisition of lineage-specific markers [8]. The ploidy of megakaryocytes increases progressively from 8N up to 128N and directly correlates with the ability to produce platelets [9].

Previous studies reported that the PH domain-containing protein CKIP-1 (casein kinase 2-interacting protein-1, also known as PLEKHO1) played a role in the regulation of macrophage homeostasis, tumorigenesis, cardiac hypertrophy as well as cell apoptosis, cell morphology, and the actin cytoskeleton [10–18]. Our previous in vivo studies demonstrated that CKIP-1 depletion in mice manifested an age-dependent accumulation in bone mass due to increased osteoblast differentiation [19] and those mice were also susceptible to pressure overload-induced pathological cardiac hypertrophy involved in the HDAC4-dependent pathway [20]. We recently found that CKIP-1 was a novel regulator of macrophage homeostasis via M-CSF signaling by interacting with TRAF6 and inhibiting Akt activation [21].

Upregulation of CKIP-1 during megakaryocytic differentiation induced by PMA

To determine whether CKIP-1 is involved in hematopoietic differentiation, K562 cells were stimulated with PMA to promote megakaryocytic differentiation and expression levels of CKIP-1 were detected. Treatment with PMA led to a dramatic increase of CKIP-1 protein levels in K562 cells and this increase was time- and dose-dependent (Figure 1A and 1B). Then we performed real-time PCR analysis on mRNA levels of CKIP-1 and found that the upregulation of CKIP-1 induced by PMA was at least partially due to the increased accumulation of its mRNA (Figure 1C). To explore the mechanism of PMA-induced CKIP-1 upregulation, K562 cells were pretreated with actinomycin D (Act D), which has the ability to inhibit cellular transcription, and the induction of CKIP-1 mRNA expression by PMA was blocked (Figure 1D), indicating that CKIP-1 gene expression may be upregulated by PMA via transcriptional regulation. Differences in CKIP-1 expression in hematopoietic cells during differentiation suggested a potential role of CKIP-1 in megakaryocytic differentiation. 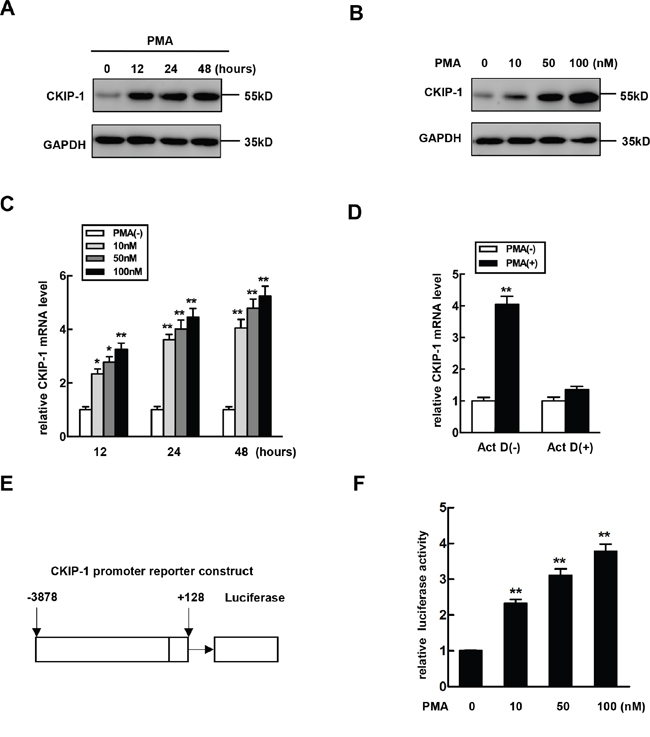 To further investigate whether the induction of CKIP-1 mRNA expression by PMA occurred through the regulation of CKIP-1 promoter, we constructed a reporter plasmid which consisted of CKIP-1 promoter region (−3878 to +128) linked to a promoter-less luciferase vector pGL3-basic (pGL3-(3878/+128)) (Figure 1E) and this reporter plasmid was transiently transfected in K562 cells to examine the effect of PMA on promoter activity. Luciferase reporter assays showed a significant increase in CKIP-1 promoter activity in a dose-dependent manner in PMA-treated cells (Figure 1F).

Based on the previous reports suggesting that transcription factor GATA-1 is involved in erythro-megakaryocytic differentiation [22–25], we investigated the potential role of GATA-1 in the PMA-mediated regulation of CKIP-1. The pGL3-(-3878/+128) construct CKIP-1 promoter was cotransfected with GATA-1 (pcDNA3.1-GATA-1). As shown in Figure 2A, GATA-1 negatively regulated CKIP-1 promoter activity in a dose-dependent manner. Stimulation of K562 cells with PMA caused a significant reduction of GATA-1 (Figure 2B), while PMA treatment led to an increase of CKIP-1. To further investigate the effect of downregulation of GATA-1 on CKIP-1 expression, RNA interference assay was performed in K562 cells to explore whether decreased GATA-1 expression altered expression of CKIP-1. After transfection with siRNA targeted to GATA-1 into K562 cells, the levels of GATA-1 protein were reduced in a time-dependent manner and the protein levels of CKIP-1 were upregulated concomitantly with GATA-1 down-expression (Figure 2C). In K562 cells transfected with siRNA targeted to GATA-1, luciferase activity assay also confirmed the increased promoter activity of CKIP-1 (Figure 2D), suggesting that GATA-1 modulated the expression of CKIP-1. 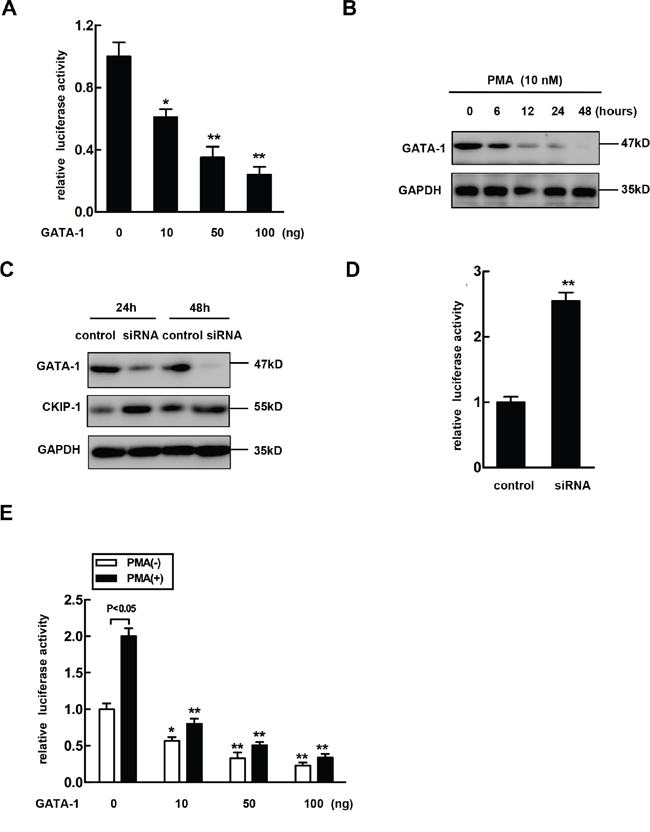 Next we further examined the role of GATA-1 in PMA-mediated induction of CKIP-1 expression. The pcDNA3.1-GATA-1 plasmids or the control and the pGL3-(-3878/+128) CKIP-1 promoter construct were cotransfected into K562 cells. Then the luciferase activities were measured after the cells treated or untreated with PMA for 24 hours. As shown in Figure 2E, overexpression of GATA-1 provided partial but significant inhibition of PMA-mediated induction of CKIP-1 promoter activity.

We had identified an expression pattern for CKIP-1 regulated by transcription factor GATA-1. To investigate this idea, reporter plasmids containing progressively smaller portions of the -3.8 kb fragment of CKIP-1 promoter were cloned, sequenced and the activities were analyzed in K562 cells by the luciferase reporter assays. As Figure 3A shows, activity of pGL3-(-3251/+128) was significantly lower compared to pGL3-(-2616/+128), which suggested the presence of negative regulatory cis element between −3251 bp and −2616 bp of the CKIP-1 promoter. Sequence analysis revealed that in the region of −3251 kb to −2616 kb of CKIP-1 promoter there are two consensus GATA-1 binding sites (WGATAR) [26, 27] at –3122/-3119 and -2984/-2981, respectively (Supplementary Figure 1). 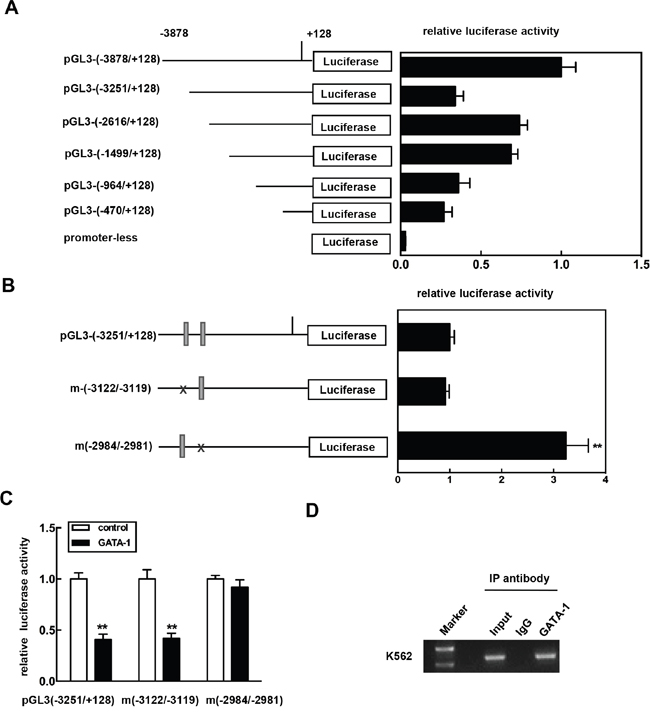 To confirm the role for GATA-1 in regulating CKIP-1, we prepared chromatin immunoprecipitation (ChIP) assays in K562 cells to determine whether GATA-1 occupied the CKIP-1 promoter in vivo using the primers located in the region from -3010 to -2789 (P-3010/-2789). As shown in Figure 3D, GATA-1 was found to occupy the region of CKIP-1 promoter and the binding of GATA-1 was only detected in anti-GATA-1 precipitated chromatin fragments and not in normal IgG precipitated chromatin fragments. Collectively, these results indicated that GATA-1 bound the CKIP-1 promoter in vivo and GATA-1 might regulate CKIP-1 expression through a direct way. 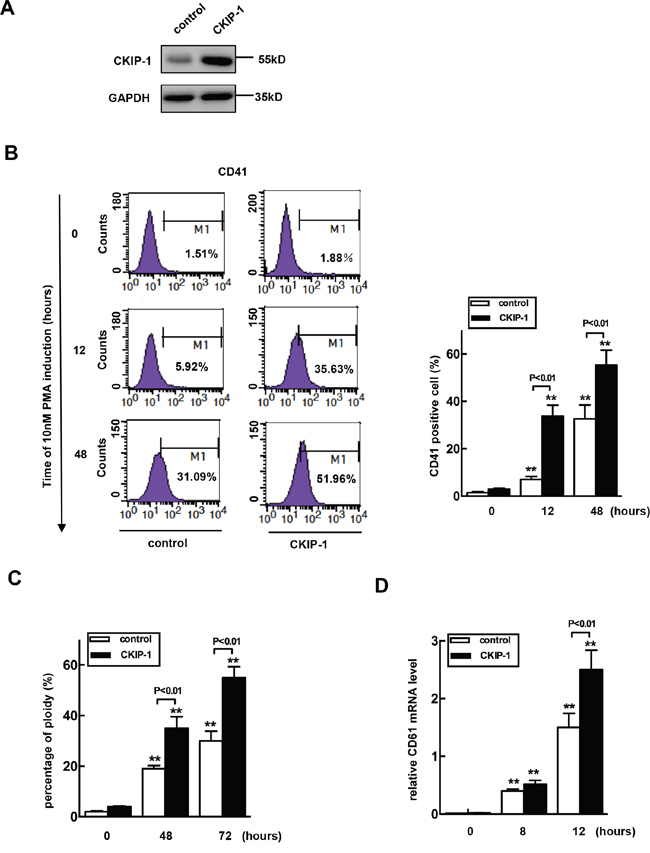 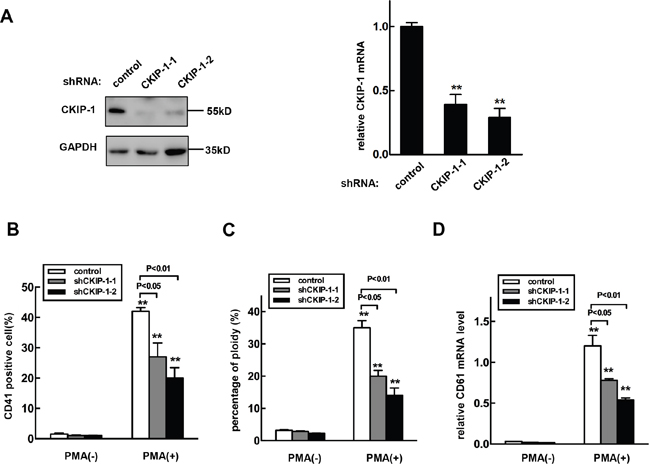 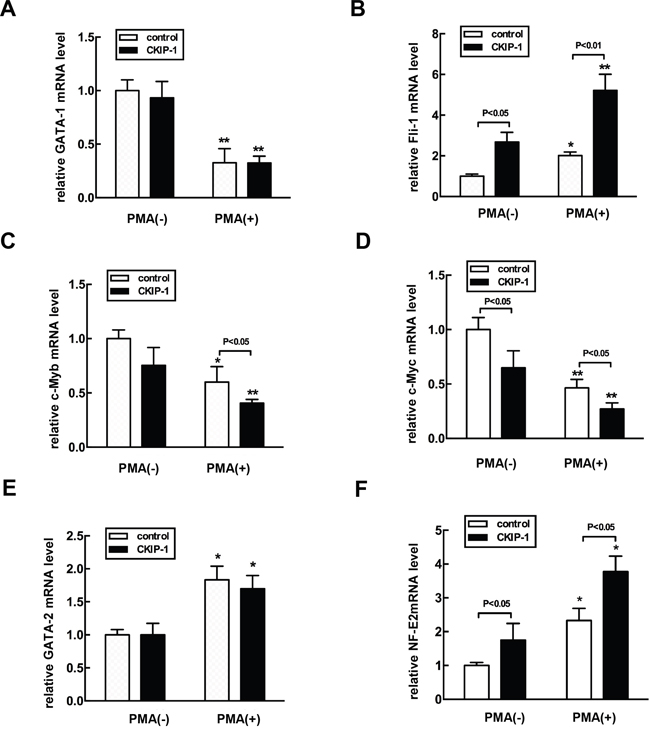 Decreased number of megakaryocytes and platelets in CKIP-1-/- mice 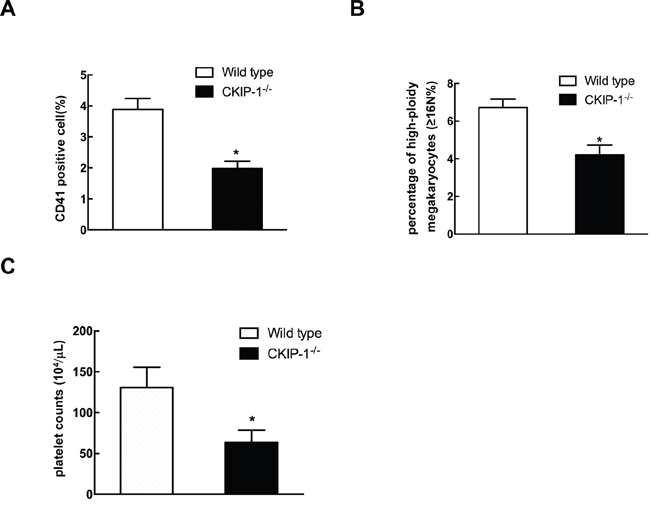 In this study we showed that CKIP-1 was a new regulator of megakaryocytic differentiation. CKIP-1 was originally identified as an interactive protein of casein kinase 2a13. Our previous studies demonstrate that CKIP-1 is a critical regulator of pathological cardiac hypertrophy and macrophage proliferation. Data of the present study has showed that expression of CKIP-1 was strongly increased during megakaryocytic differentiation induced by PMA in hematopoietic progenitor cell lines K562, and the PMA-induced upregulation of CKIP-1 was mediated through the downregulation of GATA-1, which is a lineage specific transcription factor. K562 cells constitutively expressed GATA-1, and GATA-1 activity was significantly downregulated during megakaryocytic differentiation induced by PMA [30]. Treatment with PMA in K562 cells showed induction of CKIP-1 transcription in a dose-dependent manner. The levels of upregulated CKIP-1 expression in K562 cells treated with PMA were concomitantly with GATA-1 down-expression and decreased GATA-1 expression by siRNA directed against GATA-1 in K562 cells increased expression of CKIP-1. The PMA-mediated expression induction of CKIP-1 was inhibited by restored expression of GATA-1 in K562 cells. Taken together, this upregulation expression of CKIP-1 mediated by PMA may be linked to transcriptional control by GATA-1. Our previous studies have identified CKIP-1 as a novel substrate of GSK3β and GSK3β inhibits CKIP-1 through phosphorylation followed by ubiquitination and proteasomal degradation [15]. To the best of knowledge, this is the first report of transcriptional regulation of CKIP-1 and GATA-1 may be the first identified transcription factor of CKIP-1. Compared with full-length GATA-1, GATA1s has a reduced transactivation potential because of the absence of the N-terminal transactivation domain [31] and this isoform was linked to a highly informative pair of disorders—transient abnormal myelopoiesis (TAM) [32] and acute megakaryoblastic leukaemia (AMKL) [31, 33]. In our present studies, we mainly focused on relationship between full length of GATA-1 and CKIP-1. However, it is of great value that to investigate the GATA1s-CKIP-1 regulation and we will continue to explore this question in the future.

Noted the leukemia origin of K562 cells, we also detected the expression of CKIP-1 during megakaryocytic differentiation of human CD34+ hematopoietic progenitor cells, and upregulation of CKIP-1 expression level was observed. CKIP-1 knockout mice showed decreased numbers of bone marrow-derived CD41+ cells and decreased circulating platelet levels when compared to wild-type littermates. However, due to the deficiency of CKIP-1 in all cells in knockout mice and CKIP-1 was known to regulate macrophage proliferation, osteoporosis and many other processes, it is possible that CKIP-1 depletion in other cells other than hematopoietic cells participate the differentiation of megakaryocytes, which need to be further investigated.

Taken together, we provided the first line of evidence that CKIP-1 regulated megakaryocytic differentiation and CKIP-1 knockout mice showed defective megakaryopoiesis and platelet production, suggesting a novel role for CKIP-1 in hematopoietic differentiation.

Human hematopoietic cell line K562 was cultured in RPMI1640 medium (Gibco), supplemented with 10% fetal bovine serum (FBS) and 1% penicillin and streptomycin sulfate. Cells were incubated at 37°C in a humidified chamber with 5% CO2. When megakaryocytic differentiation was induced, K562 cells were treated with PMA (Sigma-Aldrich) at the indicated concentration for the indicated time. Megakaryocytic differentiation was assessed by analyzing CD41 positive cells and assessing the relative number of 4N cells [38] in K562 cells, and the CD61 mRNA level was detected by real-time PCR. Act D was purchased from Sigma-Aldrich.

Human genomic DNA was amplified by PCR using a common reverse primer complimentary to DNA sequence 128 base pairs (bp) upstream of the translation start site in the CKIP-1 gene, and various forward primers truncated at −3878, −3251, −2616, −1499, −964 and −470 (Supplementary Table 1). These DNA fragments were then cloned into a promoter-less luciferase vector pGL3-basic (Promega) via SacI and Xhol cleavage sites. Oligonucleotide-directed mutagenesis with the overlap extension PCR amplification method was used to mutate the two GATA-1 binding sites in the context of pGL3-(−3251/+128) at –3122/-3119 (TTTTATCTCT→TTTGCCATCT) and -2984/-2981 (TCTTATCCTC→TCTGCCACTC), and verified by DNA sequencing.

Cells (2×105 cell per well in 6-well plates) were transfected with Lipofectamine™ 2000 transfection reagent (Invitrogen) following the manufacturer’s instructions. Briefly, cells were transfected with 2μg of each construct reporter plasmid and pRL-TK vector was cotransfected which led to the constitutive expression of Rennila luciferase. Luciferase activity was assessed by Dual-Luciferase® Reporter Assay System (Promega) 24 hours after transfection according to the manufacturer's instructions.

ChIP assays were performed as described [39]. K562 cells were used for the crosslinking with formaldehyde. For the immunoprecipitation, normal IgG or anti-GATA-1-antibody (Santa Cruz) was added and incubated at 4°C overnight. Immunocomplexes were extracted and crosslinking was reversed at 65°C overnight. Protein was digested with proteinase K at 45°C for 2 hours. DNA was purified by phenol/chloroform extraction and ethanol precipitation. Primer sequences are listed in supplementary Table 1.

CKIP-1−/− mice generated as previously described [19] were bred and housed in specific pathogen-free facilities. All experimental procedures in mice were approved by the Laboratory Animal Center of Chinese Academy of Military Medical Sciences.

Bone marrow cells isolated from wild-type and CKIP-1-/- mice were made into single-cell suspensions in FACS buffer (cold PBS supplemented with 1% FBS). Cells were stained on ice with CD41-PE (BD Pharmigen) or control antibody for 30 min. The stained cells were washed twice in FACS buffer and FACS analyses were done on FACSCalibur (BD Biosciences). Data were analyzed with the FlowJo software (Treestar). For ploidy analysis, murine megakaryocyte cells labeled with anti-CD41-PE were fixed for 15 min at room temperature in 0.5% paraformaldehyde in PBS, permeabilized in 70% ethanol, and stained with propidium iodide (PI).

Data are presented as mean ±SEM. The statistical significance of differences was evaluated with the Student’s t test or a one-way analysis of variance (ANOVA). Significance was accepted at the level of p < 0.05. In all experiments, the number of asterisks represent the following: ***p < 0.001, **p < 0.01, *p < 0.05.