The invasion and metastasis of melanoma is the main reason for patient death, and badly threatens patients' life safety [1]. The invasion and metastasis of tumor include multiple processes, of which cell movement is a must [2, 3]. Factors influencing cell movement will inevitably influence the migration and invasion of the tumor [4]. Strenuous recombination of cytoskeleton can influence the cell movement. Rho GTPases family is a key regulatory factor of cytoskeleton recombination.

In recent years, abnormal expression of Rho GTPase has been found in many malignancies. The cell movement mediated by Rho GTPase plays an extensive and important role in the invasion and metastasis, malignant transformation, regulation and proliferation of malignant cells as well as tumor angiogenesis [5]. The relationship between Rho GTPase family and melanoma has been reported occasionally. However, the expression of the whole family in melanoma cell lines, the relationship between Rho GTPase family and cytoskeleton, cell migration and invasion ability, and possible mechanisms remains unclear.

Therefore, the present study observed the differences in morphology and cytoskeleton between three types of melanoma cells (M14, A375 and MV3) and MC, investigated the movement and migration ability of 4 types of cells by Transwell chamber, and studied the transcription of Rho GTPases family and the expression of certain proteins in its downstream by QPCR and Western blot, respectively, so as to elaborate the role of Rho GTPases in the invasion and migration of melanoma cells and its molecular mechanism.

Morphology of MC and melanoma cells

As shown in Figure 1, MC, M14, A375 and MV3 had different morphology. MC had small body, and generally had 2-3 thin and symmetrical lamellipodia. A375 and M14 were spindle in shape and had wide lamellipodia at both ends. MV3 cells had fried egg shaped appearance. 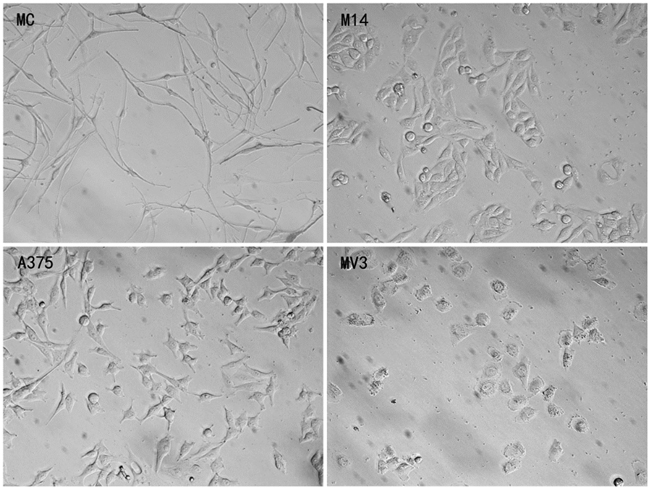 Figure 1: Morphology of 4 types of cells observed under the Hoffman microscope.

Similarities and differences of cytoskeleton were observed after immunofluorescence staining 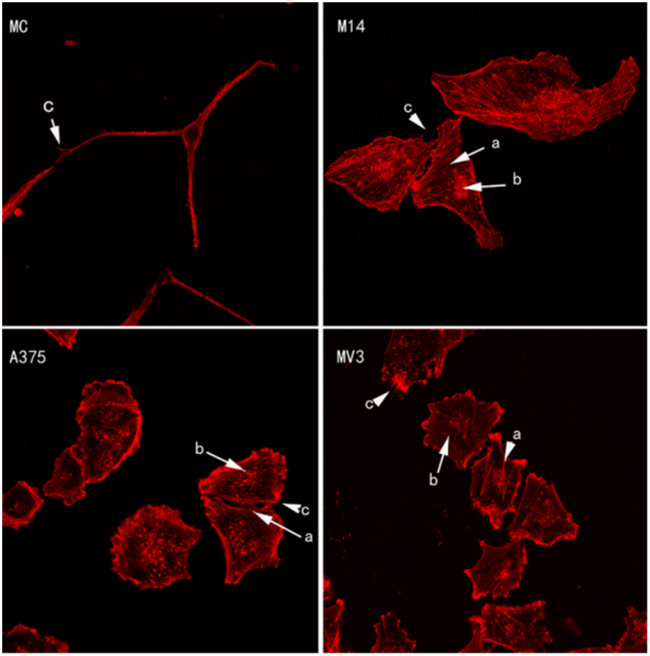 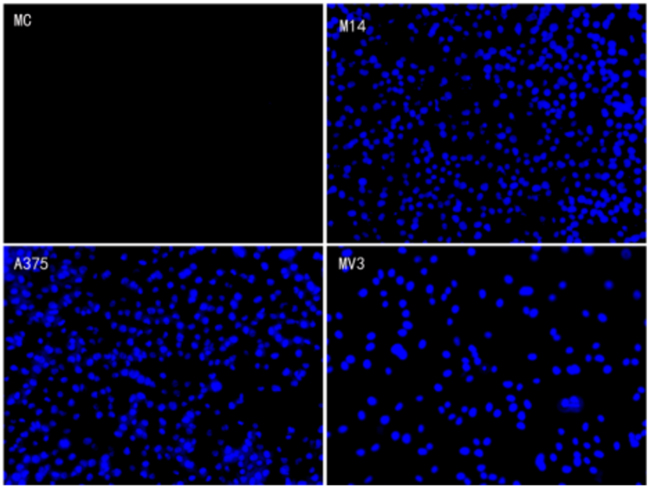 Figure 3: Comparison of invasion ability of 4 types of cells. 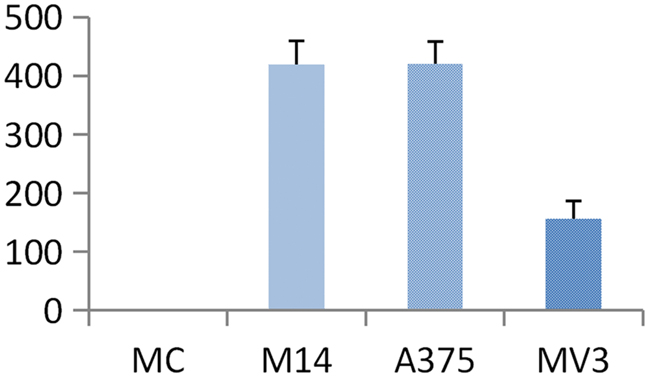 Figure 4: Transmembrane number of 4 types of cells in the migration test.

Figure 5: Differences in Rho subtribe and Rnd subtribe transcription among 4 types of cells. 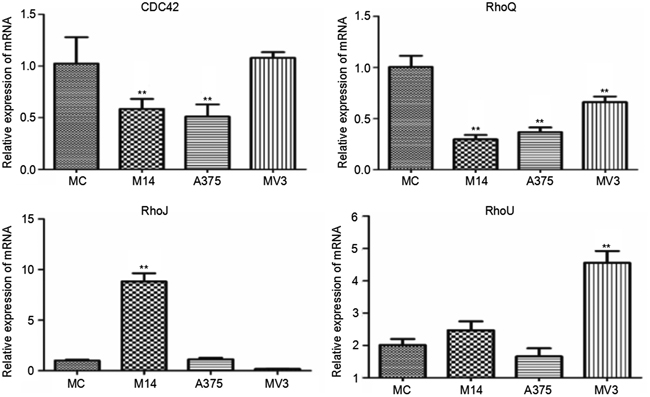 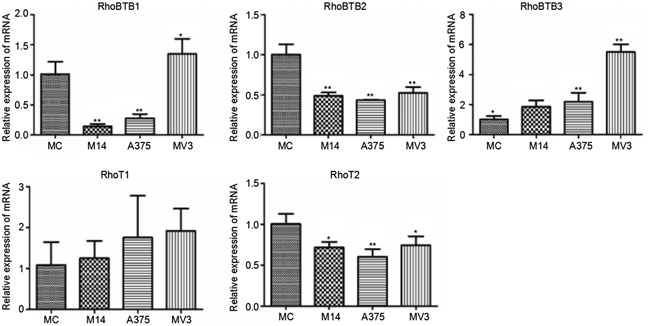 WB results indicated that RhoD was the most special member. Literatures reveal that RhoD plays an important role in the migration and invasion of cells. As shown in Figure 10, the difference in RhoD protein was the same as the difference in the transcription level. RhoD was rarely expressed in melanoma cells, which was significantly lower than RhoD expression in MC. The expression of Diaph2, a downstream effector molecule of RhoD, was consistent with the expression of RhoD.

There are only a few studies describing the influence of Rho GTPases family on the migration and invasion of melanoma through cytoskeleton. Our results indicated that Rho GTPases and filopodia, lamellipodia, stress fibers & adhesion plaque (the microfilament is the main constituent) showed significant and regular change in melanoma cells and MC.

Rho subtribe (including RhoA, RhoB and RhoC) is related to the formation of stress fibers and adhesion plaque, etc. [6]. QPCR results indicated that the expression of RhoA, RhoB and RhoC reduced in melanoma cells. Therefore, we conjecture that they contribute a little to the formation of stress fibers and adhesion plaque in MC and melanoma cells, but they may play other roles. A study shows that RhoA can regulate the expression of CD70--a TNF family. RhoA silencing can lead to the expression decline of CD70, while the overexpression of RhoA can induce the significant increase of CD70 expression [7], suggesting that RhoA may be related to the inhibition of melanoma. RhoB is a tumor-inhibiting factor as indicated by many studies [8]. The present study also found its reduced expression in tumor cells. Another report showed that overexpression of Rho subtribe can inhibit the expression of P21 (a tumor-inhibiting factor). These data reveal the precise regulation of cells. They also show that Rho subtribe may play a certain role in the inhibition of melanoma cells.

Rac subtribe (including Rac1, Rac2, Rac3 and RhoG) is related to the formation of lamellipodia and adhesion plaque. The expression levels of Rac2, Rac3 and RhoG were high in MV3, but extremely low in other cells, suggesting that these three had few effects on these cells. Although the Rac1 expression declined in M14 and A375 cells, the overall transcription level of Rac1 was very high. Although Rac1 can promote the formation of stress fibers and adhesion plaque, Rac1 overexpression can inhibit the migration and invasion of melanoma cells [9]. In addition to the above-mentioned function, Rac1 is also related to the stability of microtubules [10]. Quantitative data show that Rac1 is increased in MC, suggesting that its increase can increase the stability of microtubules. However, cell movement needs high degree of microtubule recombination. Therefore, we conjecture that the decrease of Rac1 expression promotes high degree of microtubule recombination in melanoma cells, and further promotes the migration and invasion ability of melanoma cells. Other members of Rac subtribe are highly expressed in MV3. On one hand, the migration and invasion ability is influenced by the stability of microtubules. On the other hand, their expressions promote the formation of lamellipodia in MV3 cells, which may be the reason why the lamellipodia of MV3 is significantly different from other groups.

RhoD is closely related to stress fibers and adhesion plaque [12]. RhoD was highly expressed in MC, but was not expressed in melanoma cells. DIAPH2 is the downstream effector of RhoD. Western blot results indicated that the expression of RhoD and DIAPH2 proteins was consistent with the transcription level of RhoD. This indicates that RhoD can regulate the formation of stress fibers and adhesion plaque through DIAPH2, and influence the migration and invasion of melanoma cells. We also conducted relevant further study. After the overexpression of RhoD, we found the followings: the stress fiber of A375 became thin and weak; the adhesion plaque increased; the migration and invasion of A375 were inhibited. These results are the same as our expectation.

RhoH can inhibit the polymerization of microfilaments [15]. QPCR results indicated that RhoH expression was higher in MC than in M14, A375 and MV3. This suggests that RhoH inhibits the polymerization of microfilaments in MC, decreases the formation of stress fibers and adhesion plaque, reduces the power of cell migration, leads to the loss of anchorage force by cells, and further influences the cell migration.

In addition to the above-mentioned Rho GTPases members, some members of RhoBTB subtribe and Miro subtribe also displayed regular change as indicated in QPCR detection. However, whether they are related to the cytoskeleton change or not remains unclear at present. RhoBTB subtribe is related to the formation of tumor cells. RhoBTB1 and RhoBTB2 are highly homologous [16, 17]. QPCR results indicated that RhoBTB1 and RhoBTB2 jointly influenced the formation of M14 and A375, while only RhoBTB2 influenced the formation of MV3 cells. There is no report on the function of RhoBTB3 yet. We can see from QPCR results that RhoBTB3 also plays an important role in 3 types of melanoma cells, especially in MV3.

Morphology was observed by the Hoffman microscope

The morphology was observed when 4 types of cells were in good condition.

Cytoskeleton was observed after the staining by phalloidin labeled by rhodamine

Four types of cells were digested and resuspended. The 24-well plate was used. 500μl serum-free medium was added until just reaching the bottom of Transwell. Twenty thousand cells were mixed with 500μl medium containing 10% serum. Cells were inoculated to the upper Transwell chamber. Cells were cultured for 5h in an incubator until full adherence. The medium was removed. Serum-free medium was added to the upper Transwell chamber. The medium containing 10% serum was added to the lower chamber. The system was cultured overnight. 4% paraformaldehyde was added for 30-min fixation. Cells inside the upper chamber were removed by the cotton swab. DAPI staining for 10min was conducted. Cells were washed 6 times by pure water (5min/time). The quantity of nuclei was observed under the inverted fluorescence microscope and calculated.

Total protein of cells was extracted. The total protein concentration was detected. Equivalent samples were subjected to SDS-PAGE gel electrophoresis and transfer. After the addition of primary antibodies with different concentrations, the protein was incubated at 4°C overnight. After washing, the incubation with secondary antibodies under room temperature for 1.5h was conducted. β-actin served as the internal reference.

Data were presented as mean ± standard deviation. One-way ANOVA was adopted for the statistical analysis. A P<0.05 indicated significant difference. The statistical software of SPSS19.0 was adopted.