Coronary heart disease (CHD) is a common complex disease resulting from the interaction of multiple environmental and genetic factors. To assess the potential relationship of vascular endothelial growth factor (VEGFA) rs699947 C>A, rs3025039 C>T and rs2010963 G>C polymorphisms with CHD risk, a comprehensive meta-analysis was conducted. A systematic search of EMBASE and PubMed online database for publications on VEGFA polymorphisms and risk of CHD was carried out. Crude Odds ratios (ORs) with their 95% confidence intervals (CIs) were calculated to determine the association. A total of ten publications including 22 trails involving 2097 cases and 2867 controls were included in our pooled analysis. Overall, results of the present meta-analysis demonstrated a significant association between VEGFA rs699947 C>A polymorphism and an increased risk of CHD. After stratifying by ethnicity and CHD type, the association was also obtained. A significant association between VEGFA rs3025039 C>T polymorphism and risk of CHD was also found. For VEGFA rs2010963 G>C polymorphism, the polymorphism was associated with MI risk. In conclusion, our findings suggest that VEGFA rs699947 C>A, rs3025039 C>T and rs2010963 G>C polymorphisms are risk factors for CHD. In the future, large sample size and well-designed epidemiologic studies are needed to confirm these conclusions.

Coronary heart disease (CHD) is one of the leading causes of mortality and morbidity worldwide [1, 2]. Besides environmental risk factors (e.g. smoking, drinking, and sedentary lifestyle et al.), genetic factors, such as single-nucleotide polymorphisms (SNPs), may play prominent roles in the development of CHD [3].

Vascular endothelial growth factor (VEGFA) is a glycoprotein molecule generated by the vascular endothelium, retinal pigment epithelium, pericytes, T cells and macrophages et al [4]. VEGFA, one of the most potent mitogens, acts as an important promoter of angiogenesis in both lymphogenesis and angiogenesis [5, 6]. It was reported that inflammation and neovascularization in atheromatous plaques might be mediated by VEGFA [7]. Previous study also found that increased plasma VEGFA levels in CHD patients may indicate the severity of coronary lesion, and it may be adopted as an indicator of the need for revascularization [8, 9]. These results suggested that VEGFA might be involved in the development of CHD.

Table 1: Characteristics of the eligible studies in the meta-analysis 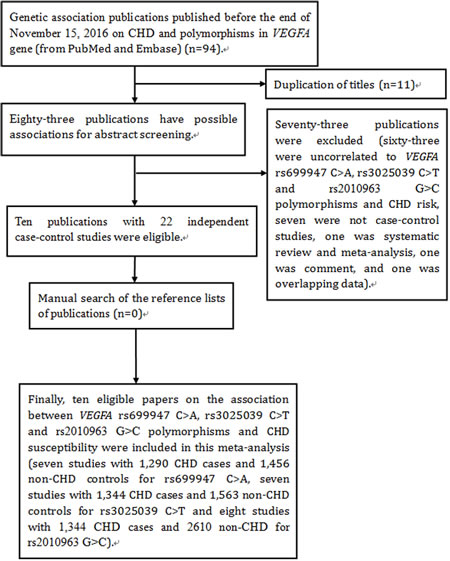 Table 5: Meta-analysis of the VEGFA rs699947 C>A polymorphism and CHD 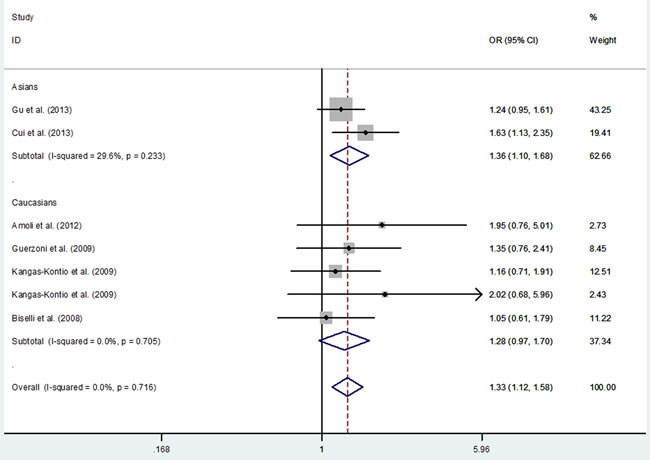 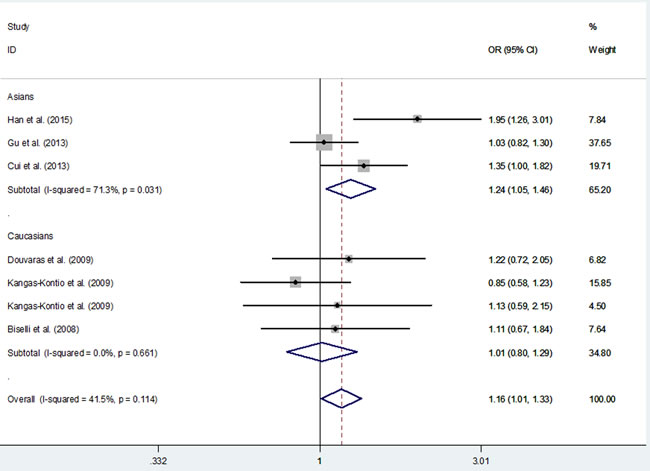 Table 6: Meta-analysis of the VEGFA rs3025039 C>T polymorphism and CHD 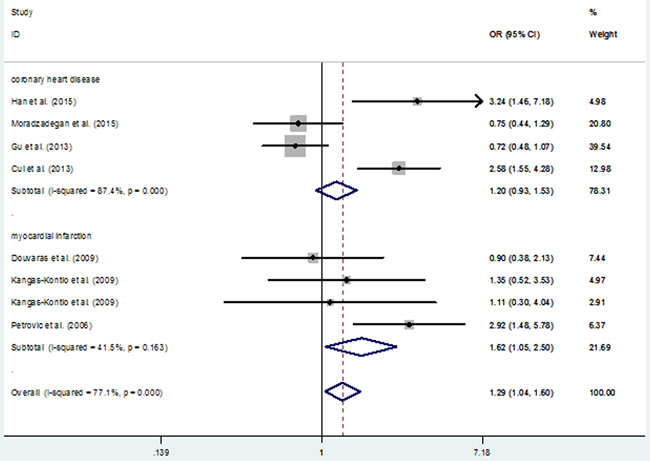 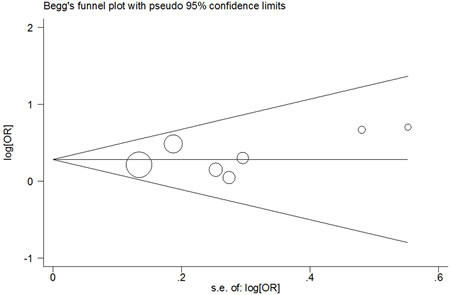 Figure 5: Begg’s funnel plot of meta-analysis for the association between VEGFA rs699947 C > A polymorphism and CHD risk (AA+CA vs. CC genetic model). 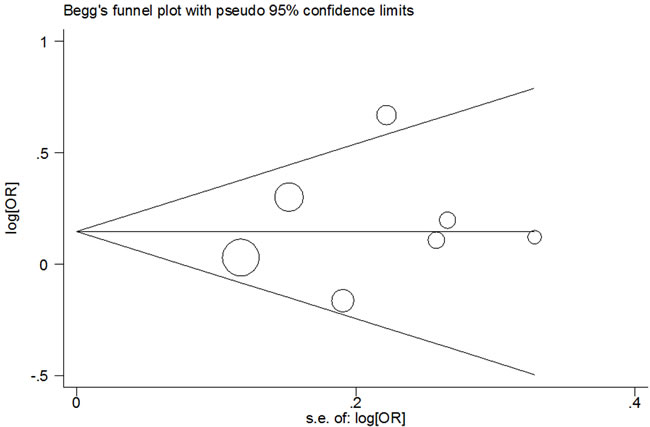 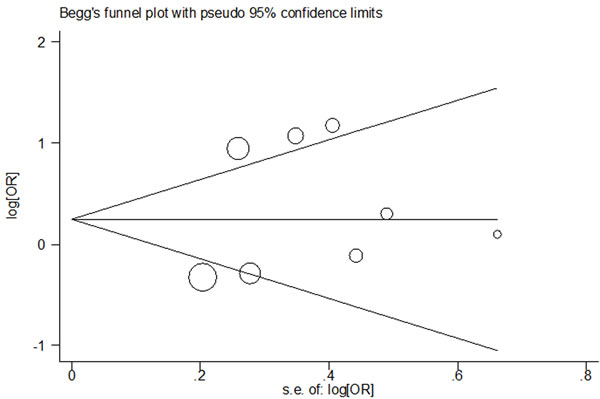 An independent study involved in the present pooled-analysis was omitted each time to assess the influence of the data-set on the pooled ORs, and the exclusion of anyone did not materially alter the corresponding pooled ORs (Figure 8, Figure 9 and Figure 10, data not shown). 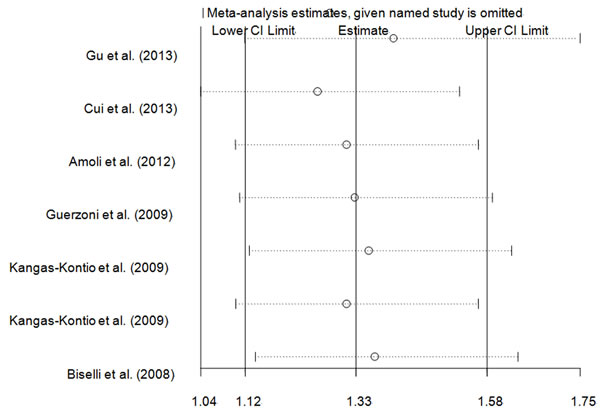 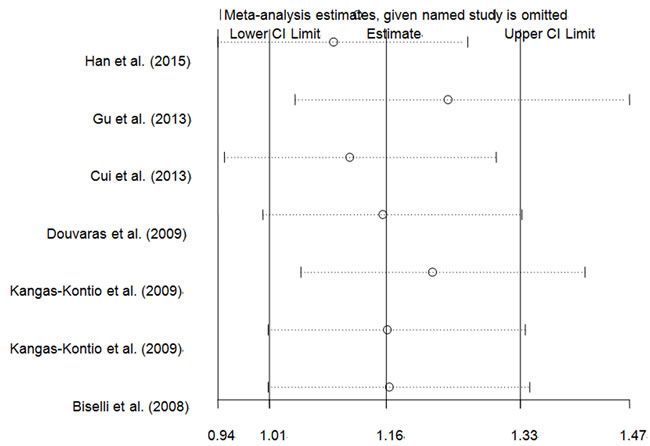 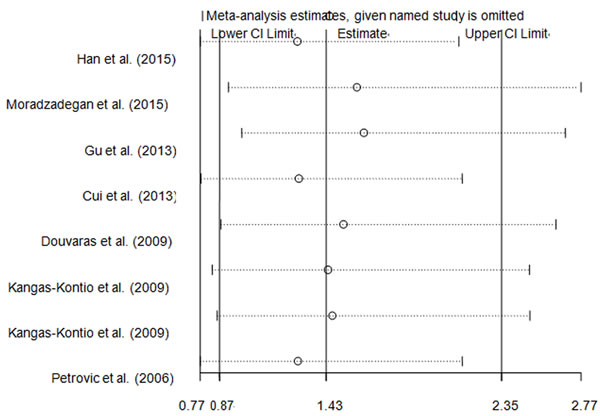 We used Newcastle-Ottawa Quality Assessment Scale to assess the quality score of the eligible studies. When scores ≥ 7 stars, the study was considered as high-quality. The results indicated that all included studies were high-quality, suggesting the reliability of our findings (Table 8).

Besides environmental risk factors (e.g. smoking, drinking, and sedentary lifestyle et al.), multiple evidences support a vital role of genetics in determining susceptibility for CHD. The involvement of VEGFA in inflammation and neovascularization may underlie the major mechanism responsible for the association between VEGFA genotypes and risk of CHD. Recently, several investigations on the molecular epidemiology considering on the correlation of VEGFA polymorphism with CHD risk were performed; however, the findings remained conflicting. With respect to VEGFA polymorphisms, a recent systemic review and meta-analysis with small sample sizes on this issue did not suggest any association between VEGFA rs699947 C > A polymorphism and risk of CHD [14]. After that, some case-control studies reported that rs699947 C > A polymorphism in VEGFA gene have been implicated in CHD risk, especially in Asians. Thus, we conducted a meta-analysis involving a total of 2097 CHD cases and 2867 controls subjects from ten publications including 22 trails to assess the potential associations between two commonly functional SNPs (rs699947 C > A, rs3025039 C > T and rs2010963 G > C) in VEGFA gene and CHD risk.

In conclusion, our findings indicate that VEGFA rs699947 C > A, rs3025039 C > T and rs2010963 G > C polymorphisms may be risk factors for the development of CHD. As the participants in some subgroup are currently limited, further well-designed studies with larger sample size to investigate the role of these loci are needed. Moreover, interactions of gene-gene and gene-environment should not be ignored.

Genetic association publications published before the end of November 15, 2016 on CHD and polymorphisms in VEGFA gene were retrieved through a search of PubMed and EMBASE online databases with keywords: (vascular endothelial growth factor-A or VEGFA) and and (polymorphism or variant or SNP) and (coronary artery disease or CAD or coronary heart disease or CHD or myocardial infarction or MI). All bibliographies cited in eligible publications, reviews and meta-analysis were examined to retrieve the potential publications.

The major criteria of eligible studies were: (a) studies focused on the relationship of VEGFA rs699947 C > A, rs3025039 C > T and rs2010963 G > C polymorphisms with CHD risk; (b) sufficient data were presented to determine the odds ratios (ORs) with their 95% confidence intervals (CIs) and P value, and (c) the genotyping method, equipment, and protocols used or provided reference were described in publication. Accordingly, publications providing insufficient data, CHD treatment, not case-control design, overlapping data, reviews and meta-analysis were excluded.

Two authors (Y. Wang and Q. Huang) reviewed and collected information independently from eligible studies in accordance with the major criteria for inclusion and exclusion mentioned above. The following data: the surname of first author, year of publication, country, ethnicity of the participants, type of CHD [myocardial infarction (MI) or non-MI], genotyping method as well as allele and genotype frequencies, were entered into a database. In case of conflicting evaluations, disagreements over study/data inclusion were resolved by a discussion among all reviewers.

The Newcastle-Ottawa Quality Assessment Scale was harnessed to assess the quality score of the eligible studies. And scores ≥ 7 stars were considered as high-quality study [15].

A Goodness-of-fit chi-square calculator (http://ihg.gsf.de/cgi-bin/hw/hwa1.pl) was used to examine the deviation from HWE in controls. The strength of correlation between SNPs in VEGFA gene and CHD risk was assessed by ORs with the corresponding 95% CIs. Type of CHD (MI or non-MI) and ethnicity were considered as characteristics for evaluation of potential heterogeneity. Ethnicity group was defined as Asians and Caucasians. We used Chi-square based I2-statistic test and Q statistical test to analyze the potential heterogeneity among the studies. P < 0.10 or I2 > 50% indicates high heterogeneity, random-effects model (the DerSimonian and Laird method) was used to calculate the pooled ORs and CIs [16]; otherwise, the fixed-effects model (the Mantel-Haenszel method) was used [17]. Funnel plots and Egger’s regression test were harnessed to diagnose the potential publication bias [18], and a P < 0.1 was defined as statistical significance. Sensitivity analysis, which assessed the influence of each independent study on the pooled ORs with their corresponding 95% CIs, was also carried out to evaluate the stability of our results. All P values were defined as two-sided at the P = 0.05 level. All data analysis was performed with Stata 12.0 software for windows (Stata Corporation, College Station, TX).

This study was supported by Fujian Province health department fund for innovation in medicine (2007-CX-16).