Effect of marital status on the survival of patients with gallbladder cancer treated with surgical resection: a population-based study

*These authors are contributed equally to the work

Marital status has been reported as an independent prognostic factor for survival in various cancers, but it has been rarely studied in gallbladder cancer treated by surgical resection. We retrospectively studied Surveillance, Epidemiology, and End Results (SEER) population-based data and identified 9,041 cases of gallbladder cancer with surgical treatment between 1988 and 2013. The patients were categorized according to marital status, as “married,” “never married,” “widowed,” or “divorced/separated.” Patients in the widowed group had a higher proportion of women within-group comparisons, a higher rate of white race, a greater proportion of older (≥ 60 years) patients, more frequency of adenocarcinoma, a greater number of tumors at well/moderate pathological grading, and more prevalence at the localized SEER stage, all of which were statistically significant (P < 0.001). Marital status was confirmed to be an independent prognostic factor by multivariate analysis (P < 0.001). Married patients had higher 5-year gallbladder cancer cause-specific survival than unmarried patients (P < 0.001); conversely, widowed patients had the lowest gallbladder cancer cause-specific survival compared with all other patients. Conclusions marital status is an important prognostic risk factor for survival in patients with gallbladder cancer treated with surgical resection. Widowed patients have the highest risk of death compared with other groups.

Gallbladder cancer (GBC) is the most common biliary tract neoplasm worldwide and is a rare but a fatal malignancy characterized by poor prognosis and absence of effective therapy [1]. Surgery is the only definitively curative treatment [2]. However, even after operation, the rate of locoregional recurrence is high. It has considerable wide geographic and ethnic variation with distinctive pockets of high incidence in Eastern and Central Europe, South and Central America, South Asia, and Japan [3, 4].

Recent literature has demonstrated that marital status is an independent prognostic factor for survival in many cancers [5–8]. Wang et al. reported that marital status was an important risk predictor in pancreatic cancer and that widowed patients were at the highest risk for cancer-specific mortality [7]. Li et al. found that widowed patients with colorectal cancer were at highest risk for death compared with other groups [8]. Few study explored the effect of marital status on GBC survival. Therefore, this study aimed to investigate the relationship between marital status and GBC survival. We selected data from the Surveillance, Epidemiology, and End Results (SEER) cancer registry to study the effect of marital status on GBC cause-specific survival (GCSS) in patients with GBC treated by surgical resection.

†The early and middle Year of diagnosis were all lasted nine years, the latter was lasted eight years

Effect of marital status on GCSS 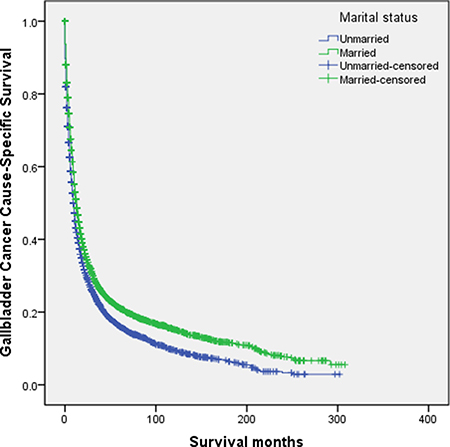 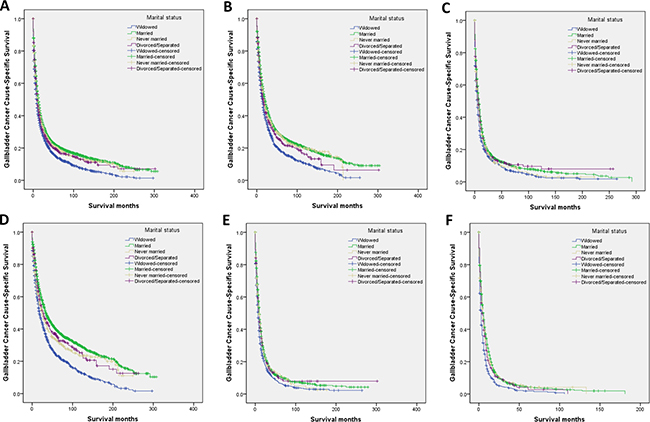 †The early and middle Year of diagnosis were all lasted nine years, the latter was lasted eight years

††3-year CCS. Because TNM stage record according to the AJCC Cancer Staging Manual (7th edition) in the SEER database began from 2009, and ended at 2013, its 5-year CCS did not exist.

Some studies have suggested married patients have longer overall survival and lower mortality than those who have never married, separated, widowed, or divorced for many important causes of death respectively [13–15]. By using the SEER database to determine the relationship between marital status and survival, the present study showed that married patients had significantly better GCSS than their unmarried counterparts. Widowed patients had the lowest GCSS compared with all other patients. Moreover, in multivariable analyses, the risk for widowed patients lasted even after adjusting for age, race, year of diagnosis, histologic type, pathological grading, tumor size, TNM stage,and SEER stage.

Psychosocial factors may provide a reasonable explanation for the relationship between marital status and survival. Although psychosocial factors are regarded as an independent reason, considered separately from tumor biological characteristics and extent of treatment, these may play several important roles associated with cancer progress. Unmarried and especially widowed patients may suffer from a lack of emotional support and social attention (otherwise provided by a spouse), which contributes to more distress, depression, and anxiety than that experienced by their married counterparts [16]. Also, a cancer diagnosis can lead to distress [17]. In widowed patients, increased mortality rates may be due to the inability to relieve stress and the loss of social attention [18].

There is some evidence that the level of physiological stress and depression may affect cancer outcomes via different mechanisms. Increased psychological stress and decreased psychosocial support may contribute to weakened immune function and, in this way, may lead to tumor progression and mortality [21–23]. Reportedly, two meta-analyses showed that depression increased cancer mortality by 19% and 39%, respectively [24, 25]. Furthermore, perceived lack of social support has been proven to destroy the activity of natural killer cells [26]. Also, chronic stress may contribute to downregulated cortisol receptors in white blood cells [27]. This downregulation also degrades the cellular response to anti-inflammatory signals and accelerates cytokine-mediated inflammatory processes [28], which, in colorectal cancer, has been regarded as a poor prognostic factor [29, 30]. Additionally, a previous study reported that some other neuroendocrine mediators and cytokines present in depression, and stress had been associated with cancer metastasis [23]. Finally, depression and poor quality of life may lead to an increased level of vascular endothelial growth, which may promote endothelial cell migration, proliferation, and proteolytic activity [31].

The present study investigated SEER data to evaluate the relationship between marital status and the postoperative prognosis of GBC; however, the study had some potential limitations. First, the SEER database only provided marital status at diagnosis. Marital status may have changed for some patients during the therapeutic process, and these changes may have affected the outcomes. Second, some data of marital status may have been inexhaustive—for example; some married patients may have separated, while other never married patients may have been cohabitating. Third, the quality of a marriage can also affect the survival of GBC patients. Marital distress has also been associated with long-term immune consequences and has contributed to an elevated risk of various health problems [32]. Finally, the SEER GBC database lacks quality data on adjuvant therapy, comorbidities, and recurrence.

To our best knowledge, this is the first report studying the effect of marital status on the survival of GBC patients treated with surgical resection. Despite these potential limitations, our study confirmed that unmarried patients are at greater risk for cancer-specific mortality. Furthermore, we showed that widowed patients were always at the highest risk for death via cancer. Psychosocial factors may be the primary reasons leading to poor survival in unmarried patients. Therefore, to improve postoperative survival, physicians should take into consideration social supports during their care of unmarried patients with GBC and especially of widowed patients. Further clinical trials should be performed to confirm our hypothesis.

We analyzed sex, age, race, primary tumor site, histologic type, pathology grade, tumor size, TNM stage, SEER stage, survival months, vital status, and marital status at the time of diagnosis. The TNM stage according to the criteria described at the American Joint Committee on Cancer (AJCC) Cancer Staging Manual (7th edition) was established. We categorized patients as “never married,” “married,” ”widowed,” or “separated/divorced.” “Unmarried” included “never married,” “widowed,” and “separated/divorced.” The individuals who were separated and who were divorced were grouped together in the group in our study.

The SEER program of the National Cancer Institute is an authoritative source of information on cancer incidence and survival in the United States. The SEER program registries routinely collect patient clinical data including demographics, the tumor morphology and stage at diagnosis, first course of treatment, the follow-up for survival, and so on. SEER currently collects and publishes cancer incidence and survival data from 18 population-based cancer registries that represent approximately 30% of the population in the United States.

We excluded patients who were less than 18 years at diagnosis; did not undergo surgical resection for GBC; had multiple primary cancers, of which the GBC was not the first; and who had an unknown cause of death or unknown survival length.

This work was supported by six kinds of talents of jiangsu province (No. WSW–087).

20. DiMatteo MR, Lepper HS, Croghan TW. Depression is a risk factor for noncompliance with medical treatment: metaanalysis of the effects of anxiety and depression on patient adherence. Arch Intern Med. 2000; 160:2101–2107.

21. Garssen B, Goodkin K. On the role of immunological factors as mediators between psychosocial factors and cancer progression. Psychiatry research. 1999; 85:51–61.