Total Anomalous Pulmonary Venous Return (TAPVR) (OMIM:%106700) is one type of cyanotic Congenital Heart Defects (CHD), in which none of the pulmonary veins connect to the left atrium and are malpositioned to the systemic venous circulation [1] (Figure 1A, 1B). TAPVR characterized by cardiac function deterioration including cyanosis, pulmonary hypertension, dyspnea, pulmonary edema, congestive heart failure affects 1 in 15,000 live births and 48.8% of them will die without surgery before the age of 1 [2]. Although TAPVR generally presents significant fatality rate, the pathogenesis is still vague and become hot research spot. 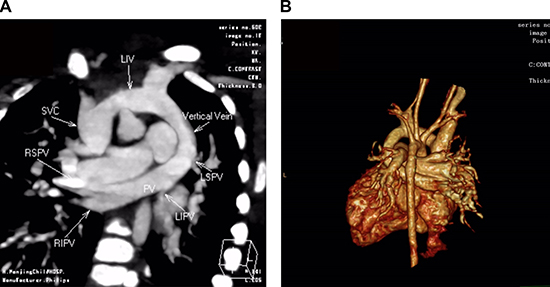 In 1960, Neill et al. described the first case that TAPVR in ‘scimitar syndrome’ [3]. Then, TAPVR has been associated with GATA binding protein 4 (GATA4), Zic family member 3 (ZIC3), and Gap junction protein and alpha 1 (GJA1) [4]. After a de novo 10;21 balanced translocation was reported, Cinquetti et al. defined ANKRD1 as a possible candidate gene for TAPVR in 2008 [5]. Bleyl et al established a locus for TAPVR at 4p13-q12 [6] and found the PDGFRA as a driver gene in the further detailed research [7]. A non-synonymous variant in retinol binding protein 5 (RBP5) by Whole genome sequence (WGS) was analysised in 2 TAPVR patients recently [8]. Nevertheless, the contribution of known genes above was still limited to investigate the genetic cause . Therefore, we applied WES to the investigation of the genetic cause in 6 sporadic TAPVR cases and 81 non-TAPVR controls. We performed independent replication on additional 12 TAPVR patients by Sanger sequencing to identify the possible genetic variants.

We sequenced six sporadic TAPVR cases with mean coverage of 77-fold (~ 8.33 GB Raw data yield per individual with paired-end, 100bp reads) (Supplementary Table 5). About 19,000 (range from 18824 to 19301) primary variants with high quality were identified per individual with standard GATK-haplotype calling process. Mutation screening was carried out according to American College of Medical Genetics (ACMG) criteria guidelines: (i) UTR, synonymous, intronic variants removed; (ii) variants with minor allele frequency (MAF) < 1% from dbSNP 135, 1000 Genomes, ESP and ExAC; (iii) variants completely absent from 81 controls. After filtering, we used a combined strategy to identify potentially causal variants as follows : (i) Loss of function (LOF) variants or not; (ii) Allele frequency in the population; (iii) Homozygous or heterozygous mutations; (iv) Recurrence of the variants in different gene classification [9]. Finally, all the variants were divided into three Parts according to the possibility of pathogenic [10]. In Part I variants, we found two heterozygous missense SNVs: ACVRL1(NM_000020.2): c.C652T,p.R218W and SMAD9(NM_001127217): c.C743A, p.T248K in Patient 5; In Part II variants, SGCD(NM_172244): c.C717G, p.D239E was recurrent heterozygous missense variant in Patient 5, 6; In Part III variants, remaining variants were mainly referring to 62 LOF variants with MAF < 0.1% (Supplementary Table 6). (Figure 2) 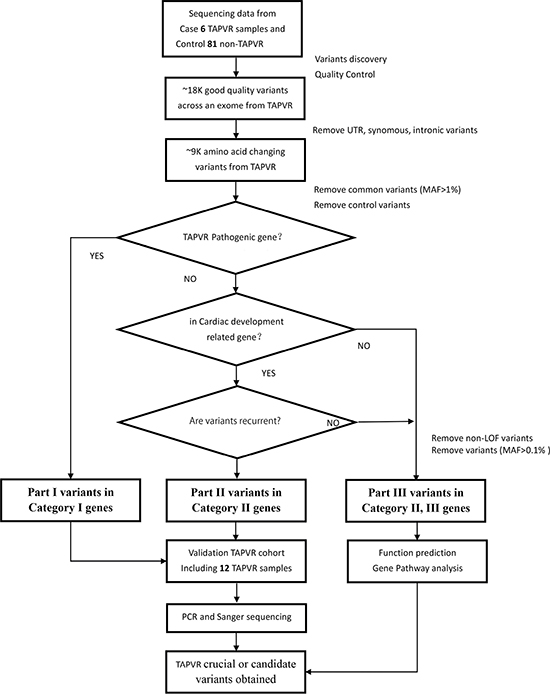 Firstly, mutational impacts in Part I or Part II variants were predicted from tools including SIFT, Polyphen2 and MutationTaster (Table 1). Prediction Scores of ACVRL1: c.C652T with high scores indicated probably or possibly damaging. However, the mutations in SGCD and SMAD9 were predicted as ‘‘benign’’. Additionally, Part III variants were predicted by ToppGene (Table 2). Finally, to quantify the functional relationship, 15 genes from Category I and 14 genes from Category II and Category III genes by ToppGene p < 0.05 were visualized using STRING10 (Figure 3).

Table 1: List of selected candidate variants in Category I and Category II genes 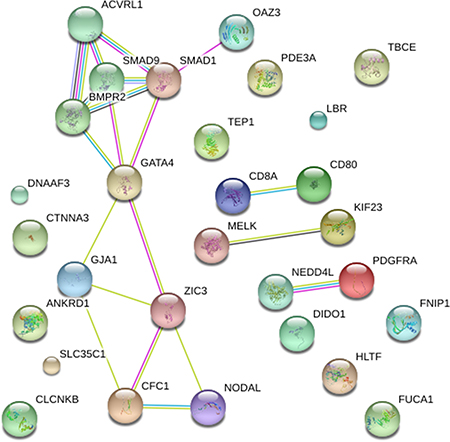 Figure 4: Sanger chromatograms of mutations. The mutation in SGCD (c.C717G) was detected in 2 discovery cases (A, B) and 1validation cases (C). The mutations in ACVRL1 (c.C652T) and SMAD9 (c.C743A) were also replicated by Sanger re-sequencing (D, E).

In our study, 18 TAPVR cases and 81 non-TAPVR controls were included to reveal the genetic etiology of TAPVR in Chinese population. We screened out candidate pathogenic variants in 6 TAPVR patients, and replicated these variants in another 12 TAPVR cases. Further results were annotated and classified into several ranks based on the functional impacts. We provided evidence for ACVRL1 as a known causative gene and for SGCD as candidate genes for TAPVR. Although potential disease-driving regions or genes (e.g., 4p13-q12, ANKRD1, etc.) in previous studies were detected, we only found few intron or UTR variants in ANKRD1 or PDGFRA in our data. It may be ethnic heterogeneity because the previous studies mainly focused on Utah family rather than Chinese family TAPVR.

A rare missense mutation in ACVRL1 (c.C652T, p.R218W) was identified as a causal mutation for TAPVR. Activin receptor like kinase 1 (ACVRL1) is a type I cell-surface receptor for the TGF-beta superfamily of ligands, located on chromosome 12q13. Johnson et al. [11] noted that the high expression of ACVRL1 in highly vascularized tissues such as lung and placenta. More than 225 mutations in ACVRL1 have been reported in HGMD (The Human Gene Mutation Database). Notably, C652T was reported in vein of Galen aneurysmal malformation (VGAM) [12]. T649G (p.T217G), G650A (p.W217X) [13–15] and G656A (p.G219H) [16] in nearby were also critical for HHT1 or pulmonary hypertension. It is interesting that we aimed at finding new TAPVR gene, but WES ultimately led to the identification a known causal variant in a different but related disease. Pulmonary hypertension is a rare lung disorder in which the arteries that carry blood from the heart to the lungs become narrowed, making it difficult for blood to flow through the vessels. All of the TAPVR patients sequenced suffered from pulmonary hypertension and mostly recovered after surgery. Therefore, we could infer that mutations in ACVRL1 may account for TAPVR.

A recurrent mutation in SGCD (c.C717G, p.D239E) was detected, which coded for the dystrophin-glycoprotein complex (DGC). Mutations of SGCD were accompanied with dilated cardiomyopathy and muscular dystrophy in Caucasians, although not previously reported on TAPVR [17, 18]. Particularly, the recent study confirmed that the c.S151A mutation in SGCD causes a mild, subclinical cardiomyopathy phenotype [19]. Notably, they were found in 2/6 discovery patients, 1/12 validation patients and not in 81 control samples. Therefore, C717G were proven more responsible for TAPVR.

In contrast to previous studies [5, 7], whole-exome sequencing has already arrived in the clinic and was a powerful tool to investigate candidate mutations for rare diseases. The FORGE (Finding of Rare Disease Genes) Canada Consortium studied 264 disorders from the 371 submitted and identified disease-causing variants for 146 disorders over a 2-year period [20]. Several limitations in our study should be concerned including sample size. However, considering the low incidence of TAPVAR in population, our study is still a good attempt. In addition, analysis only focused on variations in coding regions, information for other regions were missing (such as introns, UTR or intergenic regions) [21]. Taken together, our findings need to be further validated in functional studies or large well-designed population-based studies in the future.

A DNA extraction procedure was carried out using a QIAamp™ DNA and Blood Mini kit Qiagen™) according to the manufacturer’s protocols. Total DNA concentration and quantity were assessed by measuring absorbance at 260 nm with NanoDrop 2000c Spectrophotometer (Thermo Scientific™).

PCR Primers were designed for the target regions and were used to amplify these regions by PCR for Sanger resequencing. Mutations were validated according to the resulting data screened through Chromas 2.4.1 and Dnaman 6.0.

Widely used functional annotation tools for mutations were integrated together to evaluate the biological functions and further interactions: Transcriptome Ontology Pathway PubMed based prioritization of Genes (ToppGene, http://toppgene.cchmc.org) works by gene list enrichment analysis and candidate gene prioritization based on functional annotations and protein interactions network [25]; Search Tool for the Retrieval of Interacting Genes/Proteins (STRING, http://string.embl.de) generalizes access to protein interaction data, by integrating known and predicted interactions from a variety of sources [26].