*These authors share first authorship and are listed in alphabetical order

Cabozantinib, a c-MET and vascular endothelial growth factor receptor 2 inhibitor, demonstrated to prolong progression free survival and improve skeletal disease-related endpoints in castration-resistant prostate cancer and in metastatic renal carcinoma. Our purpose is to investigate the direct effect of cabozantinib on bone microenvironment using a total human model of primary osteoclasts and osteoblasts.

We demonstrate that cabozantinib inhibits osteoclast functions “directly” and “indirectly” reducing the RANKL/osteoprotegerin ratio in osteoblasts.

Cabozantinib is an orally bioavailable receptor tyrosine kinase inhibitor with a strong activity against c-MET and vascular endothelial growth factor receptor 2 (VEGFR2) that promote tumour progression and angiogenesis. Osteoclasts and osteoblasts also express c-MET and VEGFR2 [1–4] and secrete the only known ligand for c-MET, the hepatocyte growth factor (HGF), supporting the importance of the HGF/MET signaling axis in the regulation of bone remodelling. [5–8].

Pre-clinical studies in animal models of prostate cancer bone metastases showed that cabozantinib inhibits tumour proliferation and bone resorption, indicating that both the tumour and bone microenvironment may represent cabozantinib targets [9–11]. Moreover, in phase II studies of castration resistant prostate cancer (CRPC) patients, cabozantinib was associated with an increased resolution in bone scans, a pain relief in more than 60% of patients and a marked improvement in progression free survival (PFS) compared with placebo [12–14]. In the subsequent phase III trial (COMET-1), cabozantinib did not increase the overall survival (OS) (primary end-point) compared to prednisone. However, cabozantinib was associated with an improvement in bone scan responses at week 12 (42% for cabozantinib versus 3% for prednisone), in progression-free survival (median of 5.5 months in cabozantinib group vs 2.8 months in prednisone group) and with a reduction of skeletal related event (SRE) rates (14% among patients on cabozantinib and 21% in patients on prednisone) [15]. Recently, a phase III study (METEOR) showed that cabozantinib reduced the risk of disease progression or death compared to everolimus in patients with metastatic renal cell carcinoma (RCC) [16]. Furthermore, in a pre-specified analysis in the subgroup of patients with metastatic bone disease treated with cabozantinib (23%), a marked prolongation of PFS was observed (7.4 months in the cabozantinib arm vs 2.7 months in the everolimus arm). Moreover, SRE, in men who showed previous events, were observed in 15 of 91 patients (16%) in the cabozantinib arm and in 31 of 90 patients (34%) in the everolimus arm [17, 18].

Overall, these clinical and preclinical data support the hypothesis that bone microenvironment may represent a potential mediator of observed treatment responses, but it is not yet clear if cabozantinib acts on bone metastases directly or indirectly regulating osteoclasts and osteoblasts, or both.

Previous works explored the biological activity of cabozantinib on bone tissue using only murine models or established cell lines [19, 20]. Cell lines are helpful at the early phases of evaluating the therapeutic drugs, but they do not fully reproduce the physiology of primary cells and species-related differences could represent a drawback for the translation of the outcomes from bench to bedside [21, 22].

c-MET and VEGFR2 are expressed during osteoclast and osteoblast differentiation

Cabozantinib was administered to osteoclasts at a non-cytotoxic concentration (0,3 μM) (Supplementary Figure 2), every 3 days (from day 0 to day 12) according to other preclinical studies on murine models [11, 19, 20]. 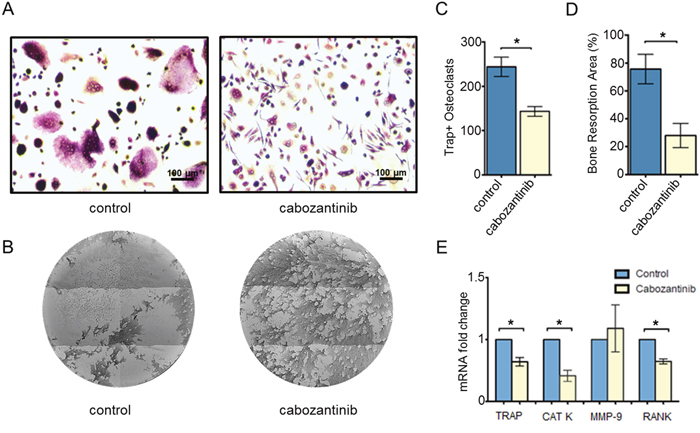 We assessed the effect of cabozantinib treatment on osteoclast activity by seeding monocytes on wells coated with inorganic calcium phosphate that mimic bone matrix and, then, evaluating the reabsorbed areas (pits) produced by mature osteoclasts. We found that cabozantinib significantly inhibited osteoclast function reducing their capacity to reabsorb bone matrix (p = 0.0252) (Figure 1C).

Cabozantinib does not influence primary osteoblast differentiation and activity

The effect of cabozantinib on osteoblasts was evaluated via treating the cells from day 21 to day 28 of the differentiation protocol at different concentrations (1 μM, 3 μM and 5 μM). Live and Dead analyses showed that cabozantinib treatment has no cytotoxic effects at these doses (Figure 2); data was confirmed by MTT assay (data not shown). No significant differences in Alkaline Phosphatase (ALP) intensity, a specific osteoblasts marker (Figure 3A-3B) or in Alizarin red (Figure 3C; Supplementary Figure 3), that stains bone matrix deposits, were found suggesting that cabozantinib did not inhibit the ability of primary human osteoblasts to differentiate and mineralize. 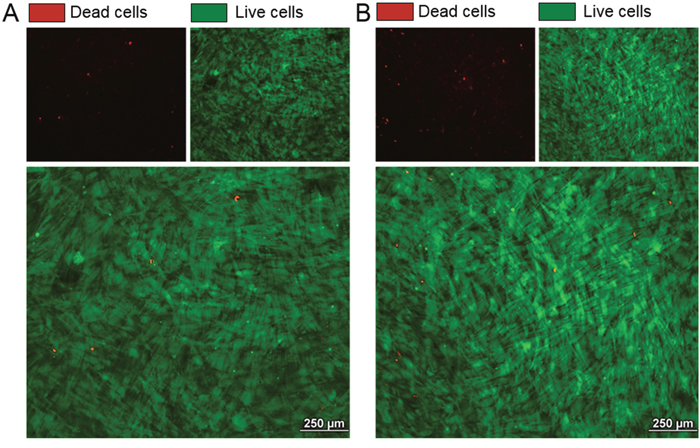 Although we did not find a significant increase of osteoblast mineralization following cabozantinib treatment, molecular analysis revealed a significant up-regulation of some osteoblastogenesis markers such as Runt-related transcription factor 2 (RUNX2) (p = 0.003) and OSTERIX (p = 0.015), a down-modulation of OSTEOCALCIN (OCN), while ALP mRNA levels did not change in treated osteoclasts. 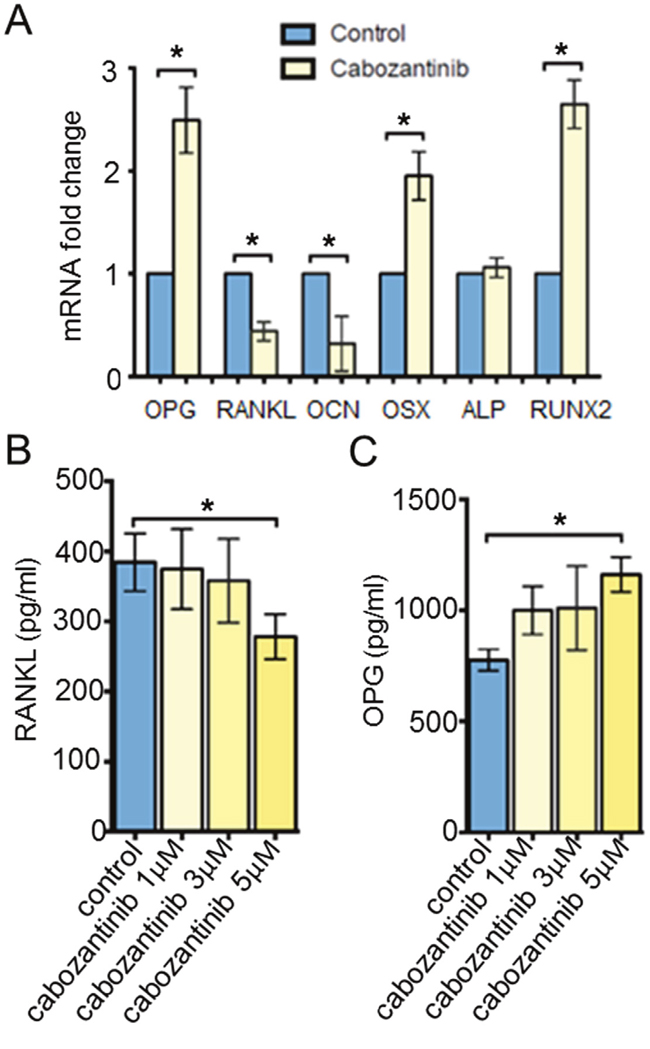 In order to confirm the role of cabozantinib on RANKL/OPG axis, we detected the amount of OPG and RANKL proteins secreted in the conditioned media (CM) of untreated or treated osteoblasts. We found that cabozantinib treatment (5 μM) inhibited RANKL secretion (p = 0.043) and increased OPG production (p = 0.004) by osteoblasts (Figure 4B–4C) [29]. 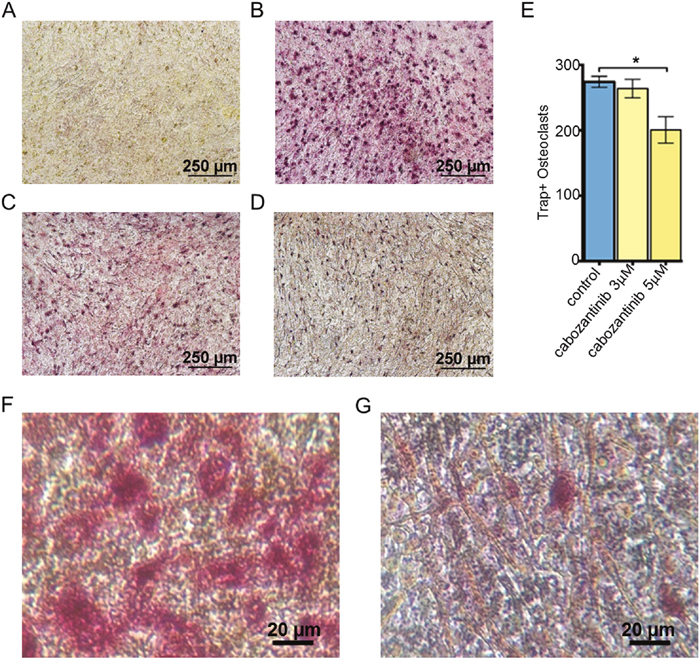 Starting from preclinical and clinical evidences, we designed an in vitro/translational study in order to investigate the biological effect of cabozantinib in our models of primary human osteoblasts/osteoclasts. Our results highlight that cabozantinib exerts a strong inhibitory action on osteoclast differentiation and bone-resorbing activity without generating any cytotoxic effect at the administrated doses. In addition, cabozantinib is able to down-modulate mRNA expression of key osteoclastic genes such as TRAP, CATHEPSIN K and RANK.

Cabozantinib does not inhibit osteoblast differentiation and bone matrix deposition, but, most interestingly, we observed a down-modulation of RANKL concomitantly with an upregulation of OPG levels following the treatment. Thus, we set up an osteoblasts/osteoclasts co-culture (cell-to-cell contact) to evaluate the effect of cabozantinib in a more physiological system. Our results show that cabozantinib pre-treated osteoblasts are able to reduce the number of osteoclasts differentiated directly on the osteoblast layer. Therefore, cabozantinib could act at multiple levels in the bone metastatic process, targeting cancer cells [10–13], bone cells and interfering with the crosstalk between tumour and bone microenvironment. In particular, cabozantinib treatment could interrupt the ‘vicious cycle’ of pro-tumour interactions between osteoblasts, osteoclasts and tumour cells inhibiting bone resorption and the release of bone matrix embedded factors that in turn stimulate tumour cells growth (Figure 6). Moreover, given the well-known role of the RANKL/OPG/RANK axis in bone metastases formation [24], cabozantinib could inhibit the cancer cells homing to bone niche and their subsequent proliferation. 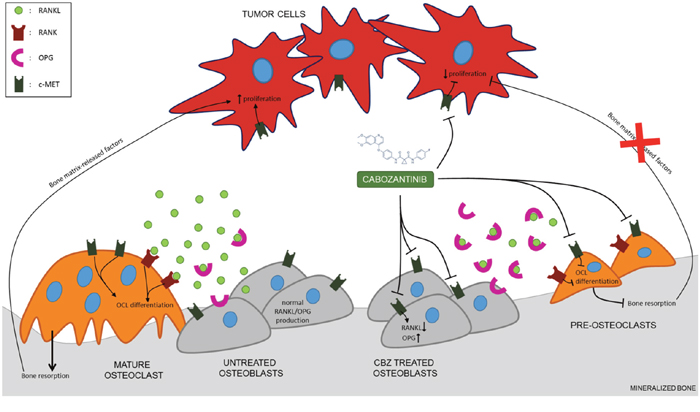 Our in vitro results provide the evidence of potential effects of Cabozantinib on both osteoblasts and osteoclasts as components of its in vivo efficacy in reducing tumour burden, prolonging skeletal PFS, decreasing new bone metastases onset and delaying the appearance of SREs as demonstrated in metastatic prostate cancer patients [12–14] and more recently, in advanced renal carcinoma [16].

From a clinical perspective, these results could represent the biological rationale to design novel clinical trials in order to investigate Cabozantinib's activity on skeletal disease-related endpoints and its potential synergism with standard antiresorptive agents [25–26] in patients with bone metastatic solid tumors.

At the end of the osteoclasts differentiation protocol (day 12), culture medium was removed and cells were fixed with 4% formaldehyde for 5 minute and stained with leukocyte acid phosphatase (TRAP) kit (Sigma-Aldrich) according to the manufacturer's instructions. Stained positive cells (>3 nuclei) were then counted. Osteoclast activity was assessed by culturing cells on plates coated with a synthetic inorganic bone mimetic matrix (Osteoassay, Corning). At day 12 the culture medium was removed and plates filled with sodium hypochlorite solution to evaluate the ability of mature osteoclasts to reabsorb this substrate; the pits produced by osteoclasts were quantified by ImageJ software [27].

On day 21, cells were fixed with 4% formaldehyde for 5 minutes and stained with an alkaline phosphatase (ALP) kit (Sigma-Aldrich) according to the manufacturer's protocol. ALP positivity was quantified by ImageJ software. In order to detect bone matrix deposition as a marker of osteoblastic activity, cells were fixed with 4% formaldehyde for 20 minute and stained with alizarin red for 1 hour at room temperature. Alizarin red fluorescence was detected at 470 nm and quantified by spectrofluorimeter (Tecan Infinite M200Pro).

Osteoblasts conditioned media (CM) of both treated with cabozantinib or untreated were collected to evaluate the soluble OPG and RANKL protein secretion levels using Human Osteoprotegerin ELISA Kit (RayBio®) and the Total sRANKL ELISA kit (ImmunDiagnostik). Then cells were harvested and counted. RANKL and OPG levels were normalized to cell numbers in each well.

Thanks to Dr Mark Leakos for proof reading the paper.

The authors of this manuscript have no conflicts of interest to disclose.

This research received no specific third-party funds or grant.