Renal cell carcinoma (RCC) is one of the most common malignant tumor in urinary system with high mortality [1]. Increased incidence was observed during the last decades [2]. Nearly 40% of the RCC patients were died from cancer progression [3]. The prognosis markers are valuable for RCC patients. However, the exact mechanisms which promote the progression of RCC are still unclear.

Accumulated evidences supported that the deregulation of cell-to-cell adhesion molecules were involved in RCC progression, which promoted tumor cell invasion and metastatic activity [4, 5]. As a calcium-dependent cell adhesion molecule, E-cadherin maintains the integrity of epithelial cells by regulating actin cytoskeleton. Reduced E-cadherin expression or mutation induced function loss of the cadherin complex, which resulted in metastasis of epithelial malignancies [6–8]. However, the clinical value of E-cadherin in diagnosis and prognosis evaluation was still unclear in RCC.

As an important member of cadherin complex, β-catenin is involved in Ca2+-dependent, cell-to-cell adhesion maintains of epithelial cells [9]. The disruption of E-cadherin/β-catenin complex activates tumor metastasis in a series of epithelial malignancies [10–13]. Moreover, β-catenin works as a key factor of canonical WNT signaling pathway. Dysregulation of WNT/β-catenin signaling results in abnormal accumulation of β-catenin in cytoplasm of cancer cells, to develop a complex with a group of transcription factors [14, 15]. Thereby elevated canonical WNT signaling targeted genes are involved in carcinogenesis and progression [9, 16]. However, the clinical value of WNT signaling dysregulation in RCC is still not clear. Here, we focused on the deregulation of E-cadherin in RCC progression based on tissue microarray analysis, as well as its potential correlation with WNT/β-catenin signaling pathway. 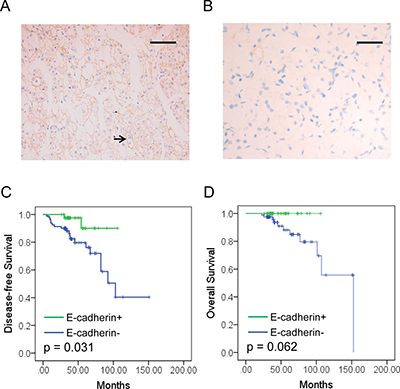 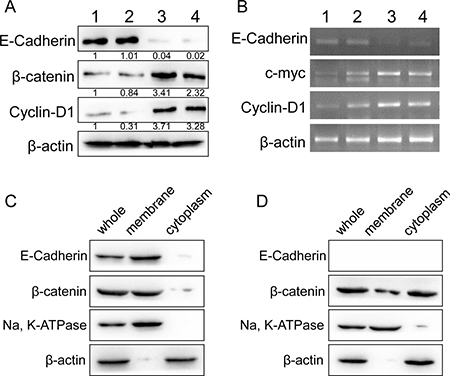 Figure 2: Correlation between E-cadherin and WNT/β-catenin signaling in RCC tissues. (A) E-cadherin, β-catenin and cyclin D1 protein levels were analyzed with western blot in four fresh RCC tissues. β-actin was used as loading control. (B) mRNA levels of E-cadherin and WNT/β-catenin signaling targeted genes was studied with RT-PCR in the four fresh RCC tissues. β-actin was used as control. (C, D) β-catenin location in E-cadherin positive (C) or negative (D) specimens were studied with immunobloting assays. Na, K ATPase was used as membrane control, and β-actin as cytoplasm control. Representative images from at least three independent experiments are shown.

β-catenin expression and correlations with E-cadherin in RCC

Another IHC staining for β-catenin was performed with TMA specimens of RCC. Positive staining of β-catenin was located in cell membrane/cytoplasm (Figure 3A, 3B and Supplementary Figure 1B). More importantly, β-catenin expression in RCC cells was decreased or disappeared in membrane (Figure 3A), whereas abnormal accumulation in cytoplasm (Figure 3B). About 71.2% of renal cell carcinoma specimens were positive for β-catenin (89/125, Figure 3C). These results provided further evidence of the translocation of β-catenin from membrane to cytoplasm in RCC. Further analysis for the correlation of E-cadherin and β-catenin expression was performed. Lower percentage of E-cadherin expression was observed in β-catenin positive specimens than negative ones (26.97% vs. 55.56%, P < 0.01, Figure 3C and Supplementary Figure 2A, 2B). Moreover, significant negative correlation was observed between β-catenin scores and E-cadherin scores according to a linear regression analyze (R2 = 0.120, P < 0.0001, Figure 3D). Our results suggested a negative correlation between β-catenin and E-cadherin expression in RCC. 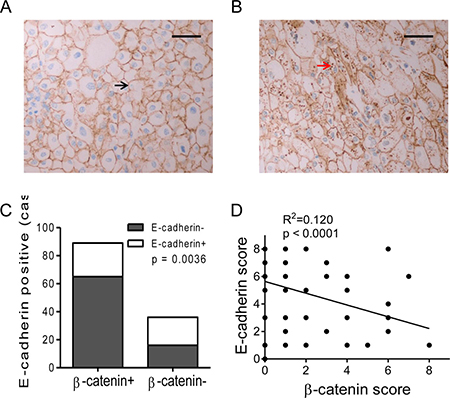 Correlations between β-catenin and clinicopathological characteristics

In RCC specimens, significantly increased β-catenin expression was observed in higher Fuhrman grade tissues than lower ones (Fuhrman grade 3–4 vs. 1–2, P = 0.030, Table 3). However, no significant correlation was observed in β-catenin expression and other variables, including age, gender, tumor size, clinical stage, histological type and necrosis (P > 0.05, Table 3). Our results suggested that the activated WNT/β-catenin signaling was a potential detrimental actor for RCC patients.

Further study was performed to study the prognostic value of β-catenin expression in RCC. Significant worse DFS was observed in β-catenin positive patients than negative ones (P = 0.027, Figure 4A). However, no significant difference was observed in OS between two groups (P = 0.074, Figure 4B). Further survival analysis revealed that E-cadherin-/β-catenin+ patients showed significant worse prognosis in both OS and DFS compared to other patients (P = 0.014, p = 0.011. Figure 4C, 4D). 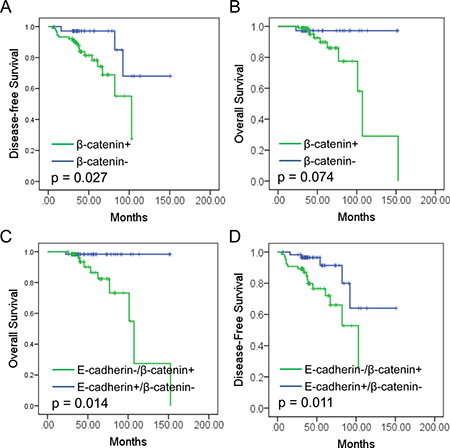 A variety of signaling pathways have already shown to be involved in carcinogenesis and progression of RCC, including PI3K/Akt/mTOR, HGF/Met and VHL/hypoxia cellular signaling [24–27]. Recent studies have also shown aberrant signal transduction of WNT/β-catenin is correlated with an aggressive phenotype [15, 28, 29]. However, the exact mechanisem of WNT/β-catenin classical pathway involved in RCC progression is still under investigation. Interestingly, previous studies and our study declared that WNT/β-catenin pathway is deregulated especially in poorly differentiated and late-staged RCCs [30, 31]. E-cadherin shows a clear membranous staining pattern, whereas β-catenin shows a cytoplasmic and membranous localization. Our study indicated that accumulated β-catenin cytoplasmic expression in the absence of E-cadherin expression in RCC tissues, which was correlated with tumor invasiveness and poor prognosis. We provided further evidence that accumulation of β-catenin was associated with advanced Fuhrman grade. Additionally, we showed that more renal clear cell carcinomas exhibited increased β-catenin expression, which was just the opposite of E-cadherin.

In the current study, we co-analyzed the clinical value of E-cadherin/β-catenin protein complex in RCC specimens. Importantly, the cytoplasmic accumulation of β-catenin protein and reduced expression of E-cadherin were associated with an aggressive biological behavior of RCCs [32, 33]. Worse prognosis was estimated for the patients with E-cadherin-/β-catenin+ RCCs, which further support that WNT/β-catenin classical signaling participated in the progression of RCCs. This event potentially explains the altered intracellular modification of the cytoskeleton protein complexes involving cadherins and the actin binding proteins during epithelial malignant progression [34, 35]. This genetic imbalance releases the metastatic process due to disruption of cell-to-cell adhesion. However, further mechanism analysis of E-cadherin and WNT/β-catenin in RCCs should be studied in the future, and preclinical studies for potential therapy targets in this signaling should be performed to improve treatment response.

In conclusion, aberrant expression of E-cadherin/β-catenin in RCCs participates in metastatic progression. Based on the corresponding gene deregulation mechanisms, there is an increasing need for developing and evaluating inhibitory targets and agents for RCC therapy [36–38]. The expression status of E-cadherin/β-catenin should be paid attention in the clinical treatment of RCCs.

Totally 125 RCC patients were involved in our study. All patients were diagnosed as renal cell carcinomas and underwent surgery between 2003 and 2010 at General Hospital of Jinan Military Region, Shandong, China. Tissue microarray was prepared with collected tumor specimens. Clinical and pathological information was collected including age, gender, tumor size, TNM stage, histological type, necrosis and Fuhrman grade. All patients were followed-up every 6 months, which was carried out by telephone interview, outpatient records or death certificate review. Fresh tissues of renal cell carcinoma were also collected for immunoblotting assays and reverse transcription PCR. Our study was approved by the Ethics Committee of General Hospital of Jinan Military Region. Informed consent was accepted by the patients according to the research proposals.

Hematoxylin- and eosin- (H&E) staining of each case was performed to confirm diagnosis and select representative area. TMA was established with representative areas of each tumor with a diameter of 2.0 mm from formalin-fixed, paraffin-embedded tissue blocks. TMA sections were prepared at 5μm of thickness for IHC staining according the following steps: deparaffinized in xylene, hydrated with gradient ethanol, antigen retrieval with 0.01 M sodium citrate for 17 minutes and immersed in 3% H2O2, incubated with 10% goat serum. Primary antibodies against human E-cadherin and β-catenin (GeneTex, San Antonio, TX) were incubated respectively at 4oC overnight. Then the sections were stained with peroxidase-conjugated avidin, followed with 3,3-diaminobenzidine tetrahydrochloride (DAB) and hematoxylin blue was used to counterstain. Assigned IHC positive RCC tissues, whose expression were confirmed by Western blot assays, were stained as positive control. Control IgG with equal concentration was used as negative control in each stain.

The evaluation of E-cadherin and β-catenin levels was performed with Allred scoring system [39]. Brown membrane staining for E-cadherin and brown membrane and cytoplasm staining for β-catenin were considered as positive staining. The score for each section was determined by staining intensity and percentage of stained cells. Staining intensity score was arranged into: 0 (no staining), 1 (weak staining), 2 (moderate staining) and 3 (strong staining). Positive percentage score was arranged into: 0 (none); 1 (< 1%); 2 (1% to 10%); 3 (10% to 35%); 4 (35% to 70%); and 5 (> 70%). The sum of intensity score and percentage score was the final score of each case. The score ≥ 4 was positive and < 4 was negative with a statistical analysis. IHC evaluation was performed by two pathologists in a blinded manner.

Fresh RCC tissues were collected and homogenized with lysis buffer, which contained 50 mM Tris-HCl, 150 mM NaCl, 1 mM EDTA, 1 mM phenylmethylsulfonyl fluoride, 1% Triton X-100, 0.1% SDS, and 0.1% sodium deoxycholate, pH 7.2. The homogenates were centrifuged at 1000 g for 10 min at 4°C. The membrane and cytosol fractions were prepared with Membrane and Cytosol Protein Extraction Kit according to the manufacturer›s instructions (Beyotime Institute of Biotechnology, China). Protein concentration of the supernatant was measured by the Bradford method. Equal amounts of proteins (20 μg) of each sample were separated on 9% SDS-PAGE and electroblotted on polyvinylidene fluoride membranes. Blocked membranes were incubated overnight at 4°C with antibodies against E-cadherin, β-catenin cyclinD1 (GeneTex, San Antonio, TX), Na, K-ATPase (Abcam Inc., Cambridge, MA) and β-actin (Cell Signaling Technology, Beverly, MA) , respectively. The membranes were probed respectively with HRP-conjugated secondary antibodies (1:4,000) at room temperature for 1 h. Immunoreactive protein bands were visualized by use of an enhanced chemiluminescence detection system (GE Biosciences, Buckinghamshire, England) according to the manufacturer’s protocol.

The relationship between E-cadherin and β-catenin expression and clinicopathologic parameters were analyzed using a two- tailed Chi-square test or Fisher's exact test. The correlation between E-cadherin and β-catenin expression status was analyzed with the Spearman's rank test. Survival estimation was performed with the Kaplan-Meier method and log rank test. Univariate or multivariate analysis of prognostic factors was analyzed with Cox proportional hazards regression models. All statistical analyses were performed using the SPSS software system (version 19.0; SPSS, Inc., Chicago, IL, USA). P < 0.05 was considered to be statistically significant.